Posted by The Hungry Traveller on 05:30 in Food Germany Travel | Comments : 0 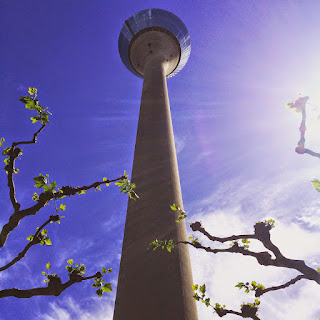 Whilst living in Germany, I’m trying to see more of the country. So when a long bank holiday weekend loomed I booked train tickets to Düsseldorf and Cologne.

Up first was Düsseldorf.  This is the 7th most populated city in Germany and is an international business / financial centre as well as being known for it’s fine arts. 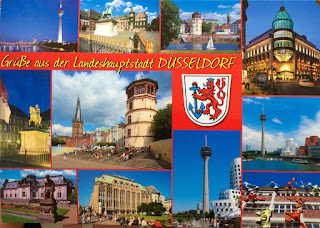 From the main train station it was easy to walk to the ‘Altstadt’ (Old Town). The city is pretty compact and easy to explore by foot.

Walking along the river promenade, is a great way to see Düsseldorf’s skyline

Burgplatz - the central square which was formerly home to a baroque palace which burned down in 1872, all that is left is the tower

Market Square, in front of the City Hall - featuring the status of Elector Jan Welles

Bolkerstrasse, in the heart of the Old Town, is also known as the longer bar in the world - the pedestrian street is lined on both sides with bars and restaurants

Typical souvenirs include mustard, for example from this old fashioned Gewuerzhaus (spice house) where they have the local mustard (ABB) in hand-decorated ceramic jars

“Rheinturm” (Rhine Tower) - get the lift up to the viewing platform for great views over the city.

I love a good market - so wandered here for a while, working up my hunger for breakfast!

I grabbed a fruit pot for later on in the day.

I parked myself outside on the edge of the square at Otto Bittner for a delicious meal.

The city has lots of gorgeous cobble-stoned streets like Hohe Strasse and Bilkstrasse, full of lots of speciality shops, bookstores, galleries and local designers.

Düsseldorf has a large Japanese community and pays tribute to this with a beautiful Japanese garden and the EKO House - the only Buddhist Temple in Europe.

Of course I needed to sample some ‘local’ food. As it was a sunny day I headed to “yomaro” - drawn by the many (happy) people surrounding it, and treated myself to a deliciously fruit fro-yo

Unfortunately I wasn’t a fan!

But I did like the city overall...wandering around finding different (and occasionally random) things to look at...

After a whirlwind couple of days, I headed onto Düsseldorf’s rival city, Cologne.