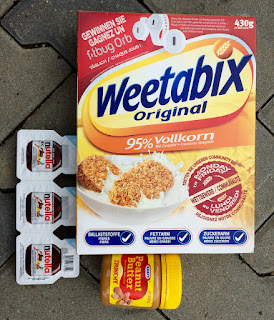 With Lisa still lagging behind in the foodie challenge scores (6 to me, 3 to her) we agreed on our second in-person competition.

We decided on dry Weetabix accompanied by a layer of crunchy peanut butter and topped with a layer of Nutella. To win, all you had to do what eat the whole thing before the other person.

We had a five-hour drive back to Munich from Zurich so used it as a mid-point to boost our energy levels during the journey home ... on a service station kerb! 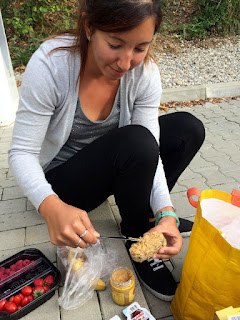 And then it was race-time:

It was one of the driest things I've ever eaten - the cereal sucked all the moisture out of your mouth and the peanut butter glued itself to the roof of your mouth.

But it was delicious!


You can see us both realising during the video did the other might win and our competitive sides kicked in! Fortunately bringing me to victory once more ... scores now at Rachel. 7: 3 Lisa.

The next challenge is already booked in skype!

After the competition, we decided to reward ourselves with more nutella / peanut butter snacks... 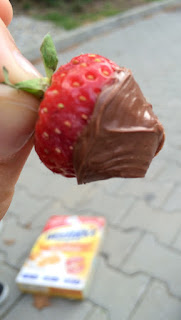 Which went a little downhill when we introduced tomatoes and cheese into the mix... 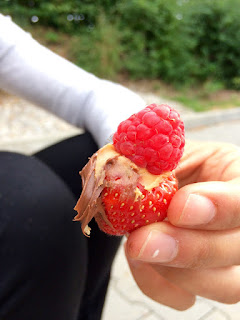