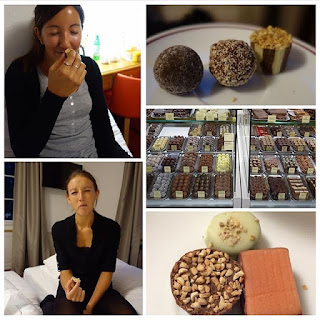 My friend Lisa and I have been doing foodie challenges since we met in Mexico at the end of last year. As she lives in Australia and I'm in Germany, they've largely completed over skype...see here for full details!

For our 10th foodie challenge we were reunited in Zurich, so of course, we had to make it a chocolate-themed challenge! 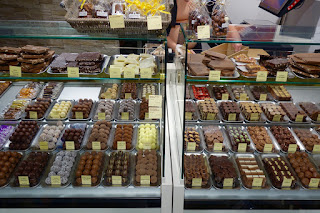 That night we settled down to the (tasty!) Task. Laying out the chocolates on a plate and covering them with a tissue (in case the appearance gave it away) we handed over our purchases to the other. 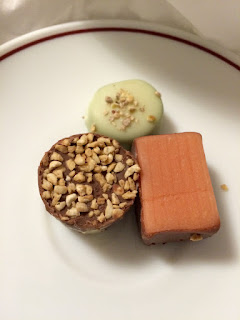 Lisa went first ... she closed her eyes and then felt around for chocolate # 1.

She sniffed it before taking the allowed two bites and then guessing correctly 'creme brule'.

My turn next and I followed the same approach, guessing correctly 'pistachio'.

Round 2 and we both guessed correctly again (Lisa with coconut and me with 'creme brule' - we'd both picked the same one!)

So we called it a draw, no points allocated and decided to have a second challenge the following day!