Mexico: Getting to Cancún

Posted by The Hungry Traveller on 22:28 in Central America Travel | Comments : 0 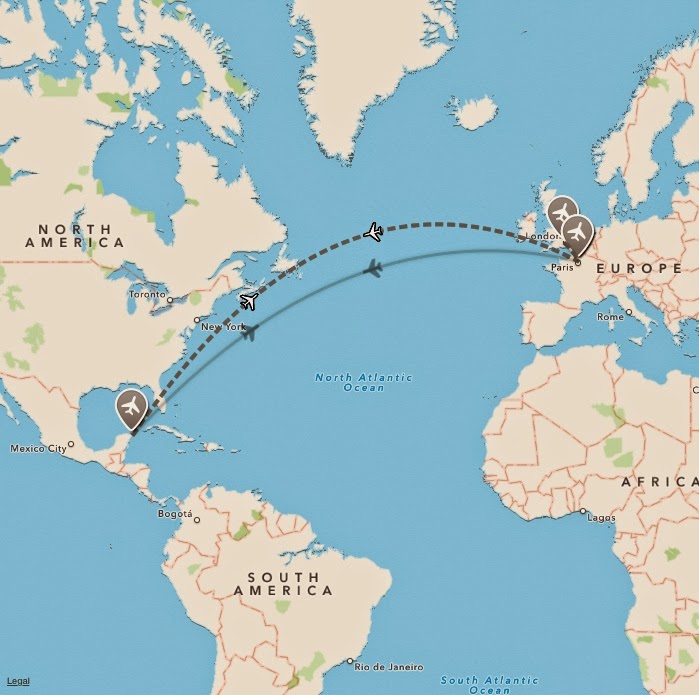 Almost as soon as Christmas 2014 was over, I hopped on a plane to Central America! I love going away at the end of December / beginning of January. You miss all the post-Christmas blues, the depressing start of January and back-to-work feeling and instead soak up some sun and escape from the wintery gloom.

So I found myself on a plane to Mexico, via Paris with hundreds of hyper kids on their way to Euro Disney…and just to finish off the seat-kicking, squabbling drama, the child behind me decided to throw up down the back of my seat as we landed into Paris – delightful!

It could only get better…or so I thought! Next up was the Paris to Cancún flight – which then proceeded to sit at the airport for another 2 hours due to technical issues! Finally we were underway but I had possibly the coldest seat in the entire plane – and an entertainment system that refused to switch from French to English…cue lots of dozing and listening to music.

So I was delighted to eventually land in Cancún airport. The airport was complete chaos – six USA flights had landed at the same time as my delayed plane and there were hundreds of people everywhere. I had my backpack searched by security and wearily wandered towards the shuttle service. More chaos greeted me as multiple long lines stretched as far as I could see, with no-one quite sure what each queue was for! Eventually I found someone who put me into a shared SuperShuttle taxi (far more economical on the travel budget!) and I was on my way to my hotel, via six others on route. I gazed out the window at the massive all inclusive resorts and brightly lit centre as we headed out towards my group hotel.

I got there about 9pm, after about 21 hours travelling, and missed my GAdventures group meeting which was scheduled for 6.30pm that night. No problem – my roommate was in our room and let me know we were leaving Cancún the next morning at 6.30am to head off to Chichén Itzá!

Knackered, I crashed into bed ready for the next day’s adventure!

Definitely not my favourite 'getting to a holiday' trip but I'm sure some of you have had far more disastrous ones - want to share?!