Posted by The Hungry Traveller on 08:02 in Europe Germany Travel | Comments : 0 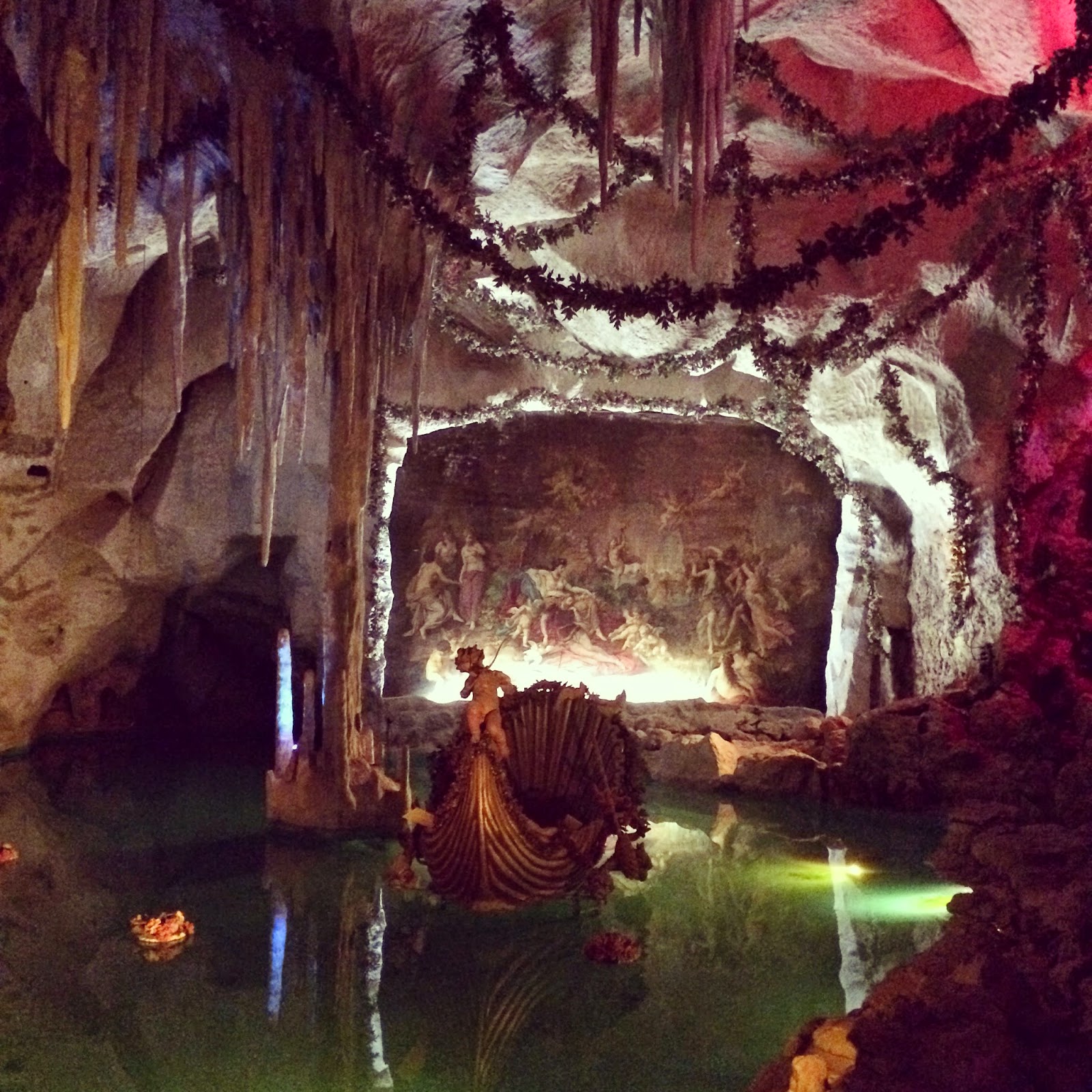 Another weekend in Bavaria - another palace by King Ludwig II!

This time I headed off to Linderhof Palace (“Schloss Linderhof”) - the smallest of the three palaces the (mad) king had built and the only one completed in his lifetime.

You can read about my trips to Ludwig’s other palaces here: Schloss Neuschwanstein and Herrenchiemsee Neues Schloss.

The palace is in Ettal southwest Bavaria, near the Austria Alpine border (approx 90mins drive from Munich). Despite the glowing weather forecast, there was heavy cloud on my journey there, but as soon as I arrived at the palace the skies cleared.

Ludwig started work on Linderhof in 1868, when he was already working on Neuschwanstein and redoing rooms at the Munich Residenz. Ludwig knew the area, from hunting trips with his father, and decided to create another palace on this site, again inspired by the French King Louis XIV who he idolised.

As with the other palaces, you have to book a space on a tour to view the inside and no photos are allowed. Although the palace is small, there are still (smaller) versions of impressive elements - e.g. the famous Versailles Ambassador’s staircase and a Hall of Mirrors. Ludwig saw himself as a ‘Night-King’ (to Louis’ Sun-King image) and would often sleep all day and stay awake all night. 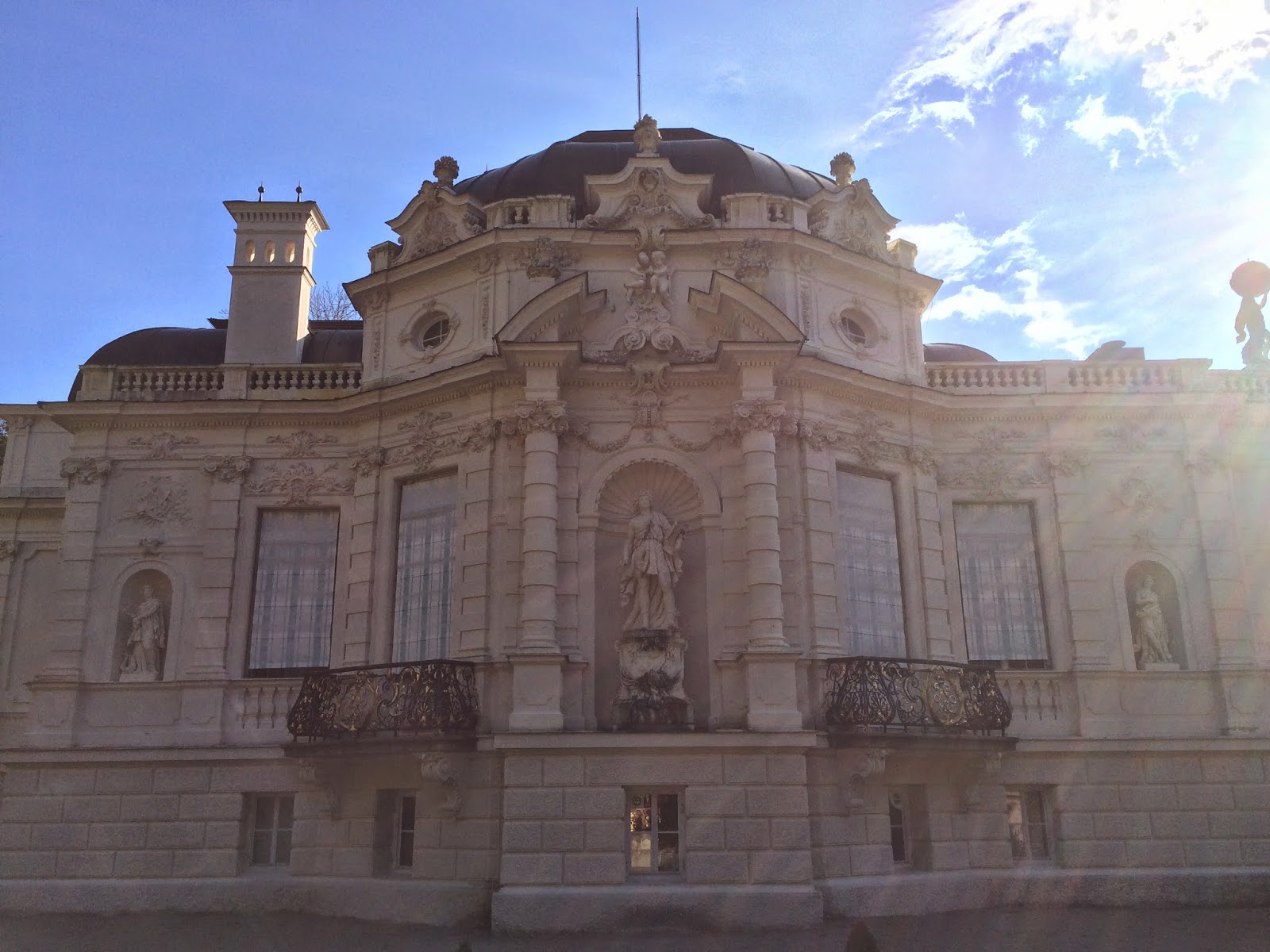 The interior is full of decadence throughout - e.g. ivory candelabras, carpets from ostrich plumes and porcelain centrepieces with china flowers.

There was also ‘modern’ technologies, such as central heating and a table that could be raised from the underground kitchen directly into the dining room. Though he dined alone, the king always had the table set for at least four people because he talked to imaginary people (such as Marie Antoinette or Louis XV).

After my tour I headed out to explore the beautiful gardens around the palace. In total they cover approx 125 acres but fit well into the natural alpine landscape and have a number of hidden treasures scattered around.

The formal gardens immediately around the palace are made up for five sections, decorated with sculptures and plants:

Water - the front of the palace is dominated by a large pool and gilt fountain. The water jet is almost 25 metres high!

South - the terraces here match the northern cascade. There is a ‘Naiad’ fountain and water nymphs plus statues of Marie Antoinette and Venus. 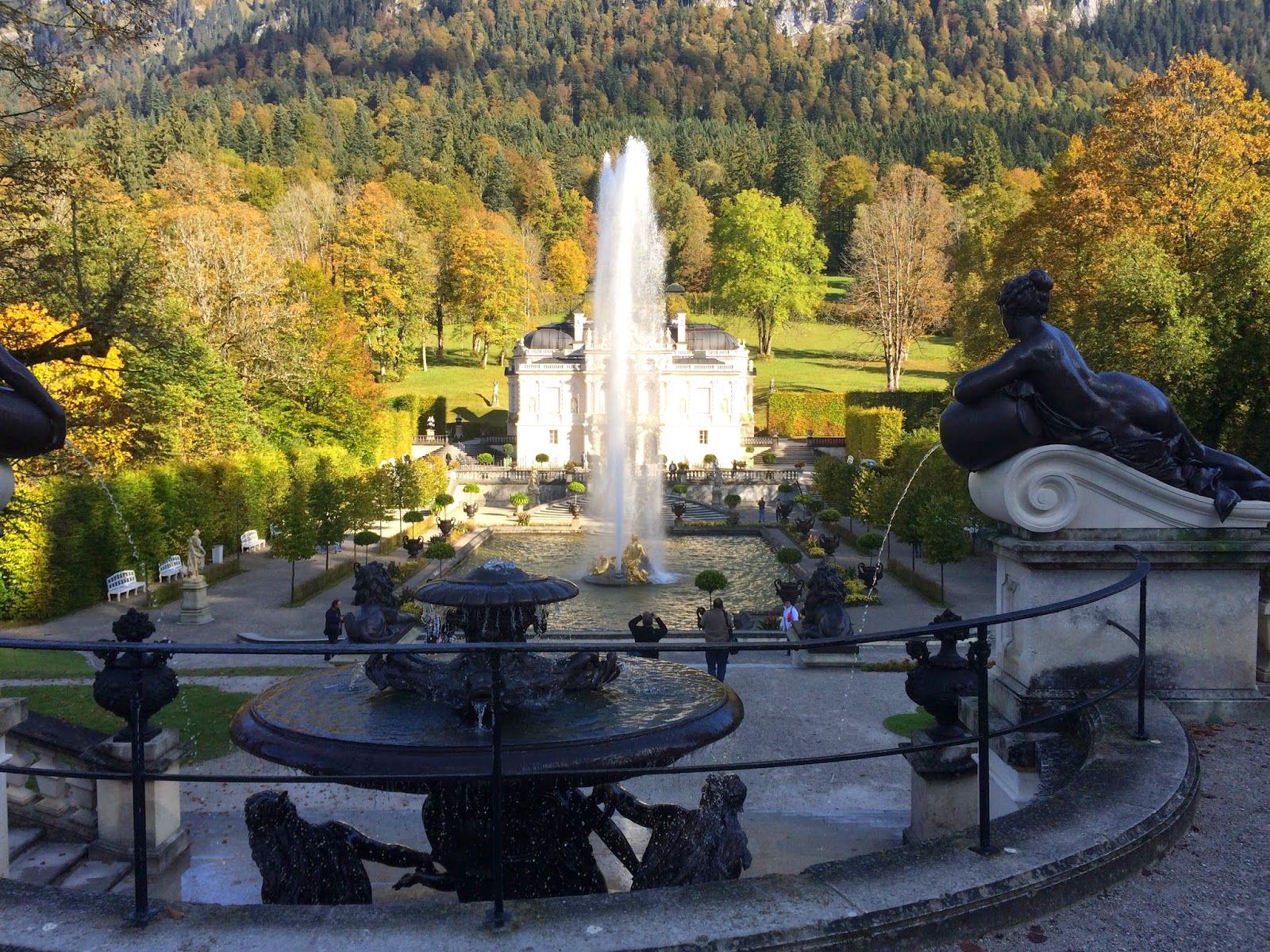 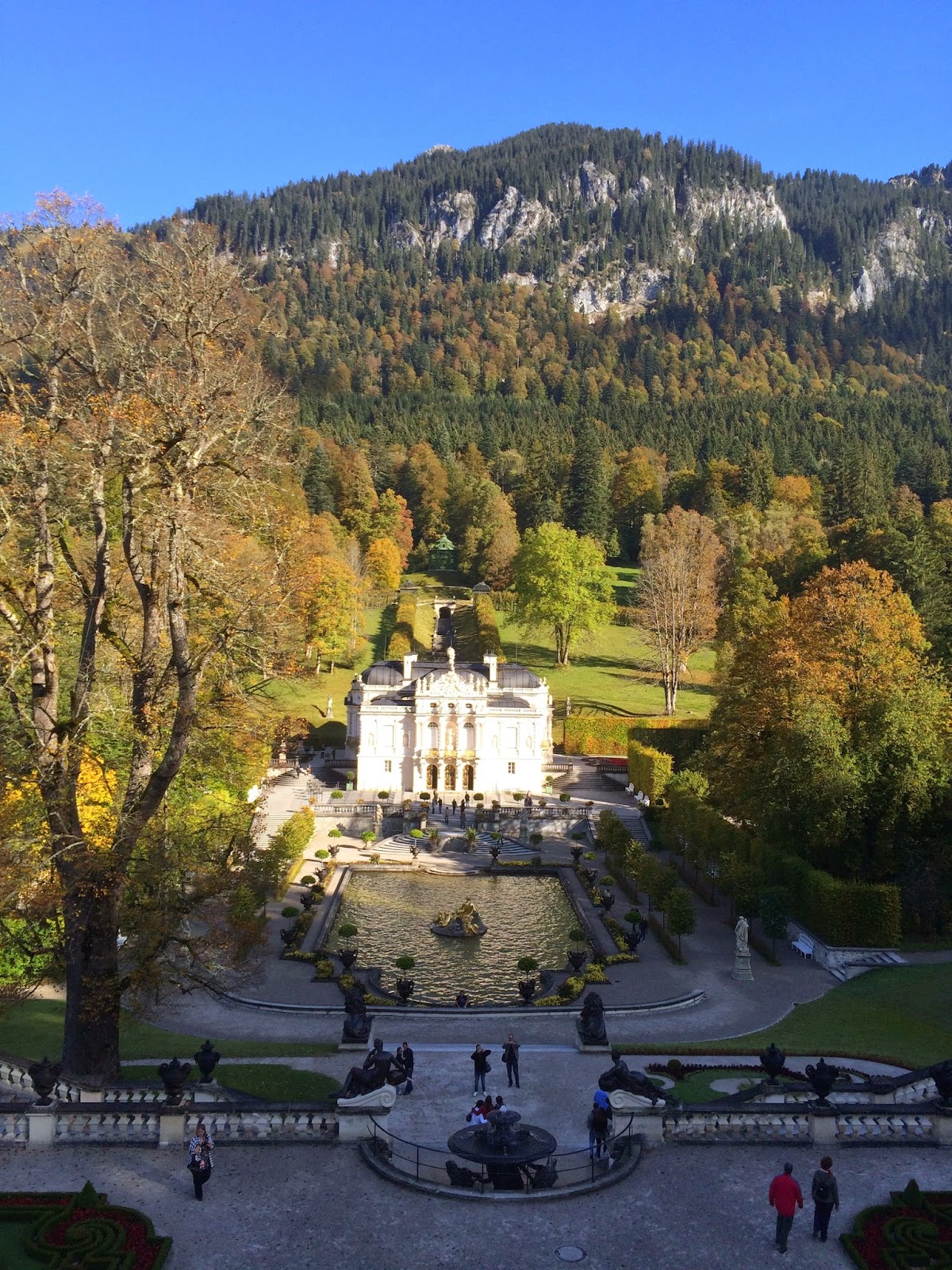 I also visited the ‘Venus Grotto’ - a completely artificial underground cave and lake built to illustrate a scene from Richard Wagner’s opera.

Ludwig enjoyed being rowed over the lake in his golden swan boat. 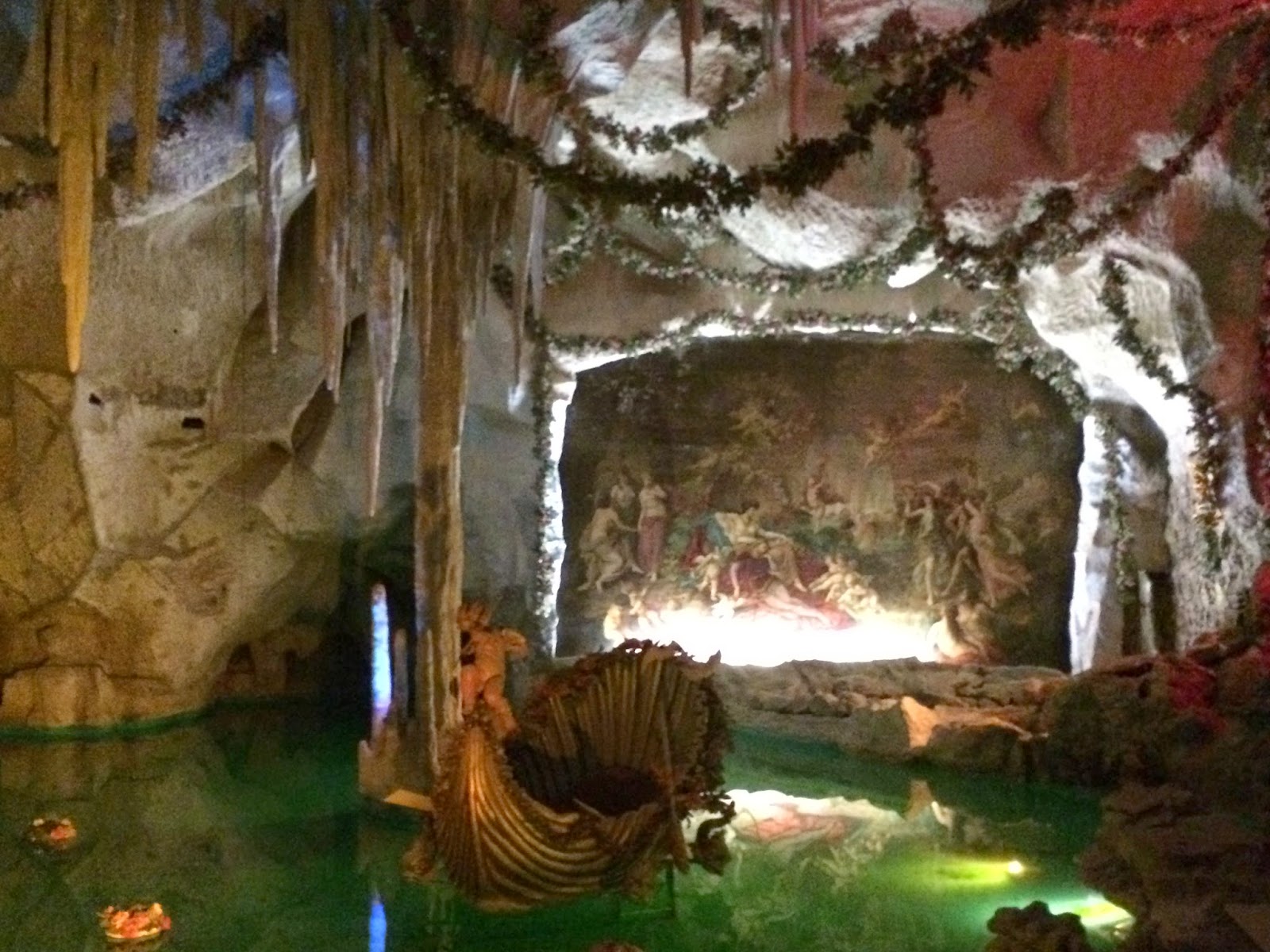 He also had the grotto illuminated in lights that could change colour!

The final stop on my exploration was the ‘Moorish Kiosk’ - a pavilion that Ludwig bought from a Berlin architect, featuring a peacock throne. 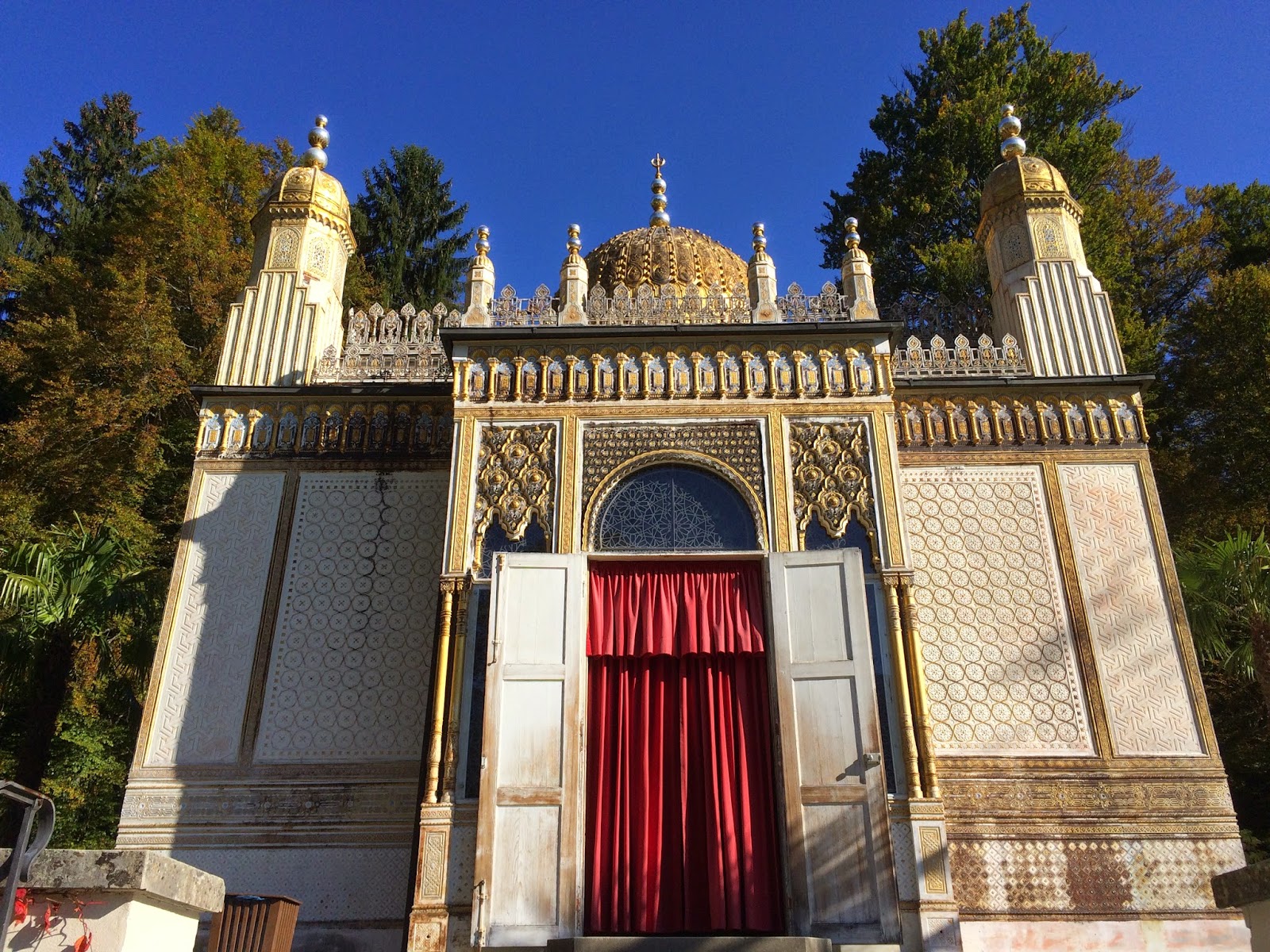 Then, after strolling around the sunny grounds for a little more...

...I climbed back in the car and headed back to Munich, into the grey clouds once more.