It was time to leave the beautiful Mediterrean behind today as we headed inland to the famous white cliffs of Pamukkale.

The winding, never-ending Singh roads didn’t go down well with my motion sickness so I was pleased everytime we stopped at a service station!

Delighted, after over 5 hours of driving, we spotted the white cliffs and arrived into Pamukkale.

These famous travertines are 2,700m long and 160m high. They are formed when the minerals from Pamukkale’s 17 hot water springs harden over time. Explanation by Wikipedia:

“Apart from the slightly radioactive minerals, the calcium and hydrogen carbonate react to create calcium carbonate (also known as travertine) and limestone. This is what gives Pamukkale its whiteness and created the pools.” 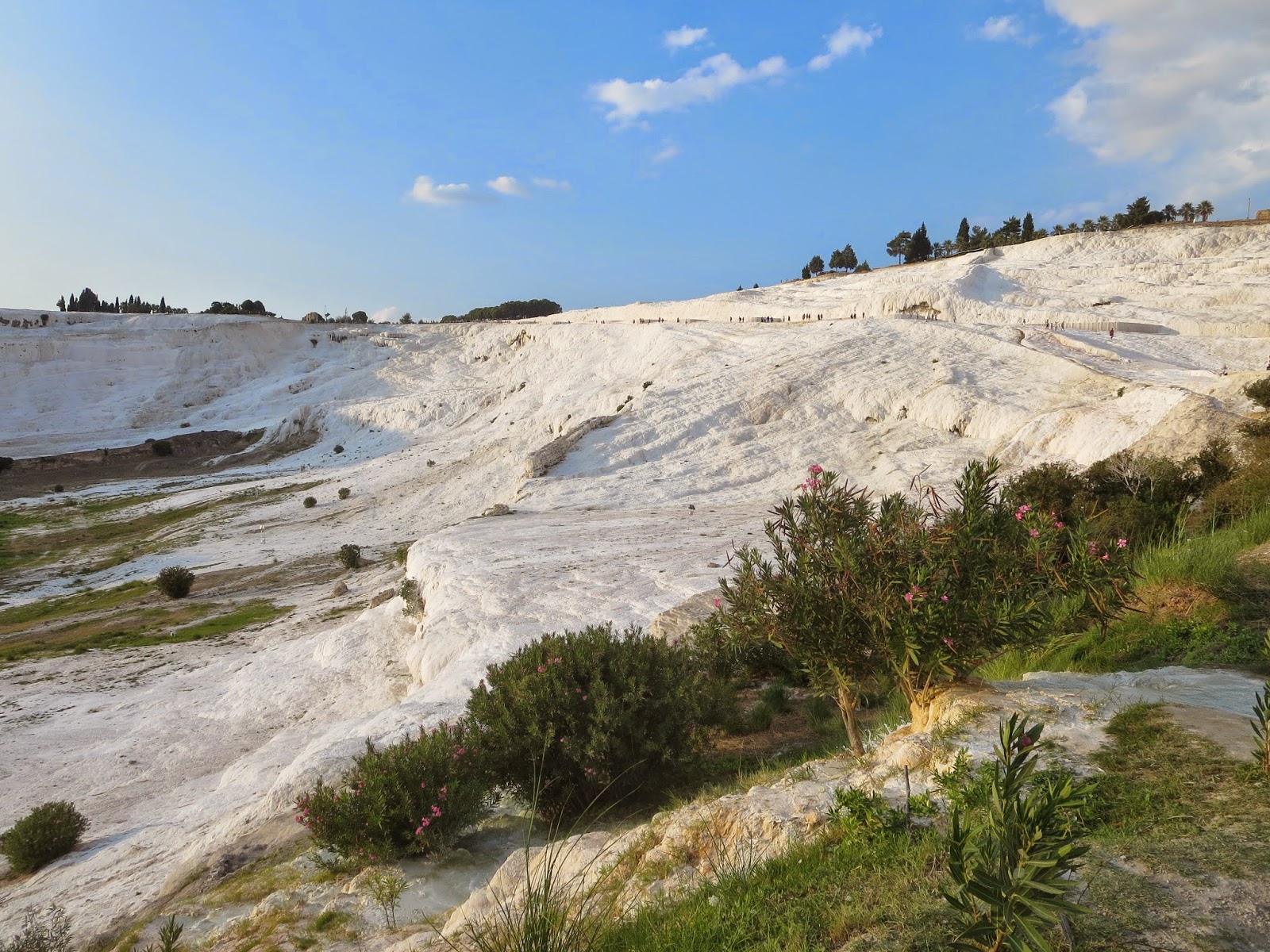 
Next to Pamukkale is Hierapolis (literally ‘Holy City’) which is also a UNESCO Site.
This ancient city has well-preserved Greco-Roman ruins, including baths, temples, arches, library and a 12,000 seat theatre…

…as well as being home to a large necropolis (cemetery). A lot of visitors to the spa retired and / or died there and there are plenty of impressive sarcophagi to wander through – including Marcus Aurelius (the last of Rome’s ‘five good emperors’)

After walking through the ancient ruins we were excited to be approaching the calcium cliff pools!

There is an ancient natural swimming pool (complete with sunken roman ruins!)

We walked along the top of the cliff to get views down and over the travertines.. 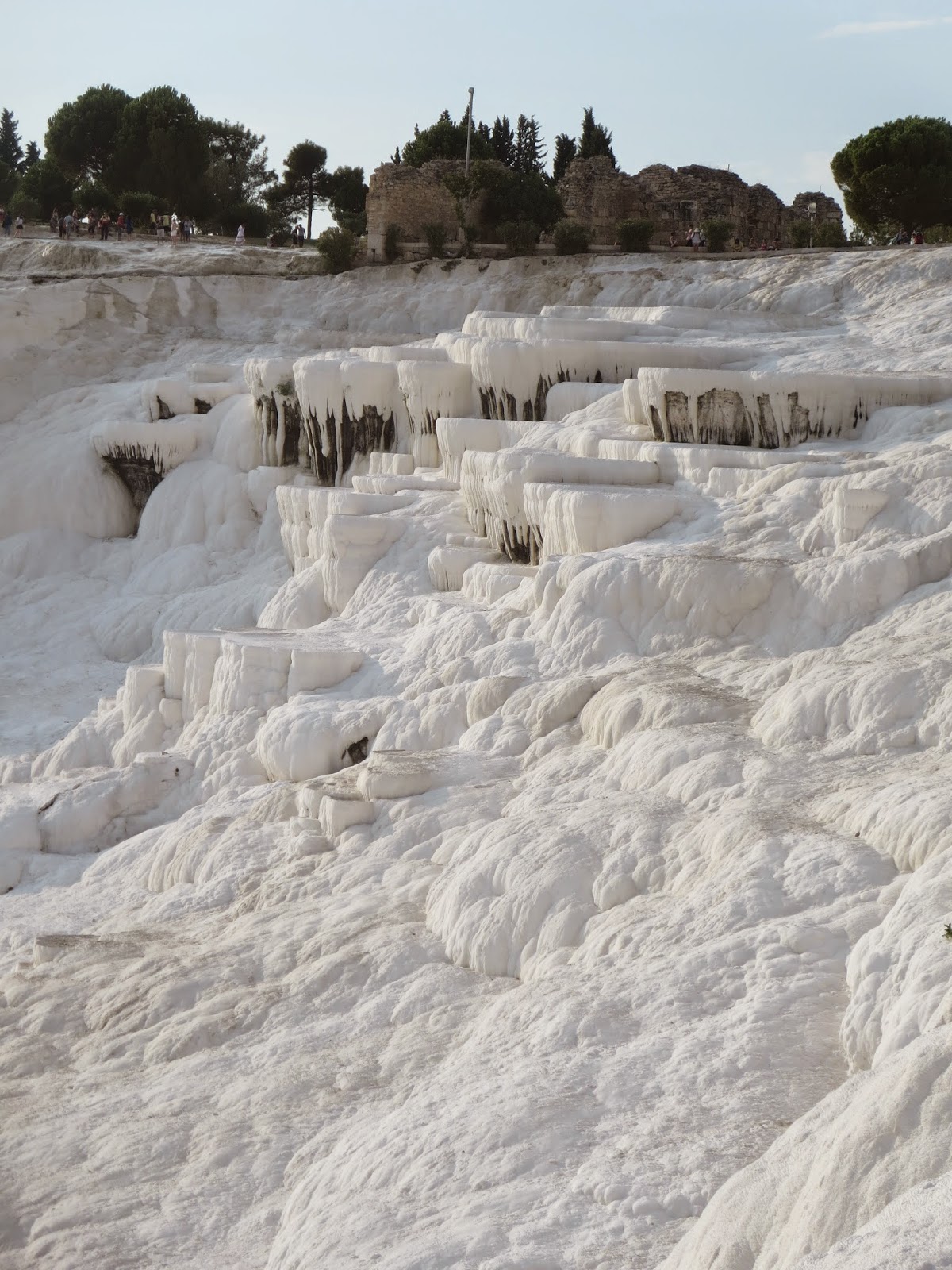 Unfortunately we were there whilst they were doing a lot of repair work so a lot of the water was diverted away from the pools so we didn't have the iconic visual, but it did mean we could see the varying patterns in the deposit build-up. 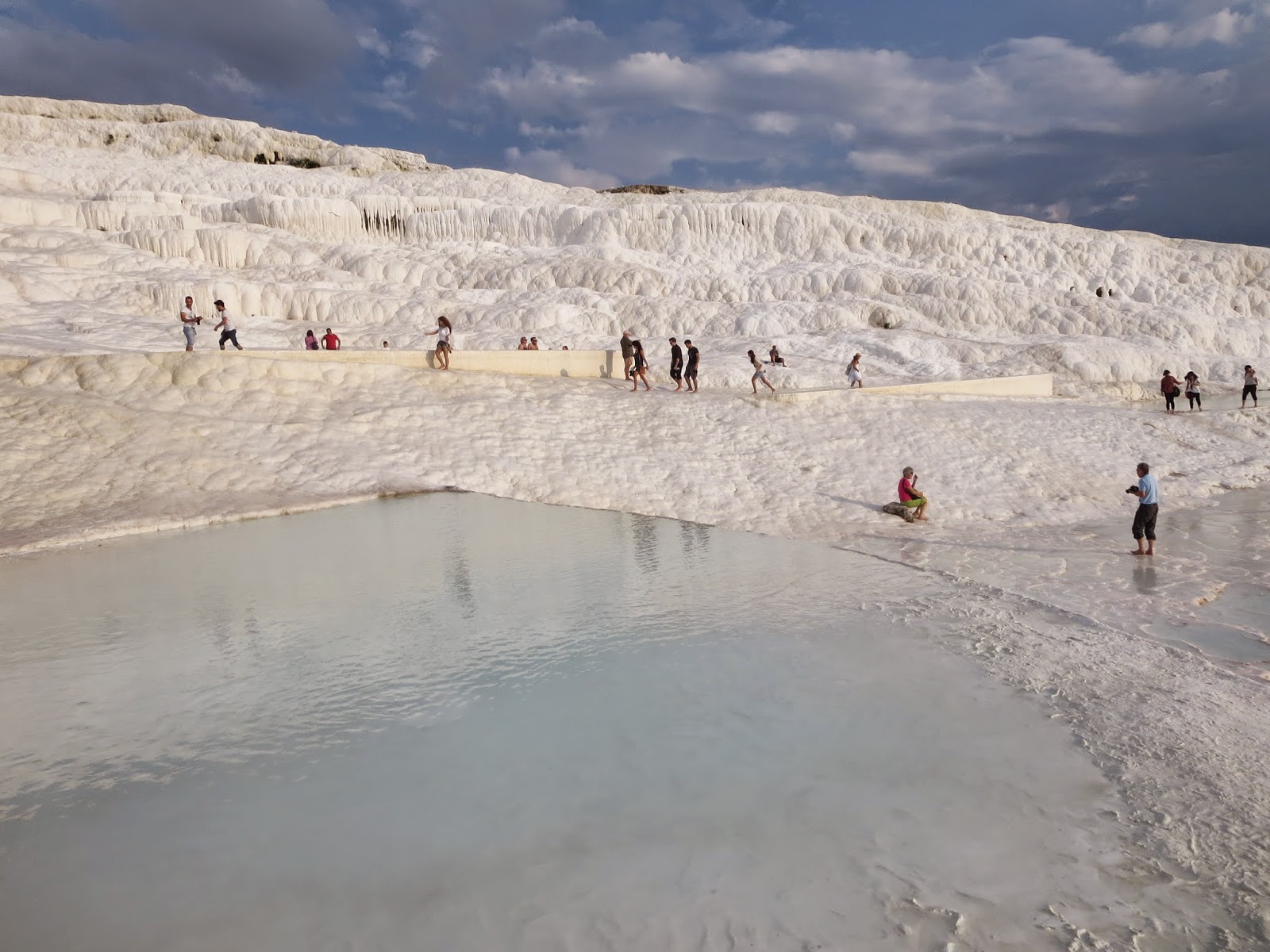 Before removing our shoes (adhering to the pollution control regulations) to walk barefoot down towards the town.

There is a strange mud-like feeling to the calcium deposits - it starts as a jelly substance before hardening and is oddly therapeutic to squish your feet into!

As the sunset, we waded through the 'hot' water (the few water-filled pools seemed to be on the cooler side of the 35'c - 100'c range!)

We wandered back to our hotel for a buffet dinner (there isn't really anything in the town) before heading out to see the rolling dervishes.

We sat in a small theatre-style room and quietly watched this religious trance sect of Islam.

...and hypnotic with the relaxing pipe music and singing.

The meditative practice is down to enable the practitioner to reach religious ecstasy.

It takes approx 1 year to train and boys can start from 12 years old.