The road to dorado (the fish, not the place / plaice!)

Posted by The Hungry Traveller on 12:49 in Asia Food Travel | Comments : 0

Though I’m always excited by food, even I was getting weary of the repetitive Turkish breakfast after 2 weeks of non-stop boiled eggs, cucumber, bread – plus cheese and olives which I don’t eat! So a couple of us headed out into Selçuk town and had a non-hotel breakfast.

We found tables near the aqueduct amongst groups of random men in the streets.

We picked a couple of random breakfast items to sample alongside our Turkish coffee.

A flat borek with ricotta-style cheese

A brioche type of roll with more cheese

Then it was time to get the bus to Ayvalik. It took hours due to traffic, so our mid-point stop was actually a lunchbreak. I treated myself to freshly squeezed orange juice – deliciously refreshing – and an apple cake slice – deliciously tasty!!

We finally arrived in Ayvalik in the afternoon. This Aegean seaside town looked almost Croatian from above with little lanes and terracotta roofs!

We were staying in a ‘pansiyon’ – a former French colonial embassy building which has been converted into a family-run accommodation…check out the beautiful interior!

This charming town is a maze of cobbled streets, old Ottoman architecture and an attractive harbour.

It faces the Ayvalik Islands (the largest of which is Cunda) and also the Greek island of Lesbos.

Whilst this town has been around since prehistoric times, its population was almost completely Greek until 1922 (the end of the Turkish War of Independence). The local food is largely Greek and Cretan fusion as a result of this influence.

We wandered through the lanes to have lunch of ‘toast’ (toste) which is essentially a Panini style toasted bread stuffed (and I mean stuffed!) with mayo, ketchup, pickles, hotdog, spiced sausage, Russian salad and tomato…a real feast!

This narrow coastal town is surrounded by pine and olive-tree covered hills…olive products are a popular purchase here!

...stumbling along a fab antiques area...

Then we arrived at the food section! A massive fruit and veggie warehouse which I was very happy to take my time walking through!

All this walking meant we built up a bit of an appetite and we excitedly headed, like kids, to an ice-cream stall on the seafront to treat ourselves to a mulberry and mastic ice-cream (local specialty flavours!) 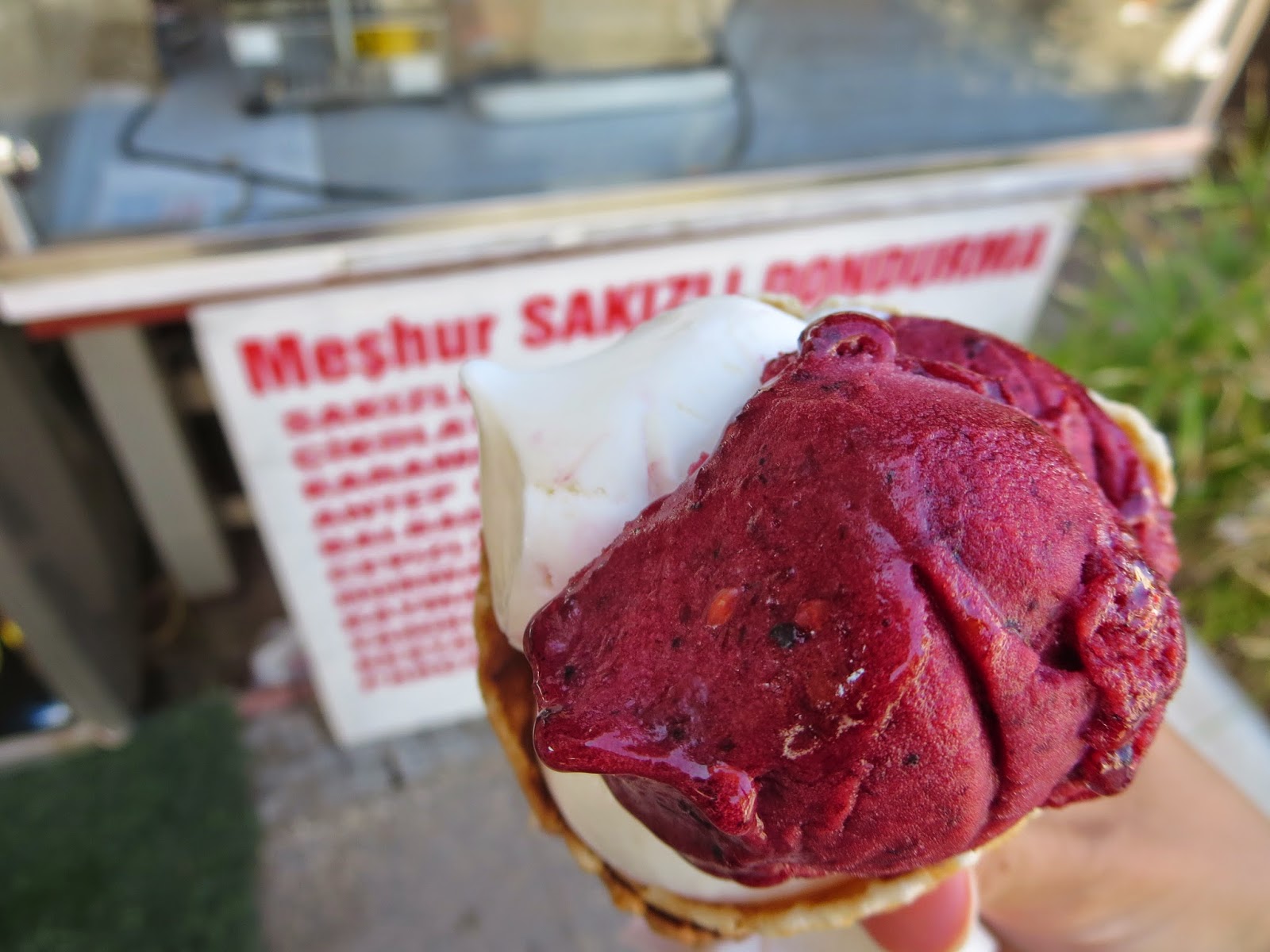 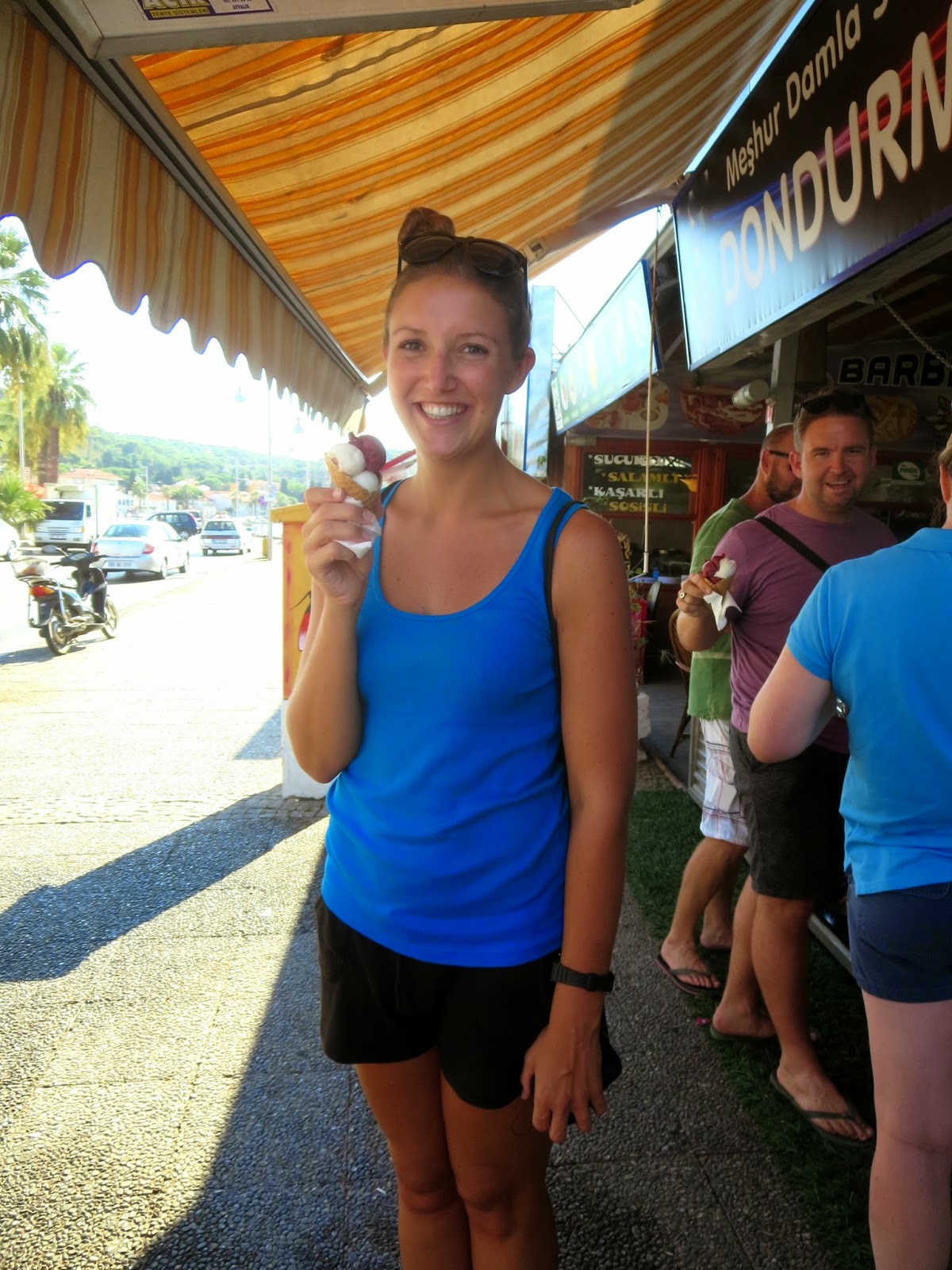 The mulberry was delicious…the mastic, less so!

We sat on the harbor front, dangling our feet over the water and watching the sun glistening on the water and boats around us – perfect!

Heading back to our pansiyon to refreshen up, we played a little backgammon in the chillout area…I wasn’t getting any better!

In the evening we caught a boat from the harbor over to Cunda Island. The island is actually connected to the mainland via a bridge and causeway that was built in the late 1960s, but there is something about travelling by boat that just screams ‘holiday’!

Perfect timing as well, because we caught the setting sun…

…we headed to a recommended waterside place (Meze Dunyasi), with a stunning view:

For a delicious seafood dinner: meze...

...topped off with a random cheese-fruit dessert.

All with a very captive audience!

After a little post-dinner stroll...where we spotted a man walking his sheep, as you do!

We grabbed a ferry boat to the mainland.