Posted by The Hungry Traveller on 20:42 in Europe Food Travel | Comments : 0

Sunday morning and I was keen to explore more of Istanbul. I helped myself to the hotel’s buffet breakfast…which would be largely the same breakfast for the next 2 weeks. Unfortunately the majority of Turkish breakfasts are olives and cheese, neither of which I’m particularly fond of but located some melon, eggs and yoghurt instead and ate on the hotel’s rooftop.  Check out my view! 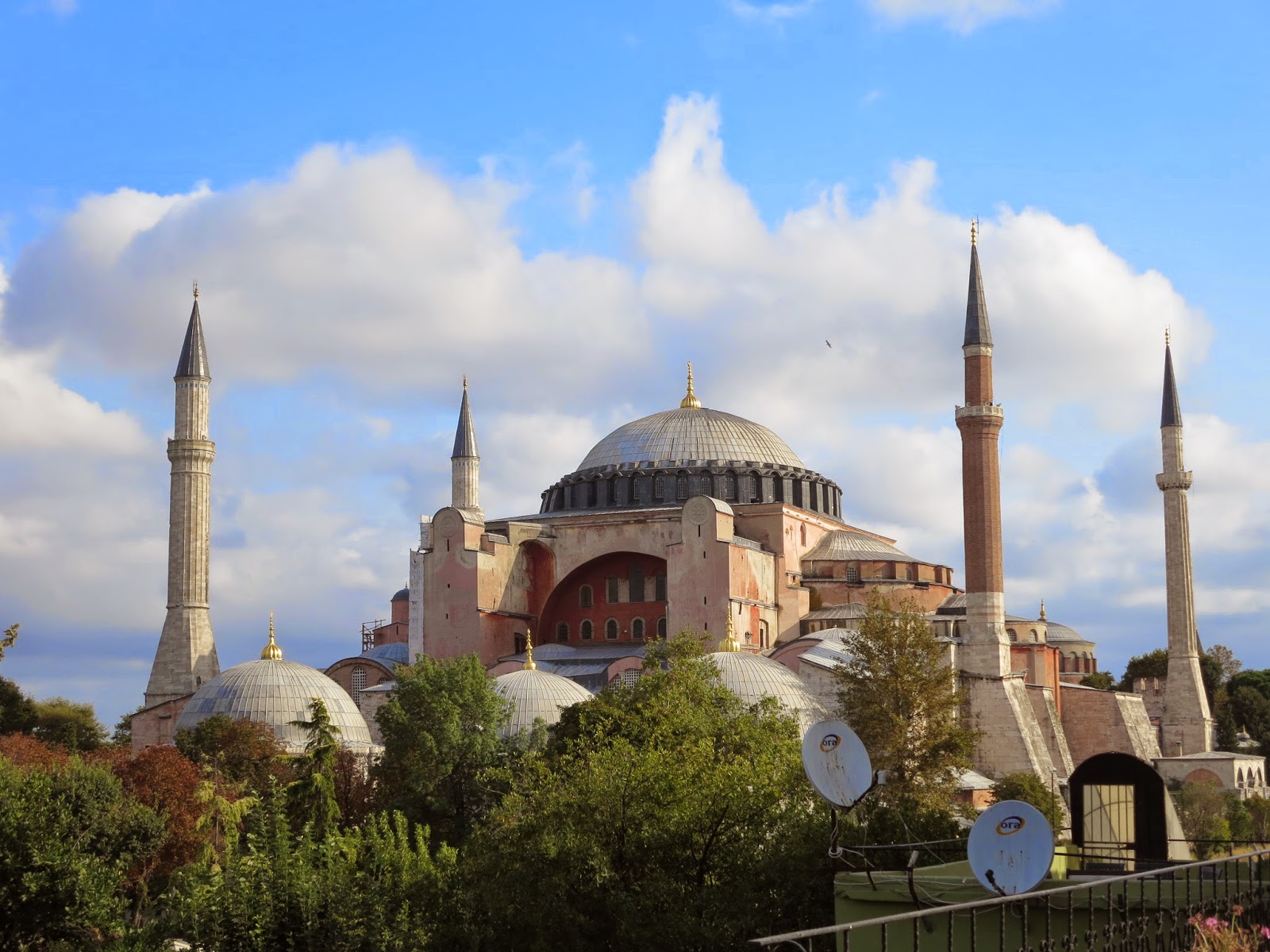 Fuelled up I headed out to the Sultan Ahmed Mosque (aka “the Blue Mosque”). You have to be careful when you want to visit the mosques as you’re not allowed in during prayer time and also make sure your knees, shoulders and head are covered (there are booths providing you loan items if needed). 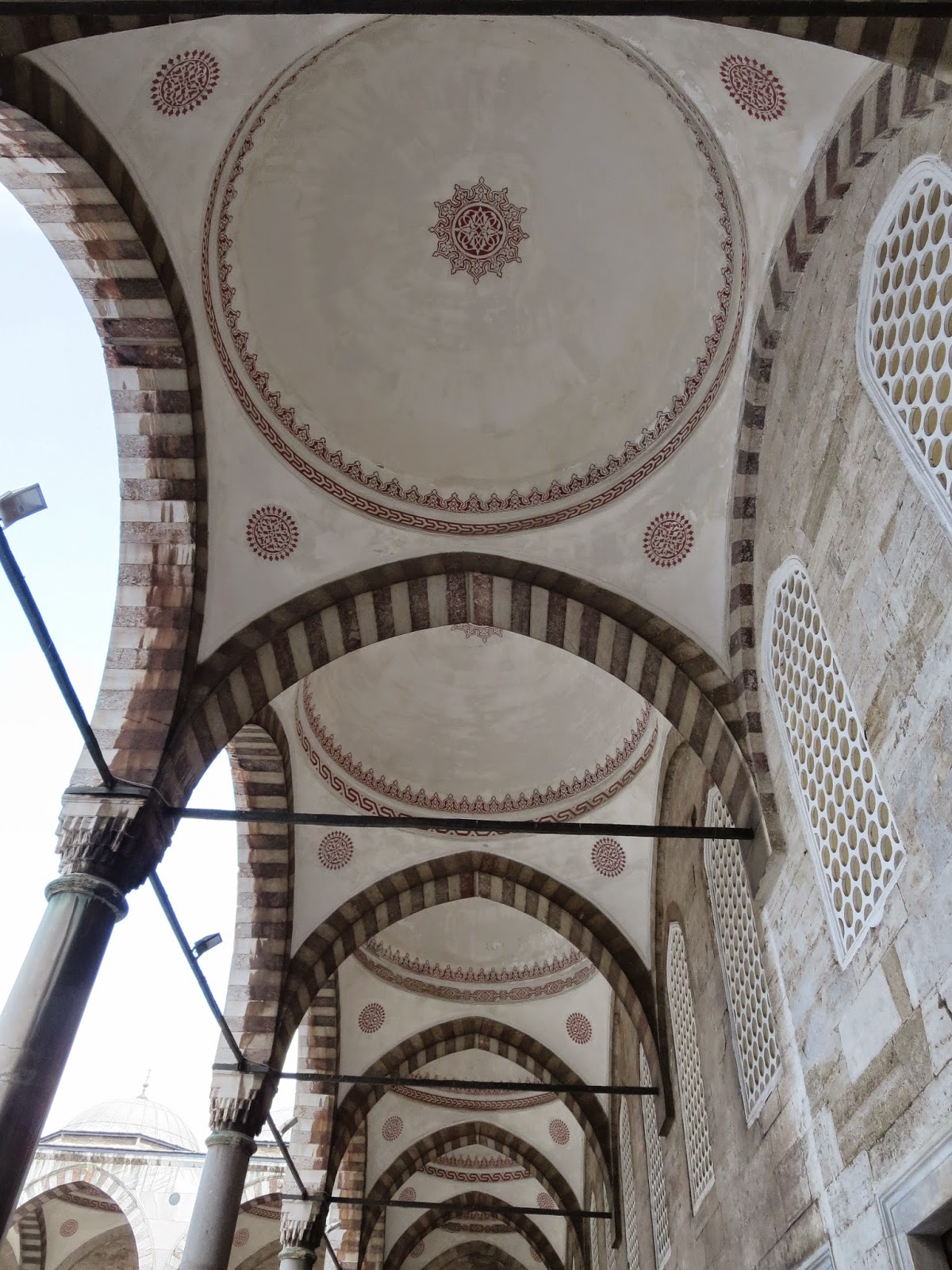 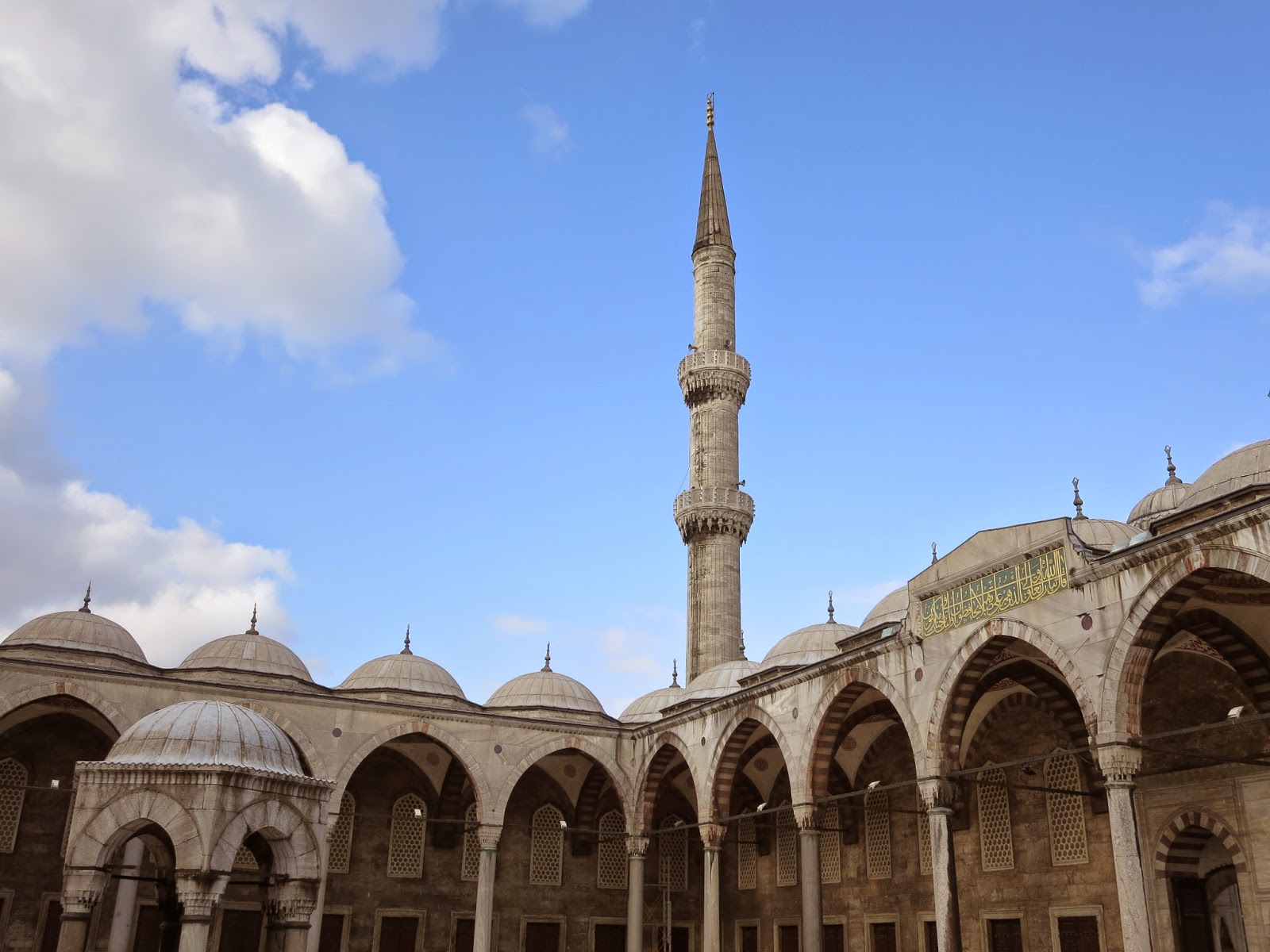 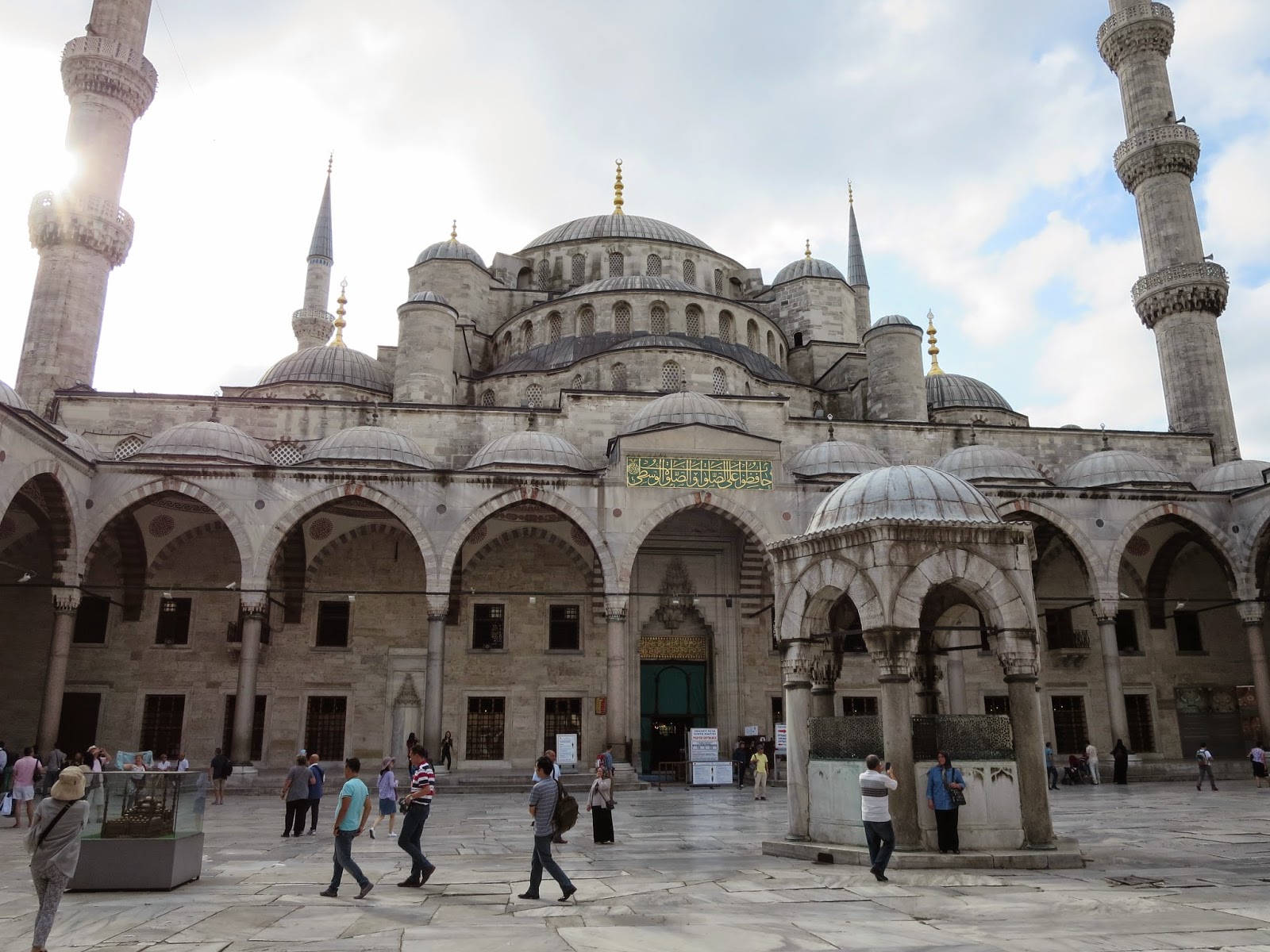 It is the first time I ever remember being inside a mosque and I was very impressed with the ornate interior.

Even if there was a rather unpleasant and overpowering smell of feet!!

This mosque was completed in 1616 and is still an active and popular mosque. It has a main dome, 6 minarets and 8 secondary domes and is considered to be the last mosque of the classical Islamic architecture. 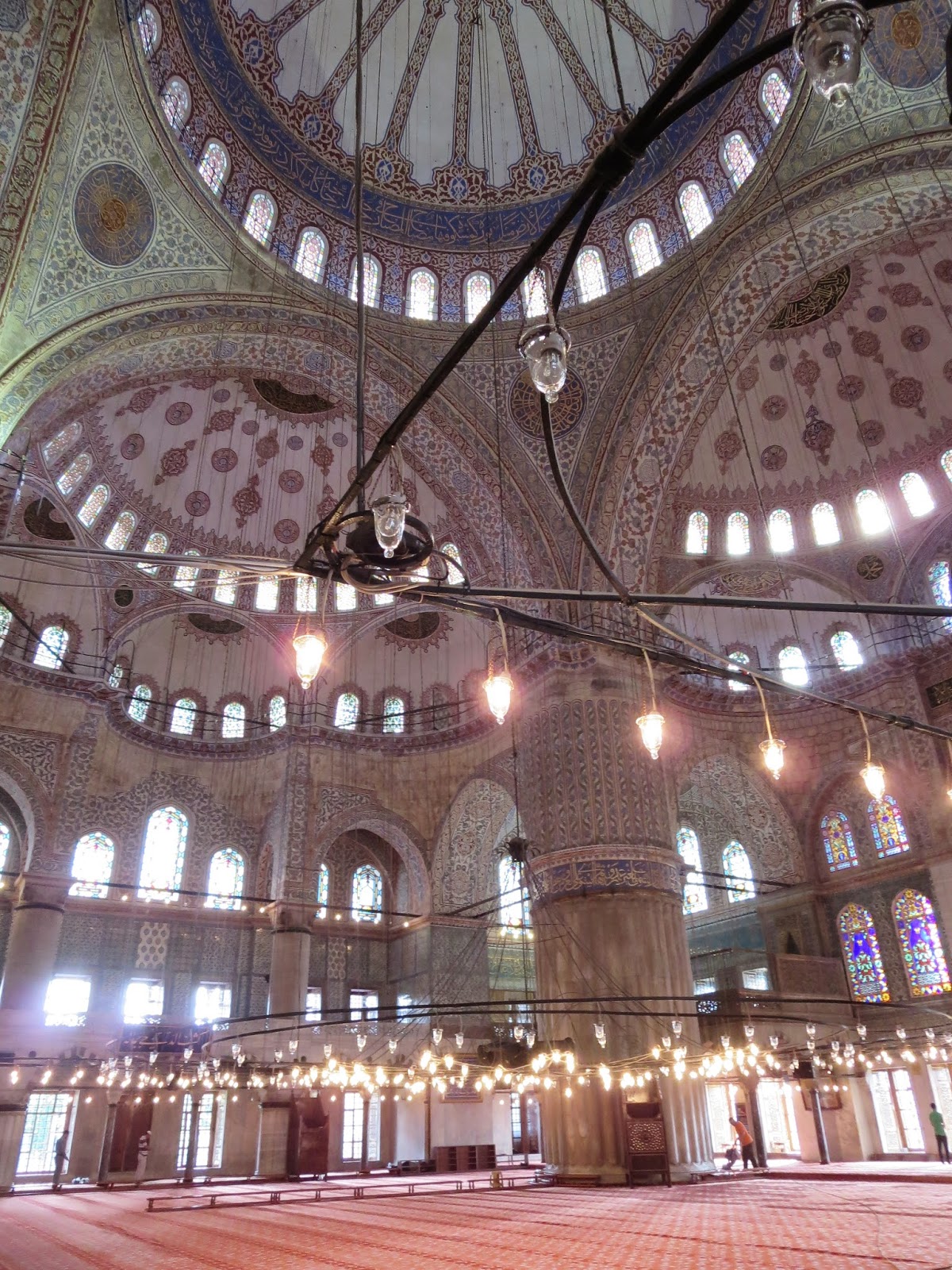 It gets the name “Blue Mosque” from the blue tiles inside - the mosque is lined with over 20,000 handmade ceramic tiles in more than 50 different tulip designs.

There are also over 200 intricate stained glass windows inside and huge chandeliers. 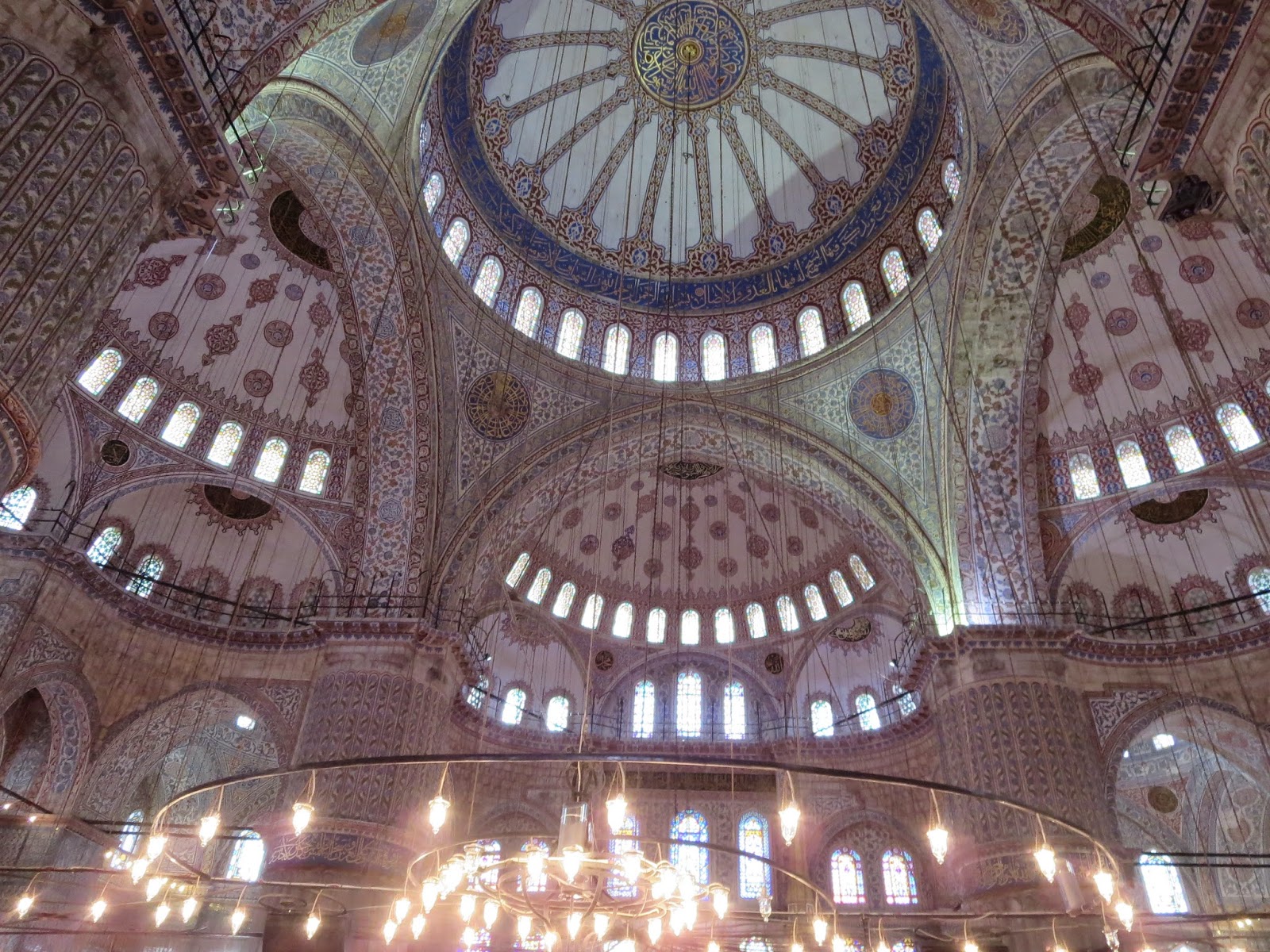 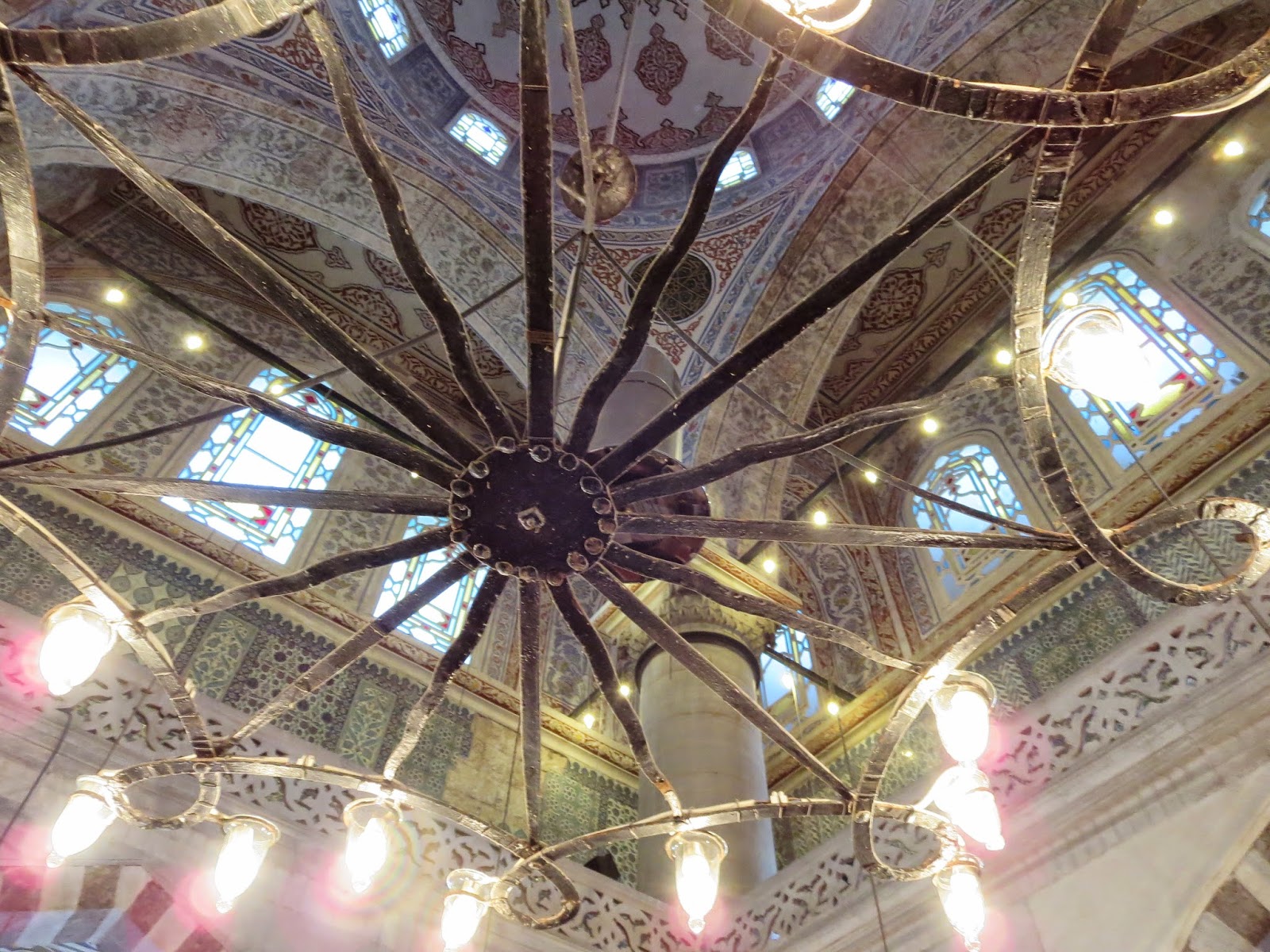 On the chandeliers you can see the ostrich eggs which are used to repel spiders (therefore reducing cobwebs!)

The floors are covered with carpets which are regularly replaced as they wear out.

The Blue Mosque was the first mosque in Turkey to have 6 minarets (there is still only 1 other). However at the time this was scandalous as it’s the same amount of minarets as the Ka’aba mosque in Mecca. However, the Sultan overcame this criticism by arranging for a 7th minaret to be built at the Mecca mosque! 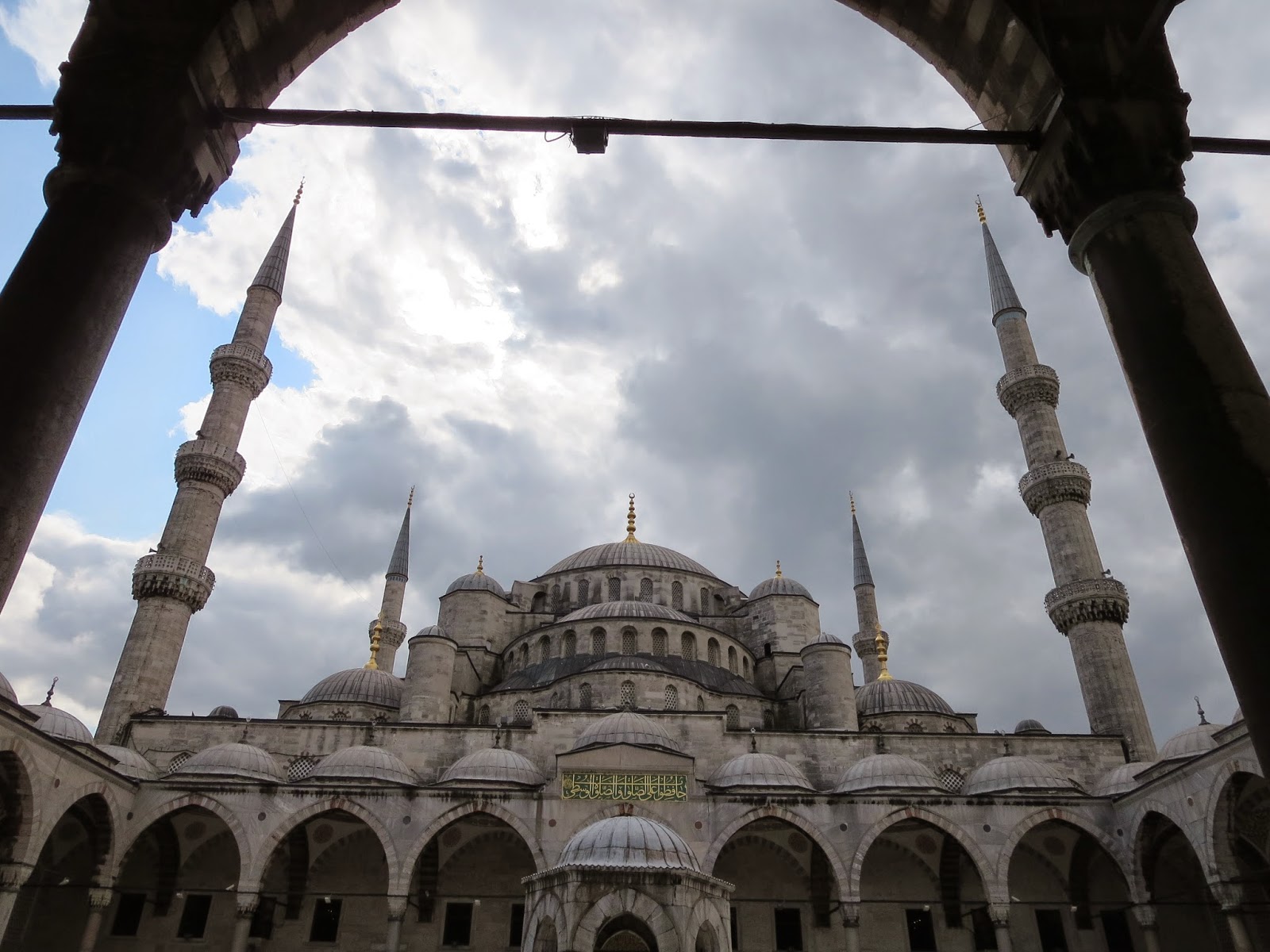 Next up was the mosque-museum Aya Sofia / Hagia Sophia. This building was originally a Greek Orthodox church, then became an imperial mosque and since 1935 it has been a museum.

This museum is particularly famous for it’s huge dome which is said to have “changed the history of architecture” as the world’s largest cathedral for almost 1,000 years (until the Seville cathedral in 1520).

I decided to do the audio tour guide which walked me throughout the whole building, explaining all the details and history of this iconic site. 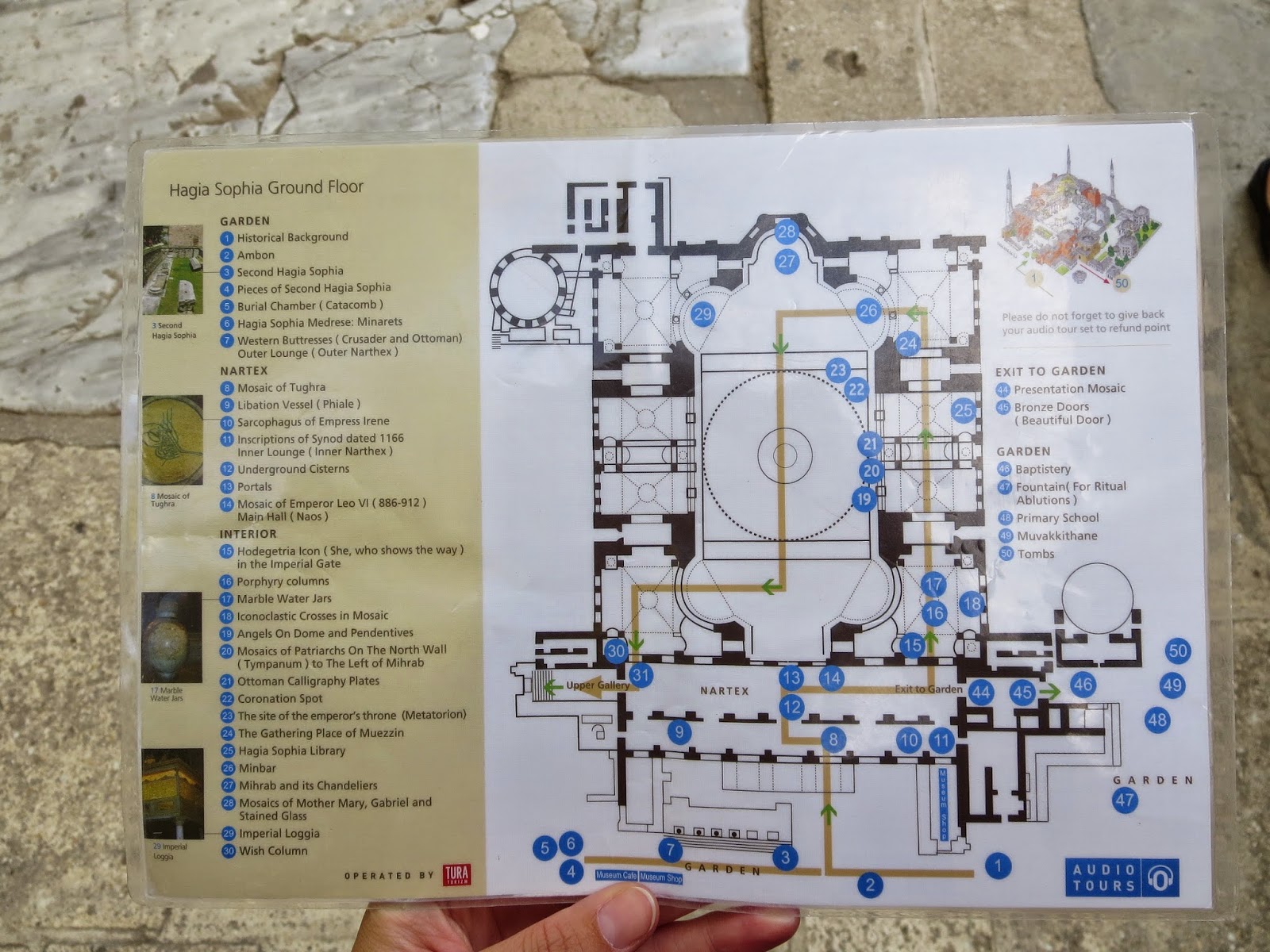 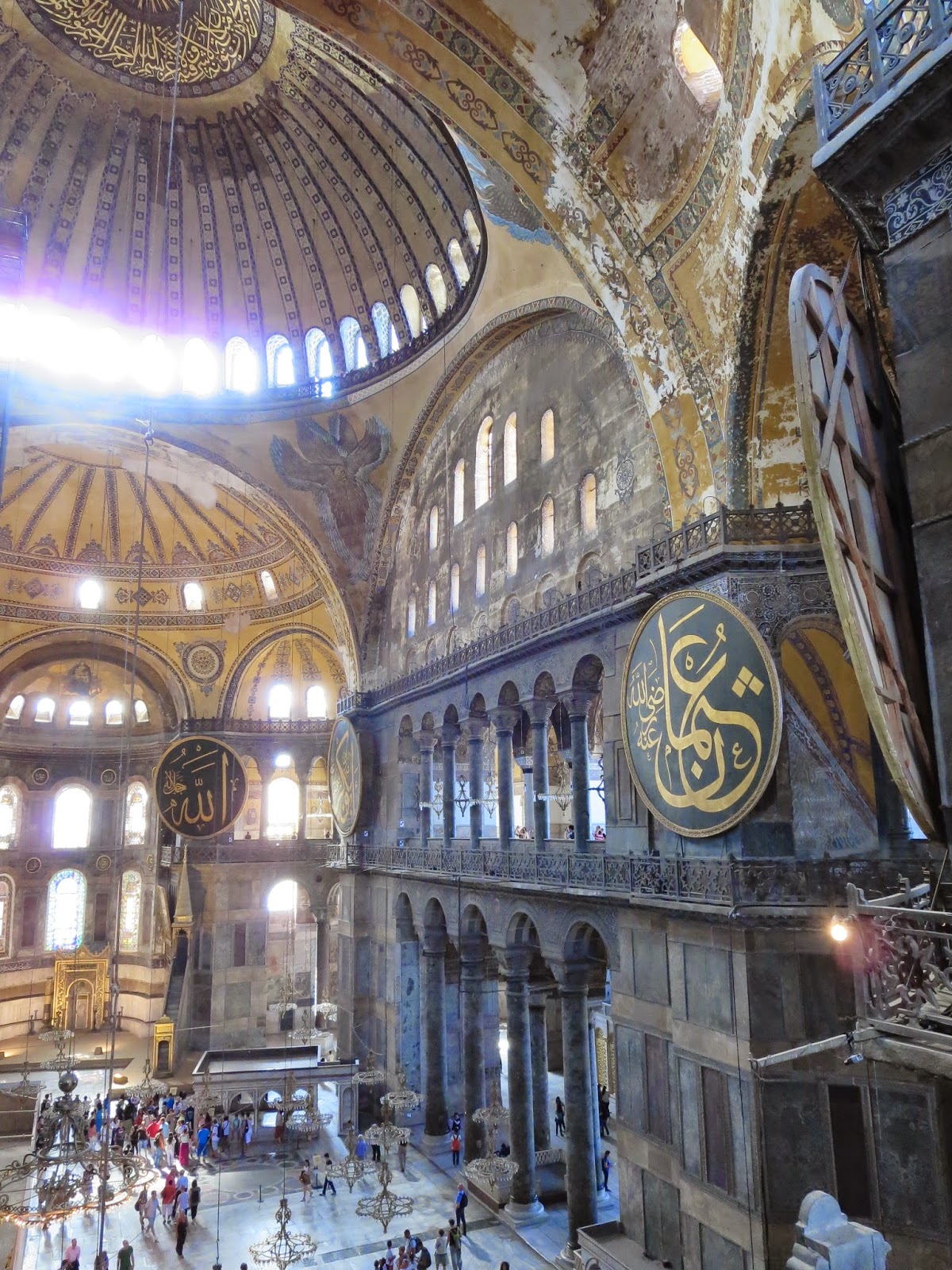 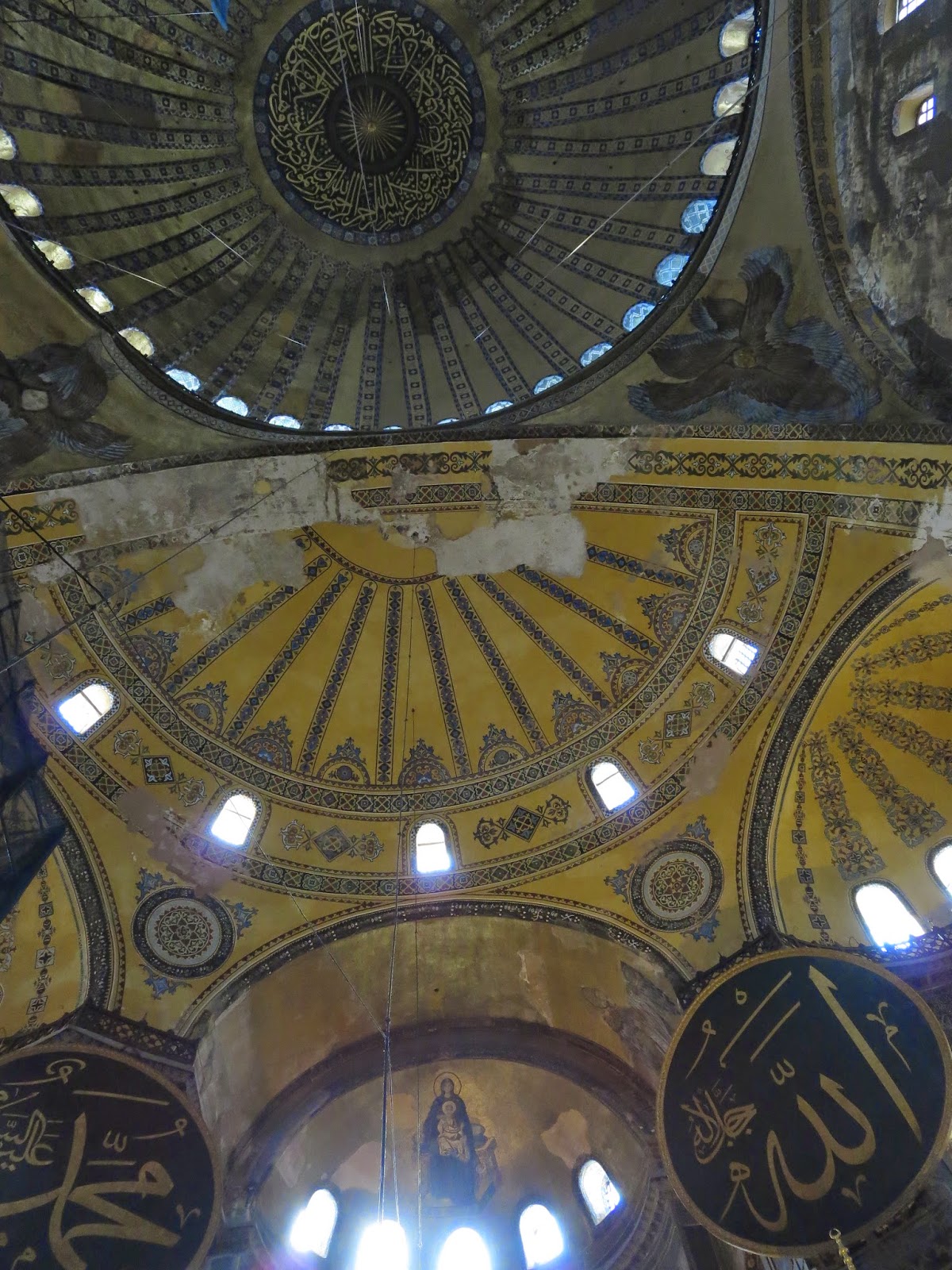 The dome was undergoing restoration work while I was there, as it has been for many years. 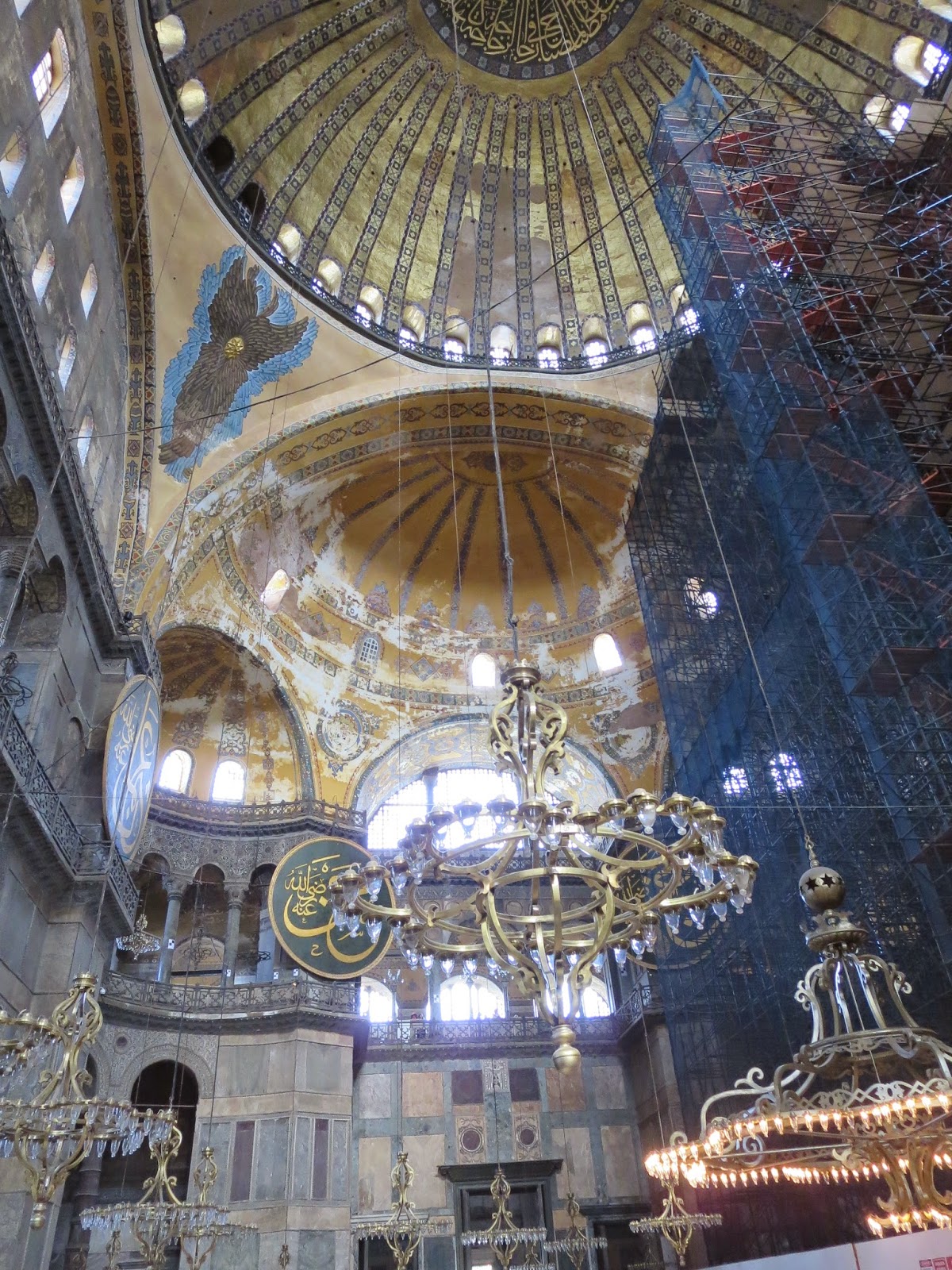 I also visited the ‘wishing column’ - a pillar with a hole in the middle. Legend has it that the column has supernatural powers and that touching it’s dampness cures many illnesses!

Next up was the Basilica Cistern (aka “the Sunken Palace”) which is just across the road from Aya Sofia. 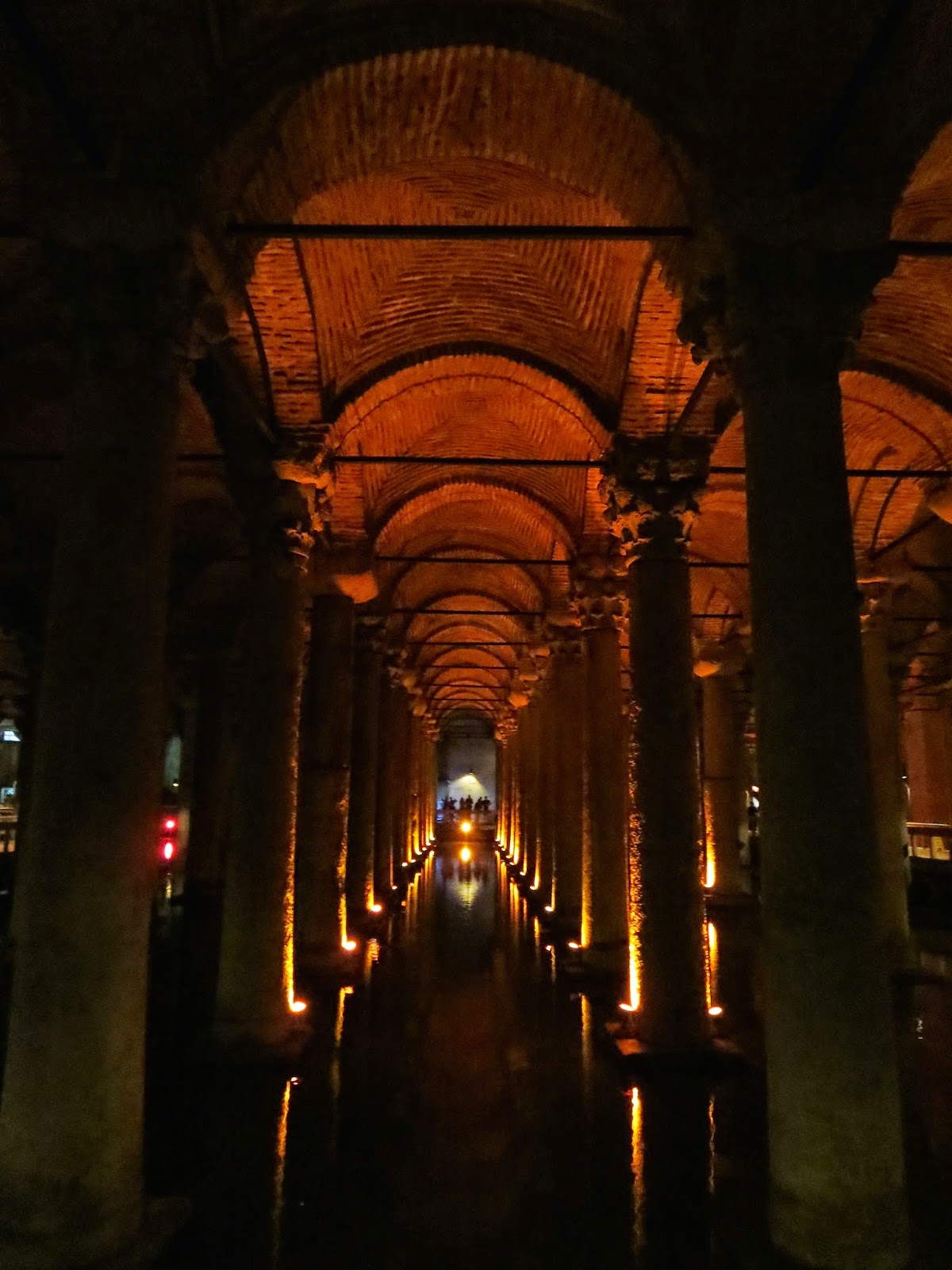 Its the largest of many ancient cisterns underneath Istanbul and was built in the 6th century as a water filtration system for the imperial buildings.

This particular cistern has also appears in a James Bond movie (“From Russia with Love”) and a Dan Brown novel (“Inferno”).  It is a huge underground chamber (approx 10,000m2) and can hold 100,000 tons of water but is almost empty today - save for a few fish and a few feet of water!

The dark room is filled with a ‘forest’ of 336 x 9 metre tall marble columns. They are arranged into 12 rows of 28 columns and subtly lit to give an almost magical feel.At one end of the cistern, Medusa’s face has been carved under two columns. One face is upside down and one is on it’s side - apparently to remove it’s power to turn onlookers into stone! 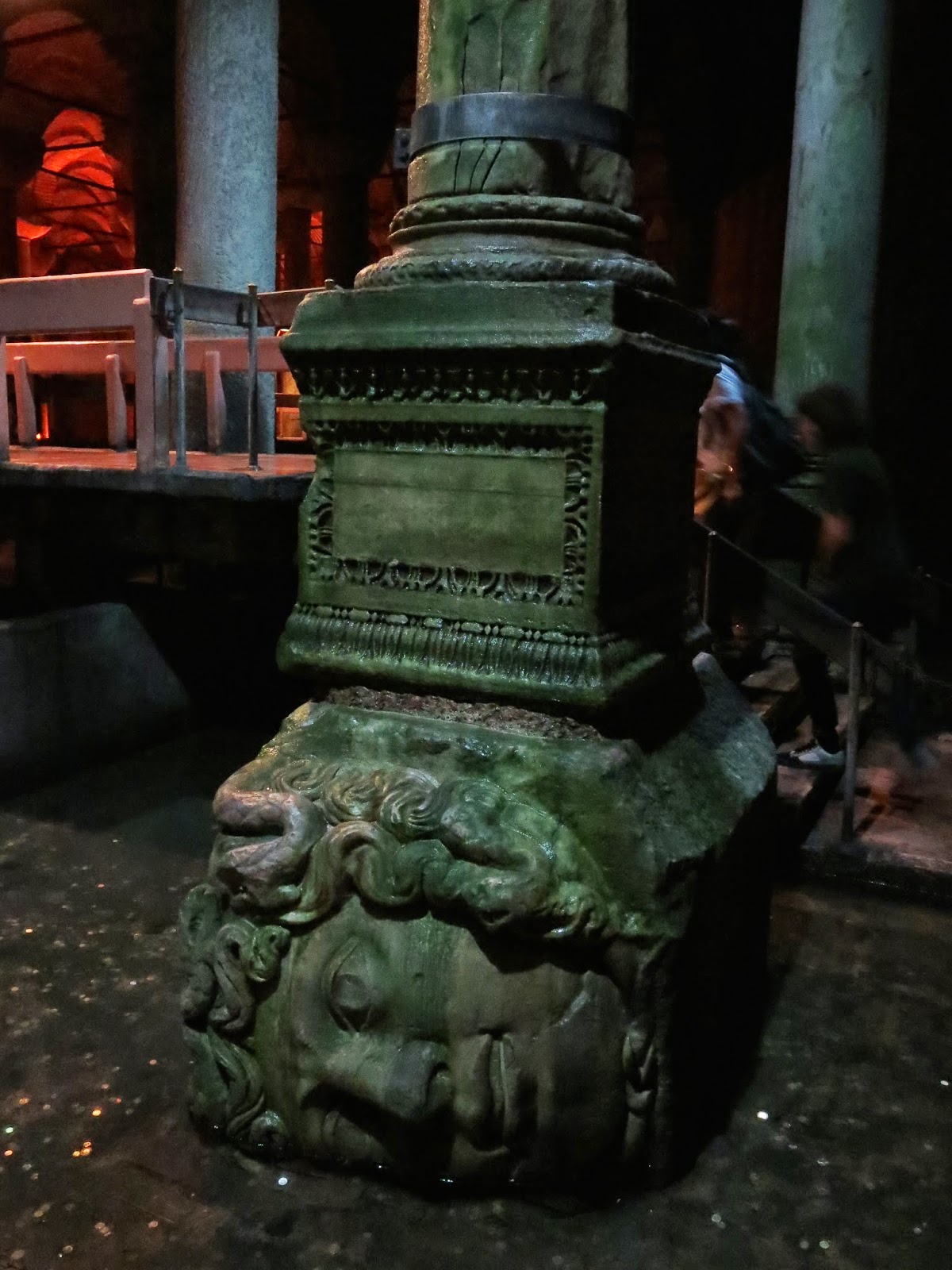 After my tourist-packed morning I was ready for a foodie treat so I headed to Hafiz Mustafa. 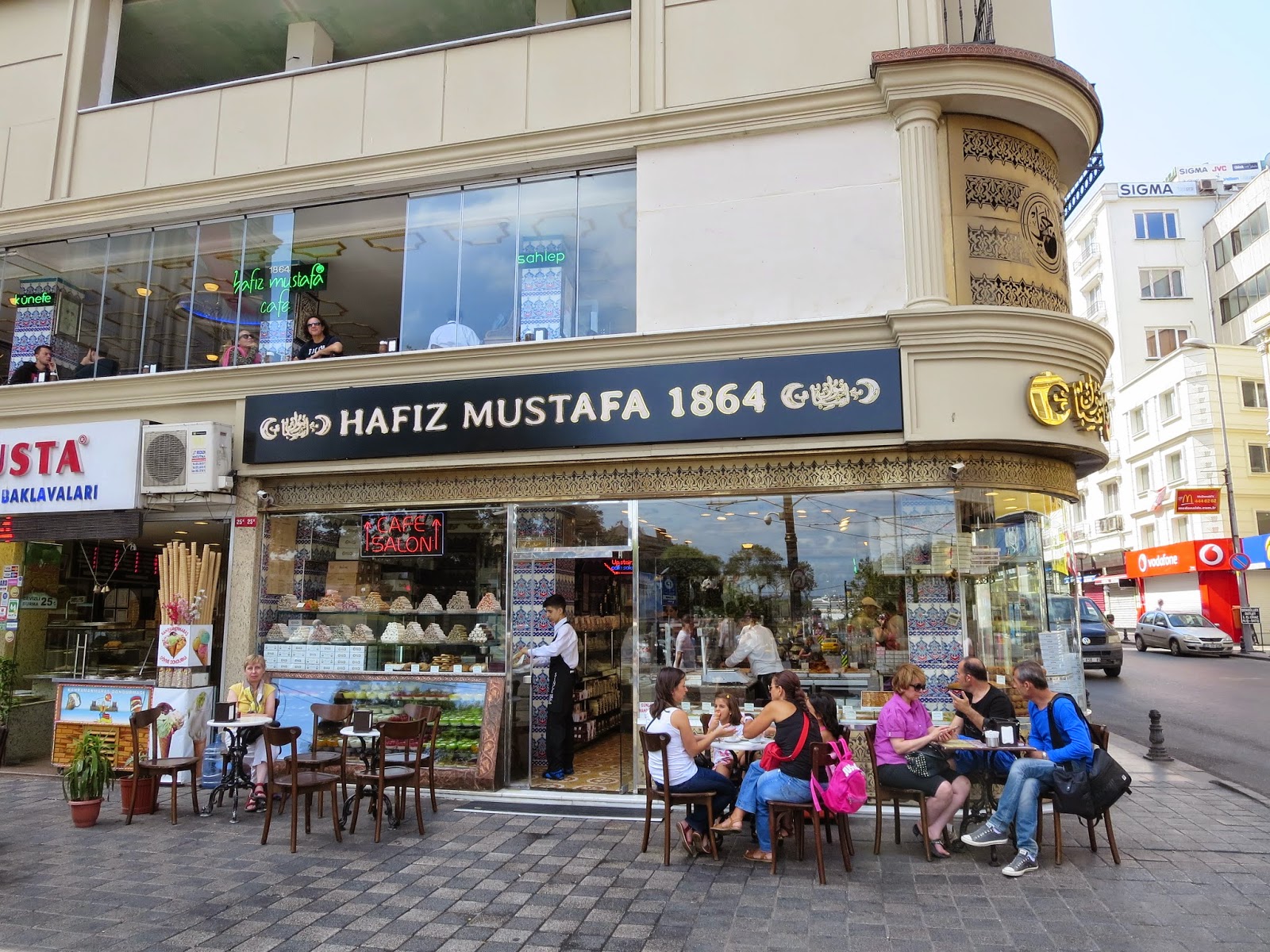 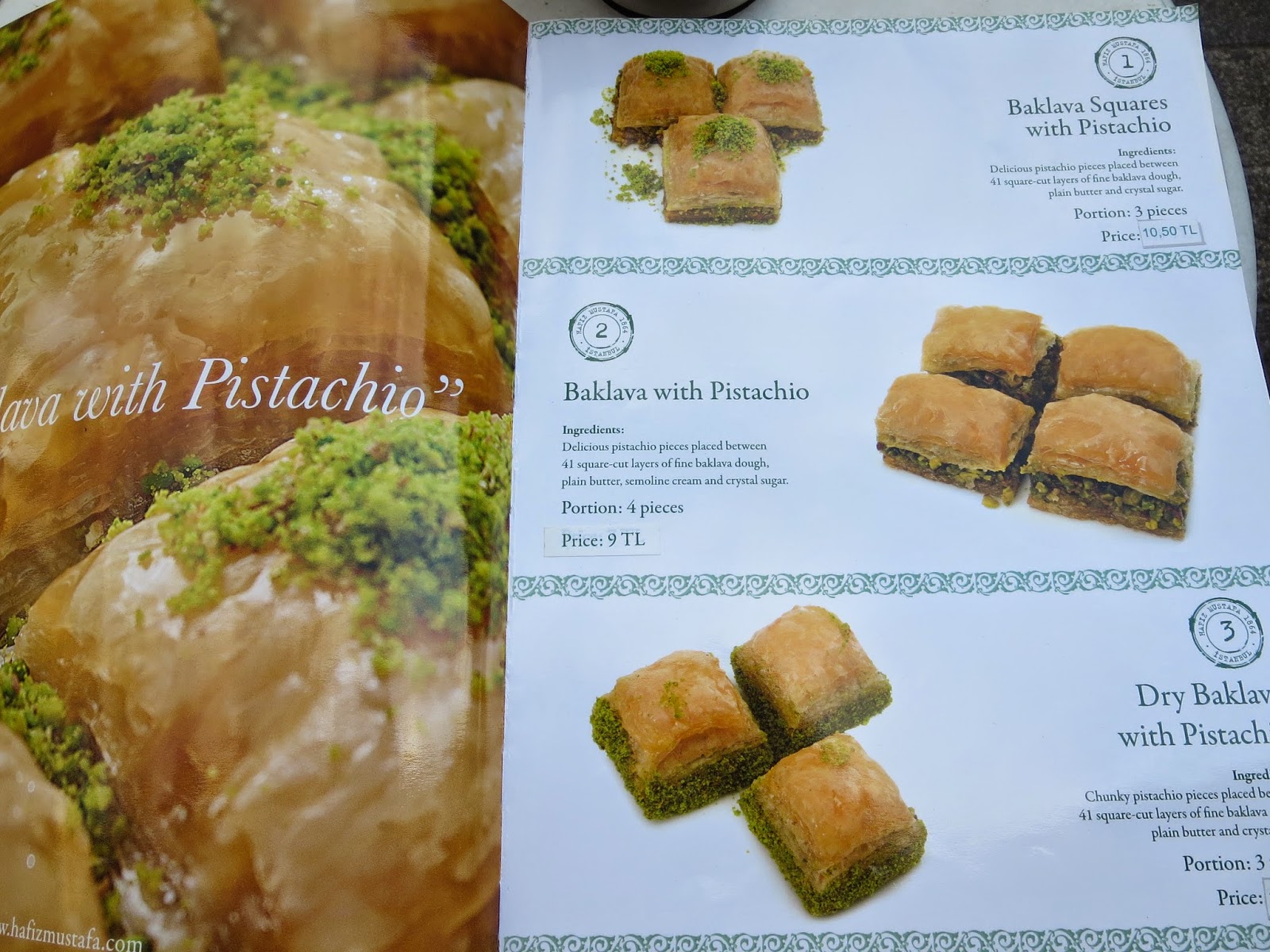 The menu and choice of sweets was amazing - I decided on a Turkish coffee (“Türk kahvesi”) and a selection of nut nests (“kus gozu kadayif”). 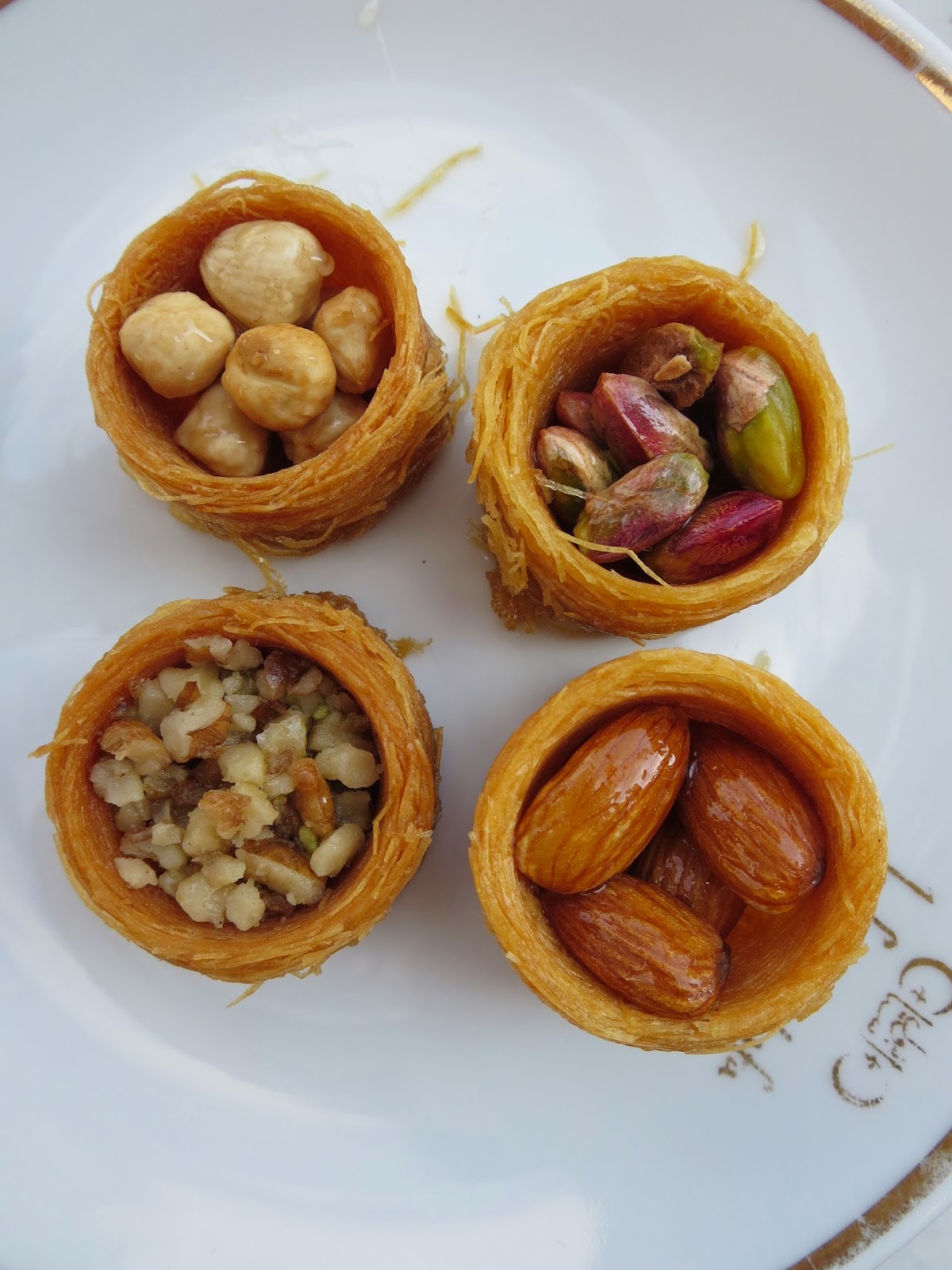 The coffee arrived with a Turkish delight on the side and the traditional glass of cold water.

Turkish coffee isn’t a particular type of coffee, but a way of making it. The coffee beans are finely ground into a powder and then put into hot (not boiling) water until the flavour is dissolved. It is then served in a small cup where the grounds then settle to the bottom of the cup.

I was delighted that the waiter had insisted that I should take sugar in my coffee because it was bitter.  Apparently, the sign of a good coffee is a thick foam at the top with no obvious grains in the foam or liquid.

You definitely don’t drink the sludgy coffee grounds that remain at the bottom of your cup - though some people use it for fortune telling!

Revived, I headed over to Galata bridge to head across the Bosphorus into the Beyoğlu district, the commercial and entertainment centre of Istanbul.

A bit of an uphill hike the other side!

First up was the Galata Tower (aka “The Tower of Christ”). This 66m stone tower is another of Istanbul’s landmark building and used to be the city’s tallest structure. It used to be used to spot fires in the city but now is the best way to get panoramic views of the city.

It is a busy spot and queues built up during the day so be prepared to wait! 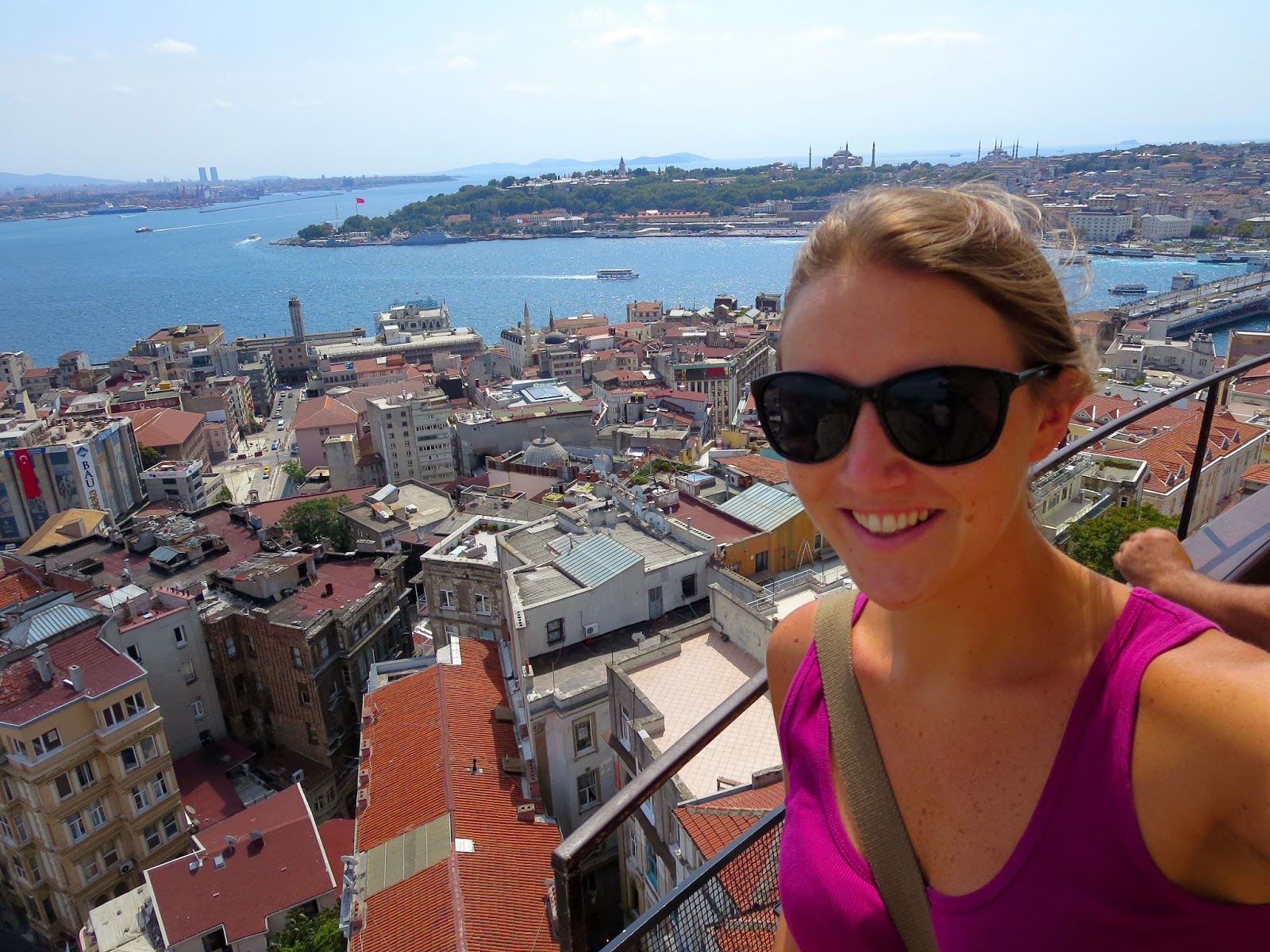 Coming down the tower, I stumbled into some wedding photos!

Whilst I was across the river, I headed onto Independence Avenue (“İstiklal Caddesi”). This street is one of the most famous in Istanbul - it is visited by approx 3 million people per day!

It’s a pedestrian street, bordered by lots of historical buildings, as well as embassies and churches.

The 1.4km street is home to shops, theatres, cafes, patisseries, restaurants and libraries as well as the historical red tram. 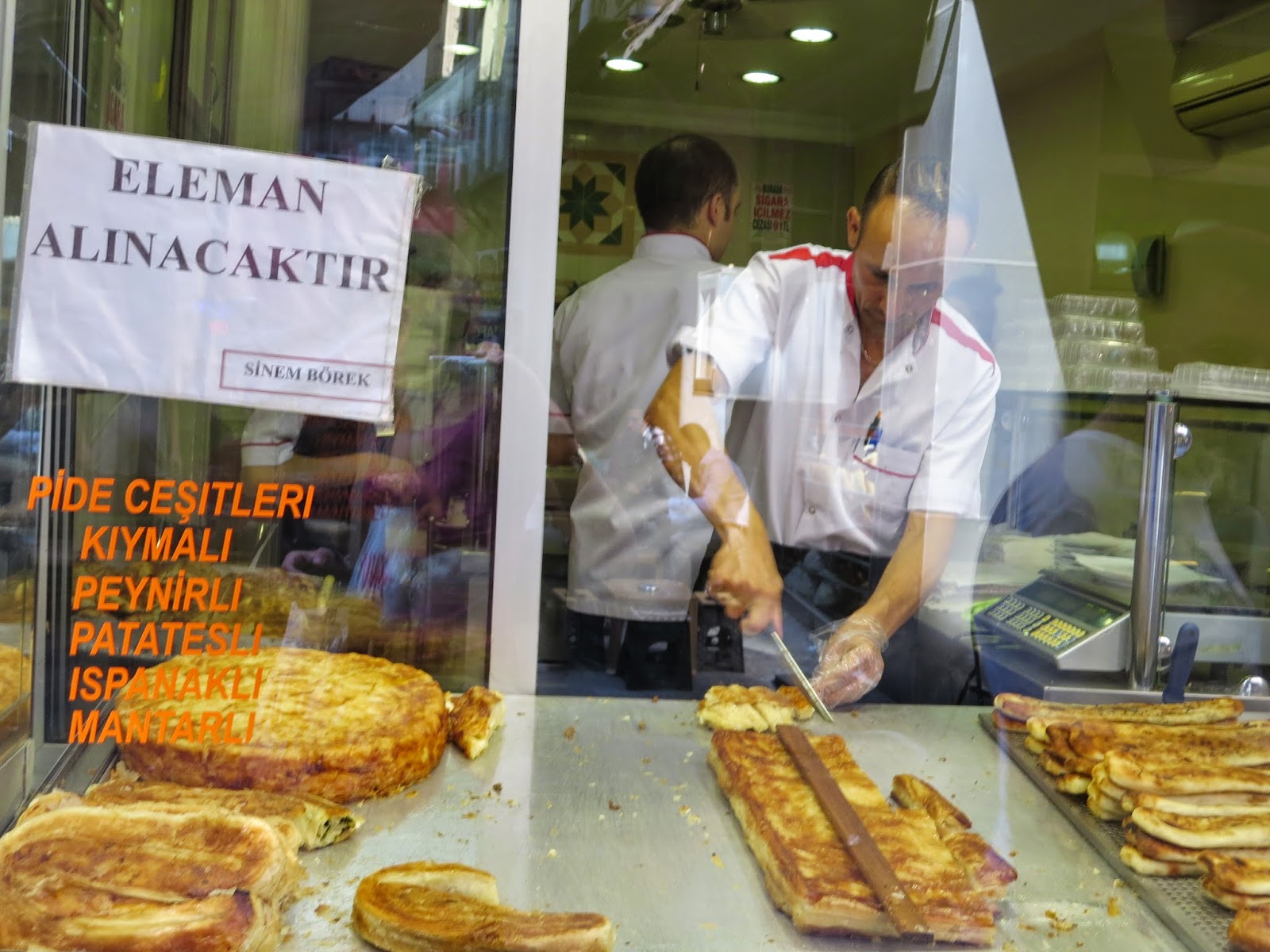 Ready for lunch I decided to head back to the water. I visited the fish market on the Beyoğlu side before walking back along the bridge past lots of fisherman. 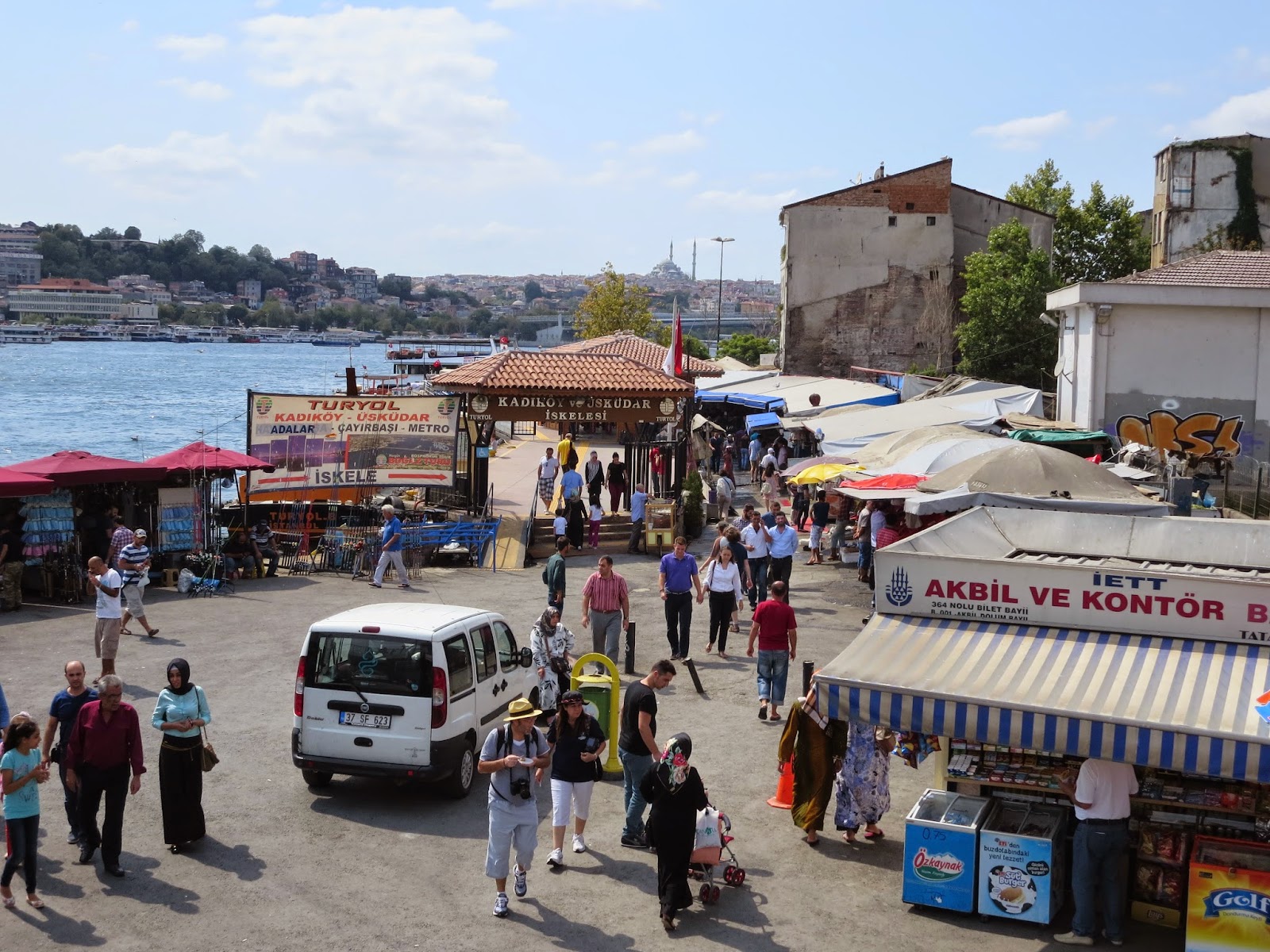 I decided to go to the Eminönü boats for Balık Ekmek (“fish sandwich”) - a very local lunch. They prepare the fish on the boats and then hand them to customers on the shore.

It’s a very straightforward dish - essentially grilled fish inside a hunk of bread!

It was tasty and clearly popular as the place was packed.

Heading off I walked past the New Mosque (“Yeni Cami”) which is next to the harbour and surrounded by thousands of pigeons waiting to be fed!

Next up was the Arasta Bazaar - a calm market street next to Aya Sofia. This bazaar was originally built in the 17th century but nowadays mostly caters for tourists with it’s carpets, mock Ottoman artifacts and jewellery.

I bought a “evil eye” bracelet as a touristy souvenir. The evil eye charms (“nazar” in turkish) are actual meant to provide you protection against misfortune and injury. 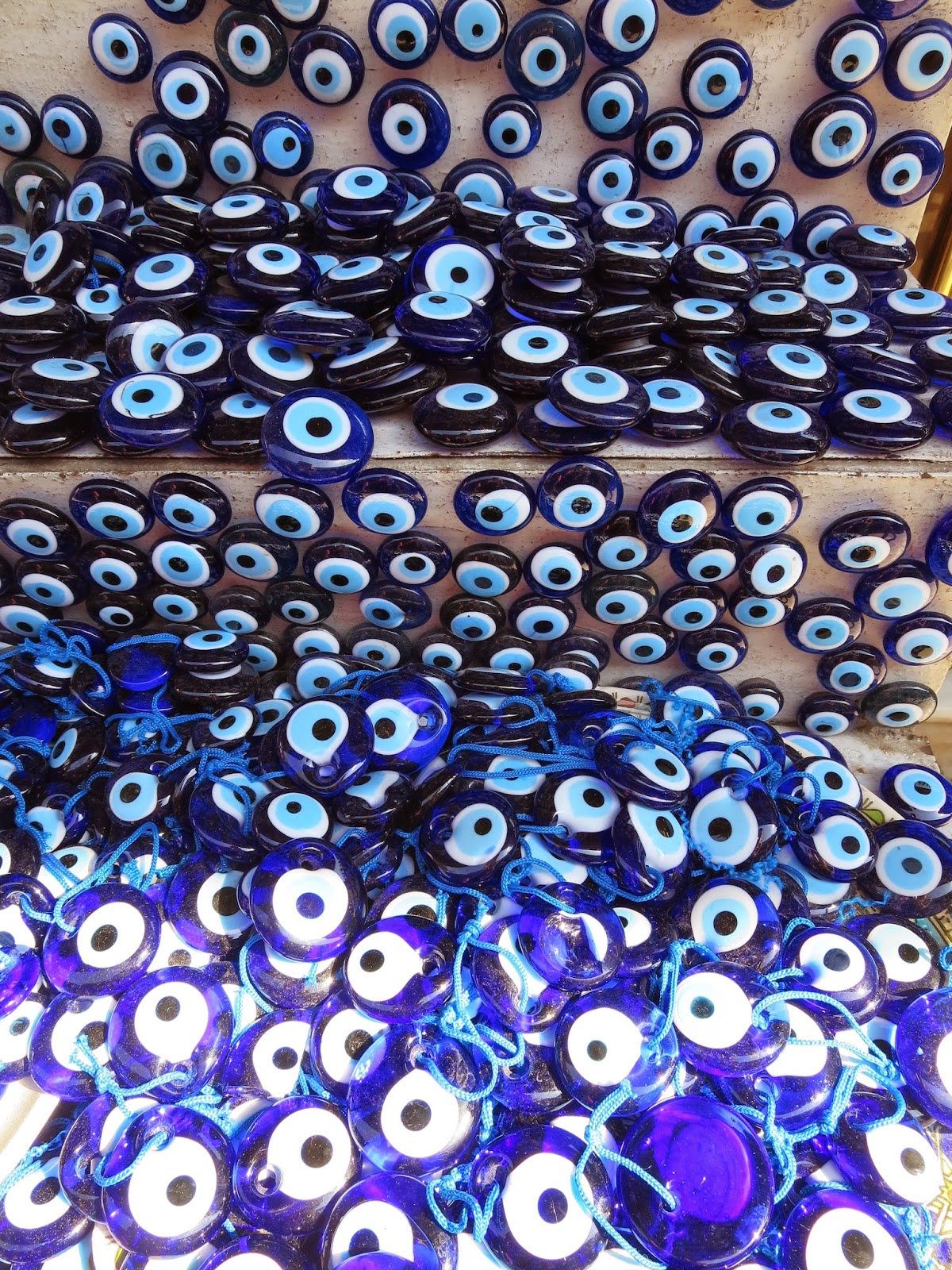 The final afternoon activity was Gülhane Park (aka “Rosehouse Park”) and the Topkapı Palace.

The park is one of the oldest and biggest parks in Istanbul and was once part of the outer garden of Topkapi Palace.

The palace was the main residence of the Ottoman sultans - their home between 1465-1856 - but is now a museum and major tourist attraction.

The complex is on Seraglio Point which overlooks the Golden Horn and the Sea of Marmara, giving great views of the Bosphorus.

There are 4 courtyards and dozens of buildings making up this palace containing a number of treasures from both a religious and historical perspective - e.g. Muhammed’s cloak and sword.

Evening arrived and it was time to join my tour group. I was doing a G Adventures tour  around the country for the next two weeks to “Discover historic cities and explore the ancient ruins of Ephesus, marvel at the extraordinary scenery of Cappadocia, enjoy dinner in a local family home, relax on an overnight boat trip, live like a local in a Turkish village”.

We went for dinner at the nearby Ottoman restaurant, Pasazade. I decided on Hünkar Beğendi (“Sultan’s Favourite”) which was a delicious choice - beef slices with apricots, apple and almonds on smoked aubergine / eggplant mash.

After dinner we headed up to the restaurant's rooftop bar for drinks where we were treated to fireworks over the freedom bridge!