Posted by The Hungry Traveller on 12:50 in Asia Europe Travel | Comments : 0

As I'm now a European resident (clearly, the UK doesn't count as 'Europe'!), I'm on a quest to see more of the continent. Next on the list was Turkey - a place wrapped in mystery to me, continuing some of the Greek food themes combined with hints of the Middle East.

After an early start (4.45am) I arrived in Istanbul's Ataturk airport around midday and decided to use public transport to get me into the Old Town (Sultanahmet) part of town. It's super easy (& cheap) if you're considering it. I caught the metro (M1) to the end of the line (Arksay) where I switched to the tram to take me onwards to Sultanahmet.

I'd used hotwire.com and managed to get a hotel room right by the main sites of the former capital of the Ottoman Empire - Aya Sofya & the Blue Mosque, right at the heart of the Old City.

It was lunchtime and I (of course!) was starving so headed straight to the square in front of the mosques for a sweet snack lunch. I chose BBQ sweetcorn to quieten my rumbling stomach. 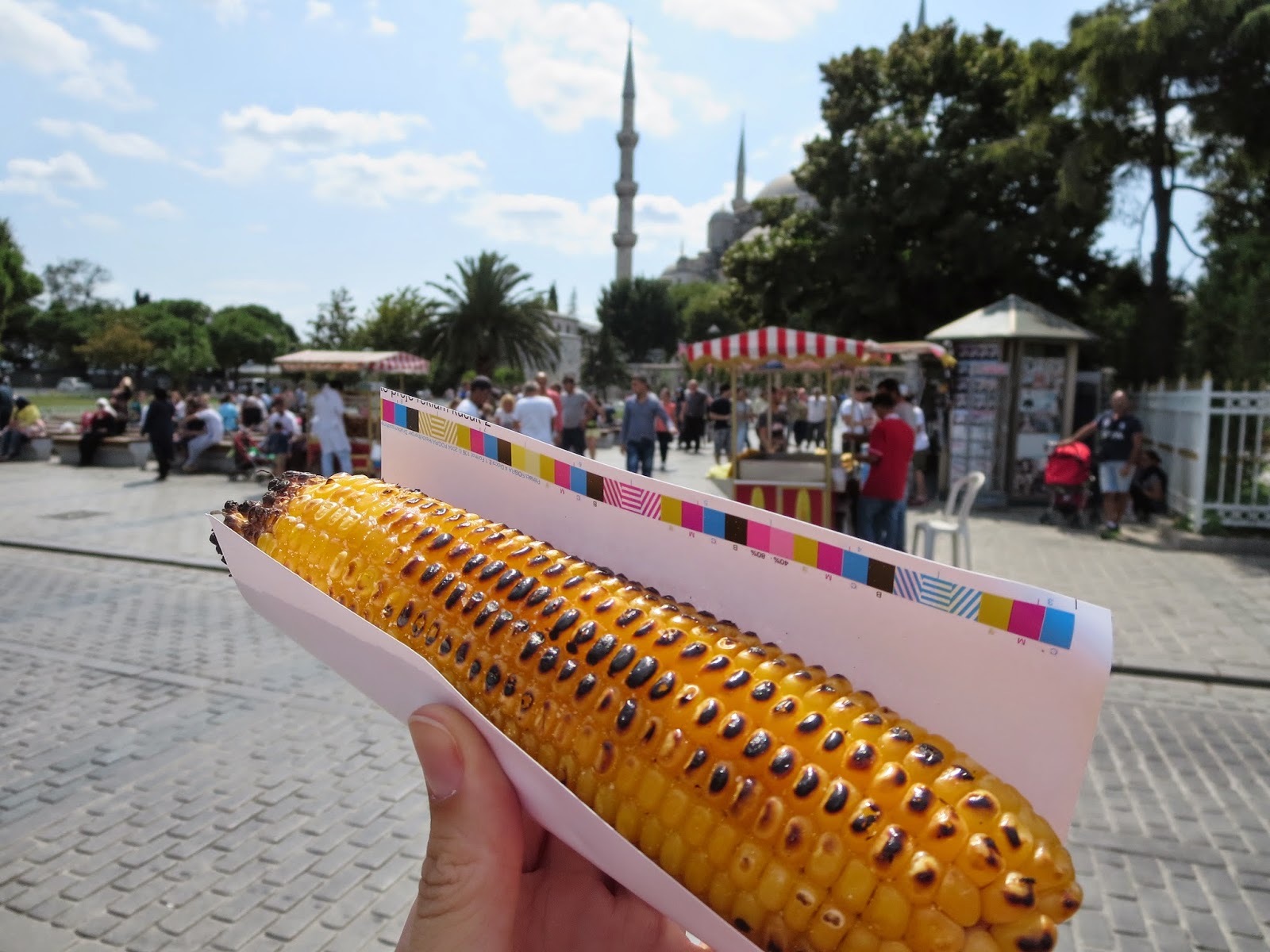 Seeing the 'big bus city tour' buses around me I decided to hop on and get myself orientated with this exciting city.

Istanbul is the 5th most popular tourist destination in the world, particularly for it's historic centre... 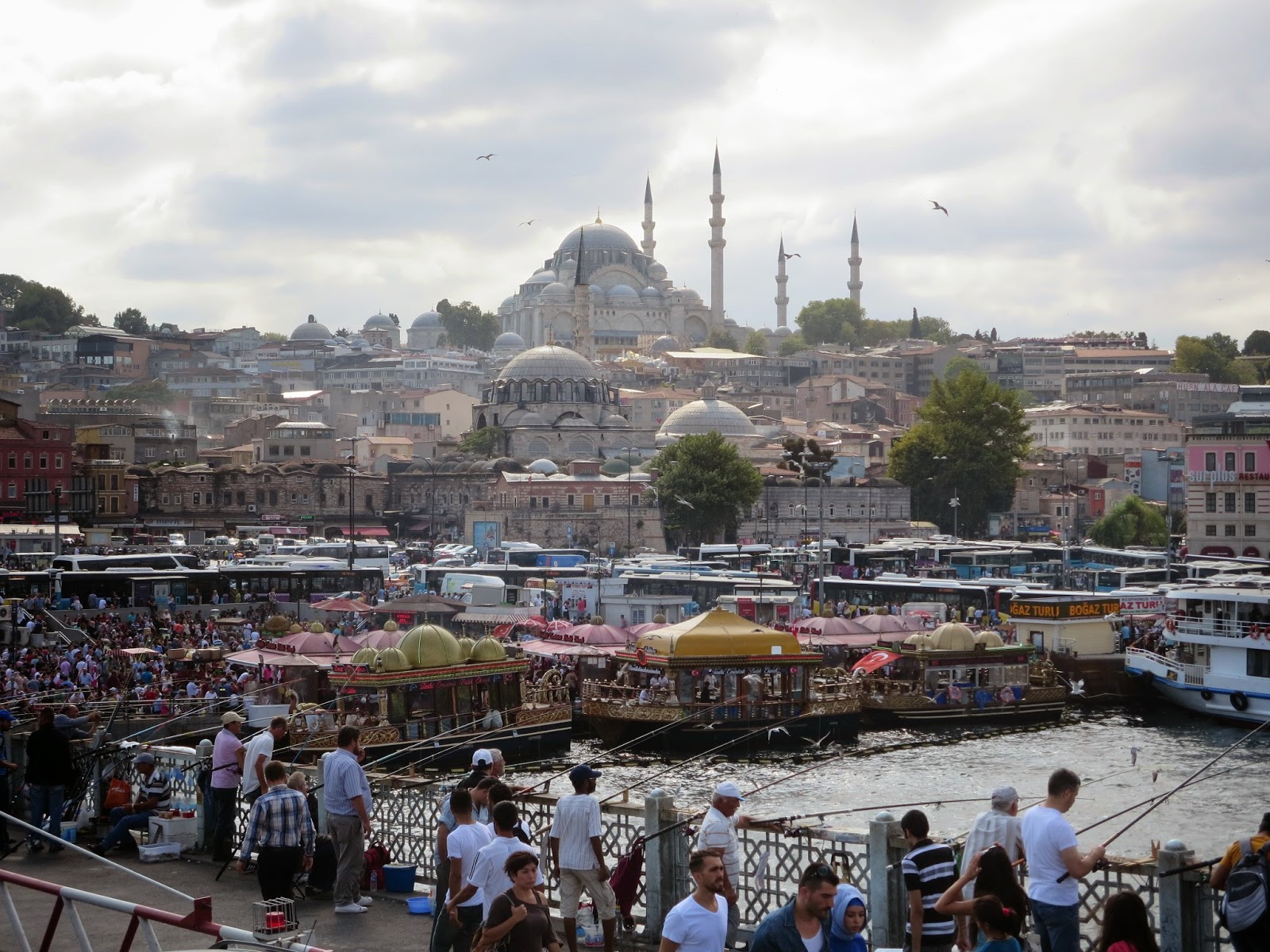 Including a drive over the Bosphorus bridge which connects the European and Asian parts of the city.

Until then I'd no idea that Turkey (& even Istanbul) is divided between both Europe and Asia. Only 3% of the country is actually in Europe with the rest separated by the Bosphorus, the Black Sea and the Marmara sea.

Istanbul was originally a small city called Byzantium when conquered by the Romans in AD 2. It was renamed Constantinople in AD 330 after Emperor Constantine relocated his capital there. When the Allies occupied the city after WWI, they were intrigued by the extravagance of the sultans. To remove this decadent image, when the Turkish Republic was set up in 1923, Turkey’s capital was moved to Ankara, however Istanbul remains the main city of the country.

I jumped off at the Egyptian Spice Bazaar which was awesome - packed full of people and a really lively local market. 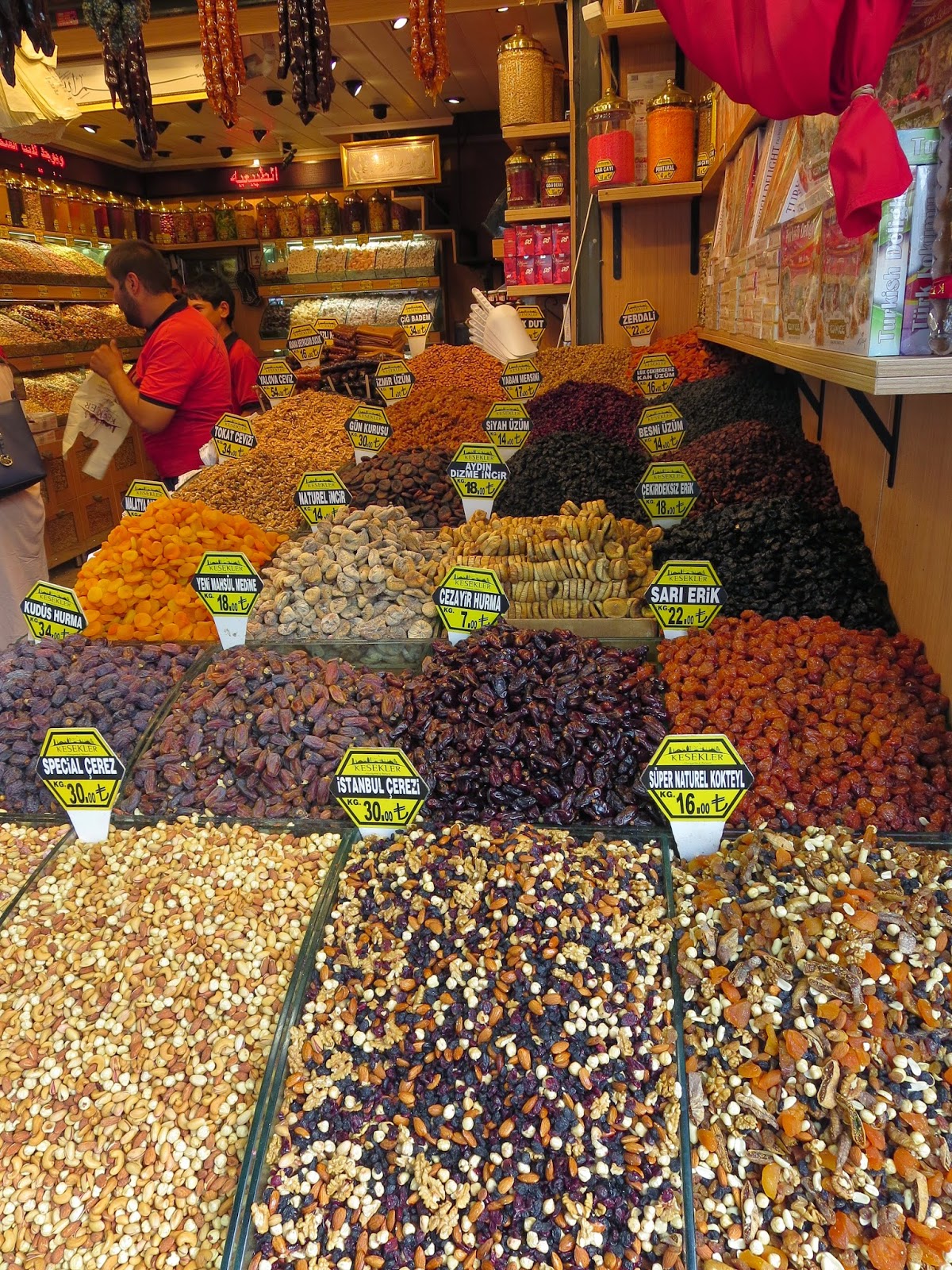 This atmospheric market was built in 1660 and was / is the centre of Istanbul’s spice trade.

I was surrounded by Turkish Delight, teas, spices, dates, soaps and all sorts of trinkets and treats.

So, of course, I had a couple of indulgent treats...just to support the local economy, you understand!!

From the Spice Bazaar I continued my shopping theme into the Grand Bazaar (“Kapalıçarşı” in Turkish, meaning ‘covered market’).

The Grand Bazaar is one of the biggest and oldest covered markets in the world, encompassing 61 streets and over 3,000 shops - attracting over a quarter of a million people every day!

There are four gates to get into the bazaar:

While appearing more organised than the chaotic Spice Bazaar, the Grand Bazaar is a maze of lanes with different treasures found in different areas. Including jewellery and gold, furniture, carpets and leather.

While a little weary by now, I wanted to make sure I saw the bazaar today as it’s closed on Sundays. I treated myself to some travel jewellery - I always like to pick something up from the places I visit.

Ready for some downtime I headed to a bathhouse to experience the much-hyped Turkish hamam.

I was about to go into one of the bathhouses I’d seen in Hope Engaged's blog when a local started chatting to me and actually recommended another place for me to try - Cağaloğlu Hamamı.  Katie's blog was actually my 'To Do' list for my first day...she also shared a beautiful quote about the city, which I definitely agree with:

"If one had but a single glance to give the world, one should gaze on Istanbul"
- Alphonse de Lamartine


I’m always keen on to take recommendations so followed this random local to a300 year old bathhouse. It was built in 1741 for Sultan Mahmut I and offers a range of bathing services.

I opted for the complete bath service: “Relive the aches and pains of the day with this popular combination of Turkish massage and exfoliating service.”

The hamam appears in the “1,000 places to see before you die” book and it’s gorgeous interior is a combination of Baroque and classical Ottoman architecture and one of the last great hamams built in the city during the Ottoman era.

It is a segregated bath house, offering a men and ladies section, so after paying I headed into the ladies area. I appeared in a courtyard surrounded by small individual changing rooms with a domed roof above and a water fountain below with women relaxing in their bath clothes.

A friendly lady took charge of me, despite our language barrier, she ushered me into a changing room where I changed into a pestamal (cloth covering) and wooden sandals.

She led me into the central warm room. There is a huge domed ceiling with stars carved into the stone. In the middle is a large marble block with marble columns and mini fountains around with ladies relaxing all around.

My masseuse got me to lie on the central marble for a while to warm up. I happily admired the beauty setting and relaxed into the peaceful surroundings.

Then the service started. I removed my cloth and it was placed on the central slab. First I was covered in lukewarm water, then lay on the cloth as she exfoliated me head to toe, front and back with a mit (bye bye tan!!). Then I was rinsed off before being soap massaged all over and again rinsed. Then finally my hair was washed before being left to relax and soak to my heart’s content.

During my massage a dance ceremony started up - I think for a hen do and fruit was placed in the centre of the room for all to enjoy and the masseuses all started singing!

After some time I drifted back to my little room and got dressed, ready to do some final exploring.

I decided to jump back on the bus tour and did the blue route, taking in the Golden Horn part of the city as the sun set.

Finishing up at Aya Sofia I admired the two iconic mosques in the fading sunlight and enjoyed the colourful water show infront.

Exhausted, I floated back to my hotel (past some whirling dervishes) where I crashed to the soothing sound of the last evening call to prayer from many mosque minarets.