This summer has been excellent…it’s felt like almost every week I’ve been heading off on another adventure! This time I was Australia-bound for work in Melbourne.

I’d been to Melbourne once before, about 6 years ago at the end of a crazy 3-week trip down the east coast of Australia. It was Formula 1 time and we were shattered so I definitely didn’t see it at it’s (or my) best. This time was completely different…I now love the city! In the words of the Lonely Planet “coffee, food, art and fashion are taken mighty seriously" – how could I not love it!!

Here’s a little overview of some of the highlights, must dos / eats!

Melbourne has a very impressive coffee culture. It started back in Victorian times and was enhanced by Italian immigrants post-WWII. The best area is ‘The Lanes’ for enjoying a good caffeine / cake fix…

Even global chains, like Starbucks, couldn’t succeed in this highly developed and demanding environment!  One of my favs, was Degraves Espresso which had a cool interior, seating was provided by old cinema seat benches.

Have a drink above or under the city


Melbourne has a 24-hour nightlife with lots going on and is a very safe feeling city to walk around late in the evening. Live music is very popular, as well as a growing bar scene.

Vue de Monde is a restaurant in the old observation deck of the Rialto, providing excellent views over the city. The level above this famous restaurant is Lui Bar where I decided to head for a Friday evening drink.

The menu was almost as impressive as the view! Check out the pop-up style!!

Being in a city obsessed with coffee, I decided to go for “The Vodka Pour Over”.

I was impressed when a coffee filter and champagne saucer arrived on my table.

After waiting the tantalizing minutes for the drink to drain through, I happily sipped the finished cocktail admiring the sunkissed city below.

Ponyfish island is another Melbourne institution – it’s a café/bar under the Southgate pedestrian bridge. I didn’t get around to having a drink in this lively venue, but it’s on the list for next time!

Eat. Then eat some more!

If you’re a foodie, then Melbourne is one of the best places to go in the world! There is a huge amount of good and affordable food from all around the world. My particular favourite is always Asian food and there is a massive selection of Chinese, Thai, Korean, Japanese, Malaysian and Vietnamese places to eat at.

A couple of my recommendations would be:

Chin Chin– I’ve lost count of the number of people that recommended this awesome Thai place to me. It’s got a massive menu and a fab interior.

It’s always packed, so arrive early and be prepared to queue.

Fortunately being alone, I easily grabbed a seat at the bar where the friendly staff helped me navigate the foodie treats on offer whilst I sipped on my Chilli infused vodka cocktail.

Melbourne is one of the friendliest places I’ve ever been and I ended up splitting dishes with the man sitting next to me at the bar so I got to try a feast of tasty dishes. There is also the tasting menu if you’re up for a banquet!

My random dinner-companion and I went for…

Brunch – one of my favourite meals in the day, there is no shortage of yummy cafes and markets to dine at. Plus smashed avocado was everywhere, frequently accompanied by bacon and eggs…who was I to argue!?

Coda – This basement style place was recommended by a fellow travel foodie (thanks, Lou!) and didn’t disappoint.

I squeezed in at the bustling bar and the (British!) barman highlighted some of his fav dishes on the tasty-sounding menu to get me going as I peered in at the kitchen...

In their own words:
"While we may be listed as ‘French – Vietnamese’ or ‘Modern Australian’, our menu has been designed with a passion for balanced flavours, seasonality and innovation...No matter which spices or continents influence our cooking, we will always ensure you have a memorable food experience...Our staff, are not only here to carry plates and pour wine, we are here to be your culinary tour guide.”

Kicking off with an ‘old cuban’ cocktail, I then happily perused the food menu before settling on..

With heart of palm, honeydew melon, mint and cucumber salad

It was all delicious!

Longrain  - I met up with an old friend that I’d met travelling through Eastern Europe about 5 years ago and she introduced me to this delicious place. It’s a modern Thai place with a really relaxing atmosphere. The place is full but doesn’t feel crowded as you sit around massive wooden tables and tuck into beautiful food.

In their own words: “Welcome to Longrain, Melbourne, continuing to evolve Martin Boetz's original Longrain vision with a menu that brings together South East Asian influences with the best Victorian produce. Inspired by the communal eating philosophy of the Asian table, our menu is made up of dishes created for sharing. Large servings and communal tables encourage the spirit of eating together, so you can try each dish as part of a full tasting experience, just as it was intended.”

We happily followed this advice and had a delicious feast… 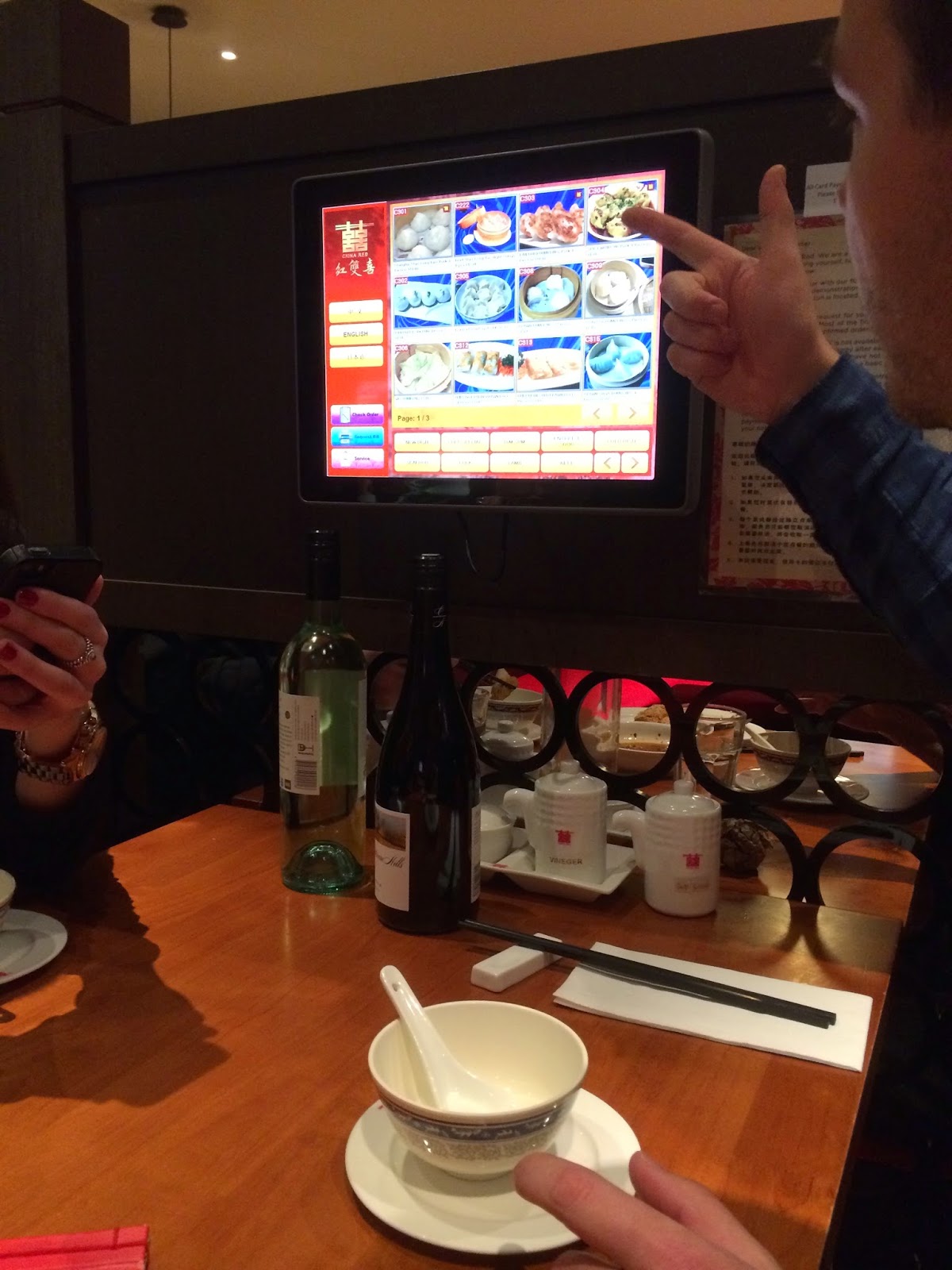 Trying to mix my food up a bit, I ended up at a funky pub for Aussie burger and chips! Check out this interior…

Due to an existing Australian restaurant, when Burger King launched in Australia it had to rename!

They also had some quirky versions of my sweet-tooth favs…triple kit kat chunky and Ben & Jerrys!

Shopping
Melbourne is the fashion capital of Australia with so many shopping centres and boutiques lining the streets. In the CBD there are the designer / fashion houses in Collins Street. At the top end of Collins Street (aka ‘the Paris end’) there is the ornate Block Arcade, built in 1891.

There’s a number of vintage / alternative stores along Chapel Street and Brunswick Street.

If you fancy taking shelter from the weather (I experienced a couple of icy wind days), head indoors to Melbourne Central, the Bourke Street Mall or the new Emporium centre.

Queen Victoria market – huge and full of interesting bits and pieces, though fairly touristy when I went – lots of ‘Uggs’ and cheap t-shirts! It has a lively night market during the summer on Wednesdays. The market is actually the largest open-air market in the southern hemisphere and has over 600 traders.

South Melbourne market – I actually preferred this market to the Queen Vic, its maze-like interior is packed full of stalls selling everything and anything!

Plus it’s surrounded by some tasty cafes!

There are quirky shops all around the city, selling things you never knew you needed!

And of course the waterproof money helps if you get stuck in a downpour!

Get sporty
Melbourne residents are sports enthusiasts with the Australian Football League (AFL) being likened to a religion – particularly as Australian Rules football was invented in the city.

I was fortunate enough to be invited to a game the the MCG (Melbourne Cricket Ground) where longtime rivals The Hawthorns played the Geelong Cats.

The ‘G’ is considered one of the world’s greatest sporting venues holding 100,00 people and home to AFL in the winter and cricket in the summer.

Other popular sports include horse racing (the Melbourne Cup), Formula One Grand Prix and cricket. Melbourne has been declared the “World’s Ultimate Sports City” 3 times in the last decade.

Interesting fact (well, depending on where your interests lie!) is that Melbourne was the first city to host the Olympic Games in the southern hemisphere in 1956.

Sightseeing
Melbourne is Australia’s second biggest city and cultural capital. It has been appointed as the world’s most livable city since 2011 and is highly rated in a number of areas, such as entertainment, healthcare and tourism.

It was founded in 1835 on the large natural bay of Port Phillip and this waterfront exposure can lead to you experiencing four seasons in one day! Arriving from the European summer in mid-August, I was taken aback by the cold windy whistling through the city’s mid-winter climate.

Melbourne’s central business district (CBD) is bordered by the Yarra River dividing the city (like London!) with a ‘Southbank’ area lining the river front, creating an entertainment and dining hub.

Further south is St. Kilda – home to sunny beaches and a lively bar and nightlife scene…just not when I was there mid-winter! Normally it’s considered the most Sydney-like area of the city due to its beachy vibe.

The main area that I spent my time was the city centre (Docklands) which encompasses the CBD and historical core just north of the river. This area is bursting with Victorian-era architecture, shops, museums, parks, cafes and people!

Public transport is good – plenty of trams, buses and trains to chose from, though I only really used the tram (and my feet!) - Melbourne actually has the largest tram network in the world!

Places to see, include:

Flinders Street railway station – the iconic colonial landmark of Melbourne on the corner of Flinders & Swanston street. A popular meeting spot for locals – “meet you under the clocks at Flinders station” was said to me more than once!

The Yarra River – nicknamed “the river that flows upside down” due to its brown colour, makes an easy and picturesque walk

St Kilda Pier – a popular walking and fishing spot. I ended up going here to watch the penguins dusk arrival because I didn’t have enough time to head to Phillip Island. However, in the winter there isn’t much activity and I only saw 3 penguins!

St Kilda Esplanade – the promenade which is full of walkers, skaters and sunbathers (in the summer!)


The Lanes – these historic lanes and arcades are full of shops and cafes – and street art! I spent hours just wandering through (& sipping on cups of delicious and warming coffee) The impressive street art covered many of the laneways in graffiti, murals and posters – even Banksy was here (though the local council painted over one of them!) The best lanes were Hosier Lane and AC/DC Lane. You can book a tour, to bring it to life: melbournestreettours.com / meltours.com.au / walktoart.com.au.

Impressive skyline – Melbourne actually has 5 of the 6 tallest building in Australia, with Eureka Tower being the tallest

Federation Square – a modern and popular meeting space near to Flinders Street station and opposite St Paul’s cathedral, originally the Melbourne residents weren’t very keen on this congregation area but it seems to have now been accepted as a place for celebrating, protesting and relaxing. It is home to the Ian Potter Centre, the ACMI (Australian Centre for the Moving Image) and the Melbourne Visitor Centre – and free wifi! It also has daily (and free) tai chi at 7.30am.

Other things to do in the area, which I didn’t get around to were to visit Grampians National Park, The Great Ocean road, Phillip Island and the TV set of ‘Neighbours’....next time!