Posted by The Hungry Traveller on 20:49 in Europe Food Travel | Comments : 2

Having decided that today was a designated lazy day we had a lie-in before our freebie breakfast - a slightly random combination of milk, bread, jam, egg, feta and butter. Next up was beach time… 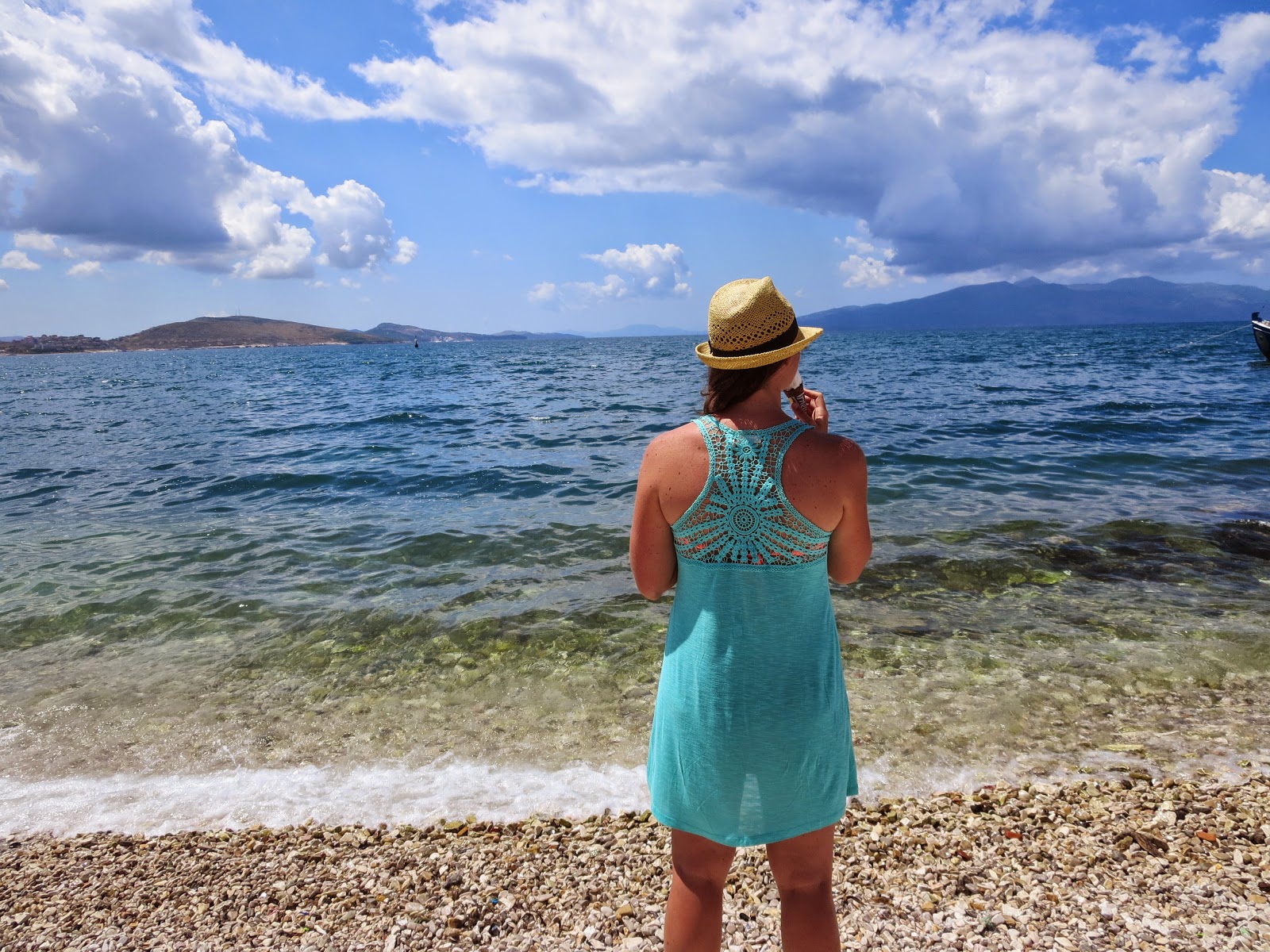 We relaxed all morning, admiring the bright blue sea and views to Corfu. 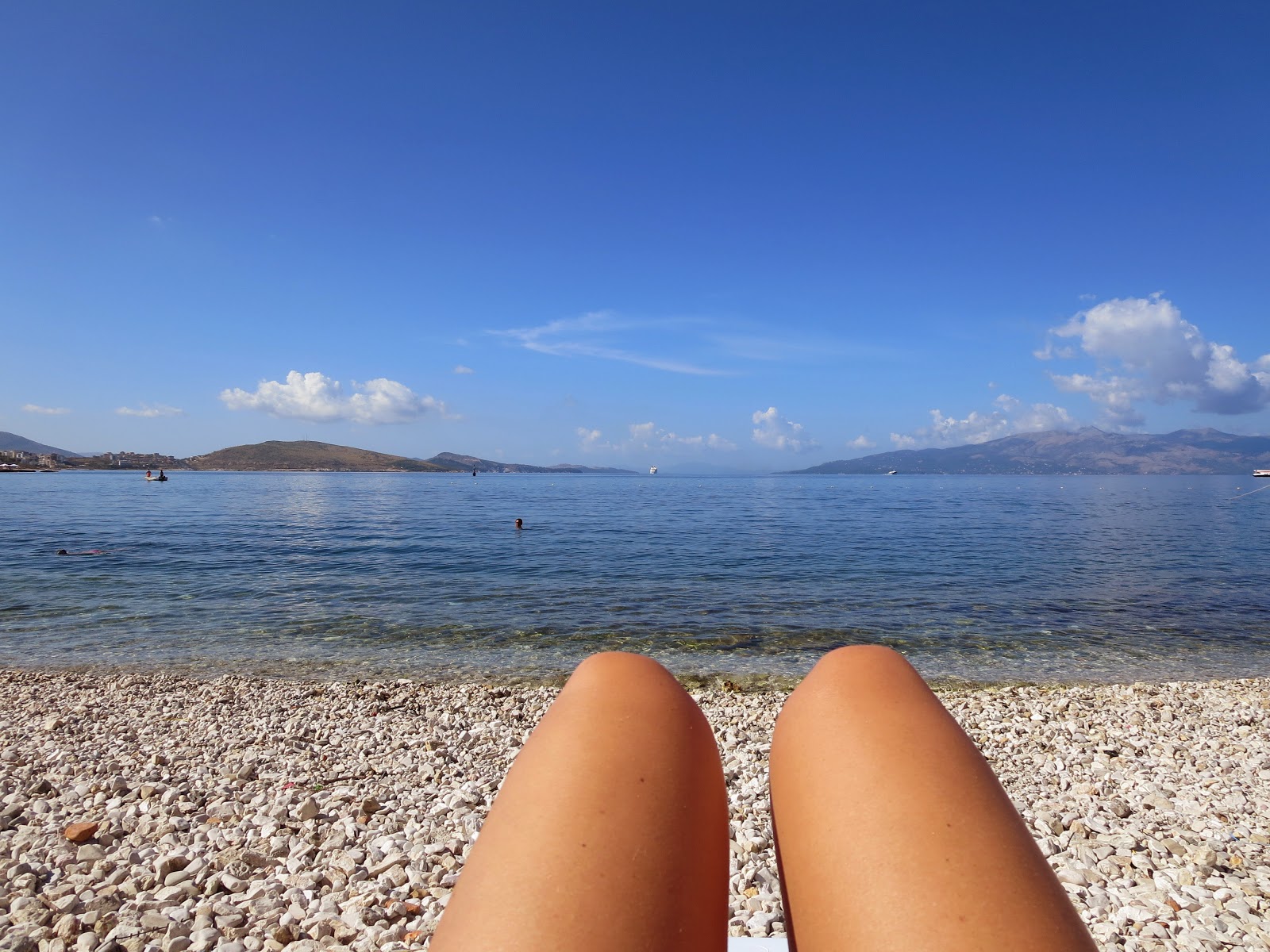 Lunchtime and we headed to a bakery for a spinach byrek (or Börek) - a popular Balkan pastry originating in Turkey made from filo pastry (or yufka dough) filled with cheese, meat or vegetables.

We went to a cute market stall and stocked up on afternoon snacks - cherries, plums and a random Albanian walnut cookie - to accompany a pre-departure drink. 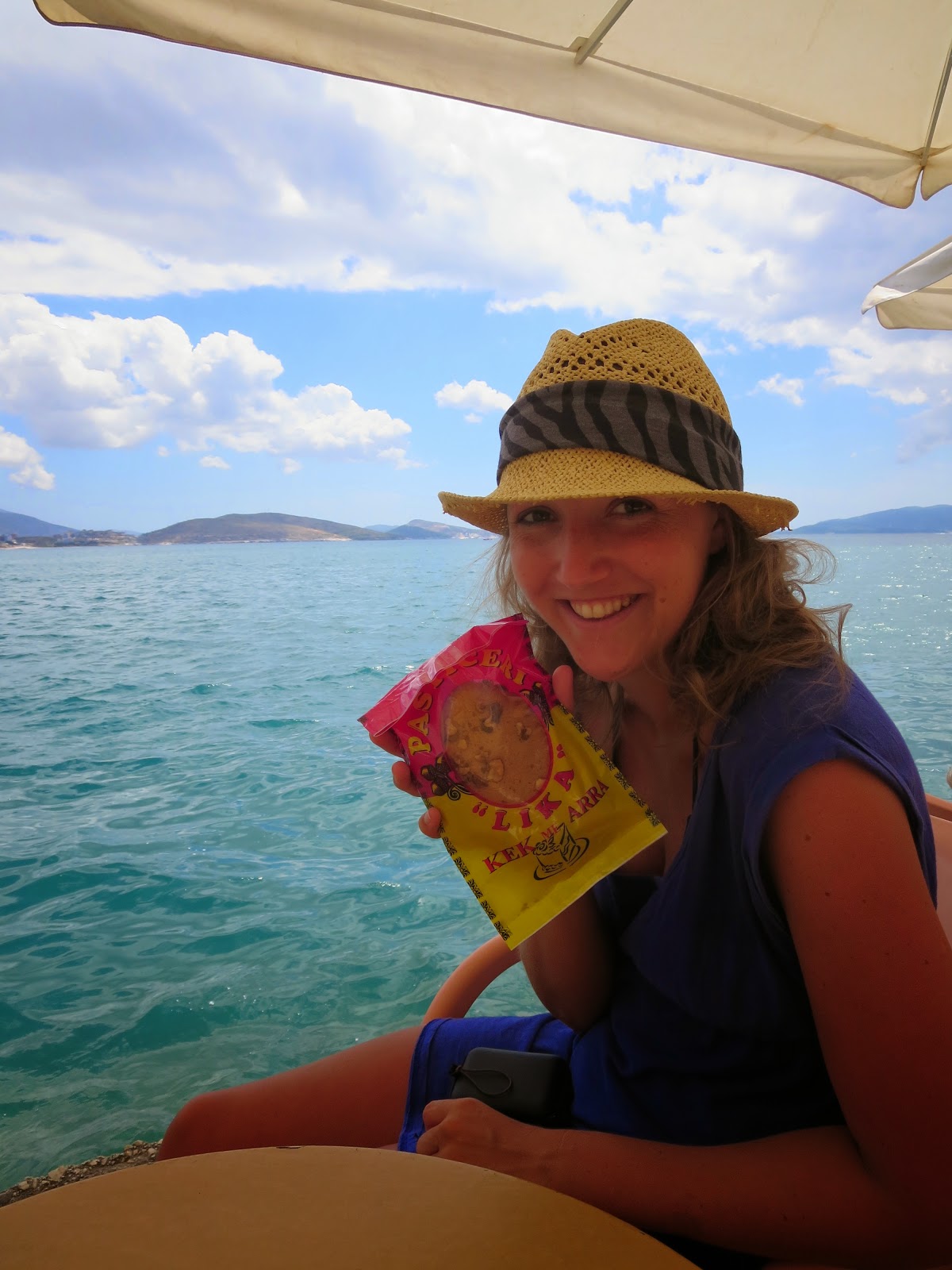 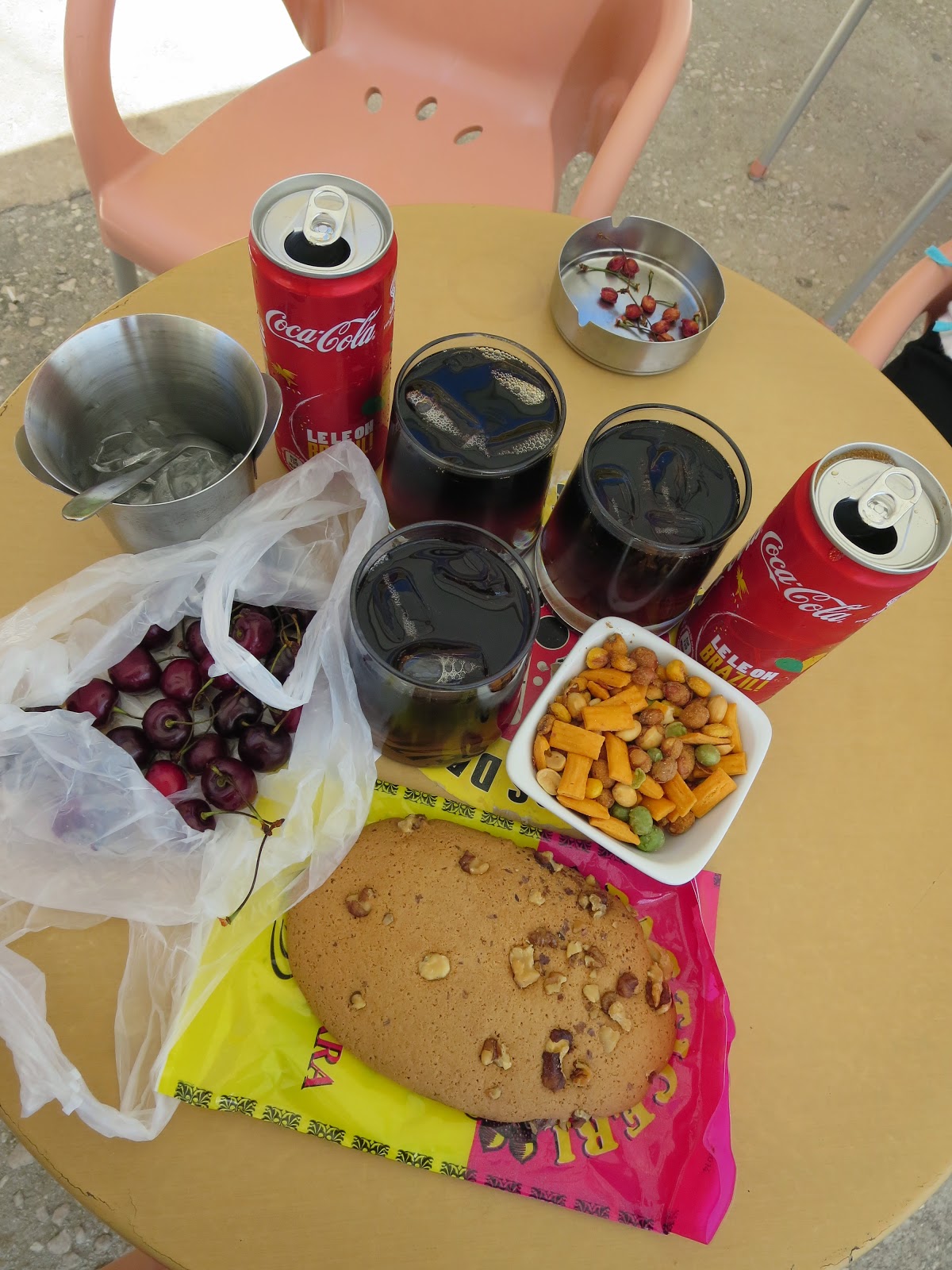 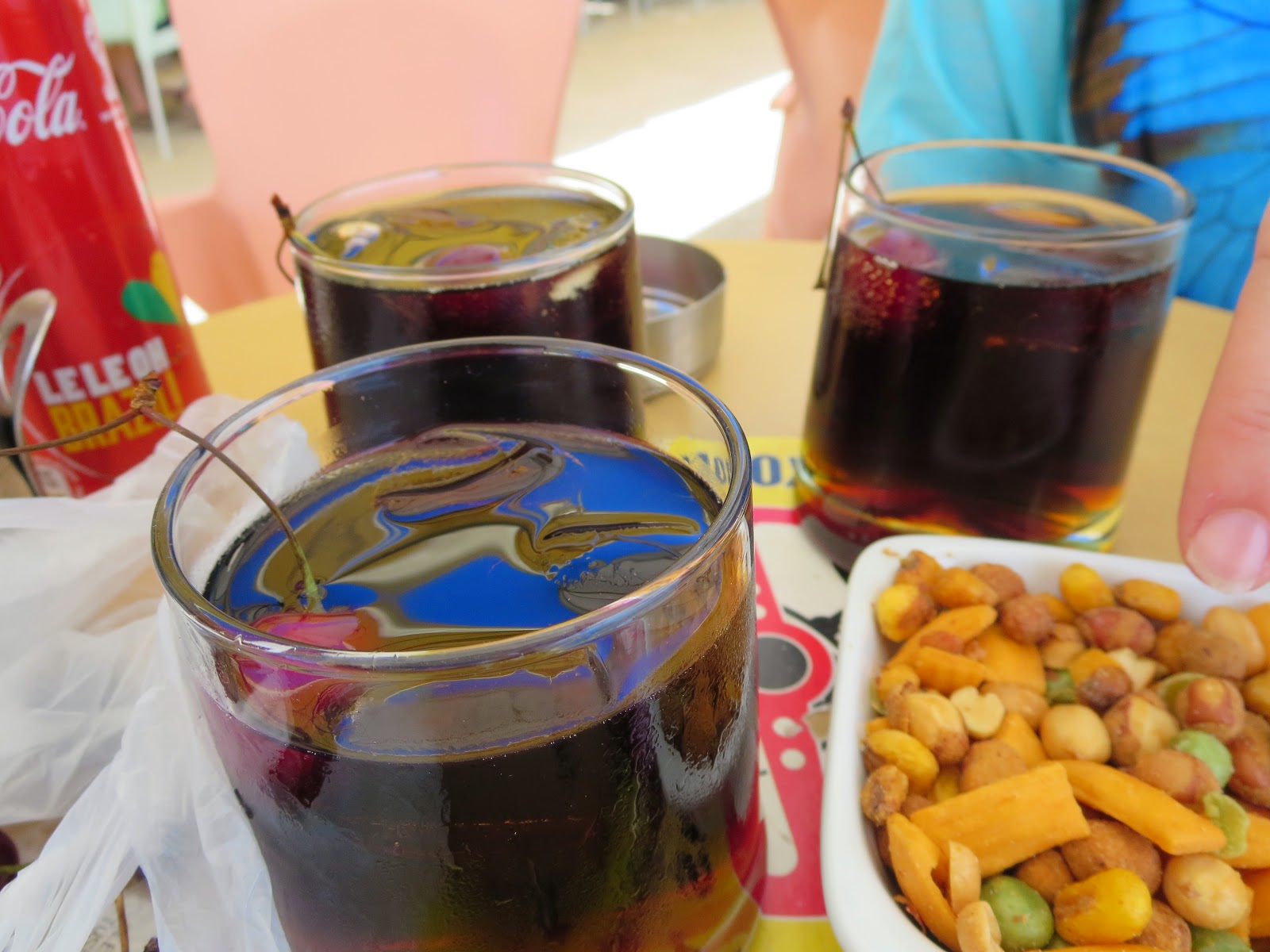 Not long later we caught the 1hr ferry boat over to Corfu (Kérkyra / Κέρκυρα in Greek)   considered Greece’s most beautiful island. 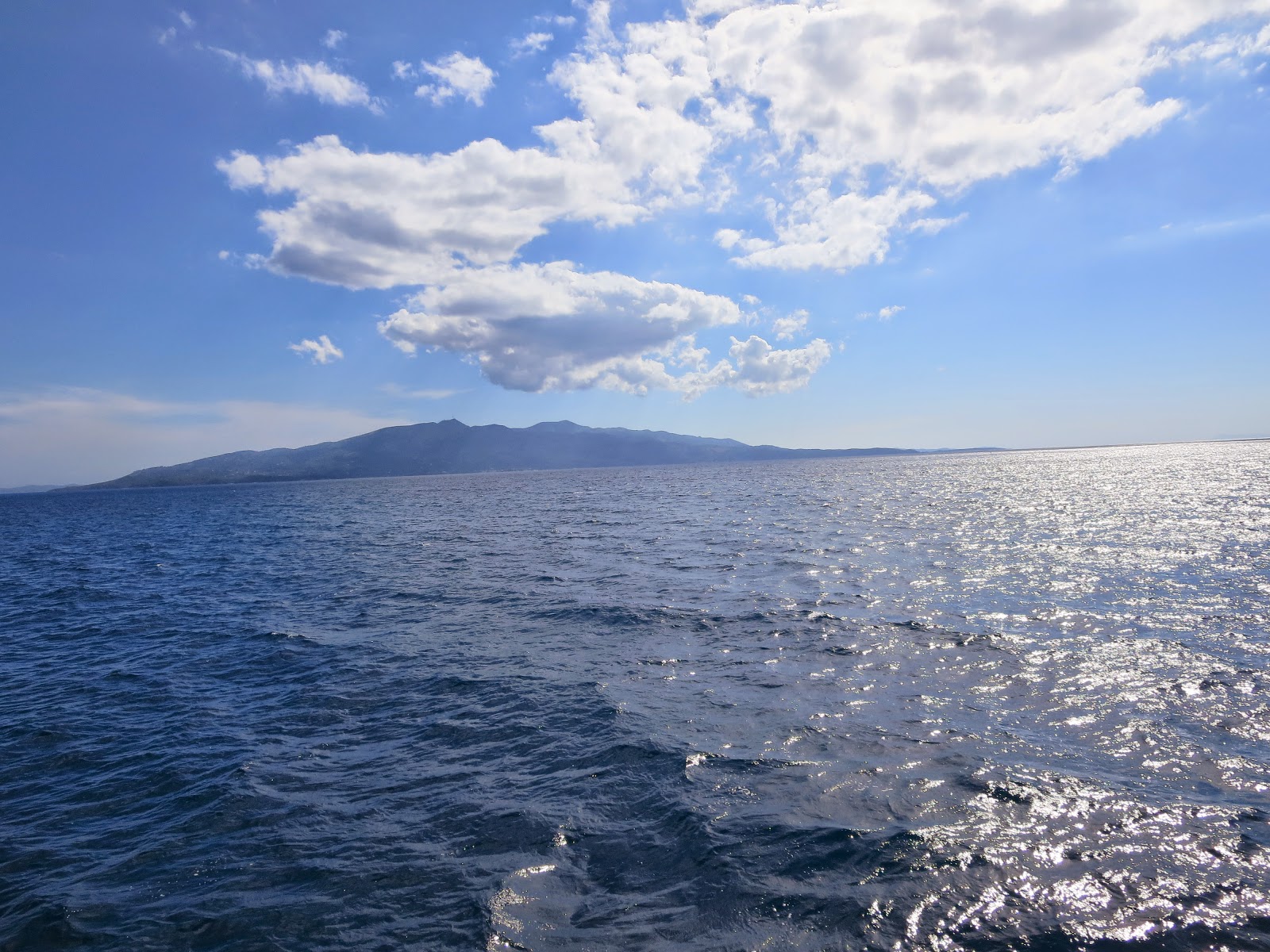 Corfu is the 2nd largest Ionian Island, a group of islands, traditionally called the Heptanese, i.e. "the Seven Islands”. Corfu’s Greek name comes from mythology: Poseidon, god of the sea, fell in love with a nymph called Korkyra (daughter of Asopos, an important river) and abducted her, bringing her to the island. He named the island after her and, over time, Korkyra become Kerkyra. Their child was called Phaiax, which gave the name to the islands inhabitants ‘Phaiakes’, earning Corfu the nickname ‘The Island of the Phaeacians’.

Ditching our bags in the hotel and freshening up, we went for a wander into the Old Town, pausing to admire the waterside sunset and sample some Ouzo. 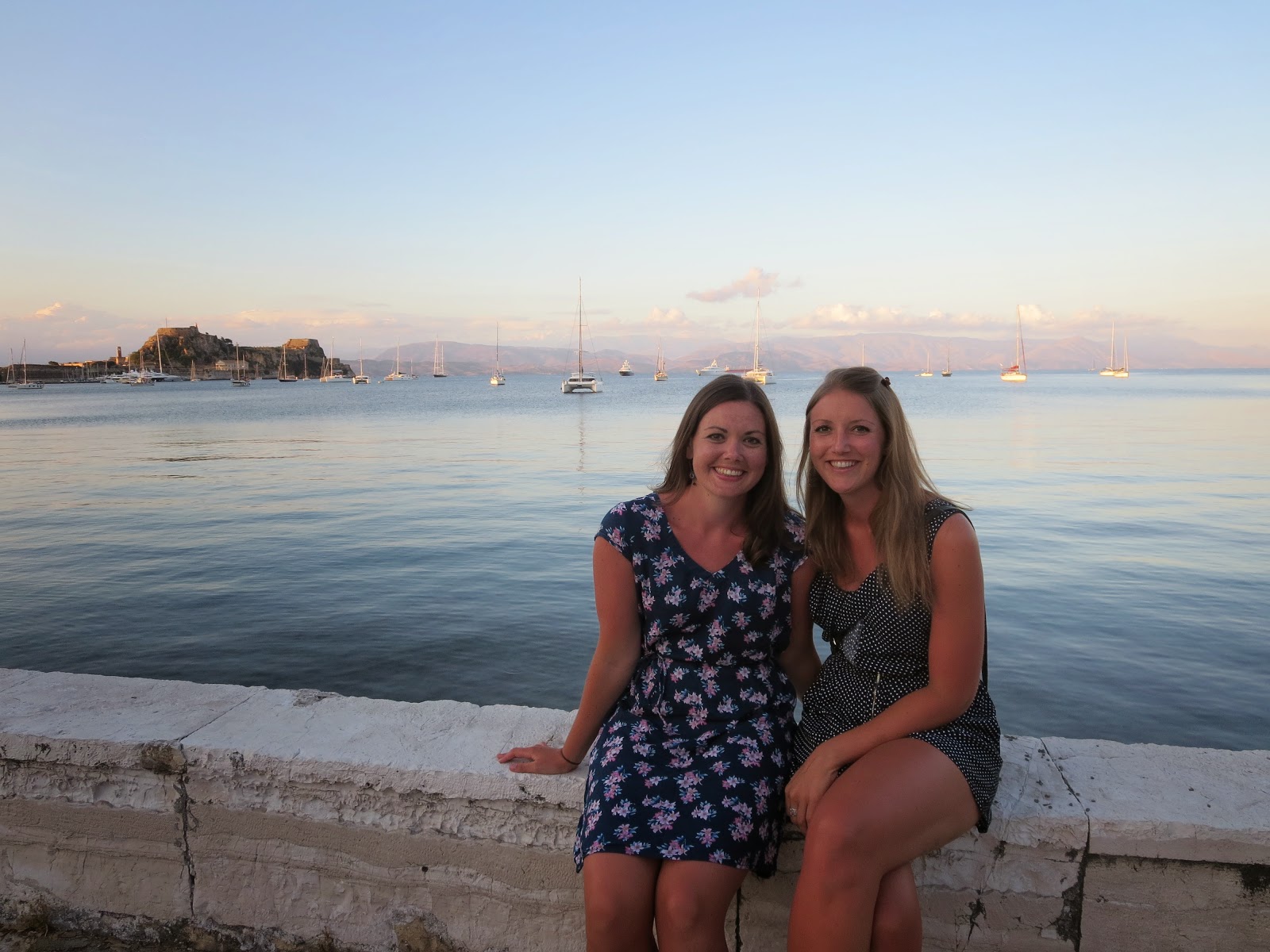 Apparently the way to drink it is predominately by adding water and ice, turning the clear liquor cloudy, and then sipping the aniseed-flavoured drink. Personally I’m not a fan!

We continued our walk into the Old Town, admiring the boats and distant fortress.
Cutting through the Spianáda, part town square and part park, we found ourselves on Liston street in the central of the town. This impressive promenade is lined with arcades and was formally reserved for aristocrats, but now is home to cafes and bars. It was built in 1807 by a Frenchman and it’s design was inspired by the Rue de Rivoli in Paris. 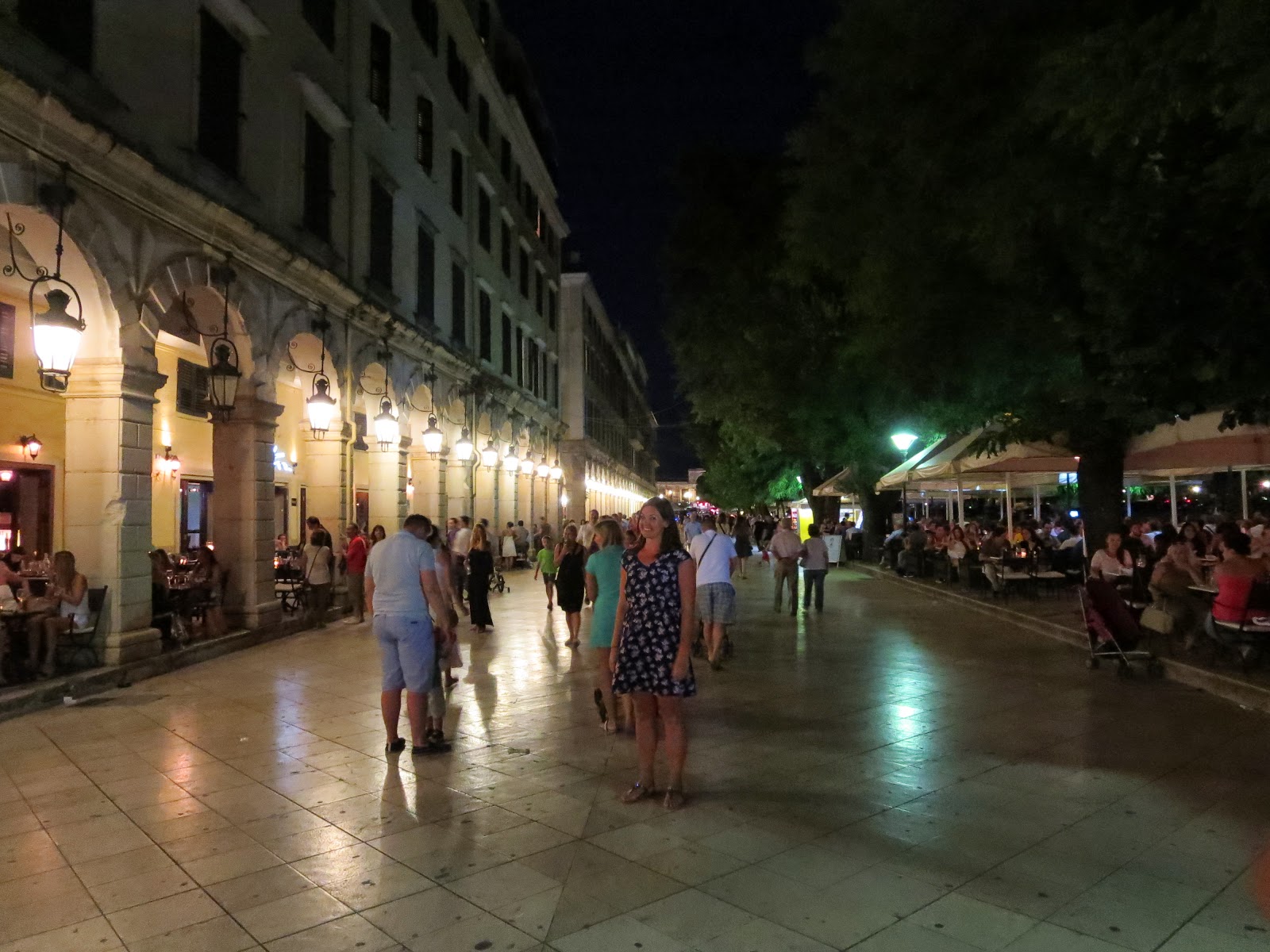 We stopped at Liston Cafe to celebrate our arrival into Greece with cocktails, soaking up the lively evening atmosphere.

We chose the most Greek-sounded cocktails: Negroni (gin, martini rosso & campari) and Alexander (brandy, crème de cacao & milk) to enjoy as we people-watched. 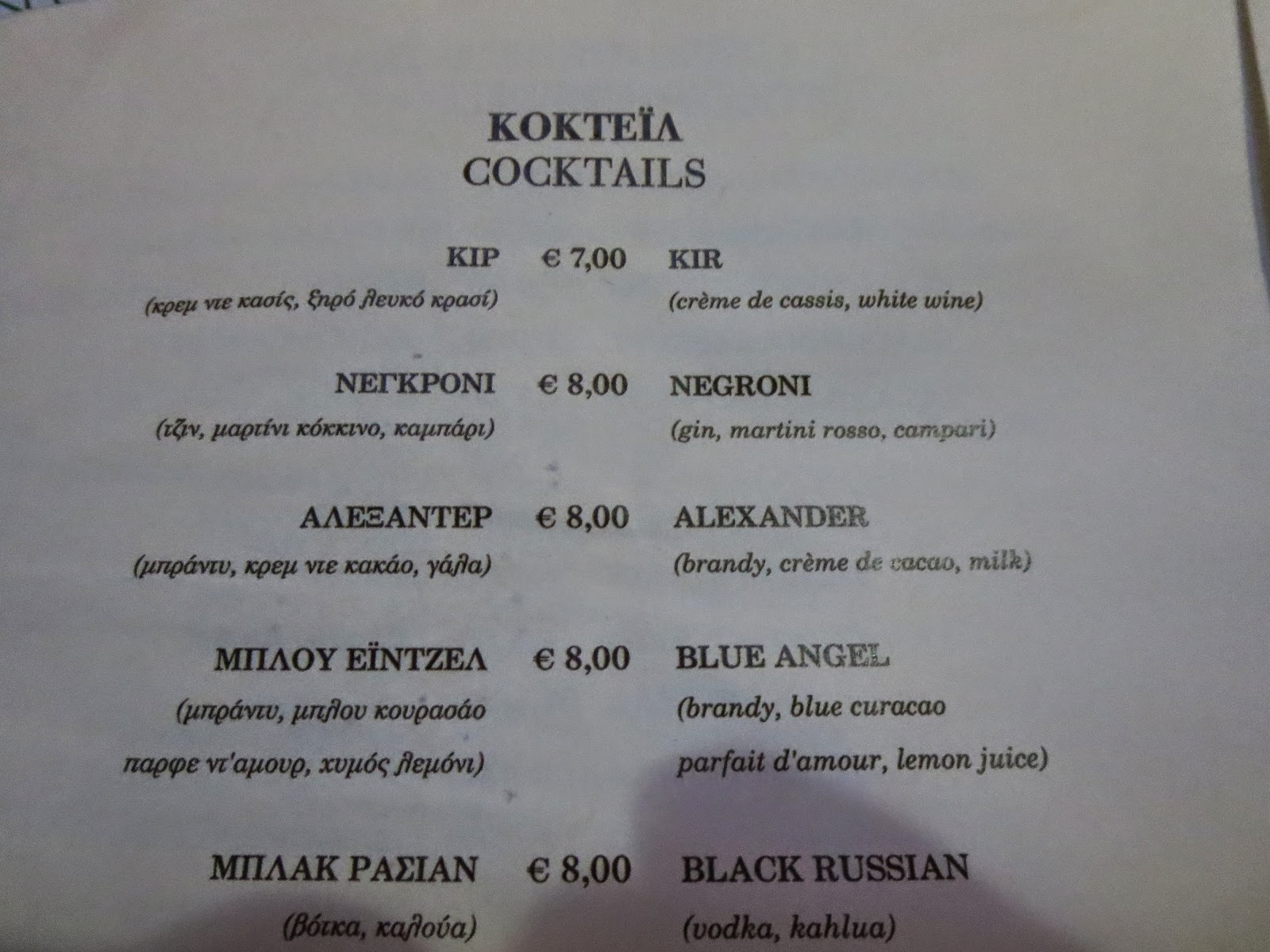 We wandered through the bustling windy old streets and squares, full of shops and stalls.
Samples were offered regularly of local produce, including olive oils, olives, olive tapenade and fig rolls.

The highlight, however, was the local speciality of kum quat! These bright orange fruits have been cultivated in Corfu since 1924 and are used in a number of ways - eaten raw, used in cooking, as sweets, in jams and syrups - but best of all as a liquor! 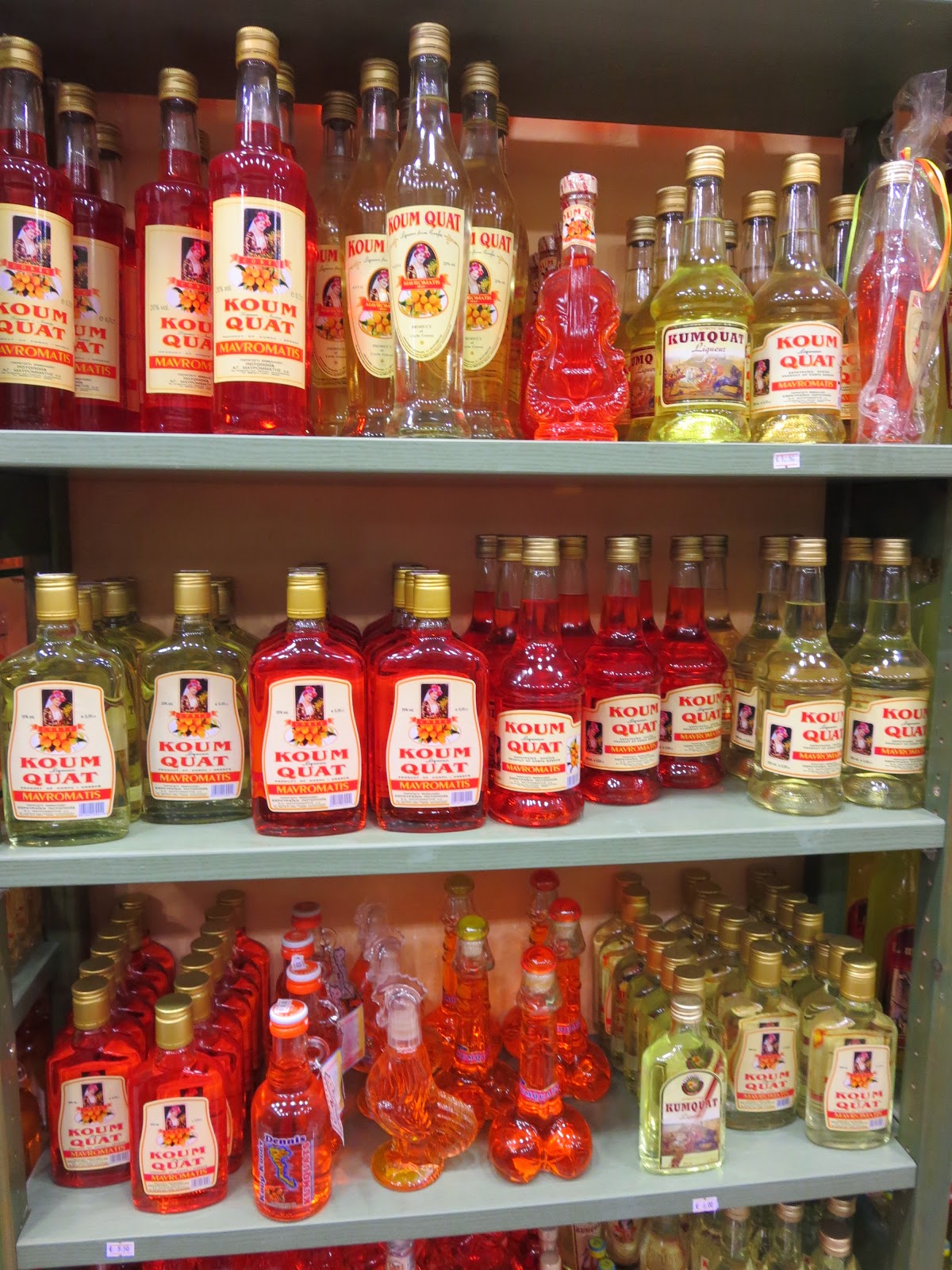 I’d never seen or even heard of this before so was eager to try and was delighted to discover a sweet tasty drink - plus I’m sure it’s good for you as the fruits are rich in vitamins ;)

This island is the only place in Greece where you can really find this liquor, due to the fruit growing, so we bought a small bottle to enjoy later in our trip.

Having worked up a hunger, we went for dinner at ‘Mic Mac’  a fast food restaurant where we had the most amazing dinner on the street.

We split a gyros pitta and chicken souvlaki - heaven!


Gyros pitta is a greek dish of meat roasted and carved from a vertical split (derived from the Turkish diner kebab) and wrapped in pitta bread served with chips, tzatziki, onion, salad and tomato.

It was the tastiest thing I may have ever eaten!

The meat rotates in front of the heater, kept moist, fatty and crisp by adding strips of fat and adjusting the heat strength and distance between meat and heat.
Buzzing from our foodie heaven we headed to Greco bar for some more drinks. Enamoured with the kum quat liquor I request a non-menu kum quay martini while my sister opted for the random ‘brample’. 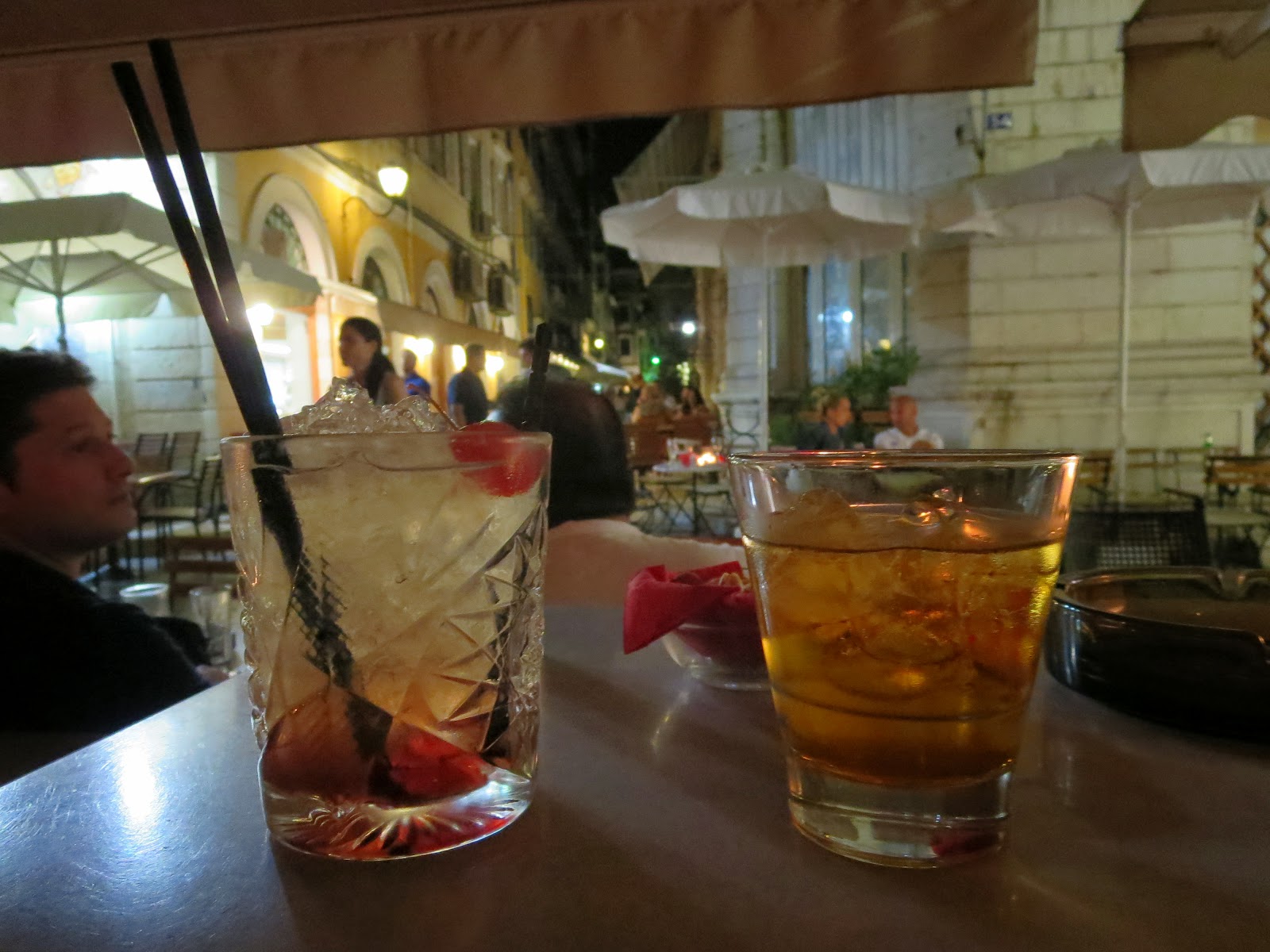 We people watched and re-lived the deliciousness of our gyros pitta before the heavens opened and we grabbed a taxi back to our hotel. 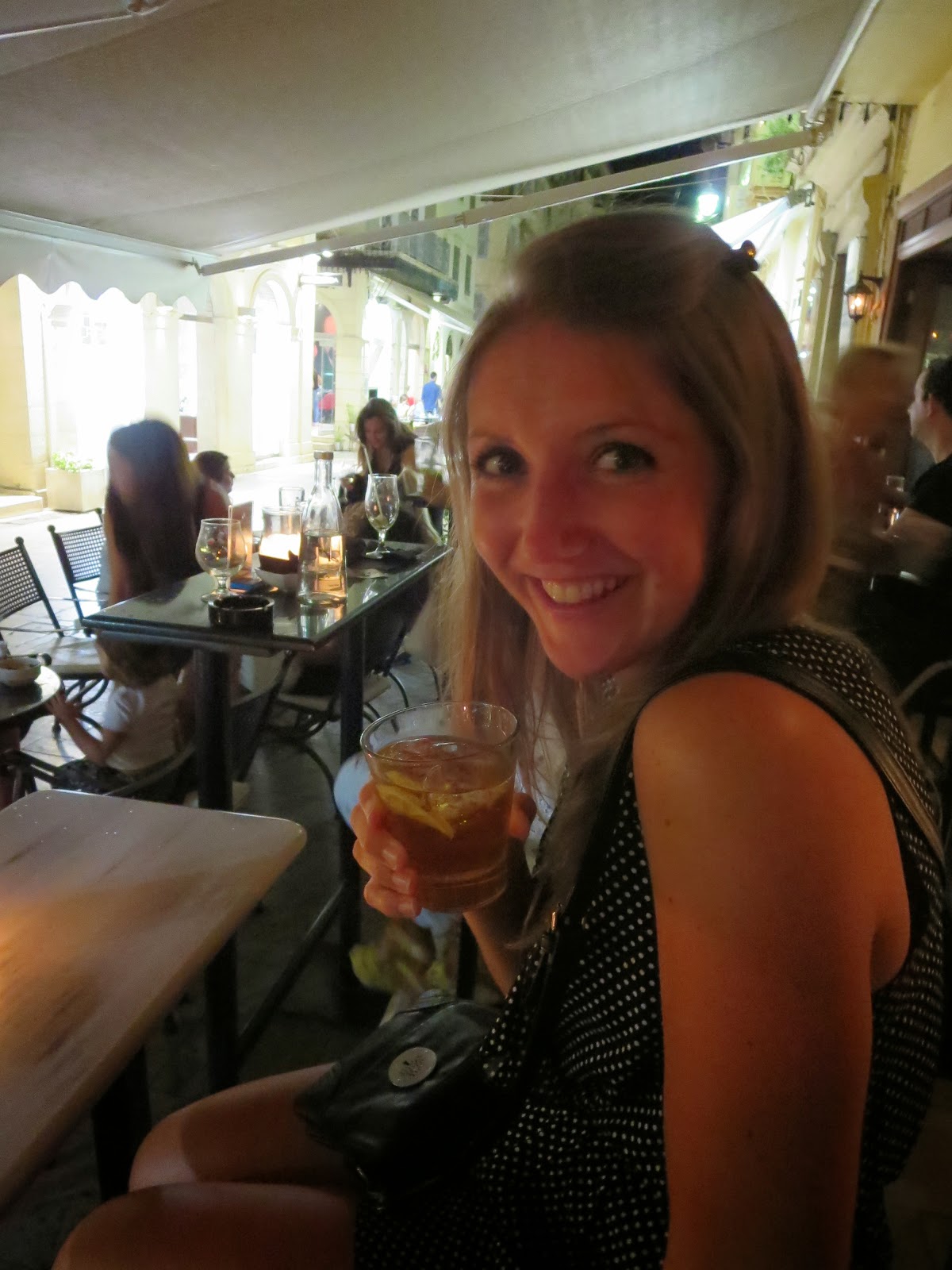 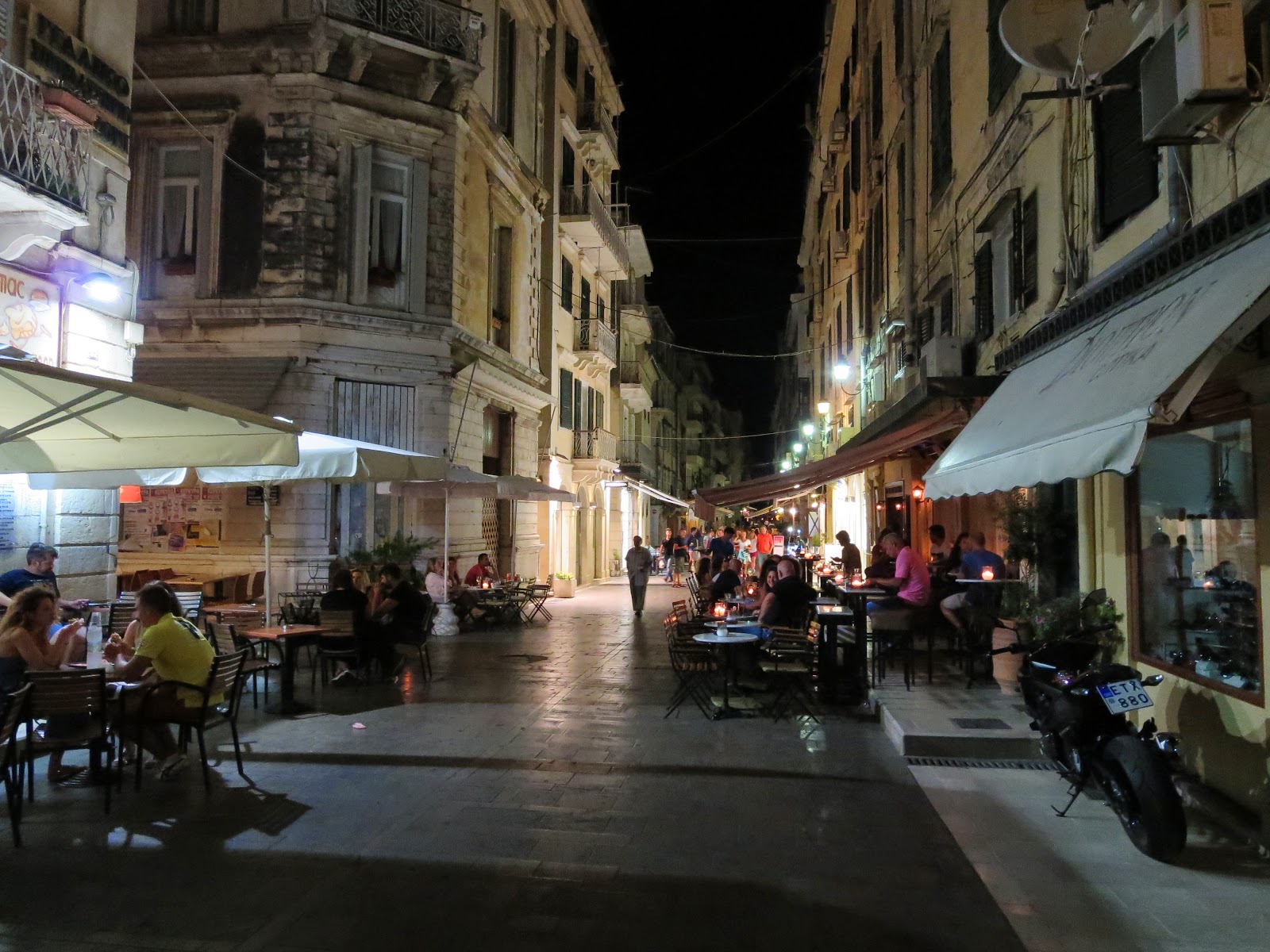