Happily heading back to the coast

Posted by The Hungry Traveller on 20:29 in Europe Food Travel | Comments : 0


After the relentless dusty hairdryer heat of Tirana, we were delighted to be heading back to the coast today.  We hired a bus from Tirana to Saranda, Albania, with the route taking us via Eastern Albania and into the Unesco World Heritage–listed town of Gjirokastra.

On the way we spotted more bunkers, Greek road signs and roads leading to Macedonia - it literally felt like we were in the middle of lots of countries!

We stopped in the city of Gjirokastra for lunch - a hillside town with chunky limestone roads and imposing slate-roofed houses, offering views out over the Drina Valley and the hometown of the former dictator Enver Hoxha. 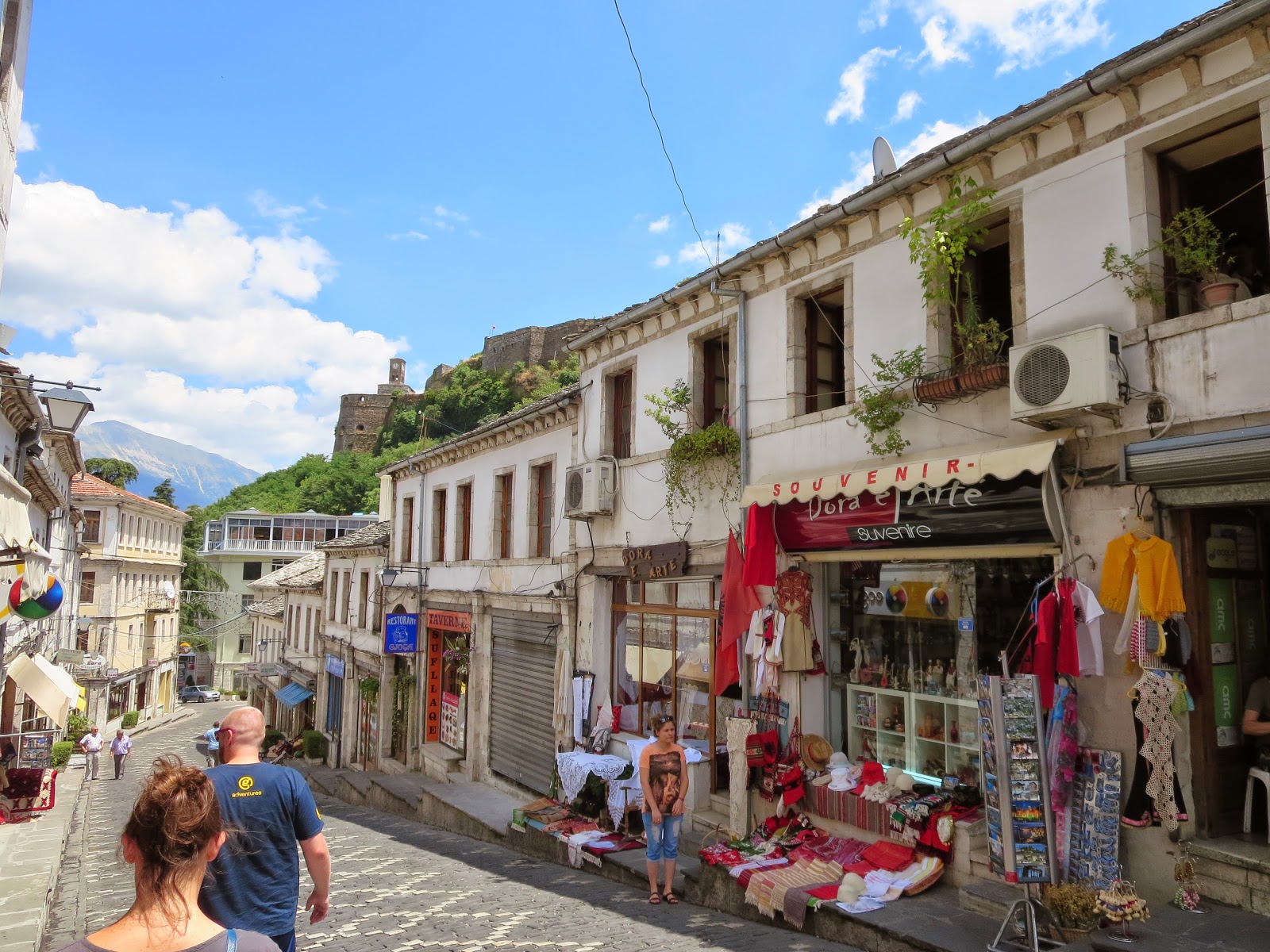 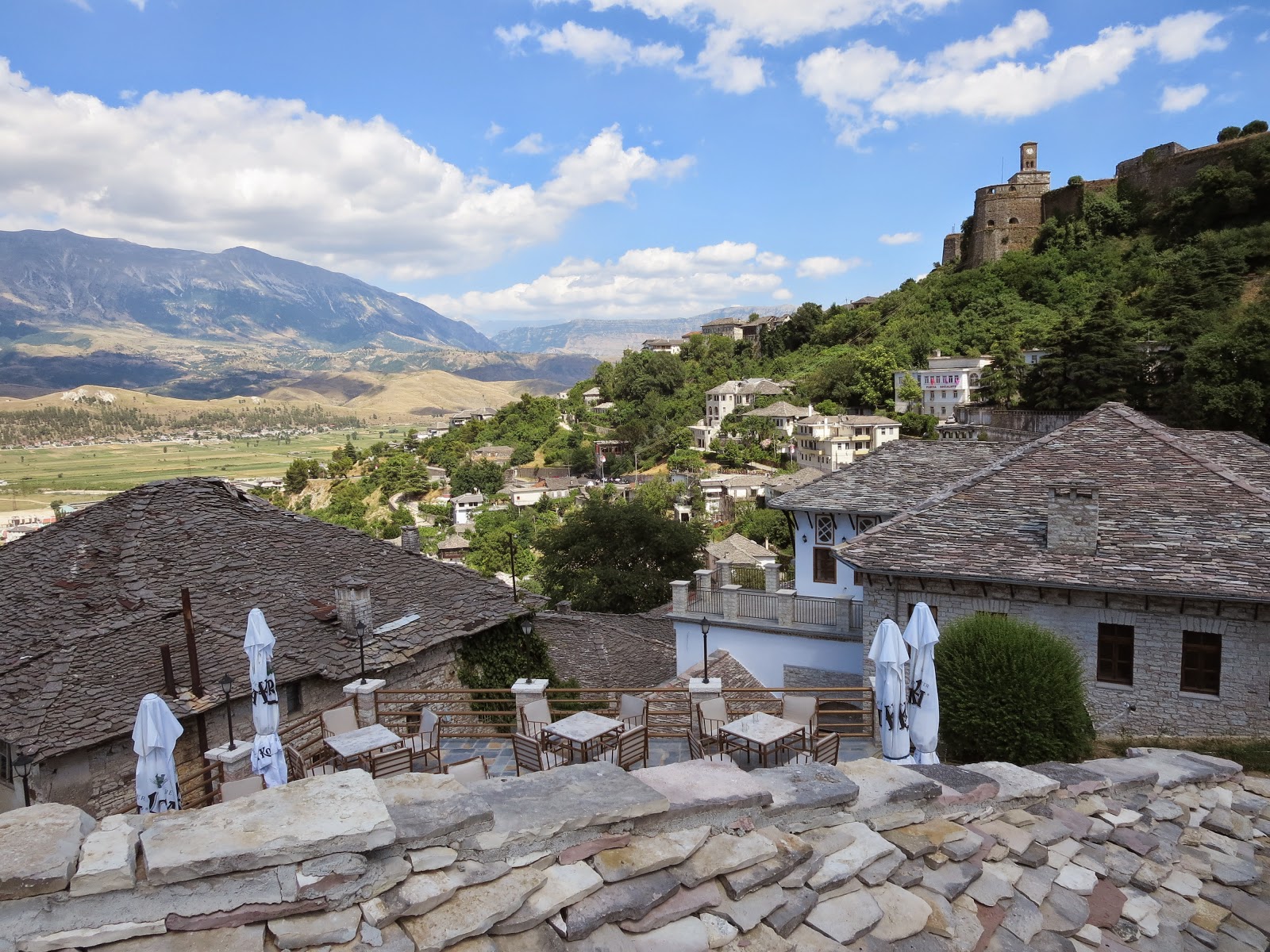 Before exploring, had lunch at a great shady relaxed restaurant recommended to us by the bus driver - Kujtimi in the Bazar district of the Old Town. 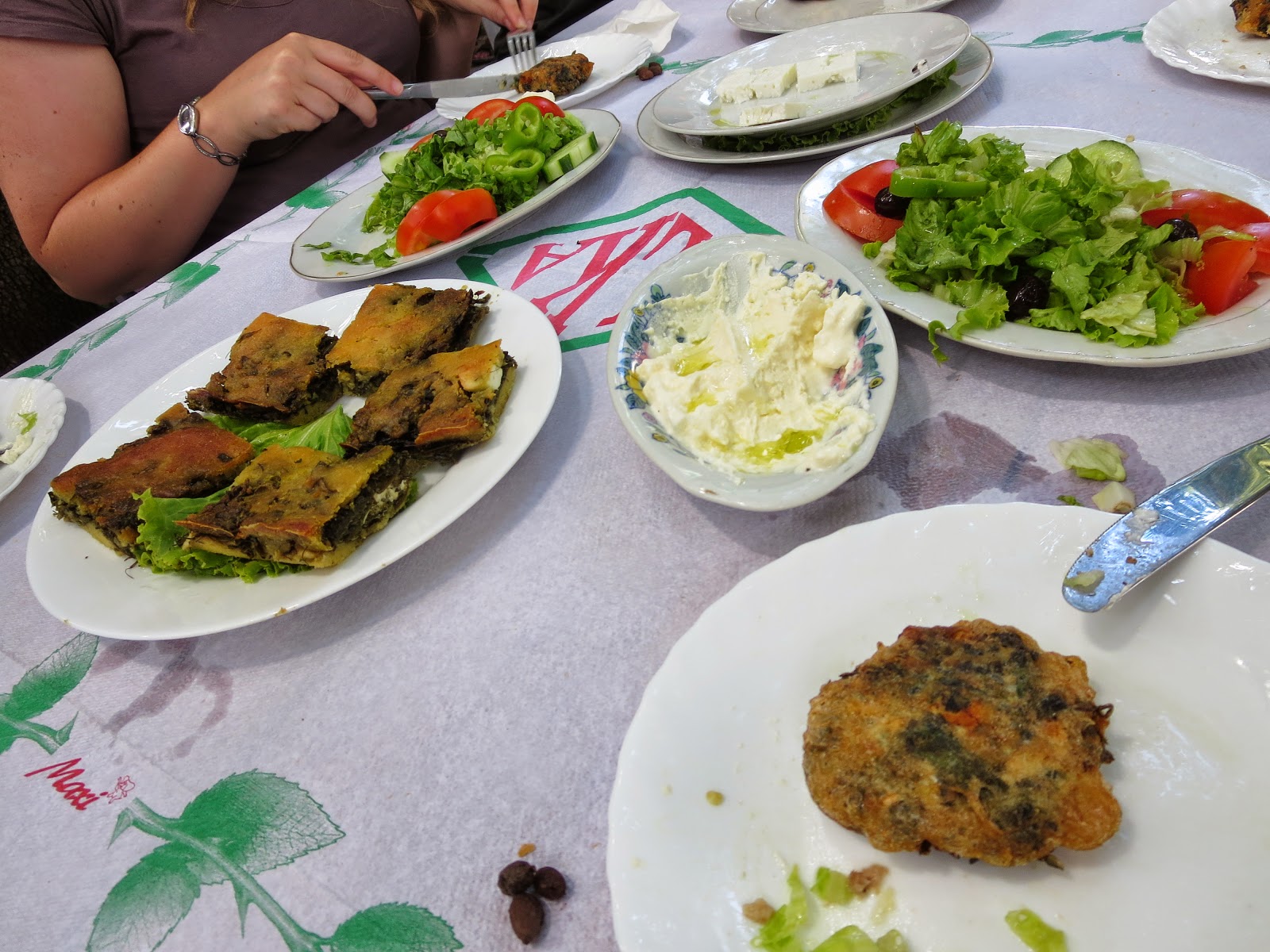 Revived by copious and tasty food we hiked up the hill to Gjirokastra Castle.

A fortress has been here since the 12th century but most of whats left is from the 19th century. We had great views over the Drina Valley and rooftops from the top. 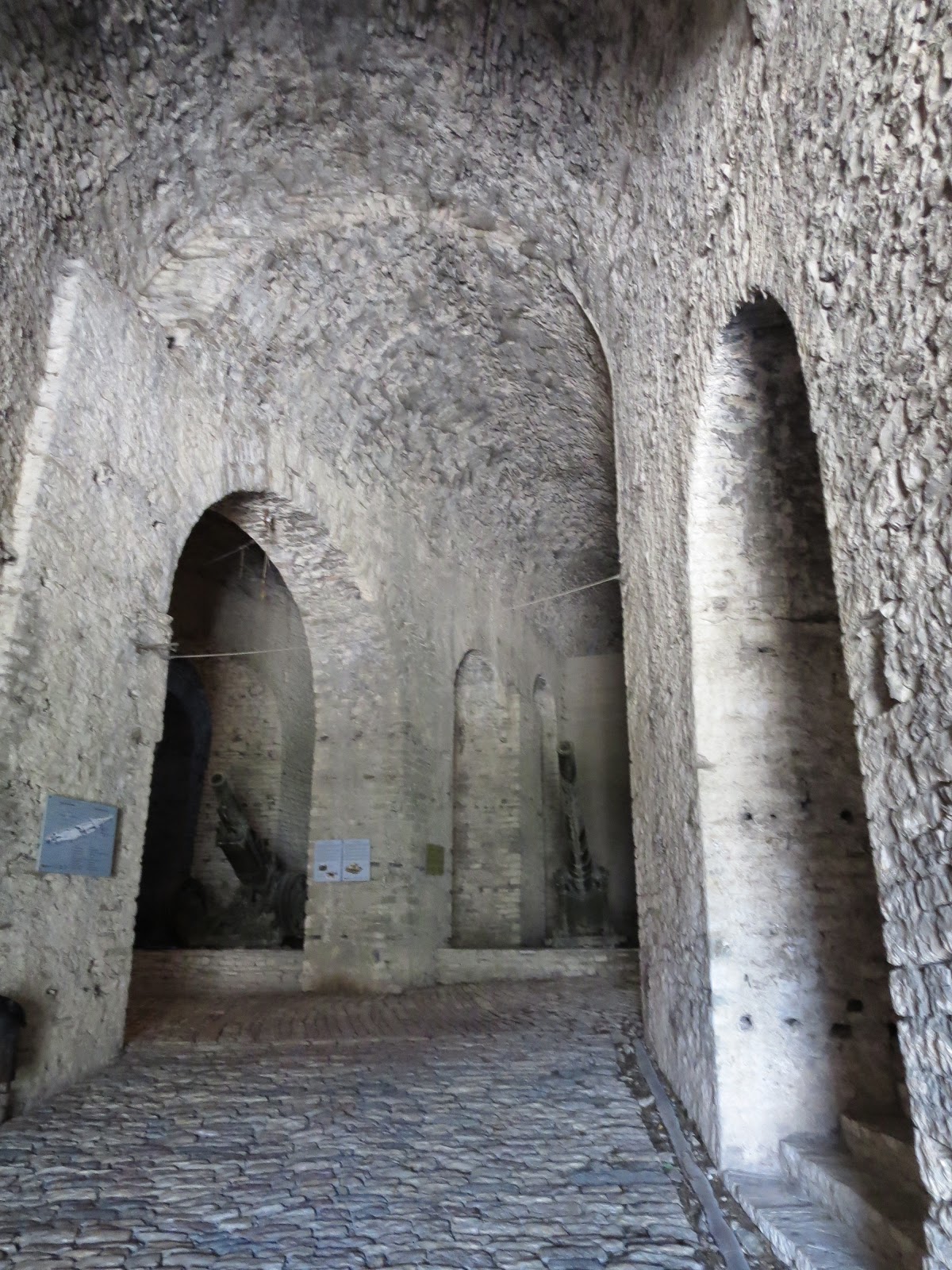 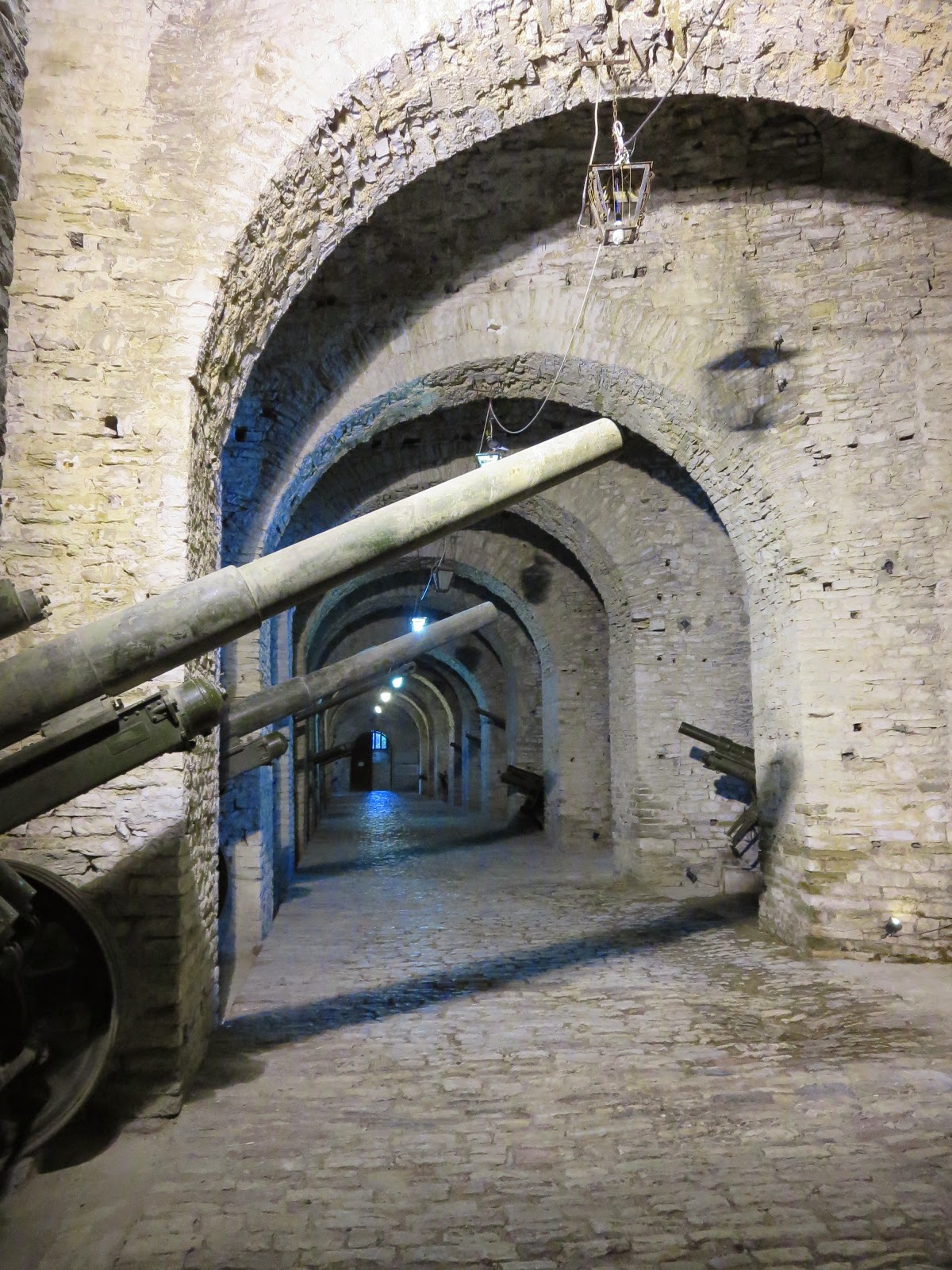 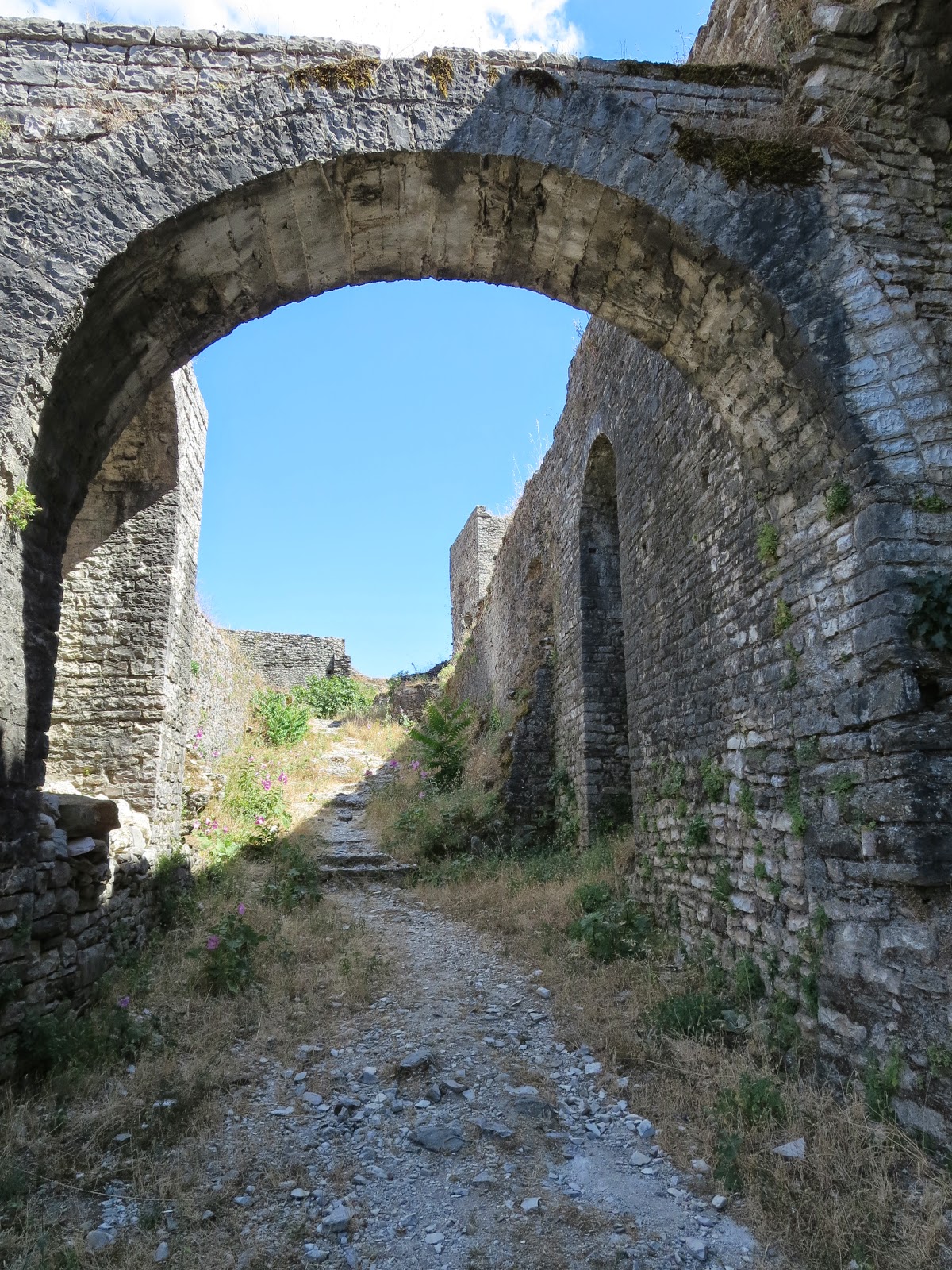 It also hosts the town’s folk festival every 4-5 years and a US airplane. 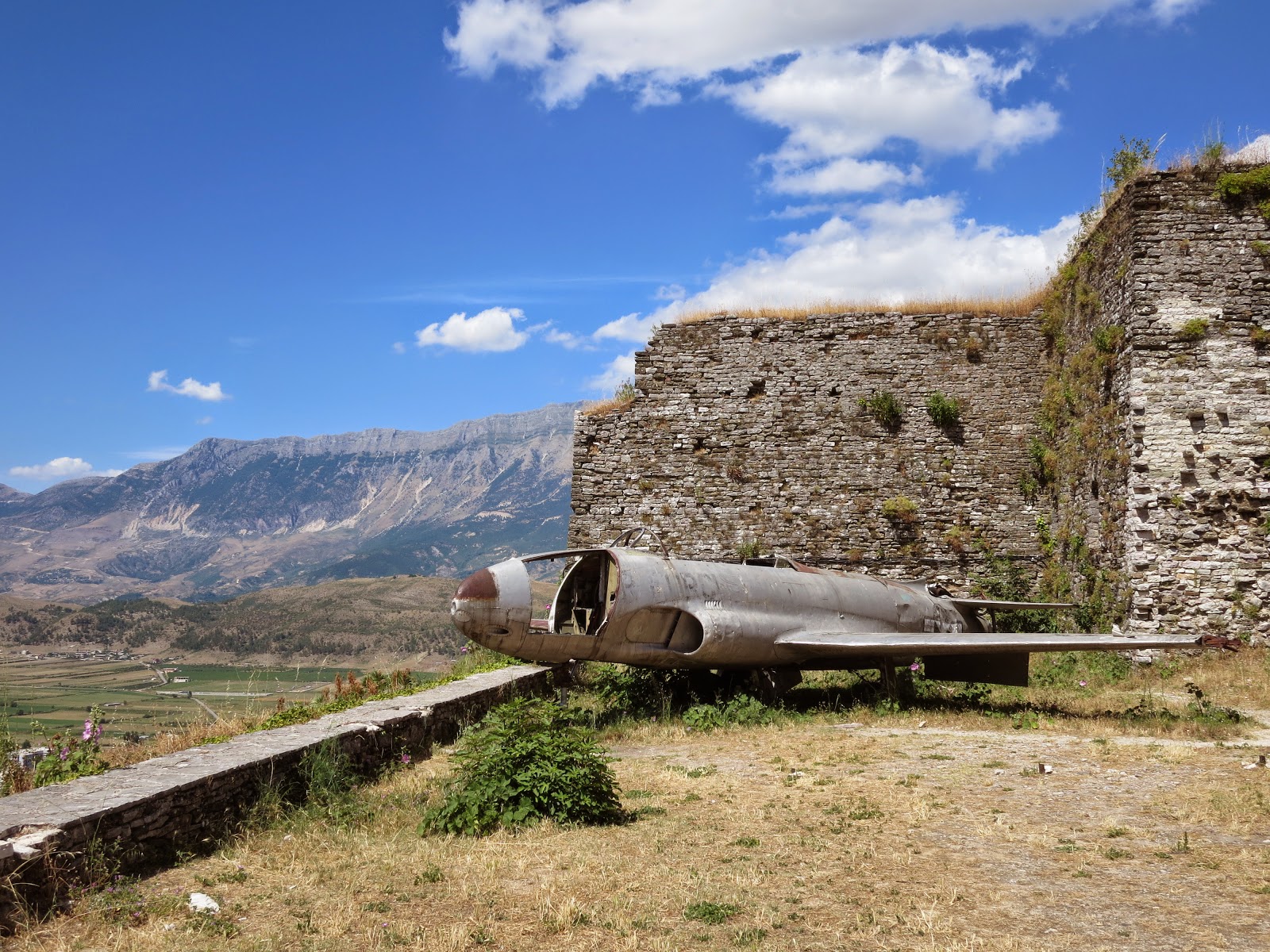 Continuing on towards Saranda, we stopped at the Blue Eye Spring (Syri i Kaltër) - a bizarre natural water spring with unknown depth (over 50m!) which pumps water into the Bistrica River.

It was a gorgeous setting, surrounded by blue dragonflies and bright green flora.

One final stop on our journey gave us impressive viewpoints over Corfu and Saranda before we headed down the hills to the coast.
Not long later we arrived in Saranda, a promenade dominated beach town. Our hotel gave us a great view over the sea!
Washed and changed we headed out for a drink to enjoy the sunset with. Unfortunately we chose the entertainingly named “wine in bulk” (verë e hapur e bardhë) which was disgusting! 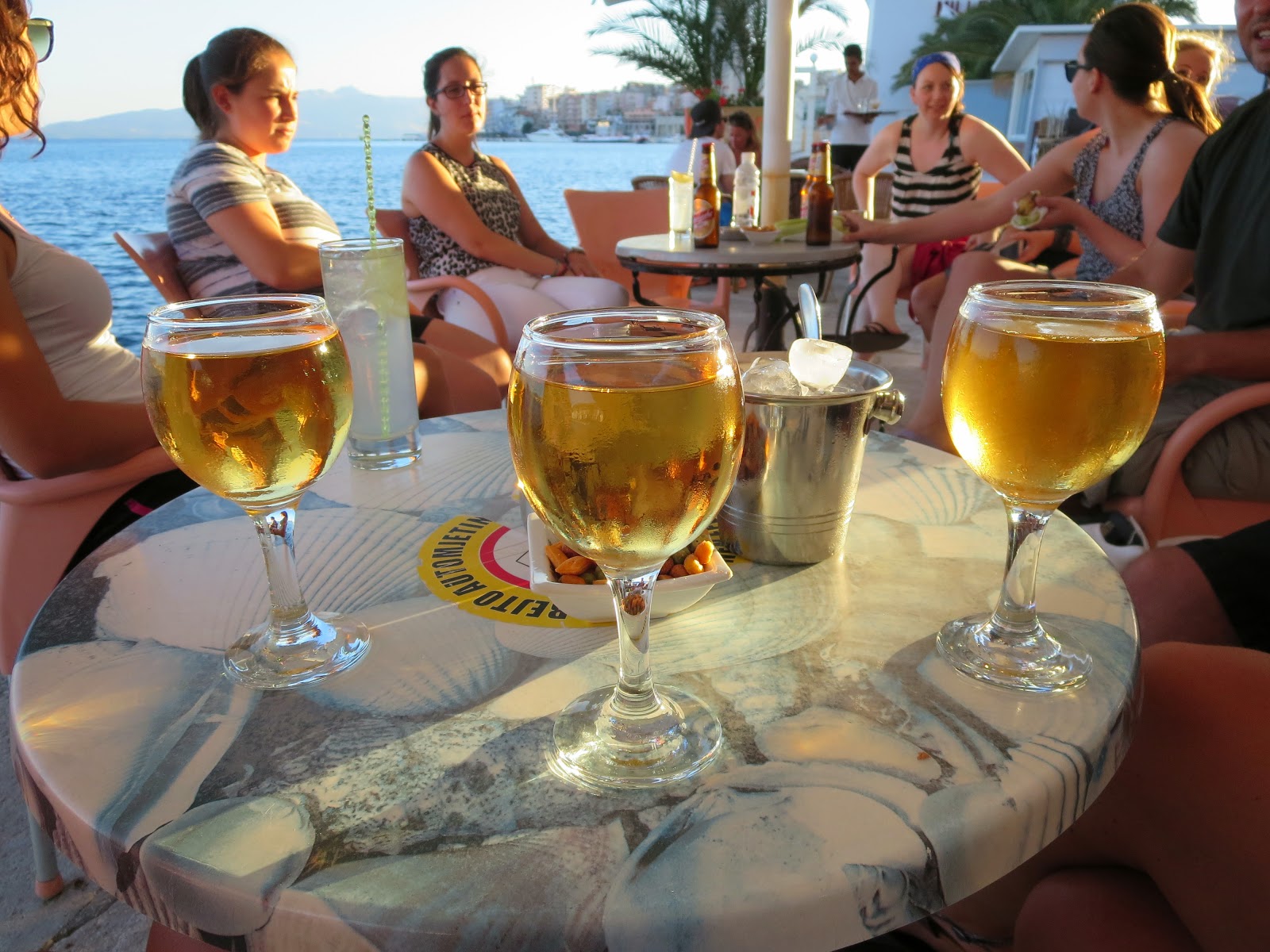 So we swapped to the far-tastier Disaronno & coke combo to admire the sunset with...

For dinner we had kiln-baked calamari and chips… 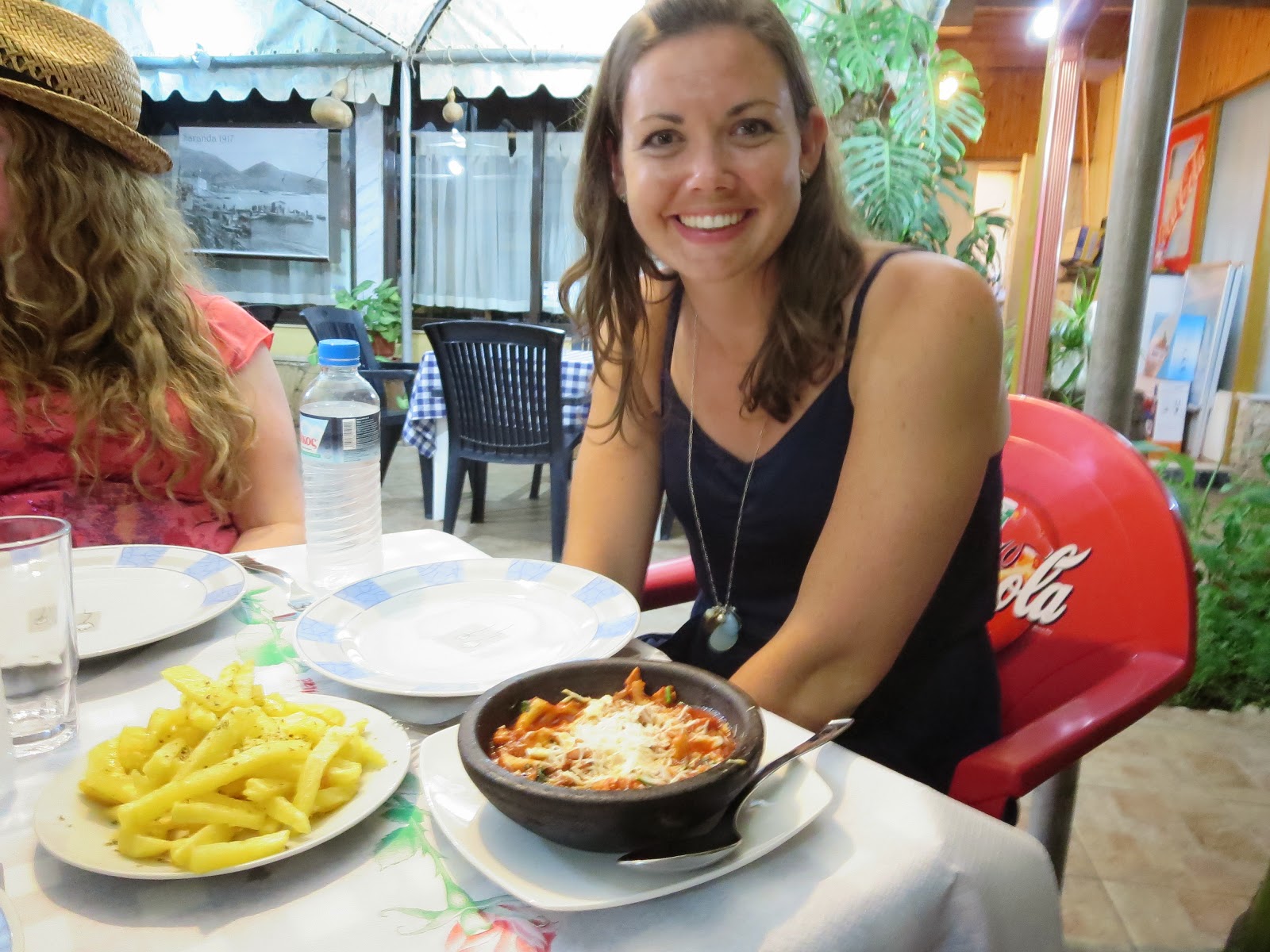 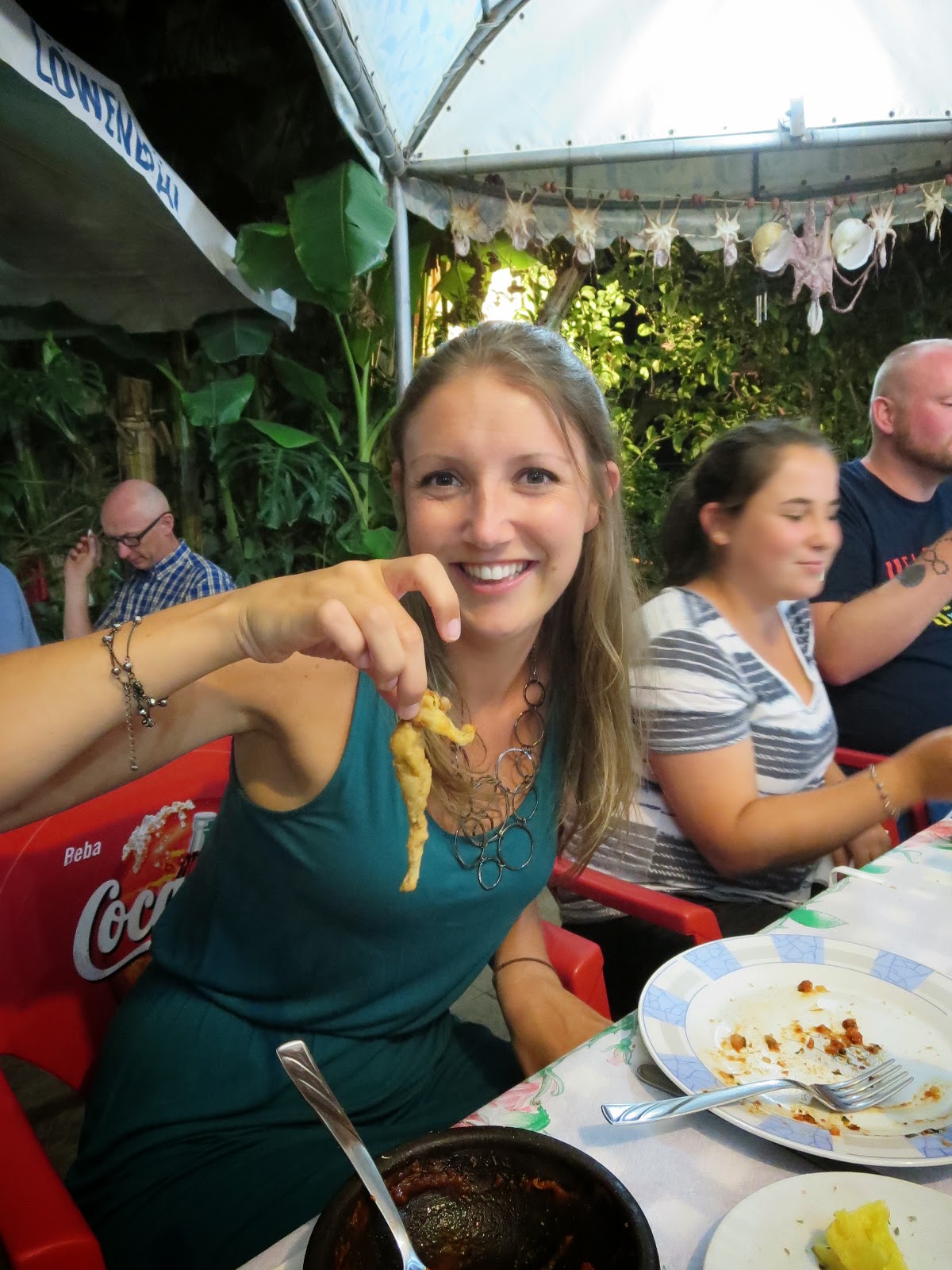 There are 4 main streets which follow Saranda’s bay, including the waterfront promenade that becomes prime xhiro (evening walk) territory in the evening and are closed to traffic, so we strolled along here whilst snacking on a ice-cream and planning our next day.

There isn’t masses to do in the town - it’s mostly a (stoney) beach destination, as well as housing the ancient archaeological site, Butrint, so we decided to have a lazy beach session before heading over to Corfu.