Posted by The Hungry Traveller on 03:00 in Food Germany Travel | Comments : 0

The sun was shining and I decided to embrace the German fitness obsession and head out to the English Gardens, just down the road from my Munich apartment in Schwabing. 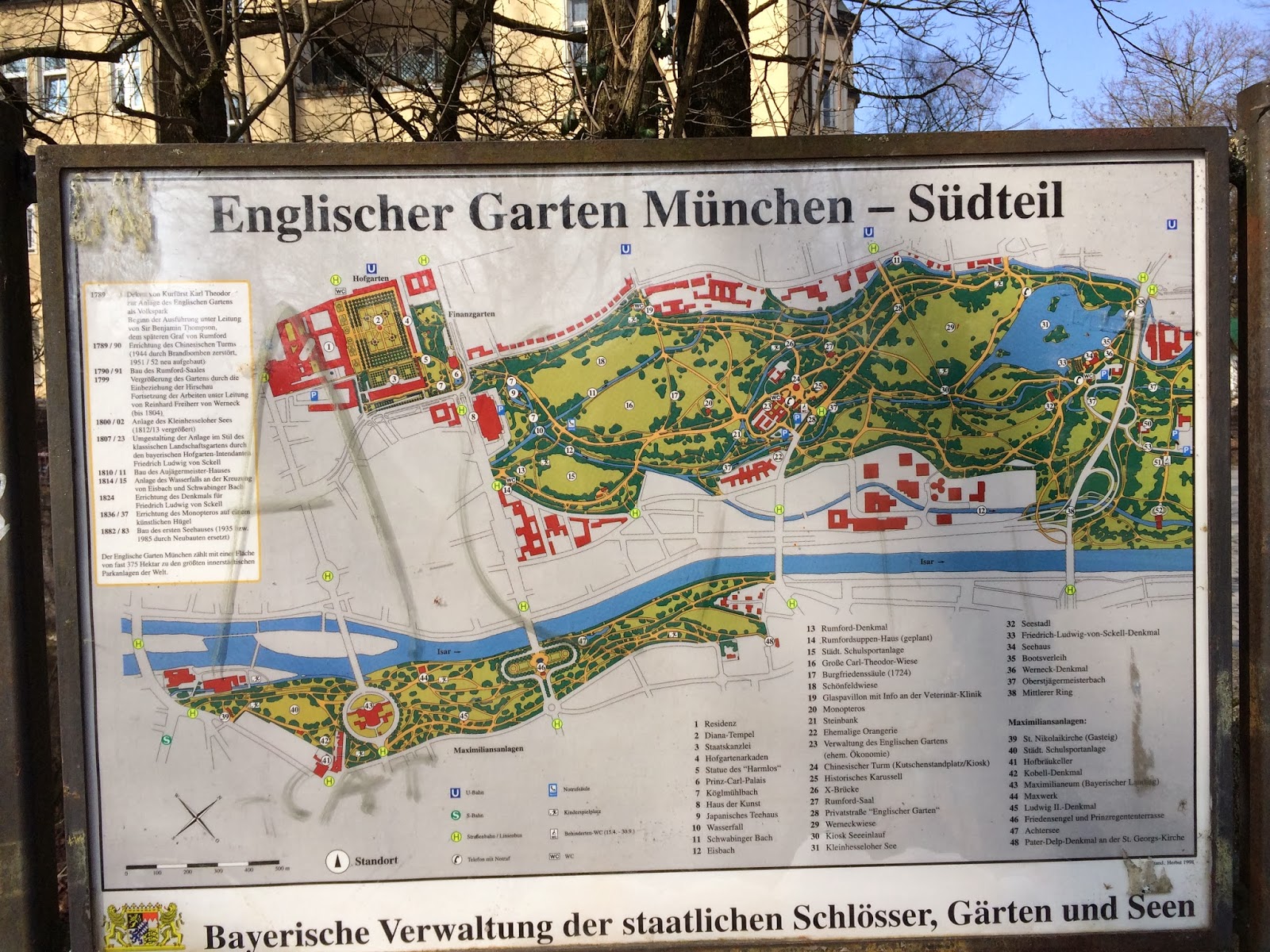 The English Gardens are one of the world's largest city parks (even bigger than Hype Park or Central Park!) with much sought after houses and apartments over-looking them. 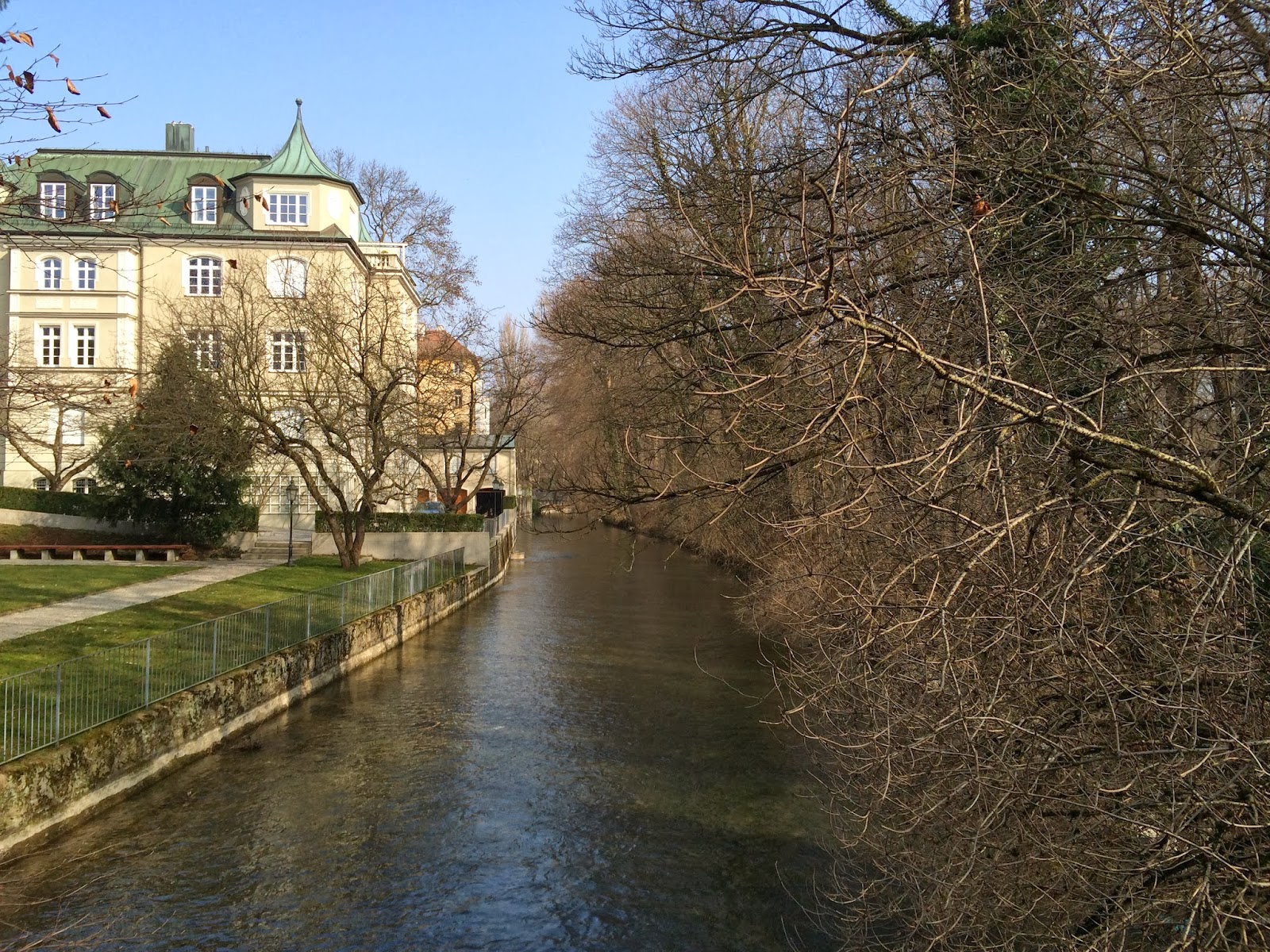 The gardens are essentially full of joggers, cyclists, dog-walkers and walkers...everyone out and about enjoying the good weather and fresh air!  Apparently in the summer it's perfectly normal to see naked sunbathing here...I cycled around, avoiding the hordes of cyclists with child carriages, heading to the ‘Kleinhesseloher See’ – the lake in the middle of the gardens. 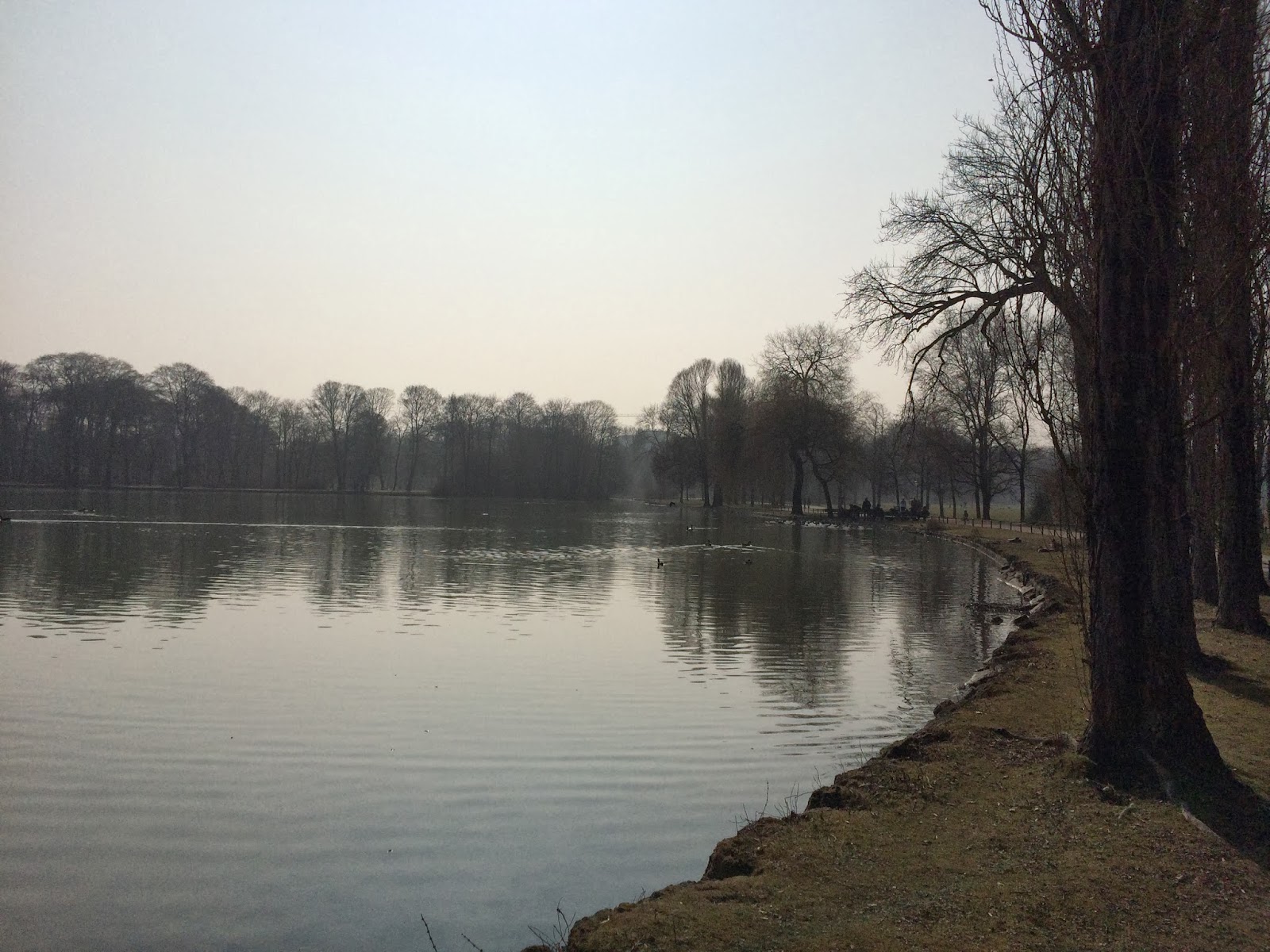 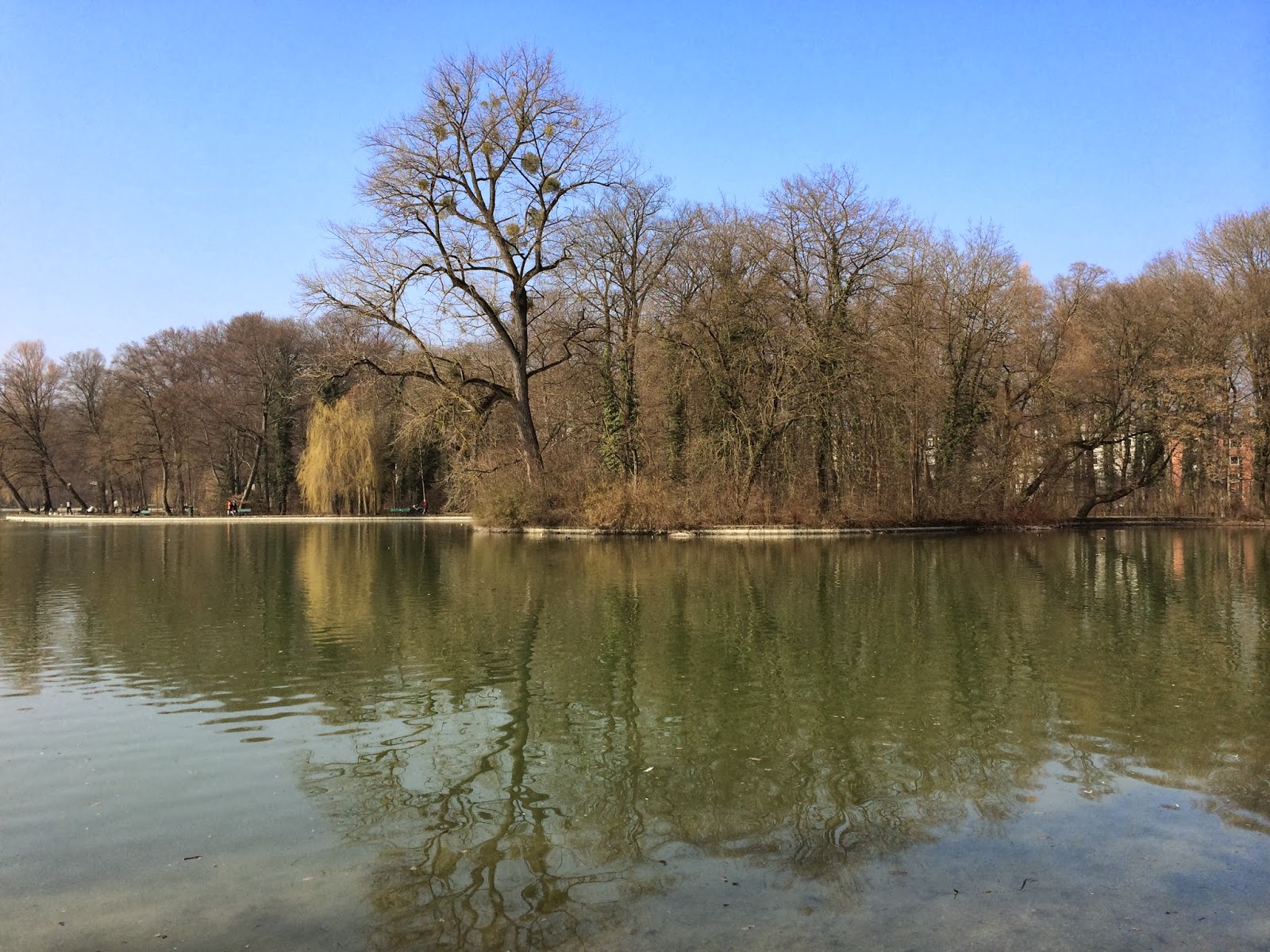 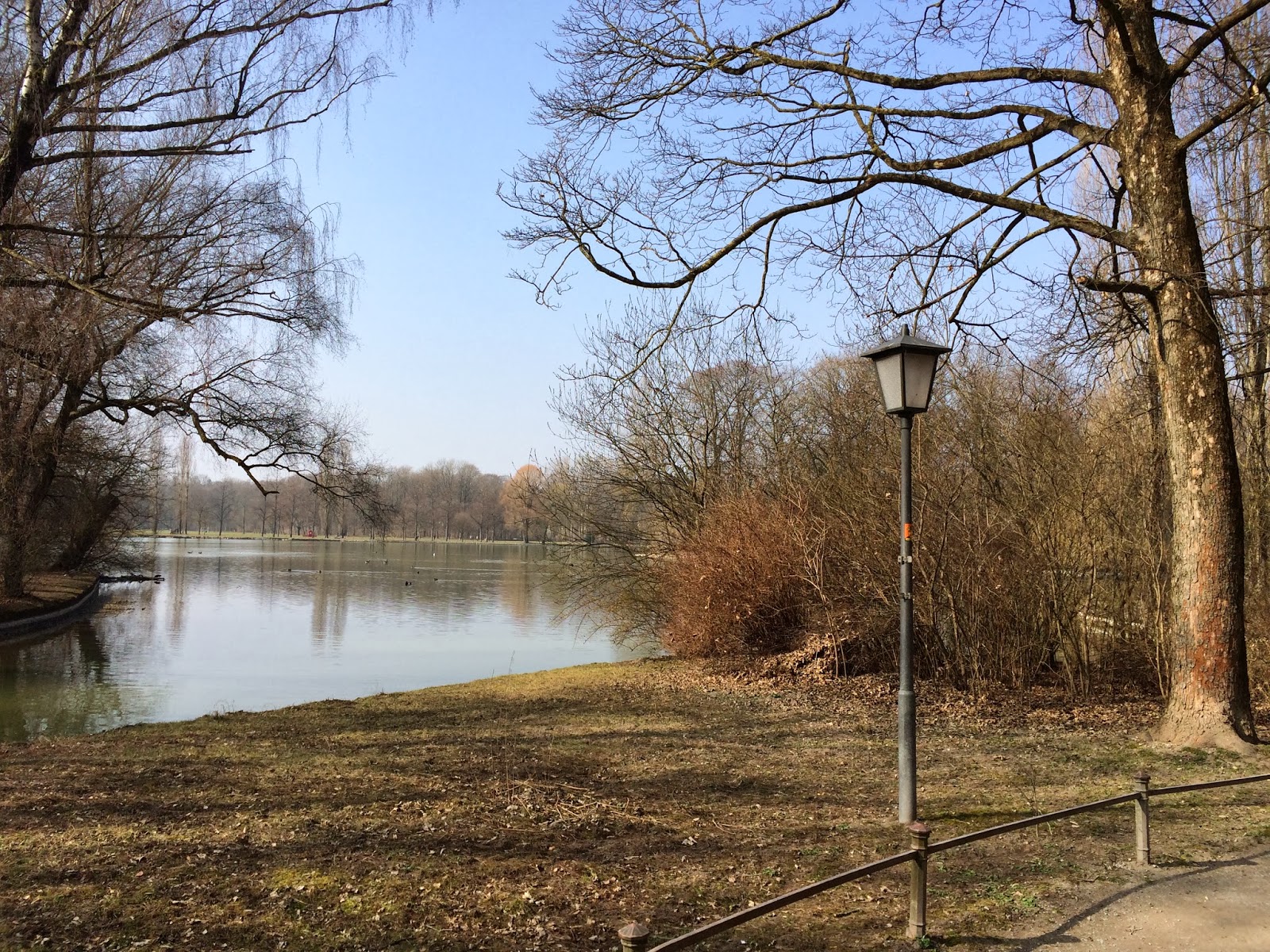 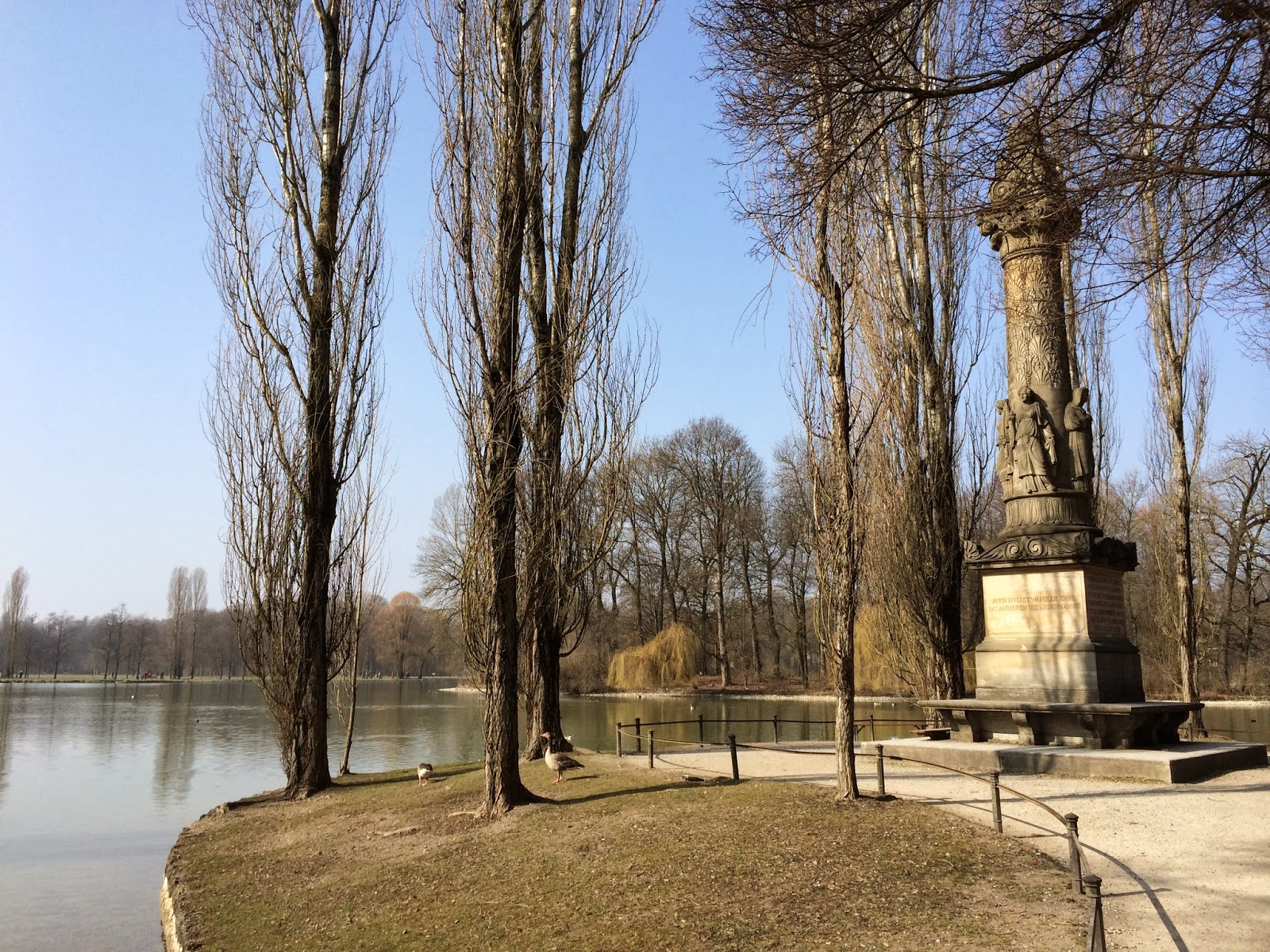 Here I admired the beautiful scenery and mirror-like water, before investigating the few food stalls around.

However, I decided to go to the Seehaus – ‘The’ Beer Garden of The English Gardens.

There was loads of outdoor seating, even with fur covers due to the ‘freshness’ and people were relaxing in the sunshine. Whilst you can bring your own food picnics to the beer gardens in Munich, I happily perused the Seehaus menu.

Having never tried ‘white sausages’ before I went for "The Pearl of Munich", not knowing quite what to expect.

My coffee arrived, swiftly followed by a light beer, a jar of mustard and a pretzel! Then appeared a large bowl half-filled with warm water and a lemon, with two raw/anaemic-looking sausages floating in it...quite possibly the oddest presentation of sausages I have ever seen! 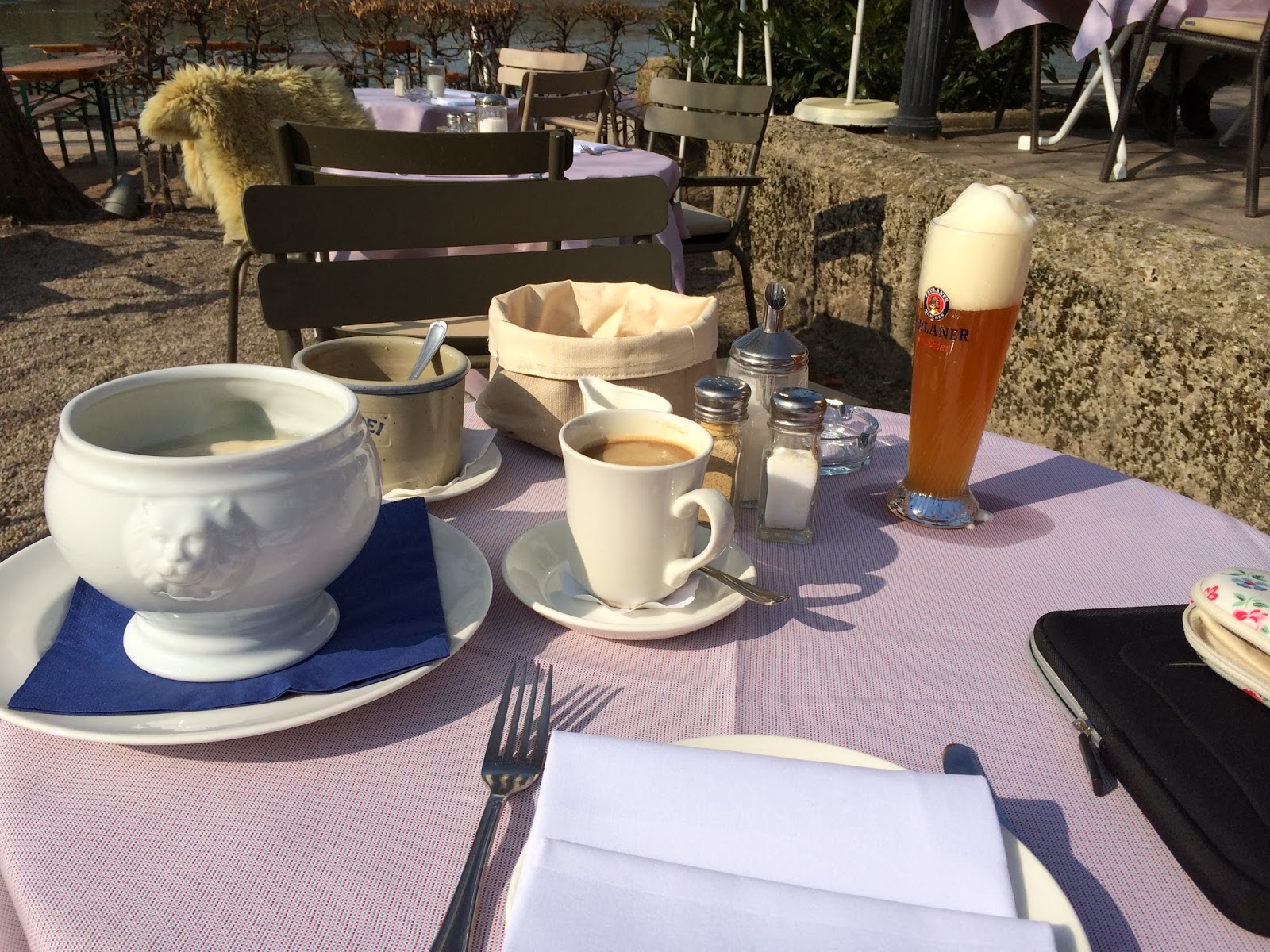 After fishing out a sausage (after successfully spearing it with my fork!) I peered a little closer at this strange looking meat stick...

My motto is always to ‘try everything once’ so I tucked in – and was surprised to find it tasted okay. The texture (particularly the skin) was a little odd but with a healthy dose of homemade mustard it was a perfectly acceptable brunch.

I’m already a big fan of the German pretzels (they’re becoming a food group for me here) and these were no exceptions...yum yum!

I was less sure about the beer, but I’ve never been a beer-drinker so I sipped a bit and then swapped swiftly back to my coffee.

After soaking up a bit more sunshine and atmosphere, I decided to get moving again – at least to attempt to burn off my brunch!

First I had a quick peek inside the Seehaus building...it was really nice inside, but unsurprisingly everyone was outdoors in the first sun of the year!

I cycled around the rest of the lake and then headed for the 'Chinesischer Turm' (Chinese pagoda tower). This was a lively area which was built in the 18th century and is now the heart of Munich's oldest beer garden.

There were people (plus dog, kids & bikes) everywhere, music played and a good fun feeling.

Next on my cycle tour was the small Greek temple 'Monopteros'...cycling past fields of people playing football and Frisbee I came across it.

I climbed to the top and admired the views over the gardens, with the tops of the city buildings peaking out over the top of the trees.

Loads of people were just sitting and looking out over the beautiful scenery and Munich skyline.

My final garden-stop was then the 'Japanisches Teehaus' (Japanese tea house, in case you couldn't figure that out), which was remarkably underwhelming – more of note was the mini waterfall next door!  This was built for the 1972 Olympics and apparently is worth a visit during an authentic tea ceremony.

Then, before heading home, I travelled up/down Leopoldstraße – the main street in Schwabing.  According to wikipedia...

"Schwabing is one of Munich's most bohemian districts and most expensive residential areas. The large number of shops, restaurants, and cafés along the district's main boulevards Leopoldstraße and Hohenzollernstraße cater mostly to those with money to burn. The hamlet of Schwabing was originally founded in the 8th century and therefore is much older than Munich itself, which was founded in the 12th century. It was incorporated in the city of Munich in 1890."

Lots of people were out in all the cafes that line the street, but the purpose of my visit was to check out ‘The Walking Man’ – quite literally a random large white statue of an alien-looking man on the pavement!

Essentially a perfect way to spend a sunny Saturday in Munich.