It takes two to tango!

Posted by The Hungry Traveller on 15:35 in Food South America Travel | Comments : 0

After a couple of hours sleep I got up to join some of the group for breakfast at a cute cafe on Florida.  They served medialunas (croissants) and cortado (coffee with a little milk).  There were gorgeous cakes and pastries everywhere. 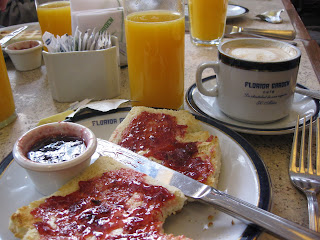 We went for a wander around the city, including Plaza de Mayo (a square which has been central to many of Argentina’s historical events and continues to remain a protest destination) and Puerto Madero, the renovated dockland area.

Then we caught a bus (more complicated than it sounds due to coinage requirements!), via the football stadium to La Boca.  A poorer part of town but an incredibly colourful Italian immigrant area with multi-coloured corrugated iron roughhouse buildings. 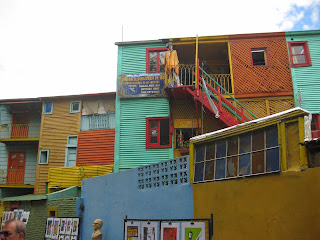 There was live tango taking place all around and lots of artists.

I treated myself to a coffee and alfajor (chocolate-covered cookies sandwiched with dulce de leche) at Havana coffee shop, after a friend’s recommendation.

Then some of us went on a22km  bike tour around the north of the city for the rest of the afternoon. 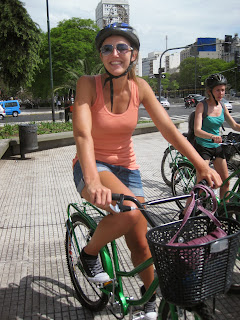 I managed to get stuck halfway across the 16 lane street in oncoming traffic, much to the distress of our guide who’d only been doing the job 2 days!

After the bike tour we dashed back to get changed for our tango class and show.

During an Argentinean steak dinner we also learnt some basic tango moves which was highly entertaining.  Despite my two left feet I was still given a certificate...I wonder if the teacher confused me with someone else! 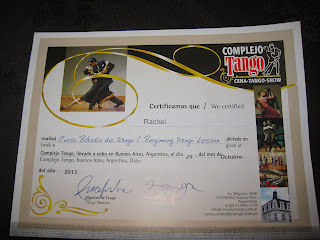 The show recounted the history of tango through five different scenes, with a highly entertaining section where some members of the audience were pulled up on stage!