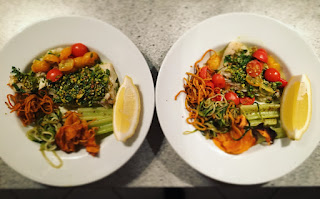 Continuing with my 2016 goal to cook (with) something new each month (so far in the first two months I’ve done broccoli couscous, quinoa ‘pastry’ tart, pak choi and pumpkin soup!)…this time we attempted a pimped-up fish’n’chips dish.

We started with the ‘chips’. And it was a task for the spiraliser…making spirals from sweet potato and zucchini plus crisp-shapes from another setting for another sweet potato. 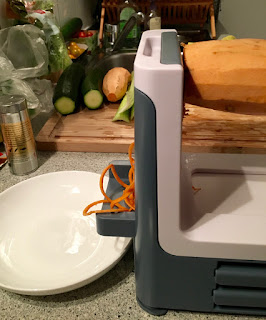 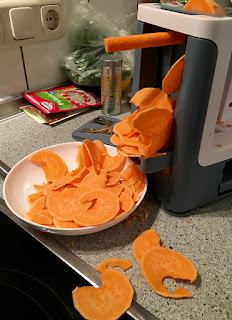 And just to add to the ‘chips’ we chopped up celery into ‘fries’. 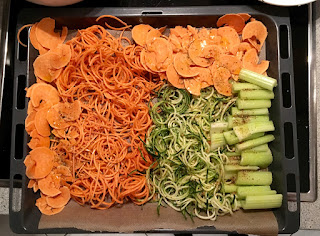 I was following a recipe I’d seen on BBC Good Food which was nice and simple - basically all I had to do was dress the chips with some olive oil and BBQ seasoning. 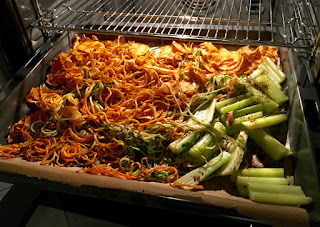 Whilst they cooked we prepped the fish. I’d spotted a tasty sounding recipe on skinnyms. for a pistachio crushed white fish which we adapted a little. It was easy enough - I’d bought two similar sized halibut fillets which were seasoned with salt and pepper, covered in ground up pistachio nuts (plus I added some chopped up fresh parsley) and then placed in a baking tray with some olive oil.

We then jazzed it up further with some yellow and red cherry tomatoes and added some white wine to the tray during cooking. 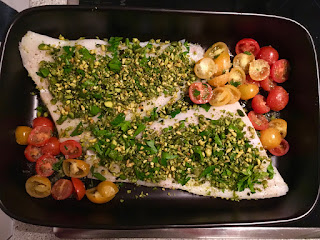 And it’s a simple as that…just bake and serve. 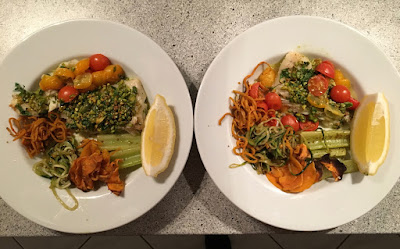 It was delicious - really tasty and flavoursome. However, we’d overloaded the fries tray and perhaps used a little too much oil so most of the veggies were more soggy than crispy but there were some exceptions. 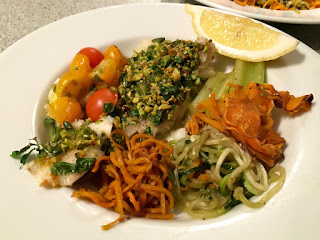 The pistachio herb crust was delicious and worked so well with the hint-of-wine fish and something I never would have thought to do.

Definitely recommend giving this a go.

We rounded off the meal with a (very yellow) tropical fruit salad - mango, golden kiwi, passion fruits and physalis. 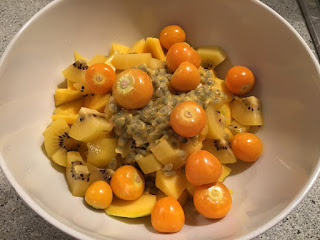 Visit skinnyms.com and bbcgoodfood.com for their recipes.