There are some countries I travel to that I just feel an instant connection with – South Africa is one of them. I can’t put my finger on why exactly but it’s a great combination of lovely people, delicious food, beautiful scenery, a rich history and fascinating culture.

Oh and lots and lots of meat!

I’m lucky enough to have visited the country a few times and so I’ve pulled together a few blog posts in appreciation of my highlights so far…this one is about Johannesburg but there’s still so much to see and do!

I have a friend in Jo-burg as well that I met whilst travelling last year – I love having friends all around the world! So when I’m in the area we meet up for a good catch-up over some delicious South African food…always a meat feast!

On my first trip to South Africa, my friend and her housemate cooked me a delicious braai. “Braai” is Afrikaans for grill or barbecue, coming from the word “braaivleis” which means roasted meat. But its more than just a meal – it’s a social experience that works for any occasion.
We snacked on local crisps – “simba” and “nik naks” as well as droëwors (dried sausage). 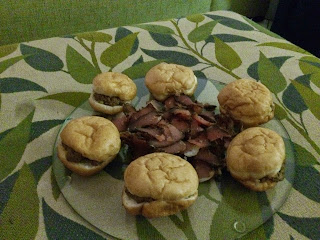 And of course some South African wine…which we had from a Turkey ‘goat’ jug! “Dop” is Afrikaans for “drink” and there’s never a shortage at a braai.

Then it was grill time…

We had sosaties (grilled marinated meat on a kebab skewer)… 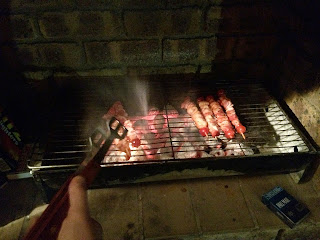 But you can have so many different meats at a braai – from boerewors (a spicey beef/pork sausage), mixed steaks and even seafood. 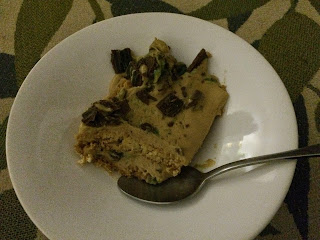 Such a delicious feast.

Good food is not hard to come by in South Africa in my experience but there is one place I’ve been back to a couple of times in Pretoria – ‘The Butcher’s Shop & Grill’ in Mandela Square. This meat haven offers up a delicious menu, featuring their signature steaks.

Whilst normally I don’t repeat meals, each time I’ve been back I order the same meal as it doesn’t disappoint! To start, I go with the game carpaccio

Pan-fried and served with sweet pepper or cranberry sauce.

And, of course, some gorgeous red wine.

This is a great place for burgers in Jo-burg!  Dukes is all about fresh ingredients from the best butches.  They make their own buns and patties and have a great (and entertaining menu!).

I had a British royal family inspired cocktail...

And then a delicious ostrich burger called 'Funky Chicken'.

After our feast we popped into a nearby bar for a drink and I was very entertained by some of the unique cocktails on offer...

This meze and wine bar is in the attractive Melrosh Arch shopping area in Jo-burg and offers a great selection of mediterranean/middle eastern foods.
And some tasty South African wine!

We didn't hold back, tucking into a feast of dishes, including artichoke hearts, crispy fried corguettes with grated gruyere, bifteki (aka "pljeskavica" - a spicey mince patty) and souvlaki chicken cubes.

With grilled Halva (a nut butter paste) with apples and cinnamon for dessert.

This mediterranean restaurant near The Butcher's Grill also serves some tasty mezes and meat.
We started with a platter of mezes to share...a great selection of meats, fish, cheese and veggies... 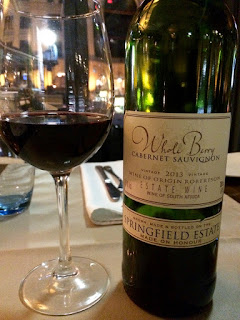 Before tucking into a prime beef steak which I had with creamed spinach and monkeygland sauce. 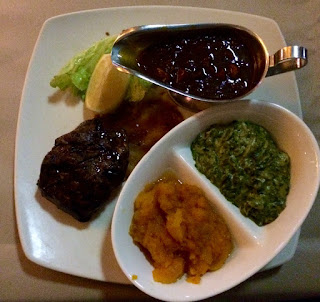 What on earth is monkeyglad sauce and does it actually involve anything to do with monkeys, I hear you say!?  It is basically a tangy south african sauce made from onion, garlic, ginger, chutney, soy sauce, mustard, ketchup and wine - typically served with meats.
‘Mosbolletjies’ aka King of the Rusks

This is a sweetened, leavened yeast bun which is lightly flavoured with aniseed and traditionally made with fermented grape juice. It is baked, broken into pieces and then dried. This food came about because Europeans struggled with bread in the South African climate and so by removing all the moisture, it kept much longer…think like a biscotti.
Snacks

Biltong is one of my must-have snacks.  I stock up whenever I'm in South Africa on this dried meat...grabbing a mixture of beef, game and ostrich.  I'd recommend finding your local South African butcher (there's loads in London) as this makes a great and healthy on-the-road snack, or a tasty addition to salads or eggs.

I stopped at a supermarket (Woolworths is still open in South Africa!) and stocked up on some tasty South African snacks…Beef frikkadels (the meatballs I’d had at the braai), Boerewors (spicey sausage) rolls, ostrich & game biltong and Soet Koekies.

Soet Koekies are old-fashioned sweet buttery biscuits with a hint of nutmeg and cinnamon. They are traditional Afrikaans biscuits but loved by all generations – especially with a cup of tea. Just like at home!  Except the South African tea is normally the taster (in my opinion), Rooibos tea.

Treats
One visit I managed a coffee'n'cake break, tucking into malva pudding. This sweet pudding originated in Cape Dutch and is kind of a sticky toffee pudding. It is sponge-based with syrup and apricot jam, served hot with a cream sauce or custrard on top.

The name apparently comes from Afrikaans 'malva' meaning 'marshmallow' due to the dessert's texture.

I also like to buy some of the chocolate bars that we don't get at home to keep me going on the long flight back...

Still on the 'to try' list
There are so many unique foods I still want to try in South Africa. Here's my 'to eat' list…one day!