Posted by The Hungry Traveller on 05:30 in Europe Family Food Travel | Comments : 0

Refreshed and revived after a good post-opera sleep, we tucked into the hotel buffet breakfast, before heading back into Verona city for the day.

We started at San Zeno Maggiore - a church notable for it’s architecture but also the story that it is where Romeo and Juliet got married.

It’s also next to a Benedictine abbey.

We carried along, admiring the street side cafes en route.

We found ourselves back at the river and walked along to the Ponte Scaligero bridge. 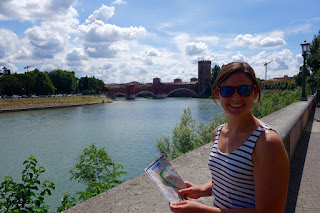 This time we crossed the bridge…

…checking out the scenery from the bridge.

We continued on, admiring shops and patisseries on the way. It was refreshing for me to have places open on a Sunday - it doesn’t happen in Verona’s twin town (and my current home town), Munich!

We ended up in Piazza Delle Erbe, near the Roman forum, where we decided to sit and soak up the atmosphere - with an authentic Italian coffee for company.

This ancient square was rebuilt by Lords of Verona using marble blocks and statues from Roman spas and villas.

I love coffee, but ever since I gave it up for Lent (again!) I’ve tried to stick to no more than one cup a day so I like to make the most of this treat time and have a good coffee.

Anselmi cafe didn’t disappoint. I had a cappuccino and my sister had a latte macchiato.

After chatting, people-watching and caffeinating ourselves we headed onwards - to Juliet’s house.

It was rammed. Every year hundreds of thousands of people head to Verona to see the balcony where Juliet stood while Romeo declared his love…despite them only being figments of Shakespeare’s imagination. 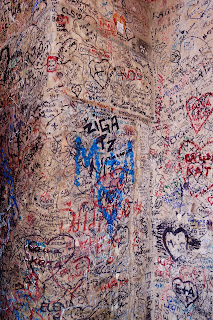 The balcony on the 13th century house over-looking the courtyard was actually only added in the 20th century.

You can go into the house to the small museum and then step out onto the balcony.

But there were so many people in such a small space we couldn’t wait to leave.

We stopped briefly to rub the bronze sculpture of Juliet for luck.

…and checking out the gift shop.

Before escaping to a calmer part of town!

Popping into foodie shops on our journey. 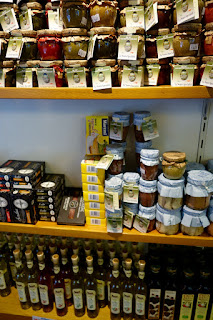 We continued wandering, before stopping for an early-afternoon treat of Italian biscuits:
biscotti, amaretti, lemon and raisin butter biscuits 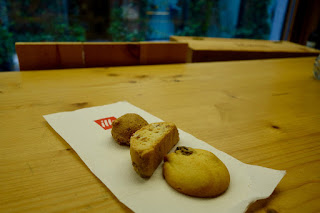 I love amaretti (almond macaroons) and these ones were delicious!

After savouring our sweet stop we headed onto Ponte di Pietra (“Stone Wall Bridge”) which also dates from Roman times.

Crossed the bridge we climbed up the steps to admire the view of the city from the castle (Castel San Pietro).

Bumping into (another!) bride on the way…there's definitely a theme here!

The views were stunning - I definitely recommend the short climb.

We also made a friend on the way!

Feeling like we’d done all the main ‘tourist’ things we decided it was time for another food stop…more yummy gelato! This time I chose ‘Juliet’s kisses’ flavour…which reminded me of Ferrero Rocher!

Then it was time to shop!!

My sister even got styled up by some very eager shop assistants...as I tried to sneak pics of her!

Laden down with shopping bags it was clearly time to sit down and join everyone else in their sunshine spritzer sessions.

We started with a drink in a street near to the main square.

I had a fruits of the forest spritz and my sister chose a passionfruit spritz.

With some olives and crisps to nibble on.

It was lovely to sit in the sunshine and indulge after a day running around the city.

When our stomaches started to rumbled we headed back to Piazza Bra for dinner, sitting facing the Arena once again.

My sister selected a delicious Valpolicella red wine to accompany our dinner.

We split a seafood salad…

Then she had a seafood spaghetti

and I had minestrone soup

We sat and chatted, enjoying the last part of our holiday as the sun went down.

...before grabbing a taxi back to the hotel (well we had all the shopping with us!) we had a last little nightcap, before lights out.

The next morning we climbed back into the car and headed back to Munich.  Stopping for a random lunch at a service station...