Posted by The Hungry Traveller on 05:30 in Europe Food Travel | Comments : 1

A friend and I decided to head to Prague in the Czech Republic for a long weekend. As foodies, our first stop was the highly-recommended Michelin-starred ‘La Degustation’ restaurant.


In their own words, they are an “upscale restaurant with a modern menu inspired by dishes from 19th century Czech cuisine”.

We walked from our hotel, past the dramatic Prague buildings on our way to La Degustation.

It’s a formal, yet nicely relaxed restaurant which you definitely need to book for - every table was taken when we went on a Friday evening.

You can choose between a six or eleven course selection, plus drinks pairings.

The menu changes each month to ensure only seasonal products are used.

I’m glad we picked the six course menu though as a number of foods appeared on our table that weren’t on the list!

Mixed appetisers, including a tomato foam and olive cracker.

And a beef tartare ‘sandwich’

O and some bread with whipped butter…

We could see all the kitchen activity from our table and eagerly checked out the food making its way around us.

Our first (official) course was “trout, egg, dill, buttermilk” - it was delicious! 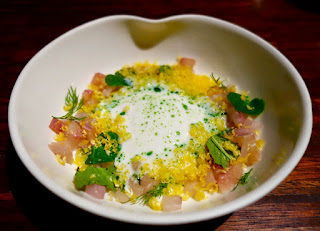 They added the ‘soup’ to it in front of us. It was really delicate and full of flavour.

And already the wine glasses were piling up!

Another light but tasty course. And again beautifully displayed.

We were delighted that we finally had red wine - as we’re much keener on red, but followed the waiter’s advice before.

And then some smoked apple appeared!

Then perhaps the wine went to our head, or all the blood left our heads for our stomaches, because we started a napkin creation challenge!

Before another random course arrived of green tea foam, candied carrot and a marshmallow. 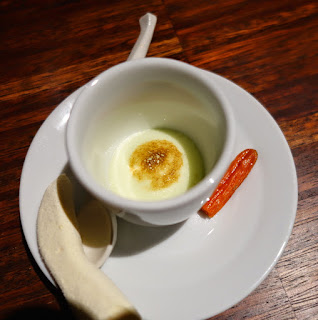 To accompany our peppermint tea!

If you like fine food and aren't after of a few random ingredients, I’d encourage you to visit La Degustation. It was definitely a great experience for us!