The ‘thing’ to do in San Ignacio is ‘caving’. The one that everyone does is ‘ATM’ (Actun Tunichil Muknal) but due to the torrential rain, this cave was closed. So the roomie and I opted to do the more tough and adventurous alternative: Crystal Cave. According to the caving company not everyone can do this cave – it requires a good level of fitness and is a real challenge…o boy! 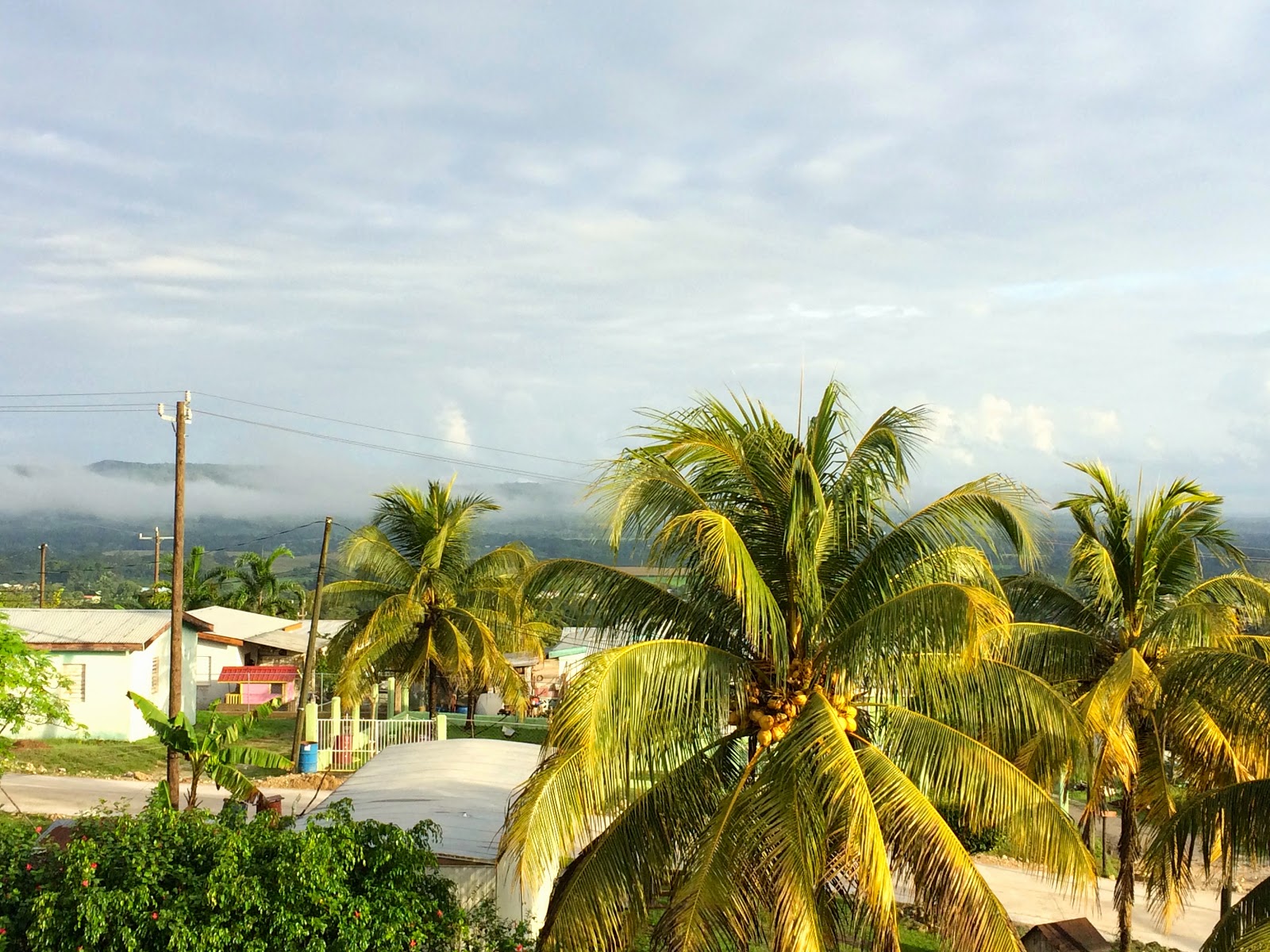 To power me up for the demanding day ahead I had a cooked breakfast: scrambled eggs with longaniza (a Spanish sausage similar to chorizo) and fry jacks (a Belizean traditional dish – deep fried dough pieces!)

Our bus arrived at 7.30am and we headed off towards the Blue Hole National Park, about 1.5 hours away.


Here we got loaded up with helmets set off for a 1.5hours upward hike through the tropical jungle…

…in the pouring rain!

This made the climb over slippery clay, mud and limestone rocks even harder and my body-slam into the floor wasn’t a surprise!

Finally we reached the entrance to the cave.

Here we added head-torches to our attractive ensemble, before clambering down a steep edge (with a rope) to step inside the cave. 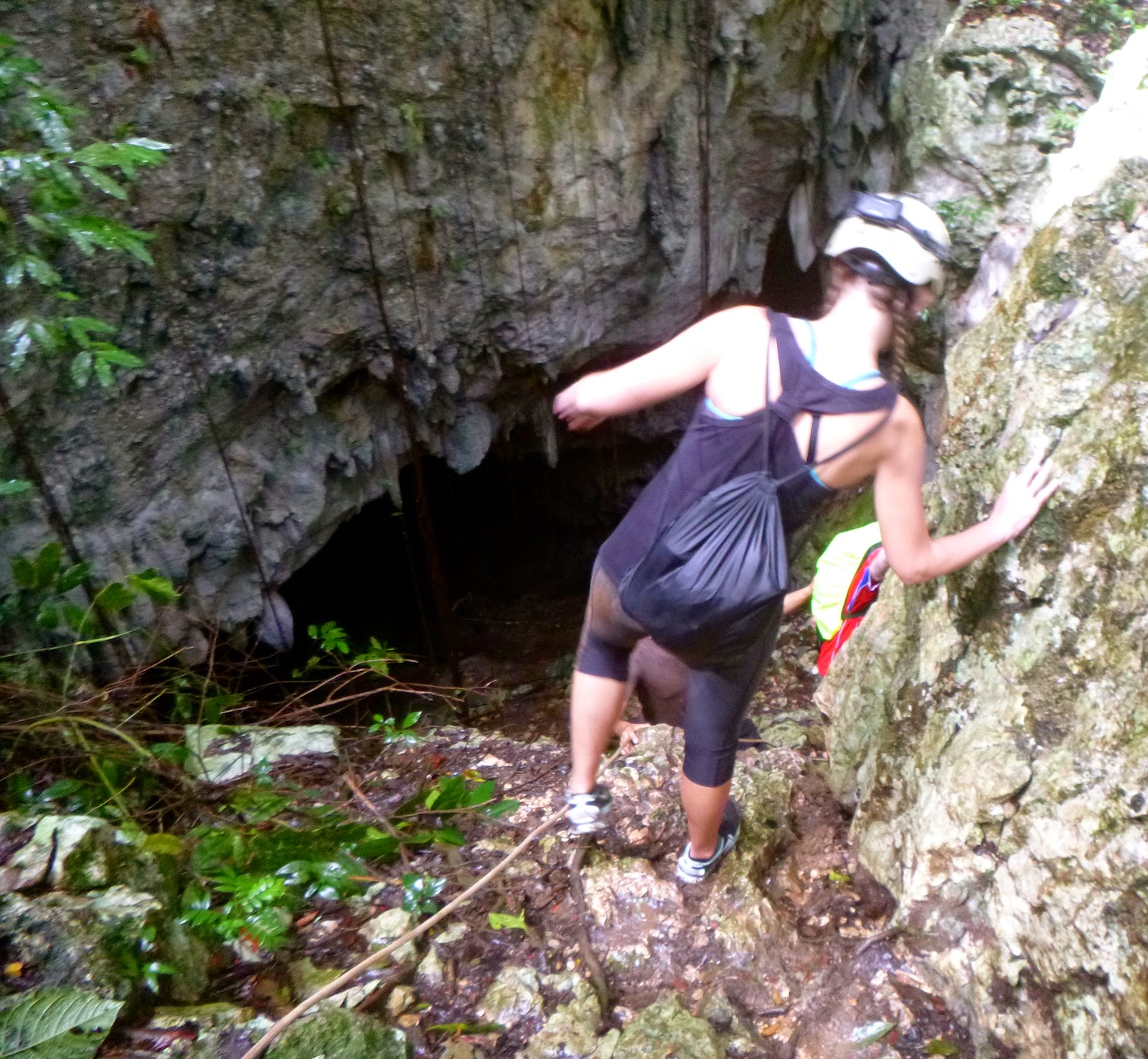 Crystal Cave is one of the largest cave systems in Belize – it has huge caverns full with beautiful stalactites and stalagmites, flow stones, rock columns and crystalline formations. It is also the entrance to one of the more mystical and scared Mayan areas.


Once in the first part of the cave we had lunch before venturing deeper…the best tortillas since we’d arrived in Central America!

We split into small groups of five and our guides took us off exploring. There are a number of different routes that you can take to get deeper into the cave…ours took us through various small passages where we had to ‘crab walk’ or slide and crawl through tight spaces – fortunately he kept the mood light and humorous so no ‘claustrophobia’ kicked in.

Crystal Cave also has some ancient Mayan artifacts – including skulls, jewelry and pottery – that you are shown as they teach you the cultural beliefs and ceremonial rituals of the Mayans.

These caves are meant to lead to ‘Xibalba’ – the Mayan underworld.

We got more and more filthy as we progressed through – half the time was spent sitting on damp clay to maintain a ‘three points of contact’ with the slimy surface!

The lowest point we reached was approximately two miles underground – and the further we went, the slimier the clay covering the rocks got, the colder the air felt and the tougher the terrain. You push yourself through small crawl spaces and then reach a large cavern…and repeat!

After about three hours grasping at small rock holds, swinging around edges, sliding down and over slippery rocks, squeezing through tiny gaps we stopped and were offered the opportunity to continue on for another two hours onto ‘Wonderland’. At this point half of the group – myself included, decided that we were exhausted and that fresh air would be much appreciated.

So we headed back up to daylight - after a little pause of lying on the rocks with our head torches turned off listening to horror stories!

It was great to arrive back at the top – the rain had stopped and we were ravenous! We snacked on leftovers from lunch before doing the 90 minute jungle hike back to the van. The rain had thoroughly soaked all the clay and mud and the walk back was very treacherous…I fell so many times, adding to my bruises and dirtiness!

We were delighted to ‘wash’ in the small water tanks at the site before heading back delighted and worn out back to the hotel.


I can’t remember ever being so delighted to get into a shower!

We finished scrubbing the clay and mud from us in time for dinner, where I had a tasty ‘tequila-spiced prawns’ dish…

…before we indulged in ‘tres leche’ cake and ice-cream – we’d definitely earned it after our full day of active endurance.

We collapsed in our room, drinking piña coladas and trying to dry our trainers and clothes with hairdryers!