Posted by The Hungry Traveller on 20:52 in Europe Food Germany | Comments : 0

I love food. No question! However, I’m not much of a cook. I love to be in the kitchen, but my usual role is wine-pouring and chatting, peppered with occasional stirring and chopping responsibilities.

However on Friday night a couple of us got together with a local friend who is really good at cooking for her to teach us some Bavarian delicacies and impart some kitchen wisdom.

We came armed with aprons and alcohol – key kitchen tools!

We were using recipes from one of Germany’s top chefs, Alfons Schuhbeck.

While Steffi prepared the beetroots, I was in charge of the marinade.

It was a warm dressing of vegetable stock, red wine vinegar, balsamic vinegar, olive oil and seasoning.
I might have made a little too much as the beetroot pieces were shortly swimming in my soup-y sauce.

Next up was the main course: Tafelspitz mit zweierlei Dips und Kohlrabi.

I’d never heard of ‘Tafelspitz’ before – it’s a German word literally meaning ‘tip of meat for the table’ and is boiled beef. The cut of meat is called ‘topside’ in England and ‘Top Round’ in USA, the part of the cow near the tail. This dish is considered the national dish of Austria, but also very popular in Bavaria, Germany.

This meat simmered in a broth with root veggies and spices for hours. 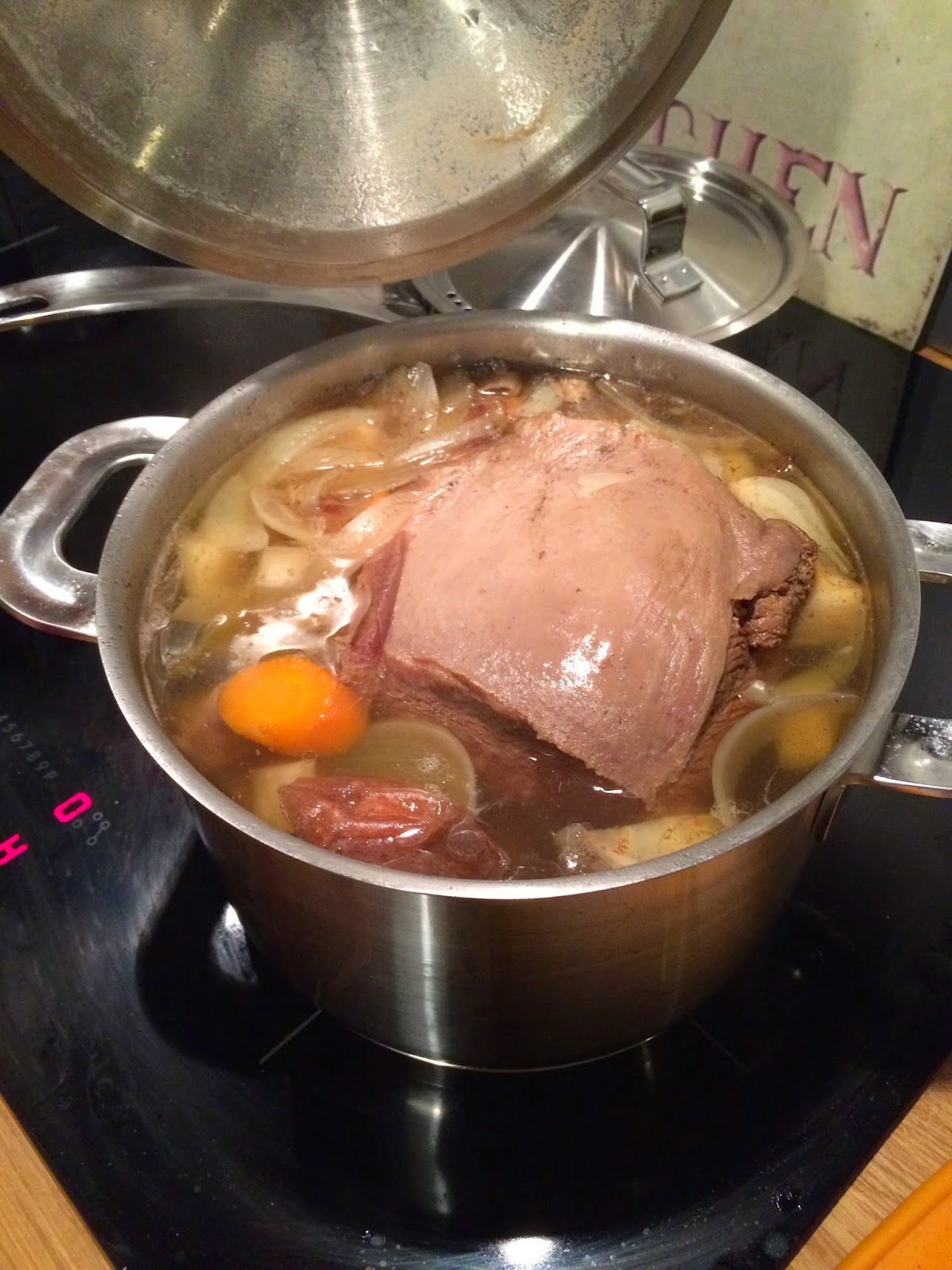 To accompany the meat we prepared horseradish (‘western wasabi’)… 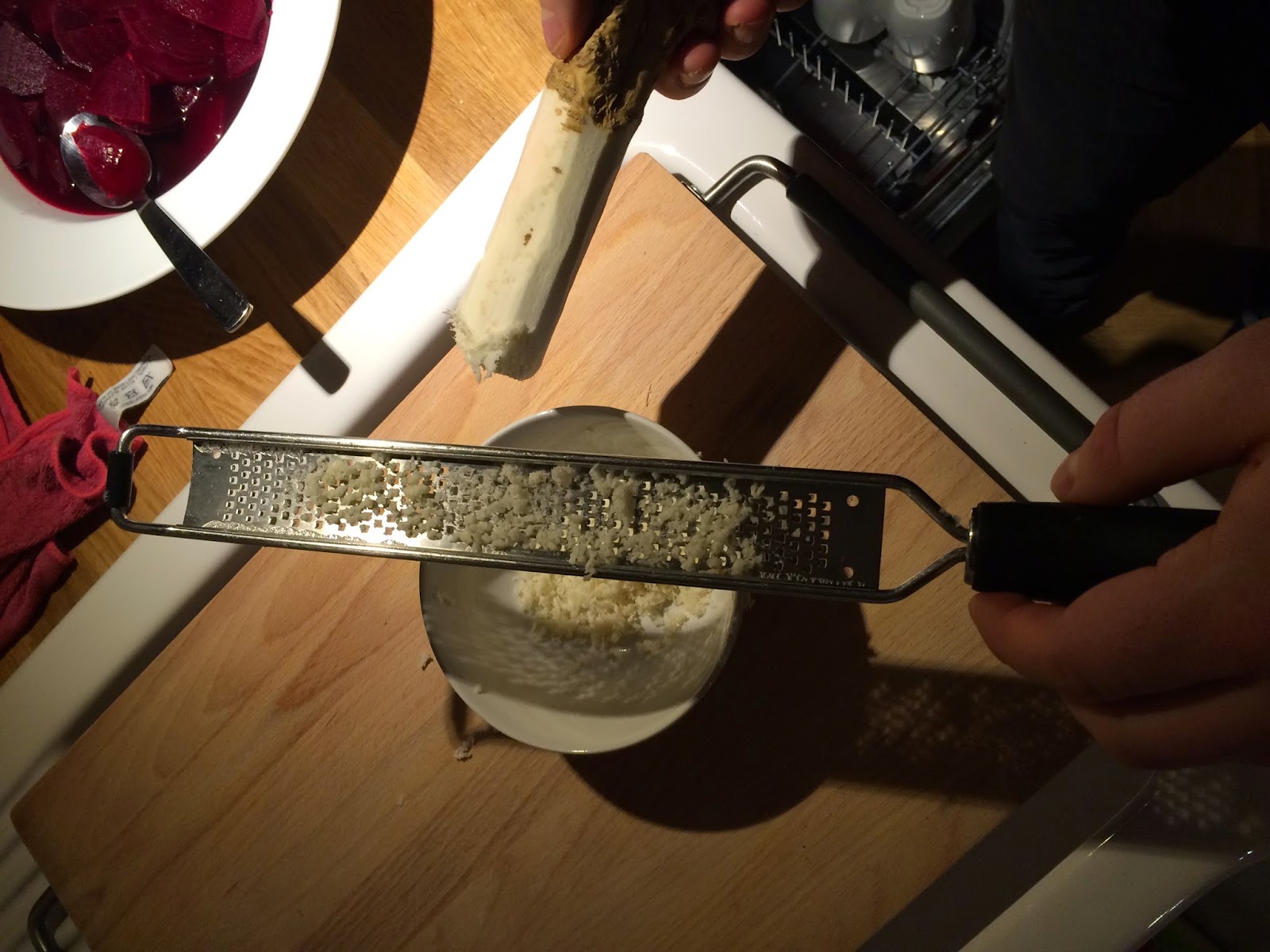 …and kohlrabi (German turnip / turnip cabbage). I’d never seen this popular German veggie before – it turns out you can eat it both raw and cooked (as long as you peel it first!).

It tastes similar to broccoli stems.

We cooked ours – adding more flavor with nutmeg, parsley and vegetable stock. 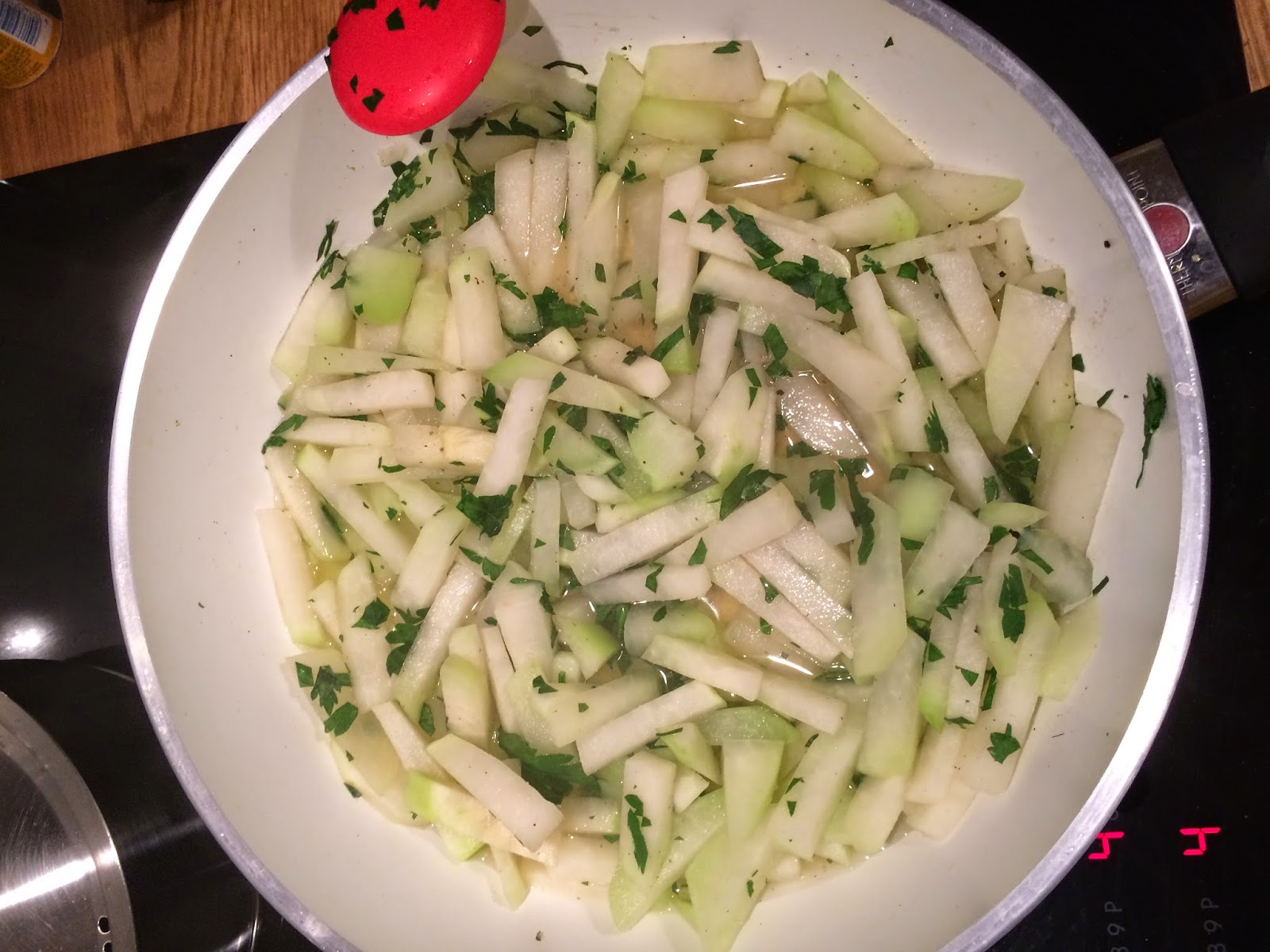 Then it was time to carve the tender meat - best left to the experts! 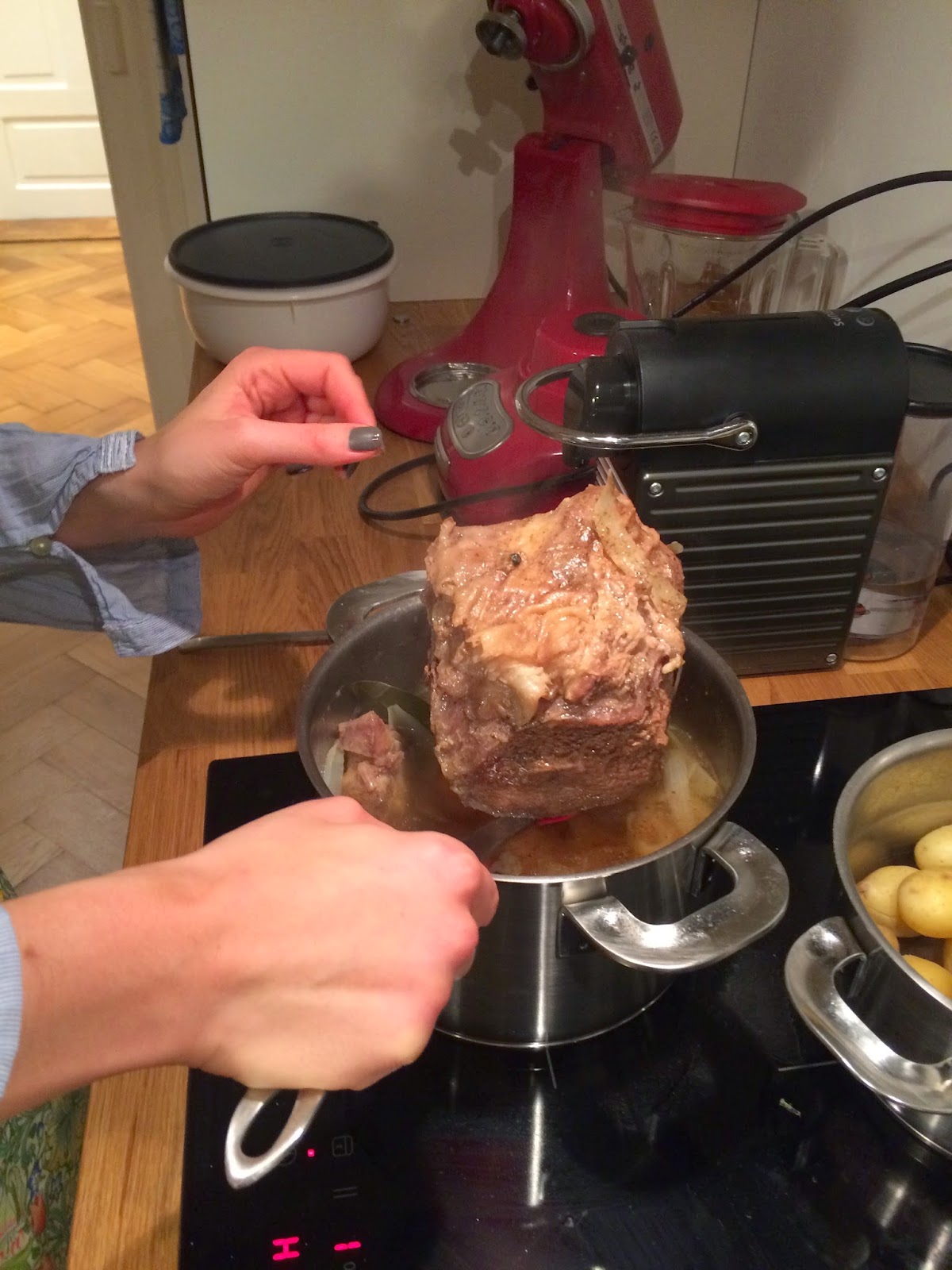 It was all delicious...if we might say so ourselves!

The final element to our three-course Bavarian feast was Buchteln mit Vanillesauce. We actually prepared the yeast dough for these sweet rolls before main course to allow it time to rise.

We were excited to play with the fancy mixer!

Once the dough (nicknamed ‘Herman’) had risen, and we’d eaten our first courses, we headed back into the kitchen to prep dessert. 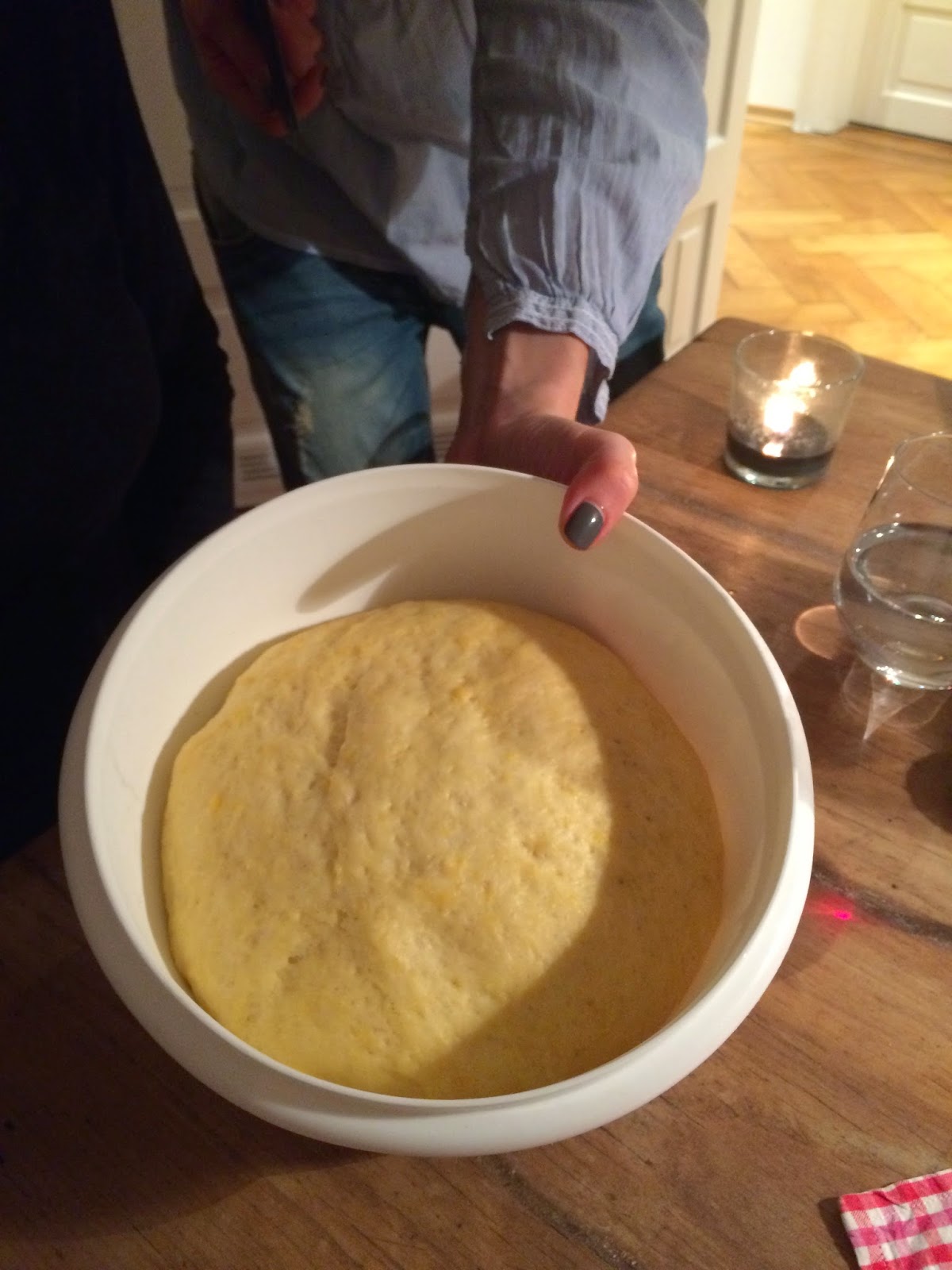 We took small handfuls of the dough and made a ball-shape, squeezing a cube of nutella-style paste into the middle. 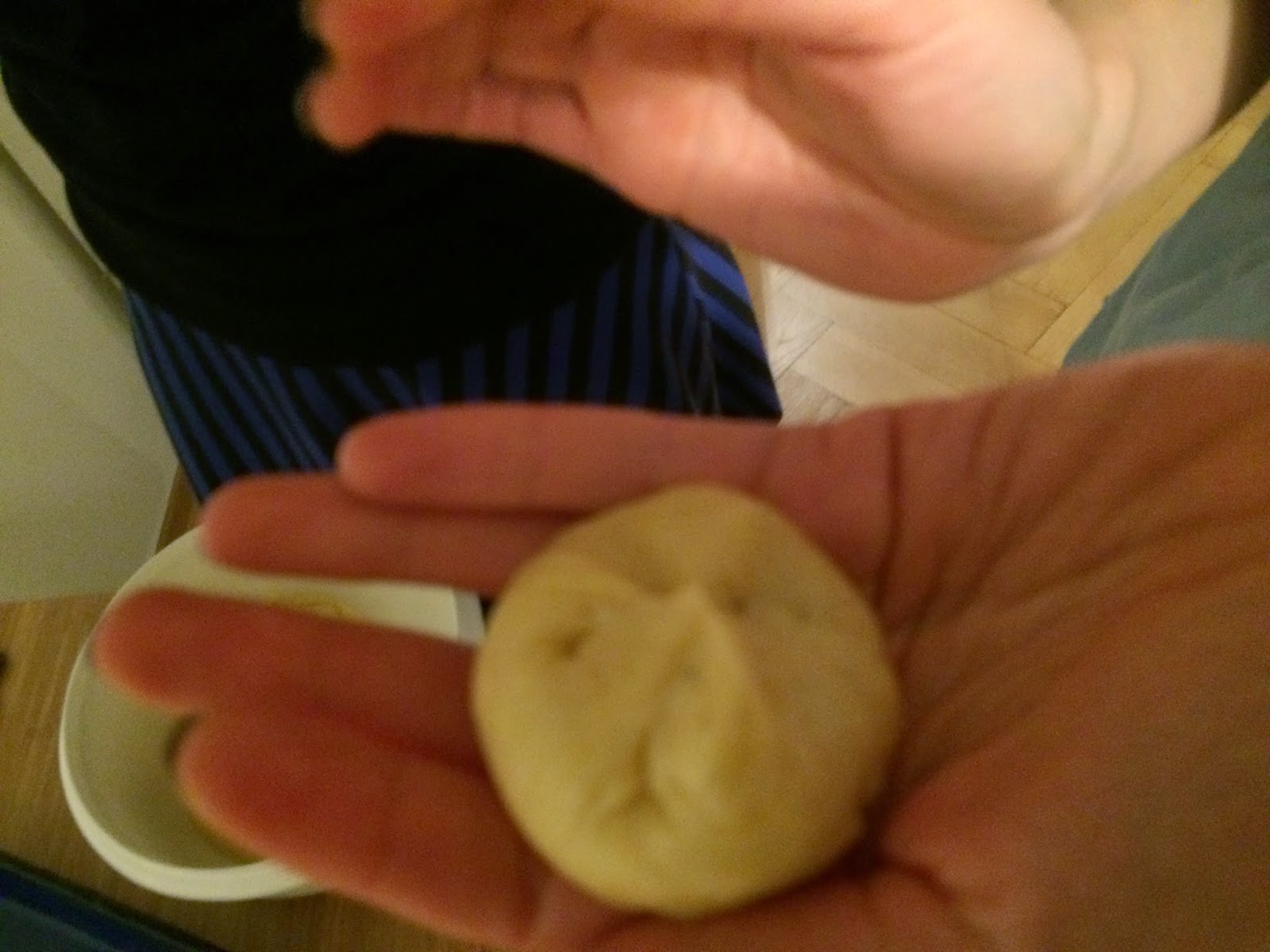 We lined up the dough balls in a large pan before baking. Close enough so that they would stick together.

A little egg-wash before baking...

The traditional Buchtel is filled with plum jam and topped with vanilla sauce or powdered (icing) sugar.

We made a vanilla sauce (like a thin sweet custard) to accompany ours.

Hot out the oven we dished up dessert…

...as always, I like to make my food fun, usually with a face, tonight was no exception!

They were delicious – the hazelnut / chocolate addition was lightly melted and we happily soaked up the vanilla sauce with the doughballs. 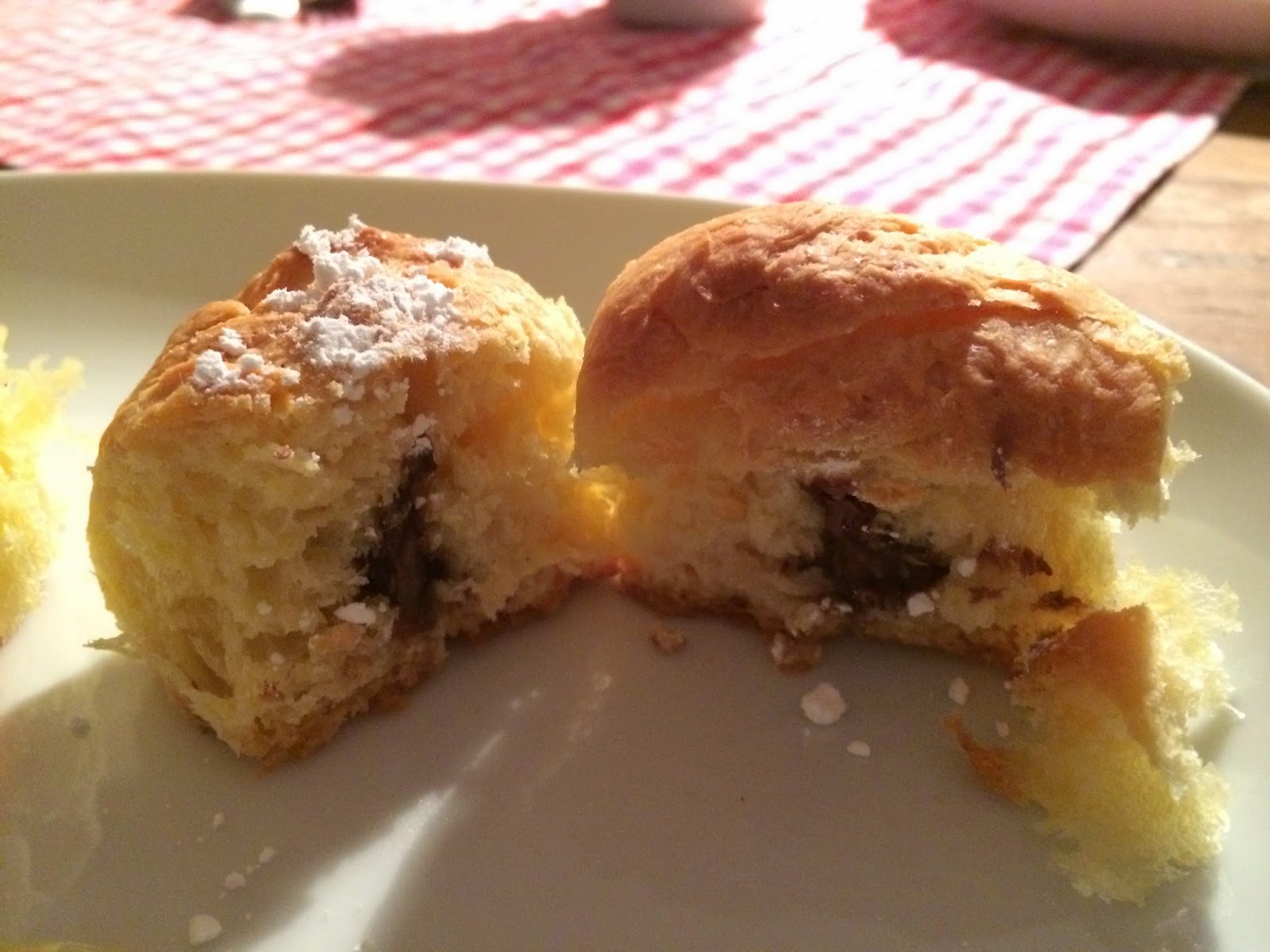 To finish off our evening we tucked into a South Africa spirit – Amarula, I’d picked up on my recent visit to the country. It’s a cream liqueur made from sugar, cream and the fruit of the Elephant tree (African marula tree), similar to Baileys. 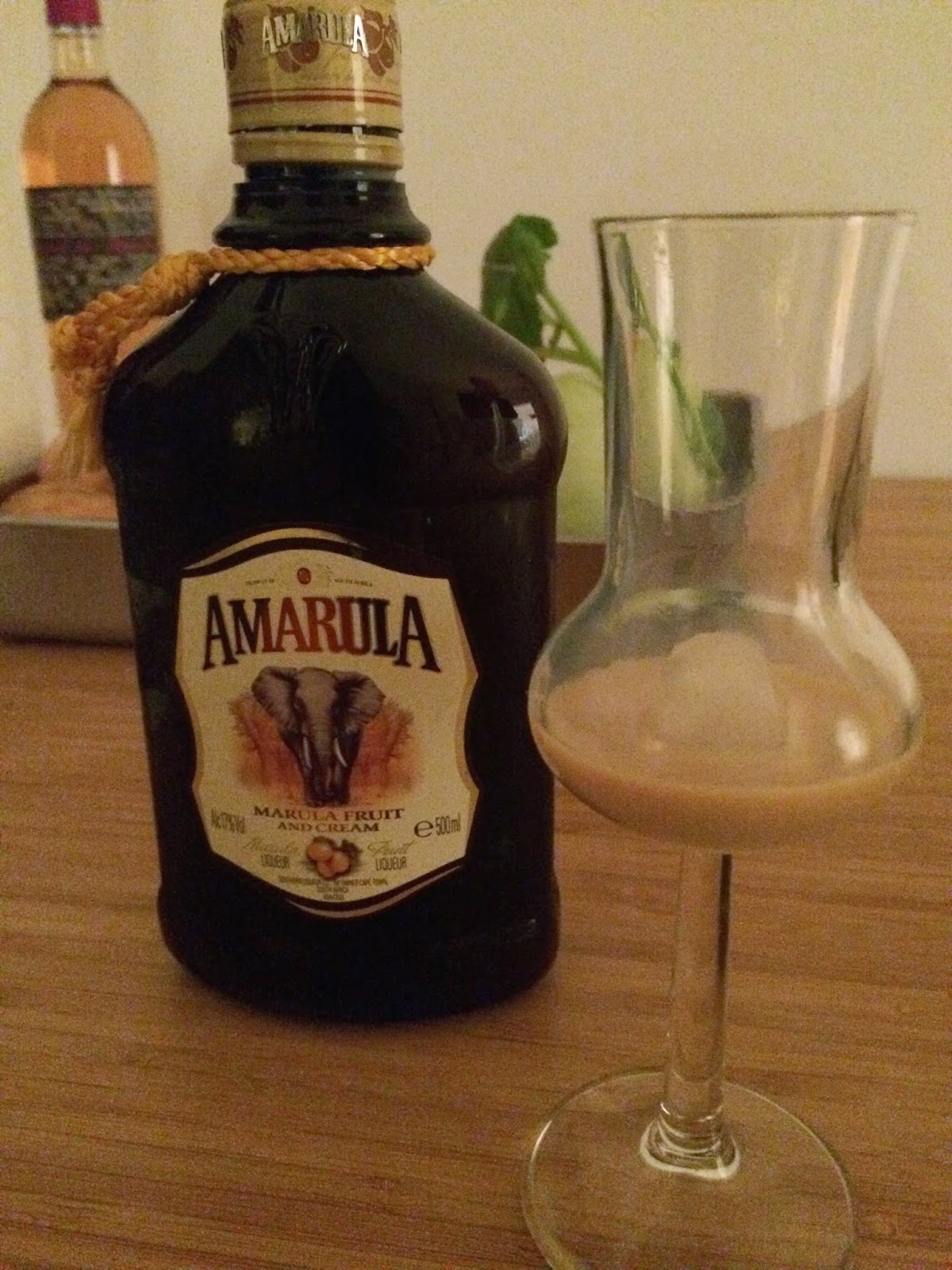 An excellent way to spend a Friday night!

I even got a goody bag of yummy rolls to take home...they made a tasty breakfast!

Her boyfriend got the leftovers the next day...yum!

Though I think at some point I may have agreed to host a British cooking evening at mine…goodness knows how I’m expected to teach people. I’m thinking Afternoon Tea might be a safe(r!) bet…