I came, I saw, I conquered

Posted by The Hungry Traveller on 17:52 in Asia Food Travel | Comments : 0

It was time to leave the surreal landscape of Cappadocia and head onto Konya. 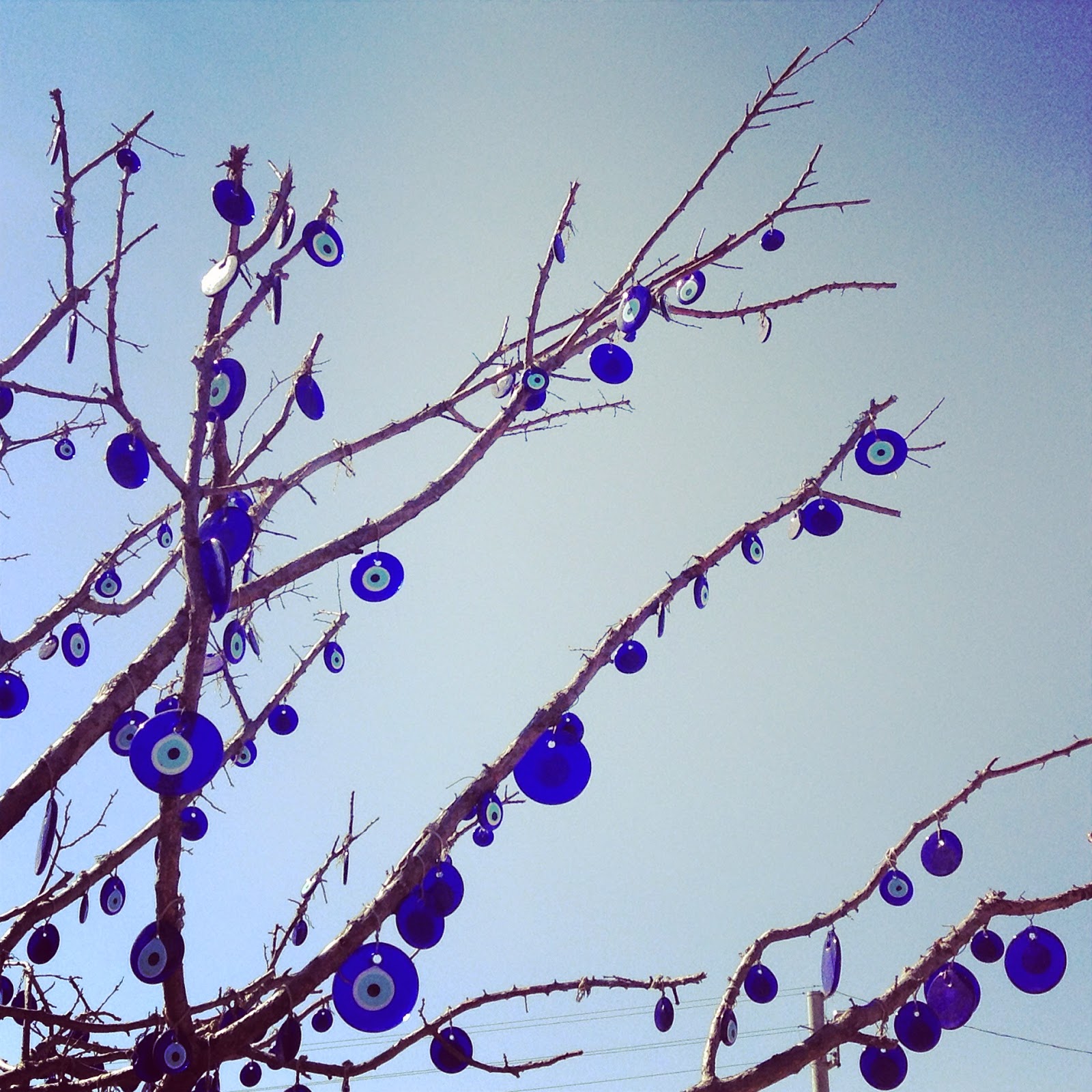 Our first stop on the way through central Anatolia’s hazy plains was Derinkuyu Underground City. This multi-layer city extends to approx 60m below ground and was first built in 8 BC. It is Turkey’s largest excavated underground city, capable of holding approx 20,000 people plus animals and supplies. 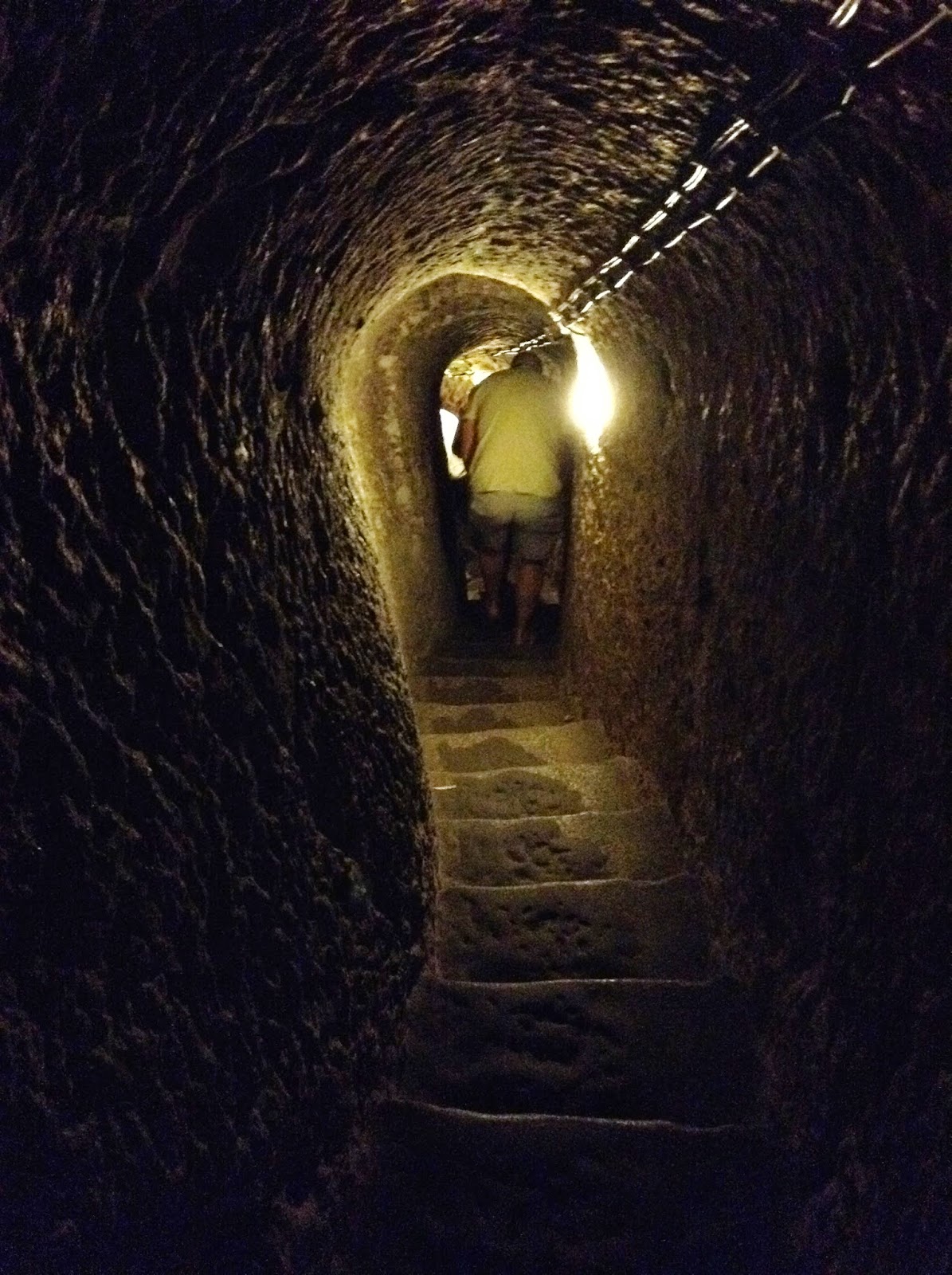 The city had heavy stone doors meaning that it could be ‘closed’ to the outside world. Cities like this were used as hiding places in troubled times (for example, Christians escaping persecution from the Roman Empire) and the unique geology of the area means that Derinkuyu (and neighbouring Kaymakli) are excellent examples of underground dwelling.

Visitors have access to about half of the tunnel and room network, letting you see the variety of rooms creating – including chapels, storage rooms, stables, schools and wine presses.

We made our way through the maze of small tunnels connecting the different rooms and working our way down to the 12th level. Fortunately I didn’t feel too claustrophobic (which I had been worried about!) as the place was relatively quiet and the underground rooms were large.
After a little leg stretch, we climbed back into the bus to continue our journey towards our village homestay.
Central Anatolia is a place rich in history - it's not only the place where Atatürk started his revolution, but also the land of whirling dervishes, where Alexander the Great cut the Gordian knot (now a metaphor for solving an impossible problem by cheating or 'thinking outside the box'), where King Midas apparently turned everything to gold and where Julius Caesar said his infamous line "veni, vidi, vici" (I came, I saw, I conquered).

After another little journey we arrived at a caravanserai. These are found frequently along the 'Silk Road' and other trade roads through Asia, North Africa and Southeastern Europe. They are essentially a roadside inn where merchants and their animals could rest along their journey, as well as network with many other international travellers. 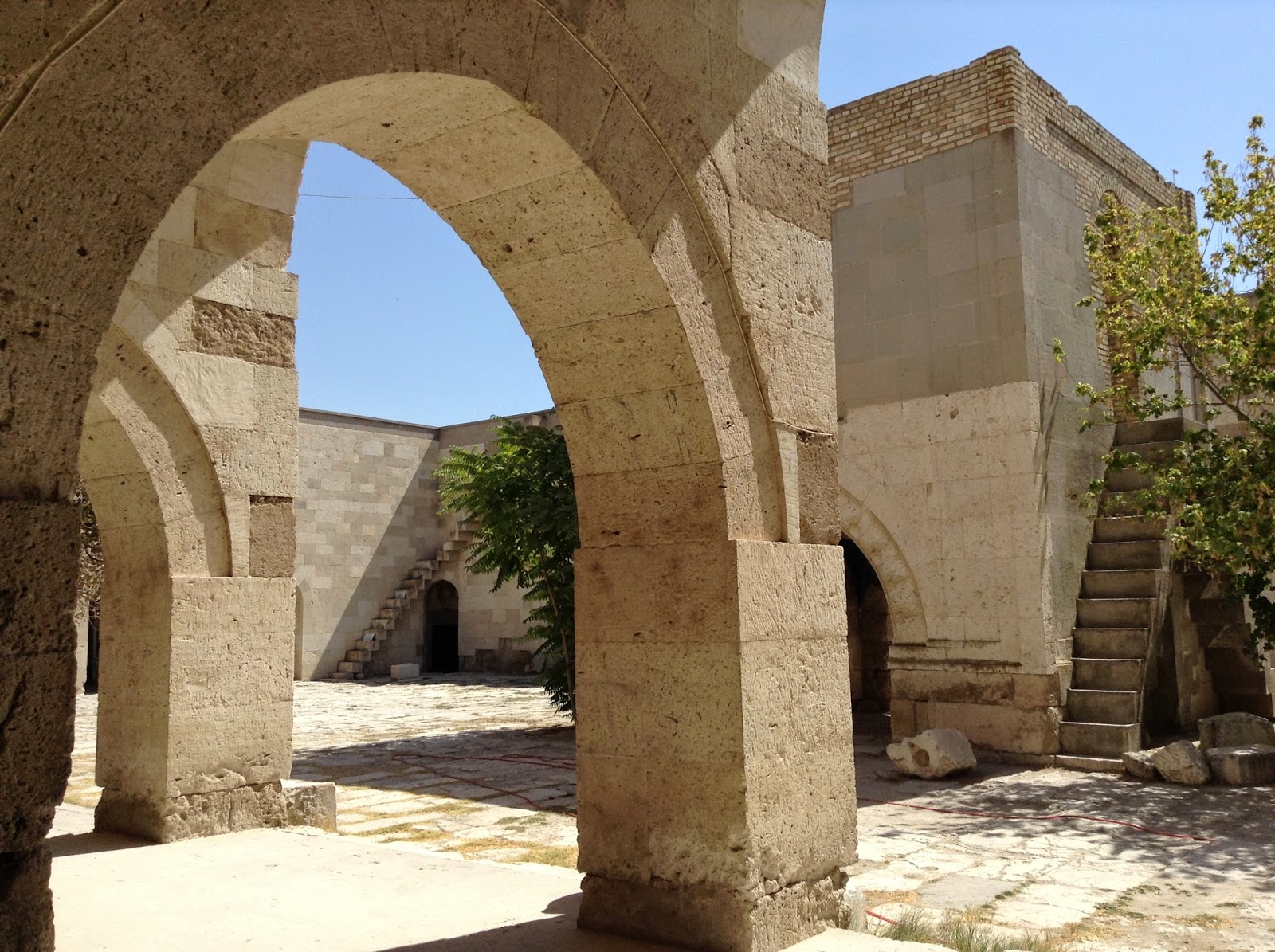 After a wander around I decided to do some shopping - I'd forgotten to pack my harem pants for the trip so bought a new pair...check out the style!

We jumped back in the bus but as our stomachs started rumbling we pulled into a stop for feeding. This time we went for the regional varient of pide...a very very long stretched version!

Continuing on our journey towards Konya we arrived at Rumi's tomb, a 13th century mausoleum, incuding a mosque, dance hall, dervish living areas, school and tombs. Rumi (his full name is Jalāl ad-Dīn Muhammad Balkhī) was an Islamic philosopher, poet and Sufi mystic from Persia. His peaceful teachings focused on "unlimited tolerance, positive reasoning, goodness, charity and awareness through love." (thanks, wikipedia)

Whilst I'd never actually heard of him until this point, he is considered very important - particularly by Iranians, Turks, Afghans and other central Asian muslims.

He died in 1273 in Konya and his body is in the Green Tomb inside the Mevlana museum's mosque.

The site was packed - it is continuously flooded with faithful pilgrims coming to pay homage but in particular on Fridays (today - the most important day of the week in the Islamic faith).
After his death, his son (Sultan Valad) founded the Mevlevi Order (aka the Whirling Dervishes) where the sacred Sufi practice of religious meditative turning (whirling) to music has continued.

Before heading onto our village (Guneysinir) we bought some presents for the family - I picked dates!

But there was time for just one more stop...

This time it was Çatalhöyük - the largest and best-preserved Neolithic site ever found.

This settlement was lived in approx 7500 - 5700 BC and was first excavated in 1958. We visited two of the mounds that this ancient dwelling was hidden beneath.

The site contains only domestic buildings for up to 10,000 people. Interestingly there were no footpaths or streets, but all the mud-brick houses were built together with the rooms accessed through a hole in the ceiling.

The site was closing so we headed onto our village.

The family we were staying with were lovely - mother, father, sister-in-law and son who were all very welcoming.

The father (Umit) took us for a walk through Guneysinir village where we waved at the children and other residents as the sunset.

Heading back to their home we helped with setting up for our dinner...

A feast of delicious foods which we ate outside on the porch (with a communal napkin / under-tablecloth!)

As the evening went on we relaxed, listening to the final call to prayer and played cards before crawling onto our mattresses to sleep.