On the road to Albania's capital city.

Posted by The Hungry Traveller on 20:23 in Europe Food Travel | Comments : 2

Today we left the gorgeous Kotor to head onwards to Albania... 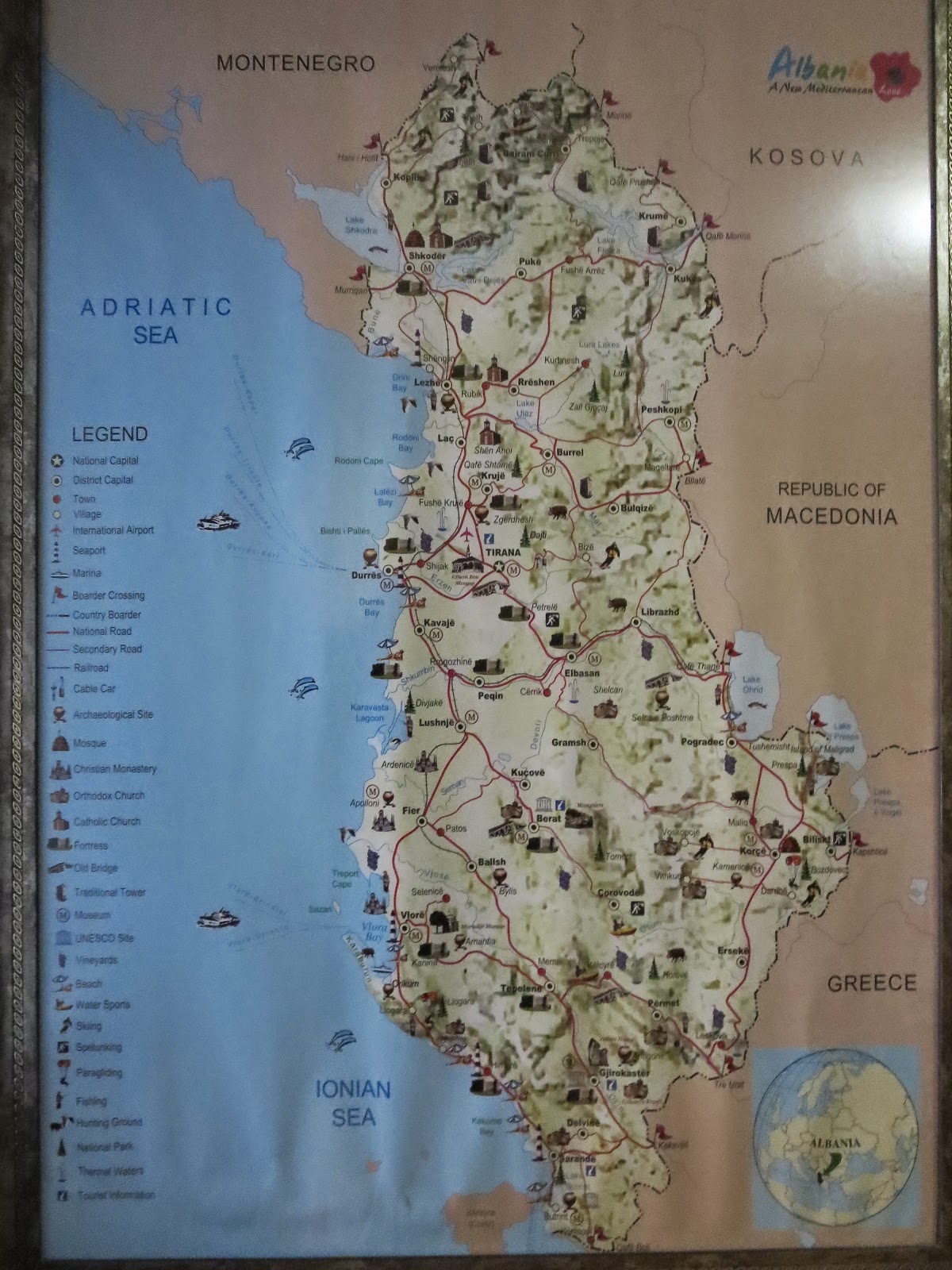 With our most recent Albanian experience being a slightly strange, but very friendly waitress in Vienna, we weren't quite sure what to expect...

We set off early, saying goodbye to our hostel room view with Turkish coffee with the hostel employees, before leading the old town. 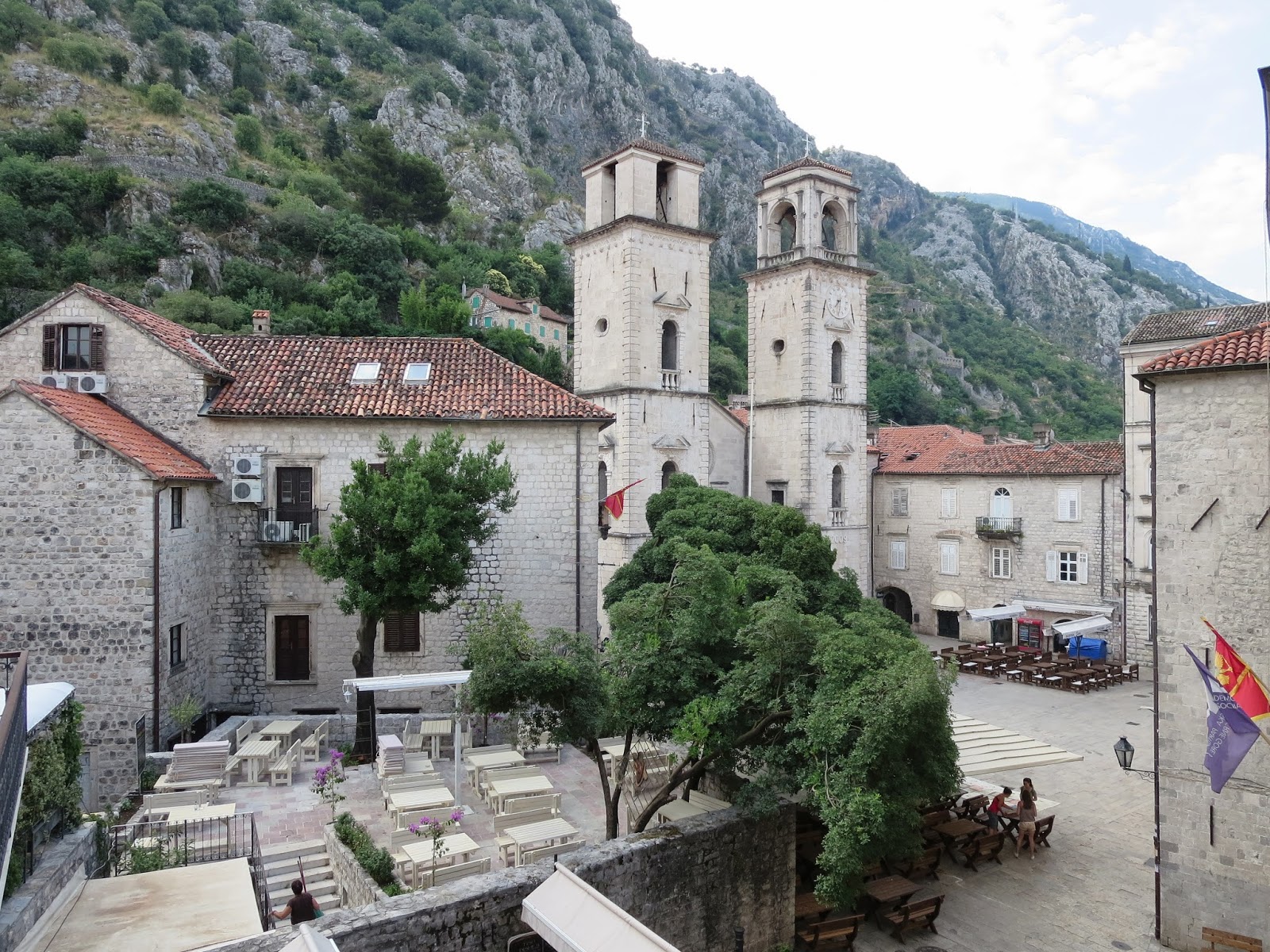 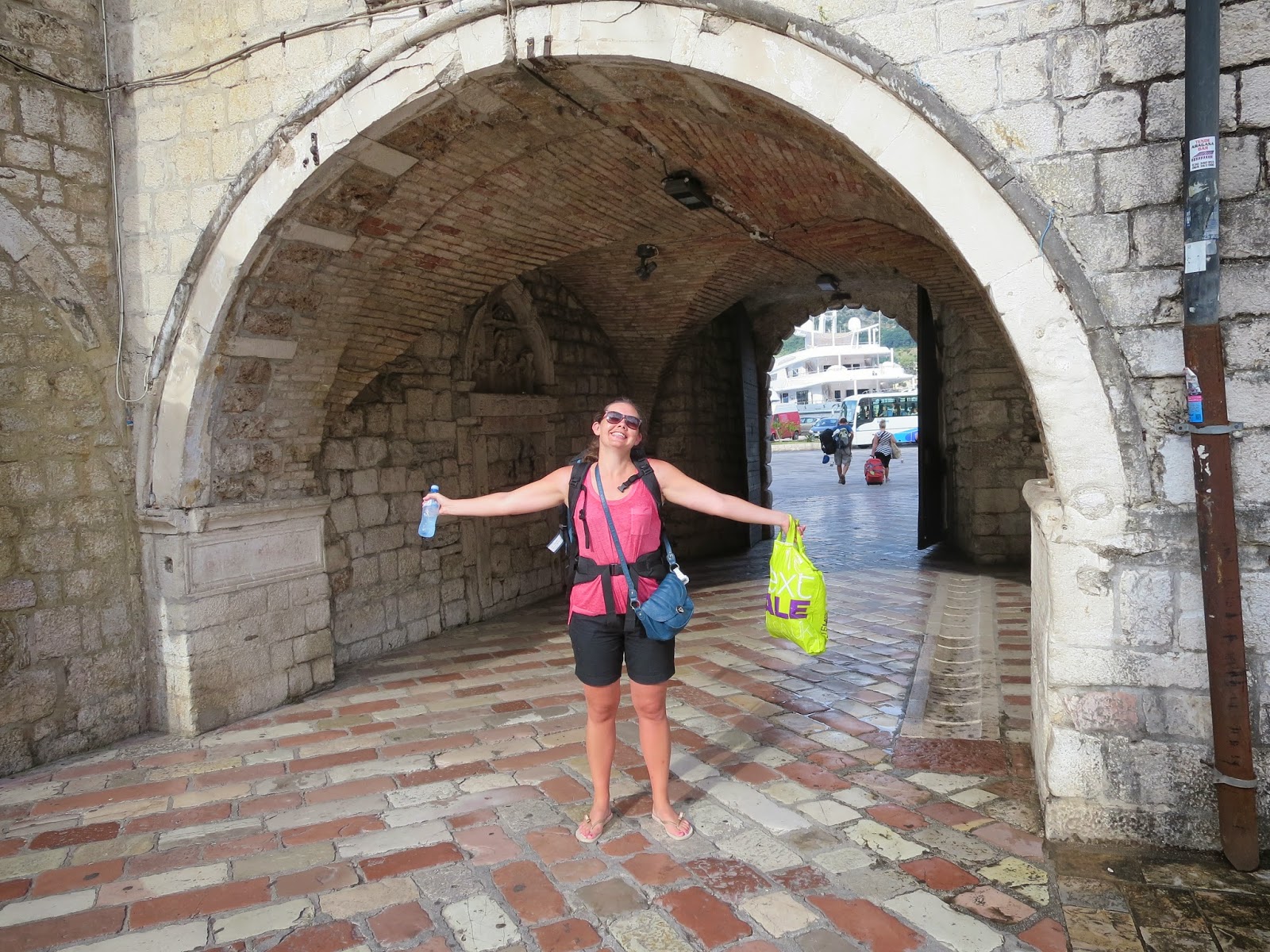 We caught a bus and settled in for a morning’s journey. Fortunately including a mid-point stop at a petrol station where we snacked on canned coffee, pizza crisps and a kit-kat style chocolate bar...not our healthiest breakfast! 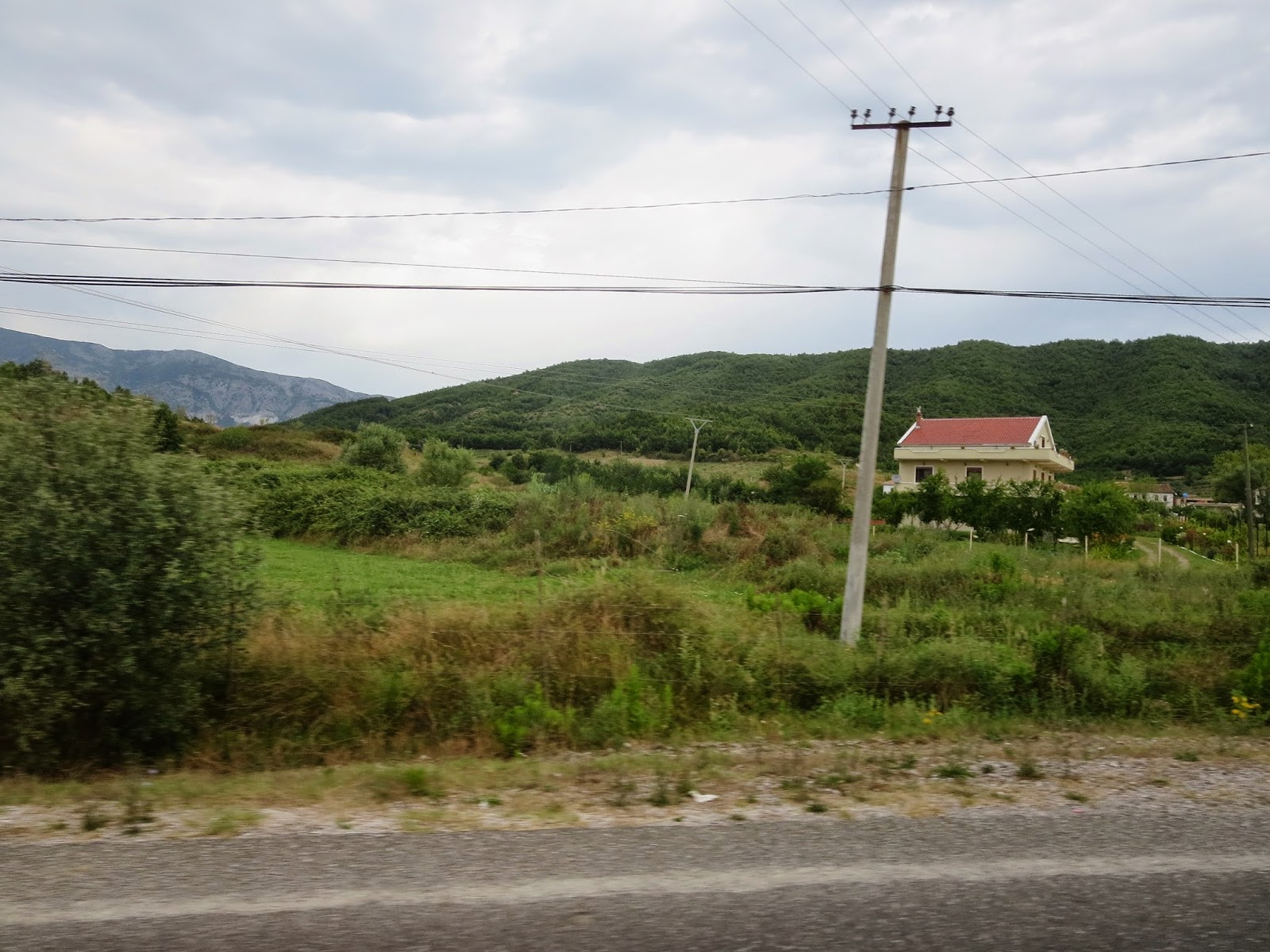 Not long after we crossed the boarder into Albania - the country felt almost instantly different. It’s a poorer country with more run-down buildings and cars.

Whilst heading towards Tirana, the capital city, we were on the lookout for ‘blood towers’ and bunkers…a strange ‘I spy’ I grant you!

‘Blood towers’ (Kullë) are mostly found in northern Albania and were originally Ottoman square tower houses built for military and residential purposes. However, certain kullës were used as ‘locked towers’ (kulla ngujimi) for use by people targeted by blood feuds (gjakmarrja - literally meaning ‘blood-taking’). Gjakmarrja (or ‘Hakmarrja’, meaning ‘revenge’) is the social obligation to commit murder in response to an earlier murder or moral humiliation, inline with the Albanian social code (Kanuni i Lekë Dukagjinit).

Bunkers (bunkerët), on the other hand, litter the countryside. From 1967, Albania’s communist ruler Enver Hoxha had over 700,000 bunkers built in the country (the equivalent to 1 for every 4 people). He taught the people that they had to be "vigilant for the enemy within and without" and, from 12 years old, Albanians were trained to be stationed in their nearest bunker to repel invaders. At least twice a month there would be armed bunker duty for up to three days. This massive construction was a drain on the country and are now mostly derelict and abandoned.

Arriving in Tirana was like walking into a hairdryer, it was so hot and dry. But we headed out to explore, nonetheless. We started from Skanderbeg Square, a large ‘island’ in the middle of roads with a statue in the centre, bordered on one side by the National History museum.

There are lots of city sights, including the Clock Tower of Tirana (Kulla e Sahatit), Et'hem Bey Mosque (Xhamia e Tiranës) and many churches and museums.

There is lots to honour Mother Teresa, an Albanian, including a public holiday, airport, hospital and the second largest square featuring a creepy-looking statue of her. 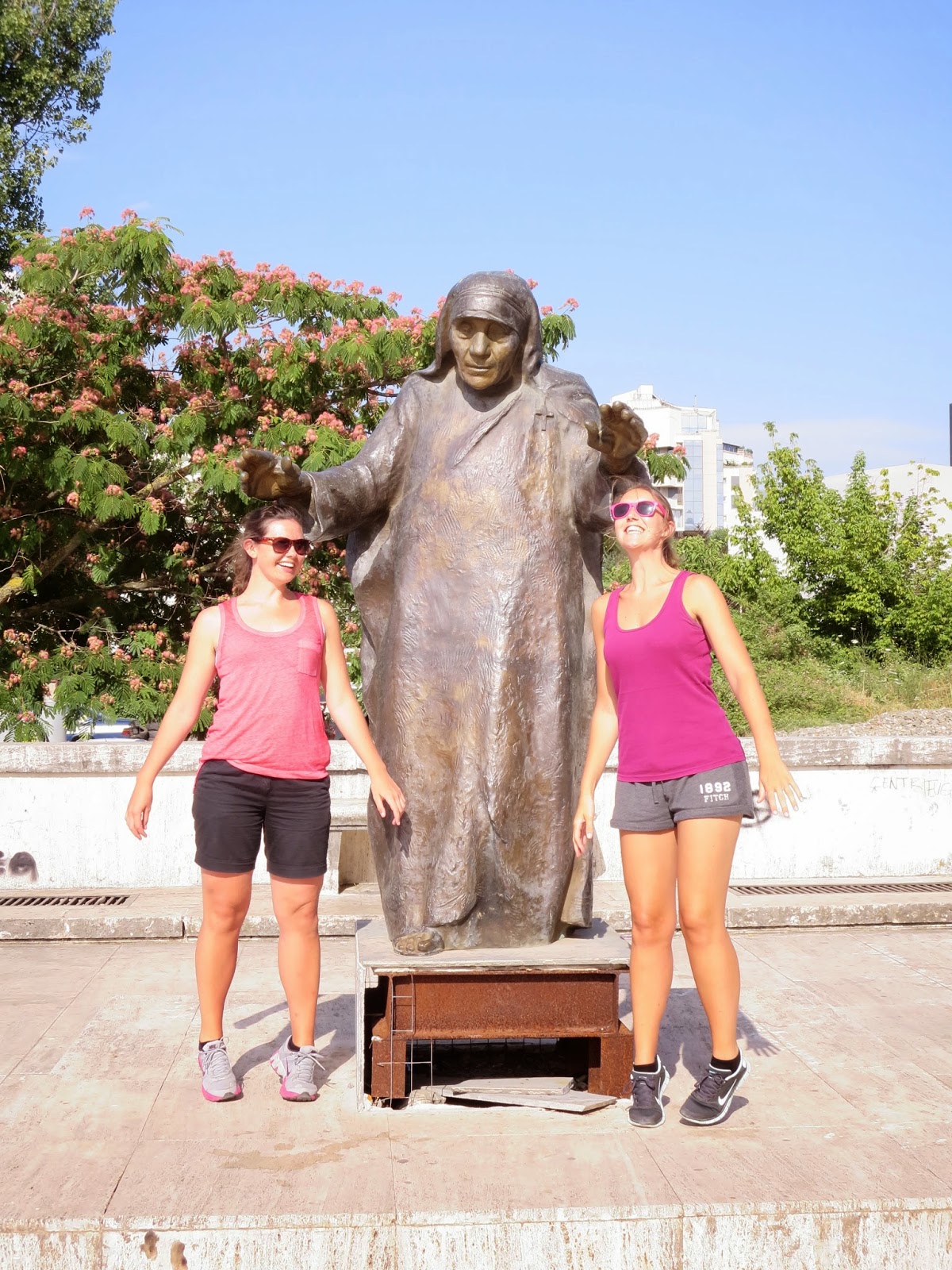 We also popped into a fake McDonalds for an iced coffee cool down. 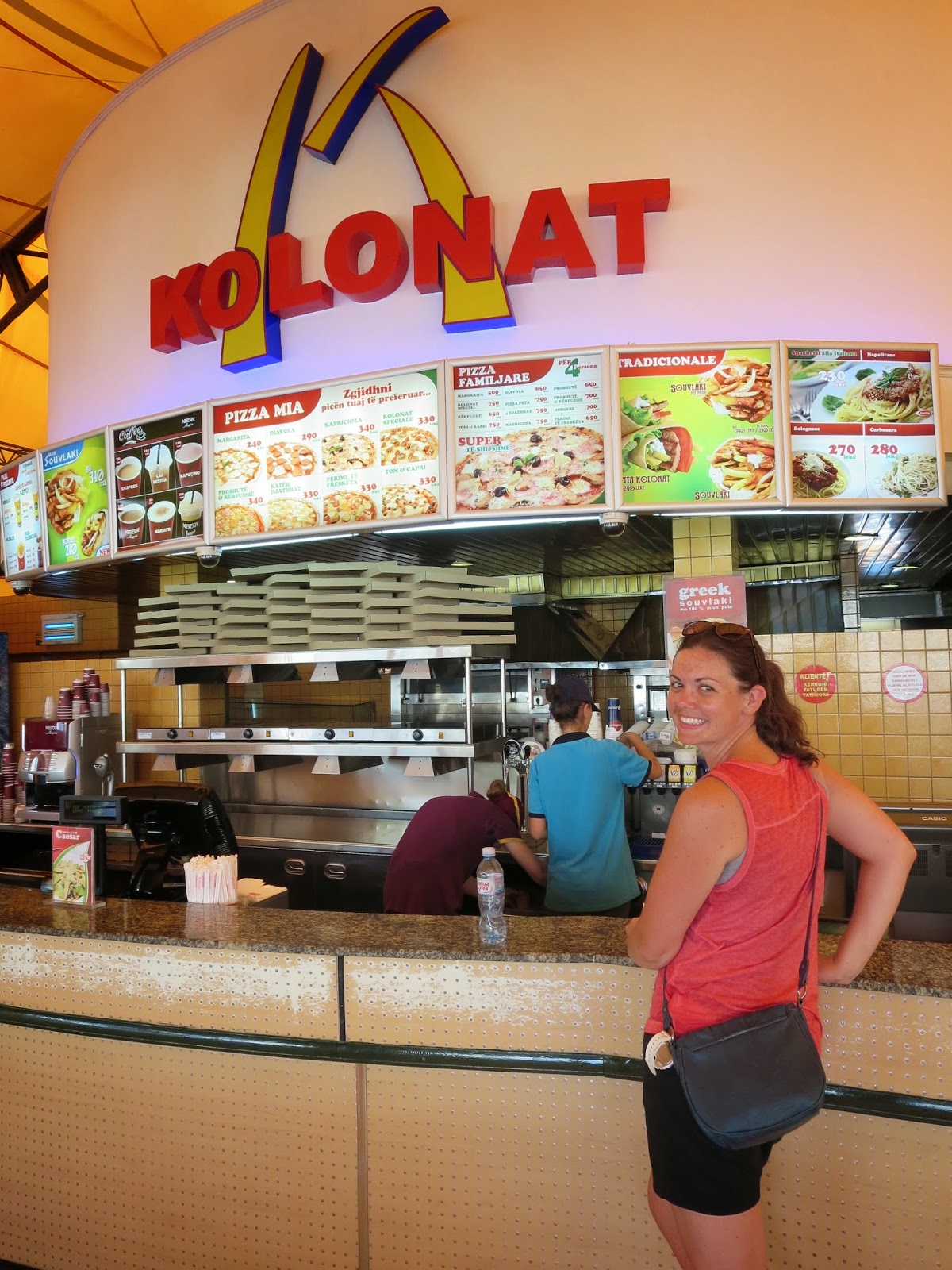 The highlight for me in the city was the colourful painted buildings and impressive graffiti. The slightly bizarre paint is due to the Mayor of Tirana, Edi Rama, in 2000. He sought to beautify the city, and with his artist training, set out to improve the post-Iron Curtain grey that dominated. He ordered a range of bright colours and requested painters to cover city buildings with geometric patterns.

Next up was ‘The Pyramid: International Center of Culture’ (Piramida), a museum opened in 1988 and designed by the daughter of Enver Hoxha. It started as a museum, before becoming a conference centre. The now derelict building is potentially to be destroyed but in the meantime can be climbed up. 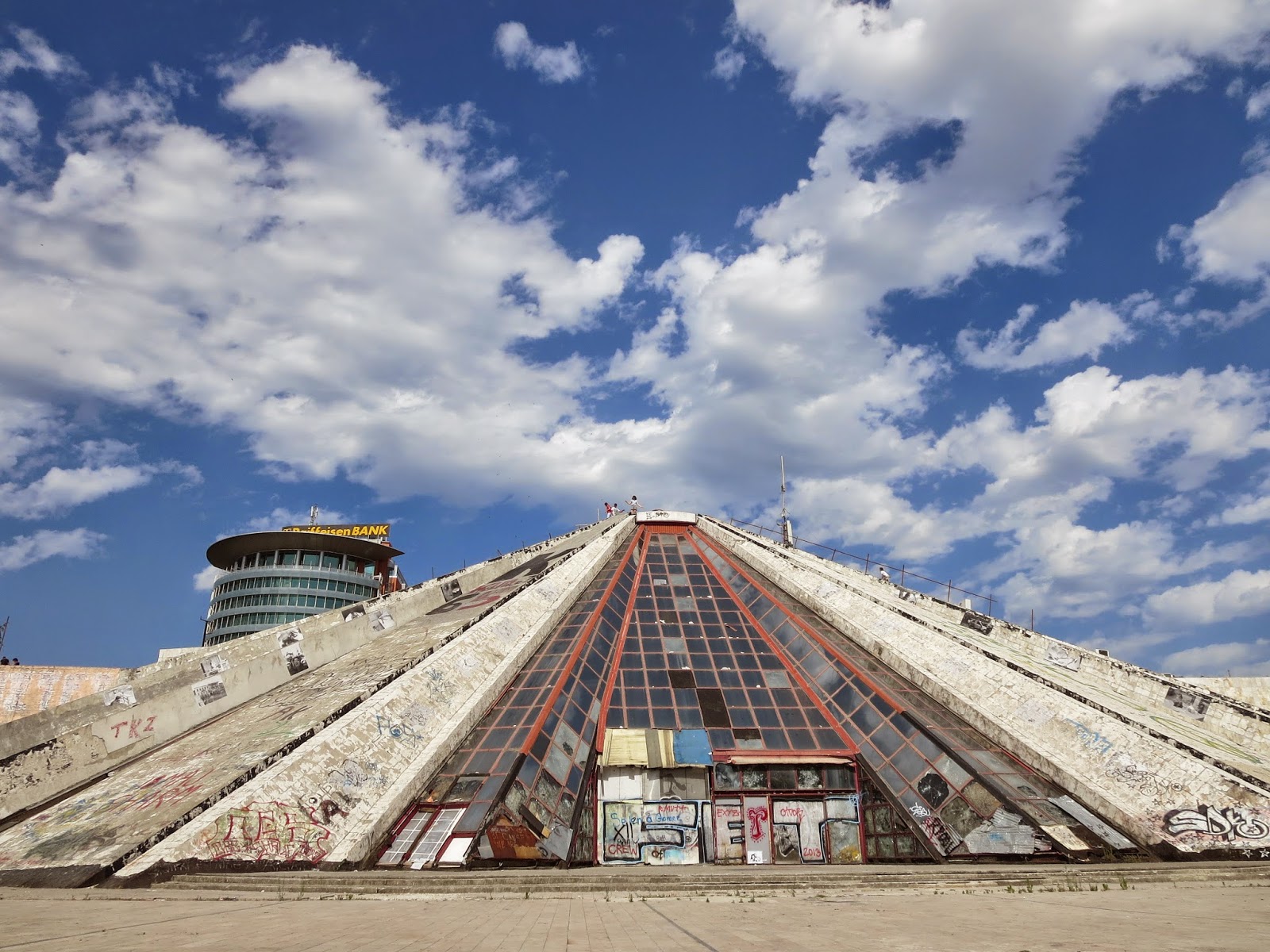 Final stop was the Sky Hotel with it’s panoramic rotating bar (not ideal for those suffering from motion sickness...myself included!) giving views over the city and Dajti Mountain which overlooks it.

After spotting 'AFC' we headed back to the hostel for showers, feeling dirty and sweaty after traipsing around the capital.

We headed to Blloku for dinner, the nightlife area.

There we ordered a mixture of traditional Albanian food….kicking off with mixed starters, including stuffed peppers, cheese pancake, corn breads with dips of paprika and pesto, aubergine, feta, olives, stuffed bind leaved, sausage and beans. 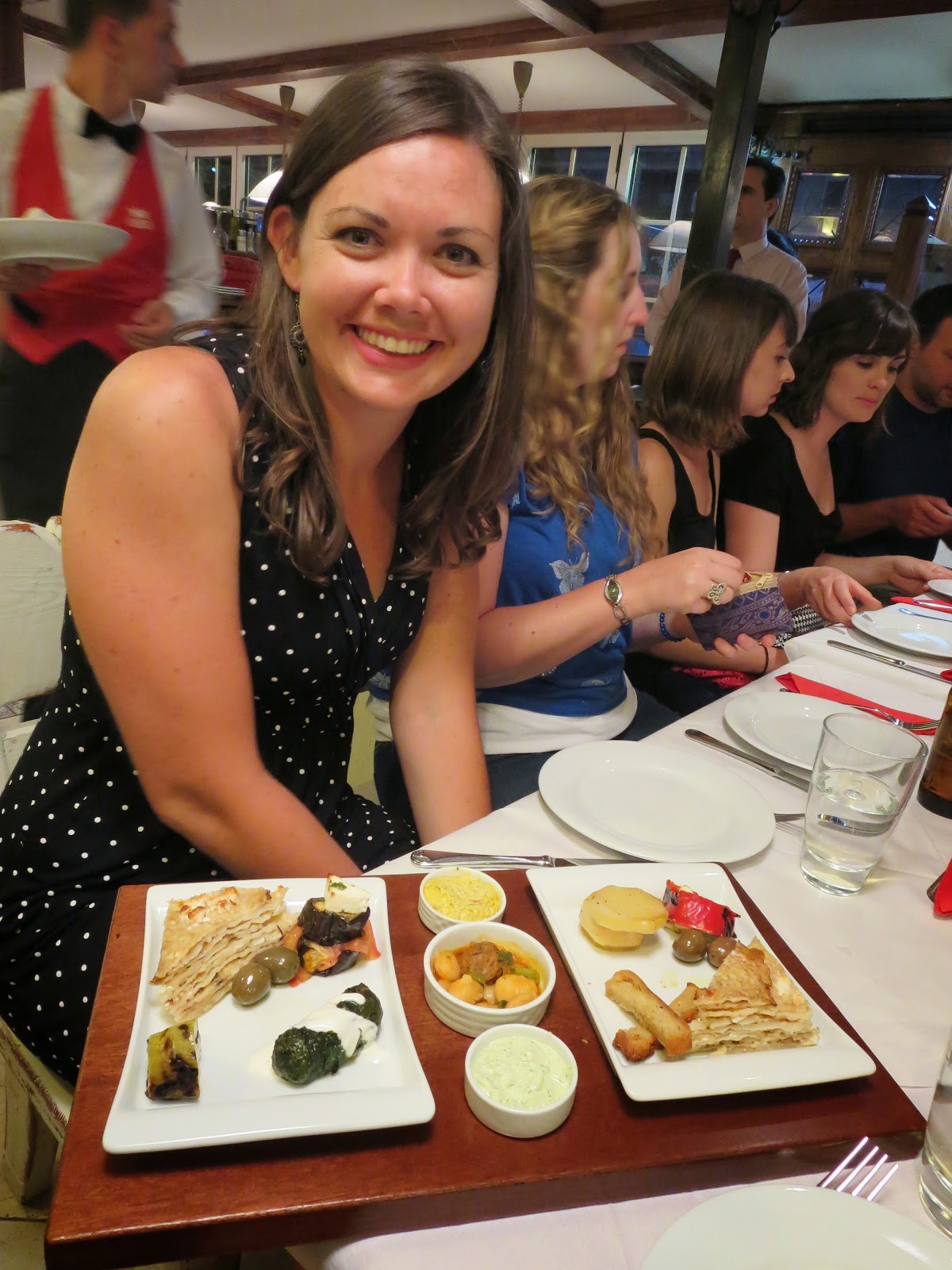 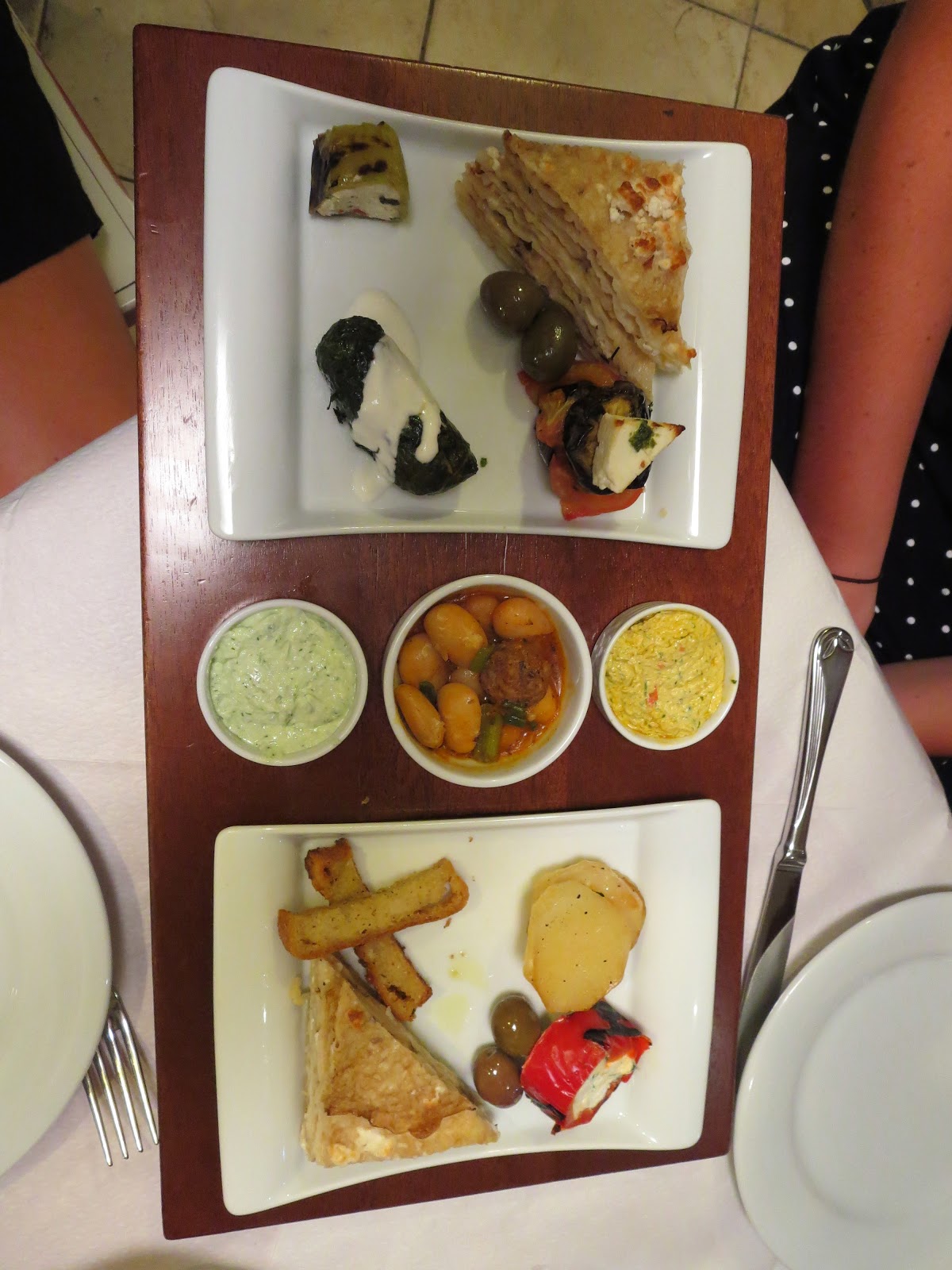 Followed by Fergesë (baked peppers, egg and cheese), and veal.

We had a drink before World Cup Fever took over and every bar and roadside was dominated by large screens playing the latest game, so we escaped back to bed! 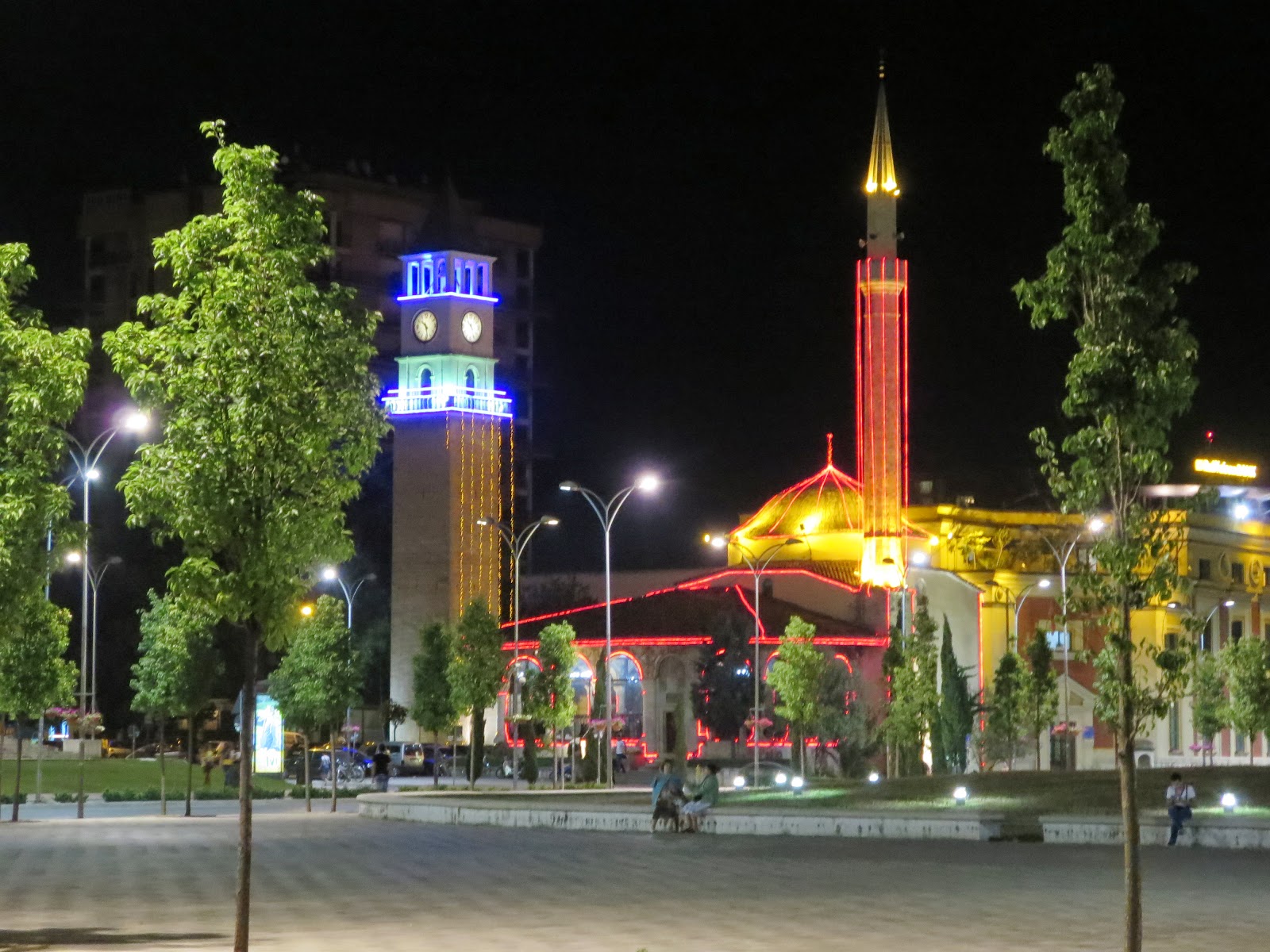 I wouldn't really recommend Tirana, it wasn't a place I really enjoyed.  However, if you liked Montevideo, Uruguay then this city really reminded me of there...