Posted by The Hungry Traveller on 12:57 in Germany Travel | Comments : 0

The 4-day weekend in Germany gave me plenty of opportunity to explore more of Munich’s surrounding area. On the Sunday, I headed to Chiemsee, a freshwater lake south of the city, between Germany and Austria. I’d spotted it on my drive to/from Salzburg and so decided to have a day trip to explore the ‘Bavarian Sea’ in Chiemgau, only 60km southeast of Munich.
Chiemsee is a natural lake, almost 80km2 big, and has 3 main islands: Herreninsel (aka “Gentlemen’s Island”), Fraueninsel (aka “Ladies’ Island”) and Krautinsel (aka “Cabbage Island”).

There is a good boat-bus service around the lake from various points, transporting you to the islands or other sides of the lake.

I parked up in Prien-am-Chiemsee, a town on the west of the lake and bought a boat-pass for the day.  The "Chiemsee Bockerl" (steam train) was set up in 1887 to run between the town and Stock habour and is still popular with tourists to reach the lake.

Firstly I headed to the largest island, Herreninsel, admiring the beautiful surroundings as we sailed.

Arriving on the island, there is a short walk to Herrenchiemsee Neues Schloss (New Palace). This palace was built by King Ludwig II in 1878-1885 as a replica of the French Palace of Versailles, unfortunately it was never completed. 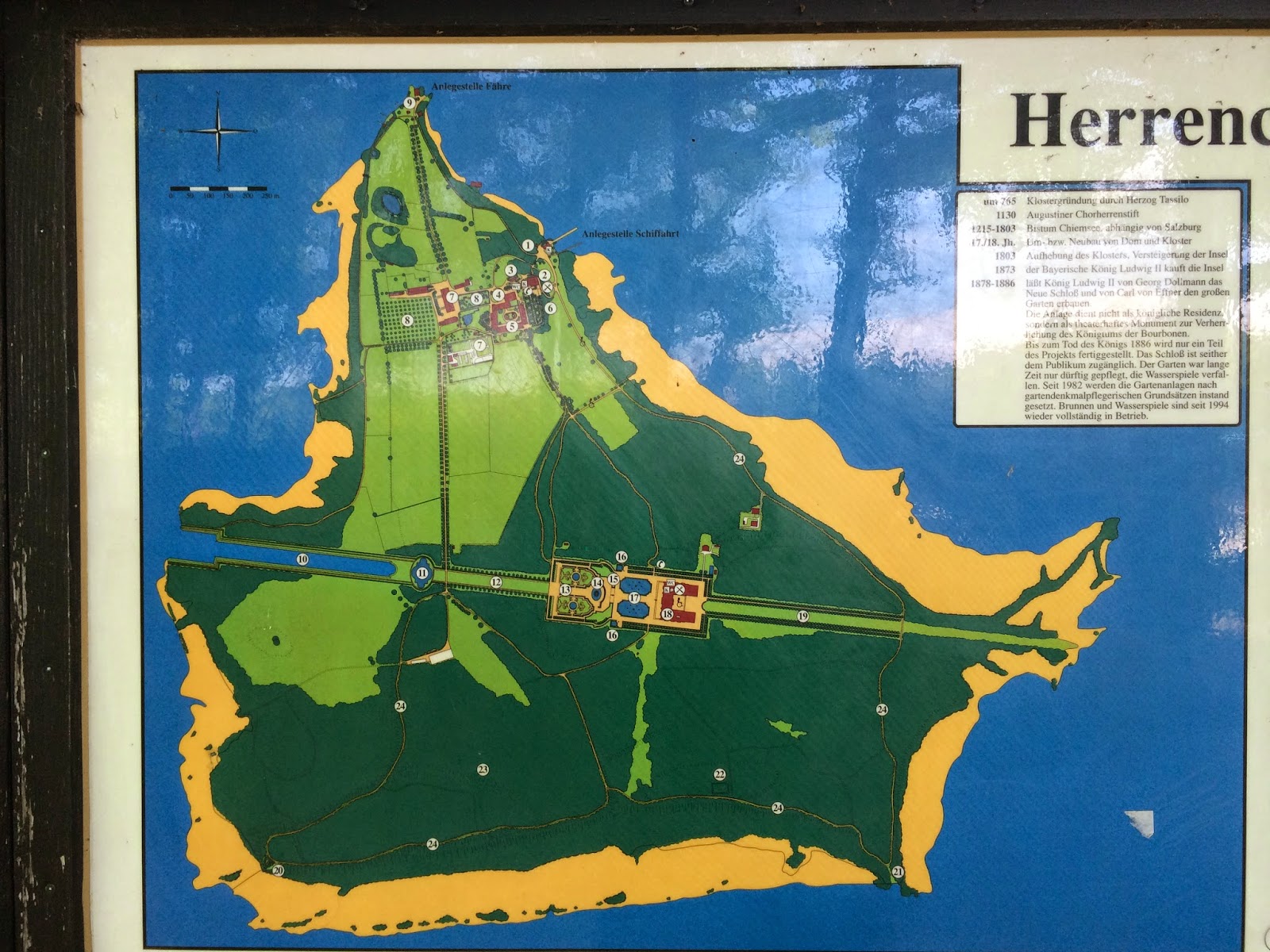 It's a short walk from the pier to the palace through the countryside.

You approach the palace through the impressive and formal fountain-filled gardens.

The fountains and their statues echo Versailles, paying tribute to Ludwig’s interest in fantastic romanticism and Wagner’s operas. 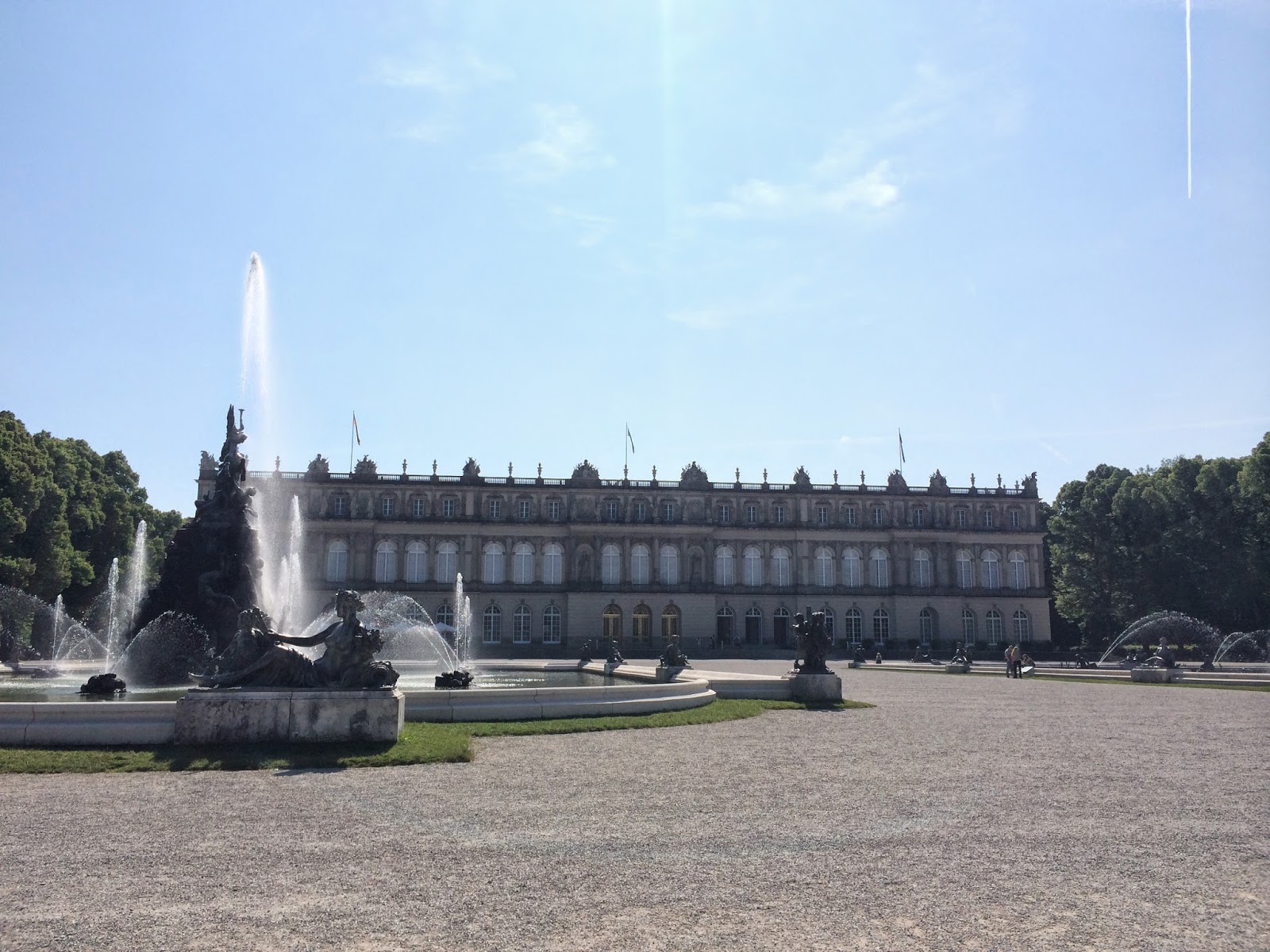 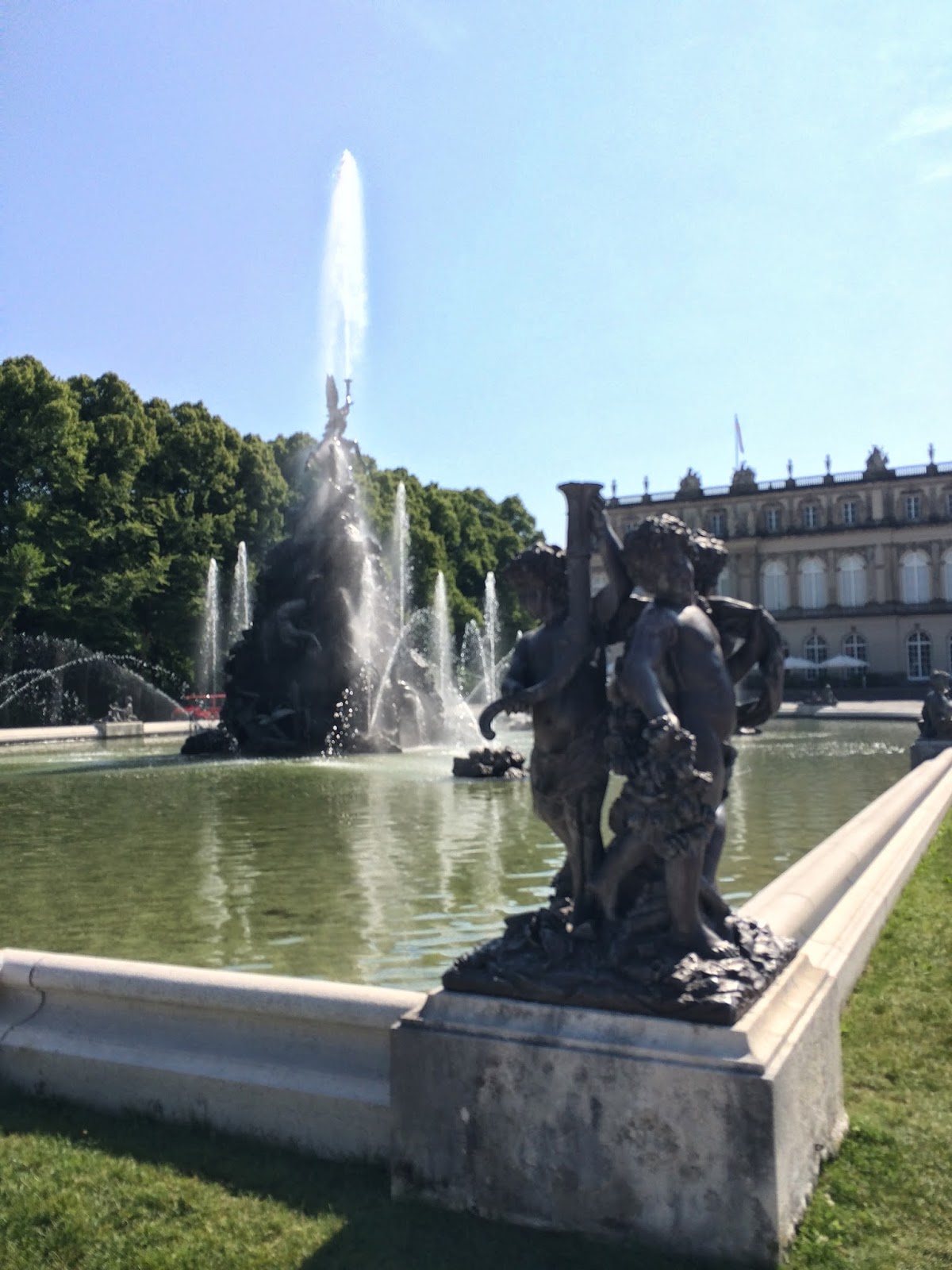 Hundreds of millions of dollars / pounds / euros was spent on this unfinished palace which Ludwig only stayed in for a few days before his death the following year. Once he died, all construction worked was stopped and the building opened to the public, much like Neuschwanstein Castle.

I had a wander through the rest of the gardens before heading inside the palace.

Unlike medieval Neuschwanstein however, this palace was built in tribute to King Louis XIV of France. I joined a tour around the castle (unfortunately no pictures allowed) and it was impressive to see the interior. 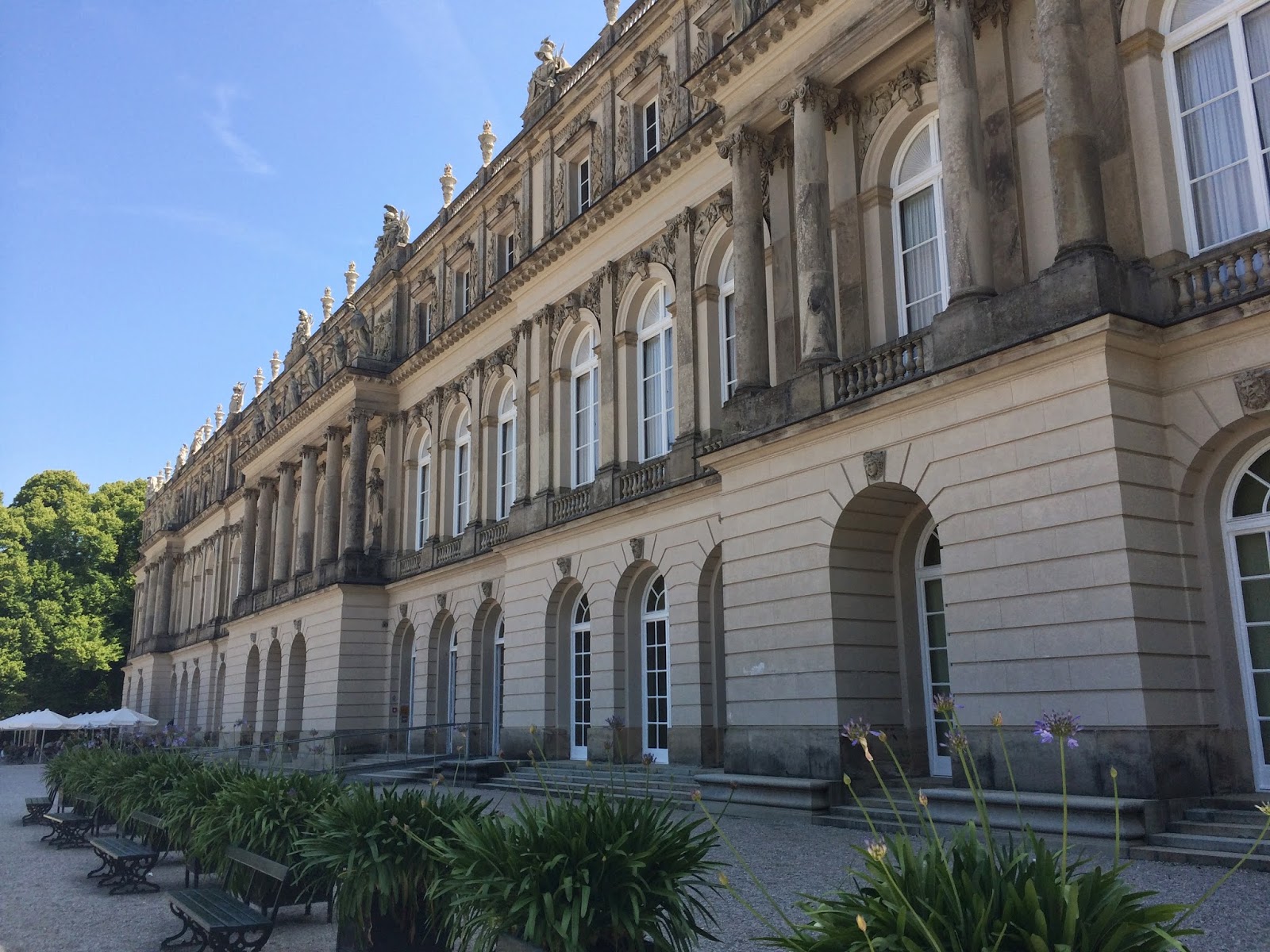 The building has 70 rooms but 50 were never completed. The highlights of the tour were the Great Hall of Mirrors (with 17 arches, the same as Versailles, and a ceiling painting of Louis XIV), the Hall of Peace and the Hall of War as well as the world’s largest Meissen porcelain chandelier and a dining room, complete with an elevator table. 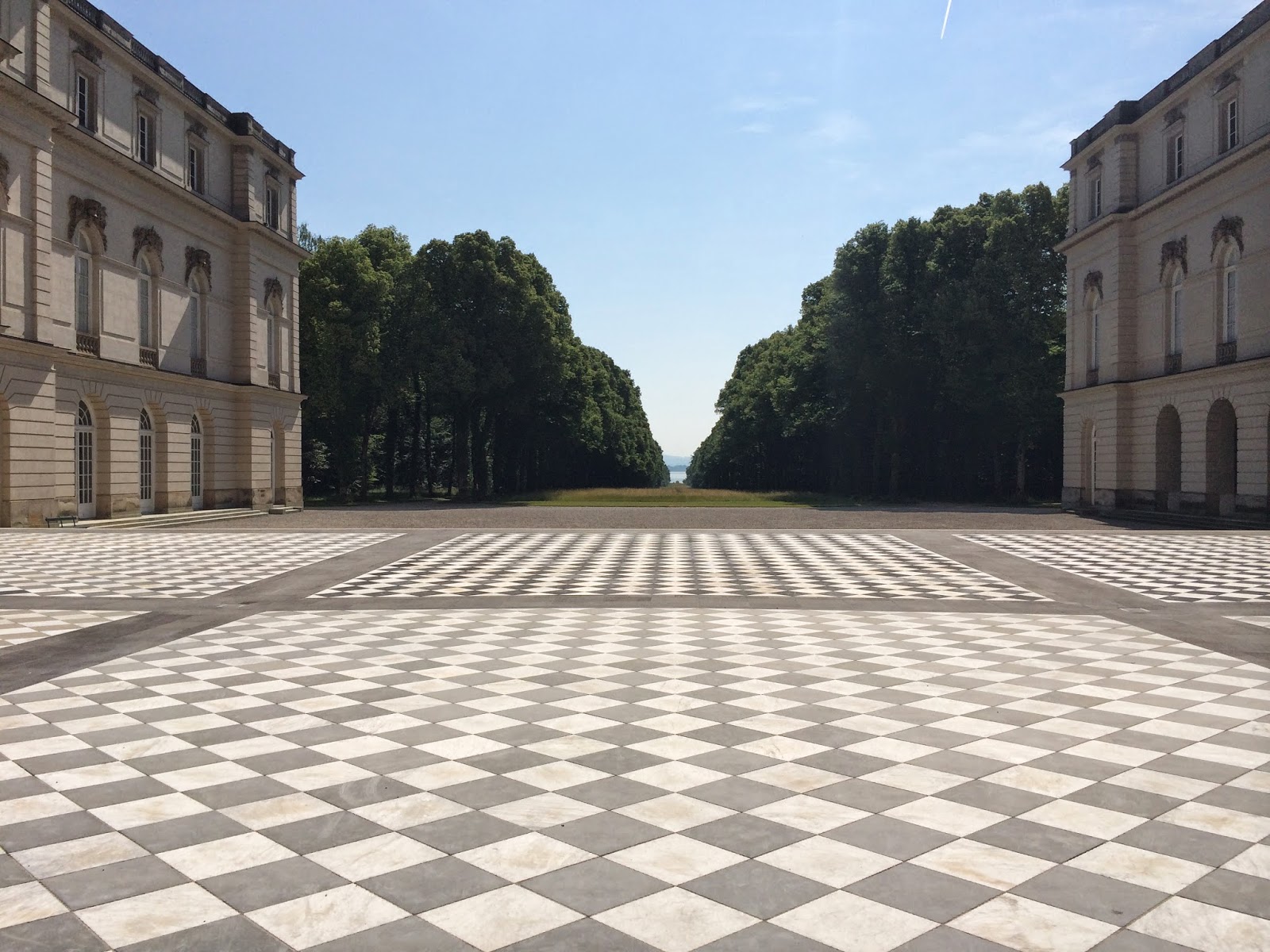 Herreninsel is also 'bat island' - 15 of the 23 bat species known in Bavaria are found on the island.  The palace's attic also is home to the nursery colonies of  greater mouse-eared bat, the lesser horseshoe bat and Geoffroy's bat.

Next up was a visit to Herrenchiemsee Abbey (the Old Palace). Originating in approx 620AD, it was transferred to various owners before the island was sold and the abbey turned into a brewery. When Ludwig acquired the island in 1873 he had the remaining building converted for his private use (where he stayed to survey the construction of his palace).

It is now an art gallery.

After exploring Herreninsel I hopped on a boat over the Fraueninsel.

This car-free island houses an active Benedictine nunnery which was build in 782 AD and a small village, home to 300 permanent residents and 30 nuns.  The island is most famous for the nun’s produce of a spirit called Klosterlikör and marzipan.

I walked across the island and stopped at a bustling restaurant on the lake front for lunch. 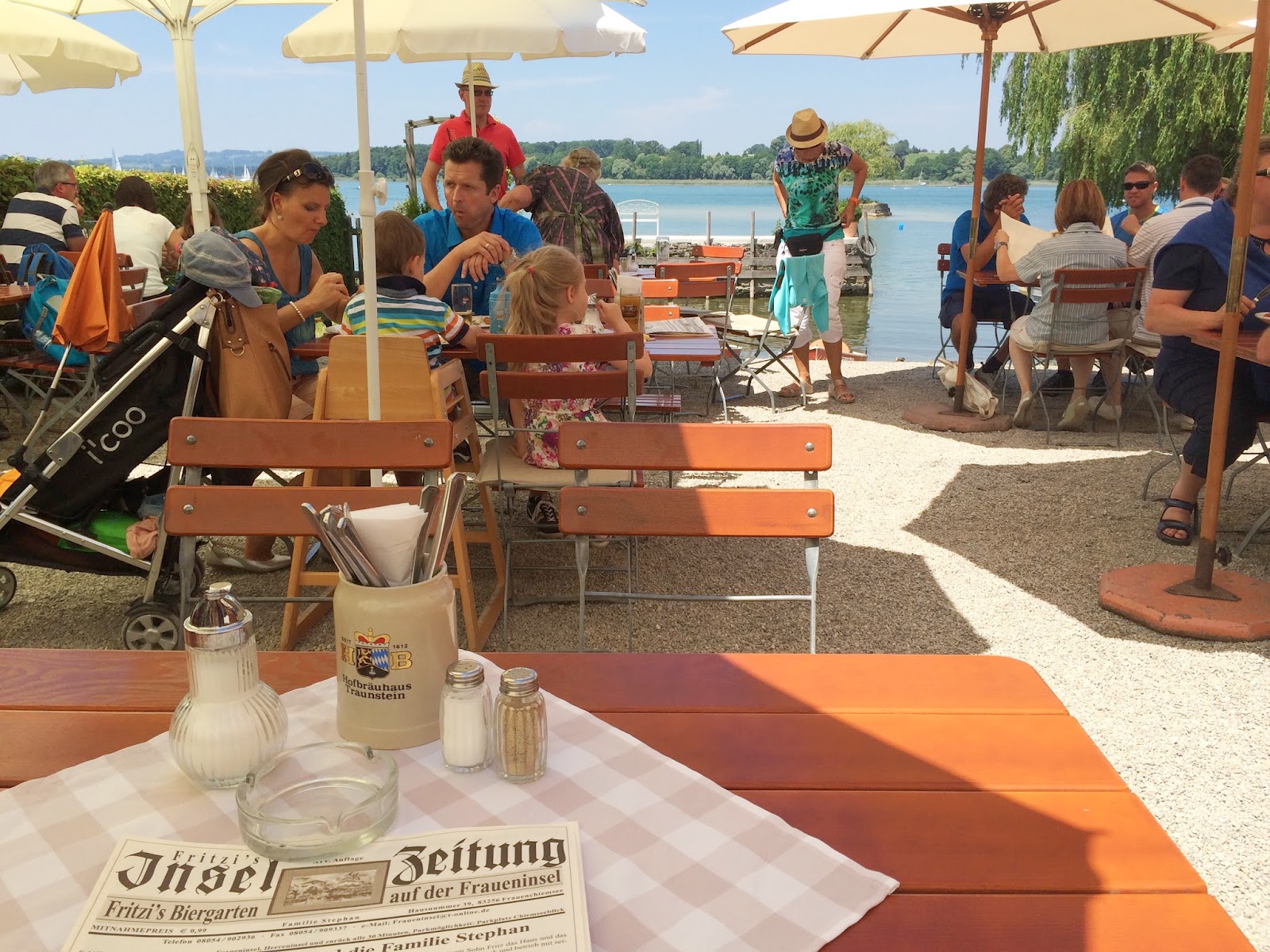 I decided to embrace the German food and selected a 'sausage salad'. I don't know what you'd expect if you ordered this dish but I certainly didn't get what I was anticipating...

It was basically Fleischwurst (bologna) thinly sliced and mixed in with some onion and cheese! Very bizarre..

Some ducks wandered in while I was eating to keep me company.

I tucked in, only to discover when I came to pay that they wouldn't accept debit/credit card for my meal. I had checked this beforehand, knowing how Bavarian restaurants often won't for some reason, and they'd said I could - it turns out this was only for meals for over 50 euros...well my 10 euro bill wasn't even close. There are no ATMs on the island either so I was stuck. Fortunately the old German couple I was sharing a table got involved and very kindly offered to pay for my lunch. I couldn't believe it! I'd only chatted briefly to them through our meals but they said that they often benefited from the kindness of strangers when travelling and wanted to share that. So sweet of them and a very nice 'pay-it-forward' view of the world.

Post-lunch I decided to walk around the whole island…it’s very small so not as impressive an accomplishment as it may sound.

It was very cute though – lots of boats and flower-covered houses.

After exploring the island, I decided to head back to Prien on the mainland.

The views back were stunning in the sunshine and there were hundreds of people out in their boat, making the most of it.

An arts market had set up next the pier so I had a good wander through there before heading back to Munich.