Posted by The Hungry Traveller on 15:25 in Europe Food Travel | Comments : 0

Today was a day of mixed emotions - the fact we were leaving Corfu meant we were heading to our final destination, bringing our fab holiday to an end, but - I was super excited to be off to Athens!

Breakfast ticked off another Greek food - Greek yoghurt with honey!

Then it was time to fly from Corfu to Athens, arriving around lunchtime.

We checked into our hotel, situated just off Athenian street which was very handy.  First stop was another food-stop and we just couldn’t resist having another gyros pita - this time ‘kebab’ flavour! 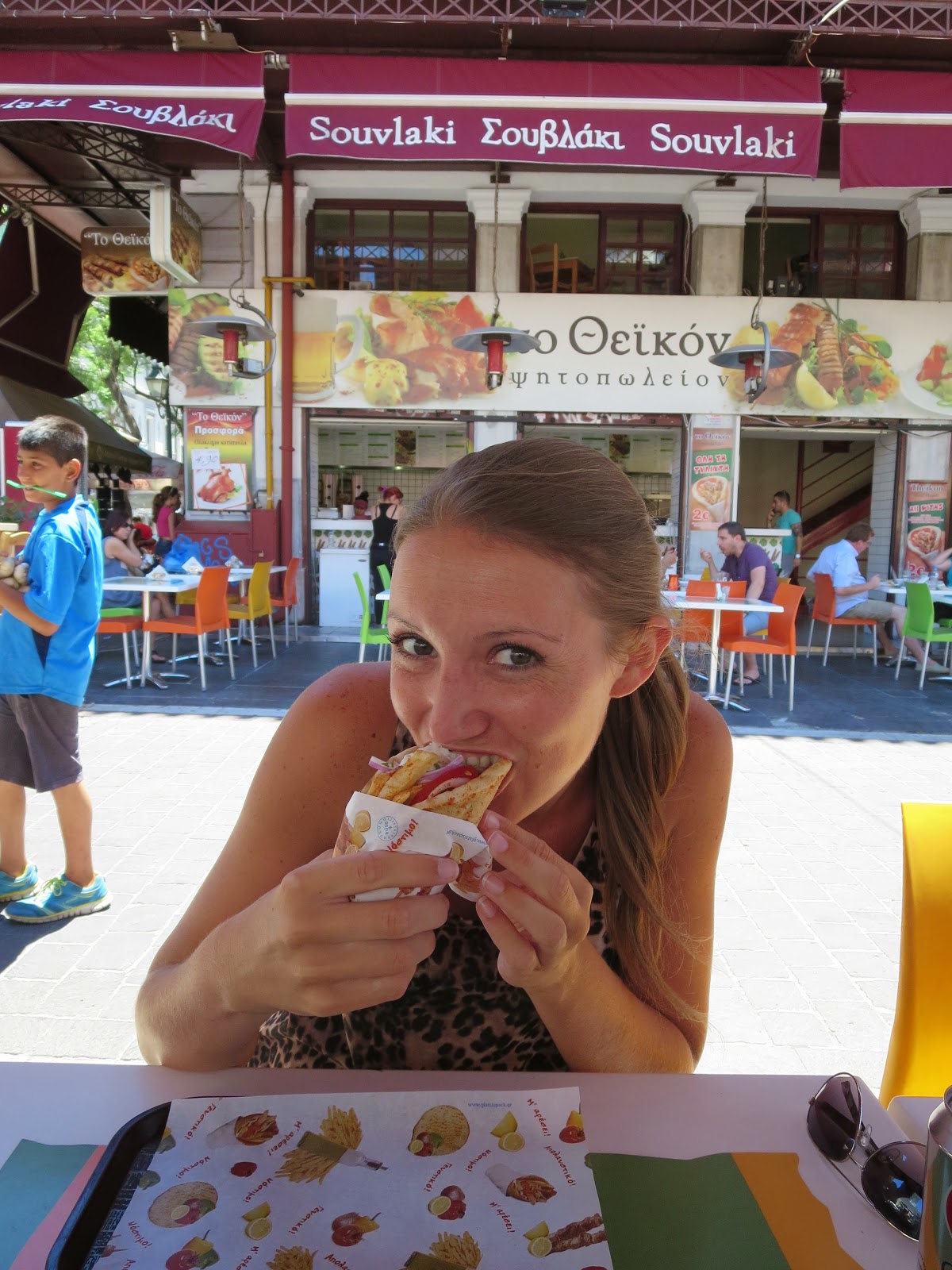 The fast food place was across the road from a massive food market so, of course, we had to explore!

There was masses of dried fruits and nuts, including red pistachios (Fystiki) which were super-salty. This exclusive pistachio is grown on the island of Aegina and often salt-roasted. 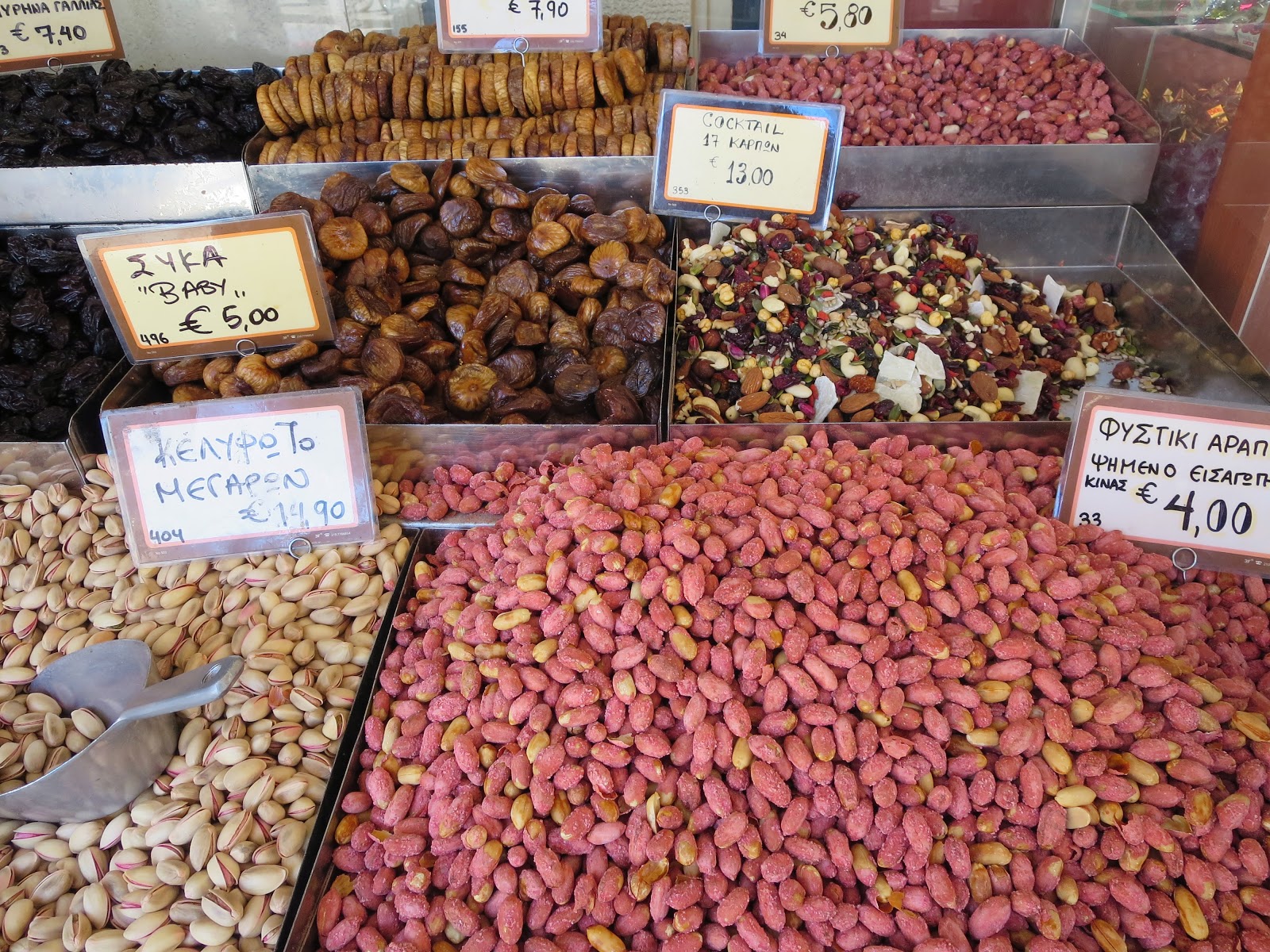 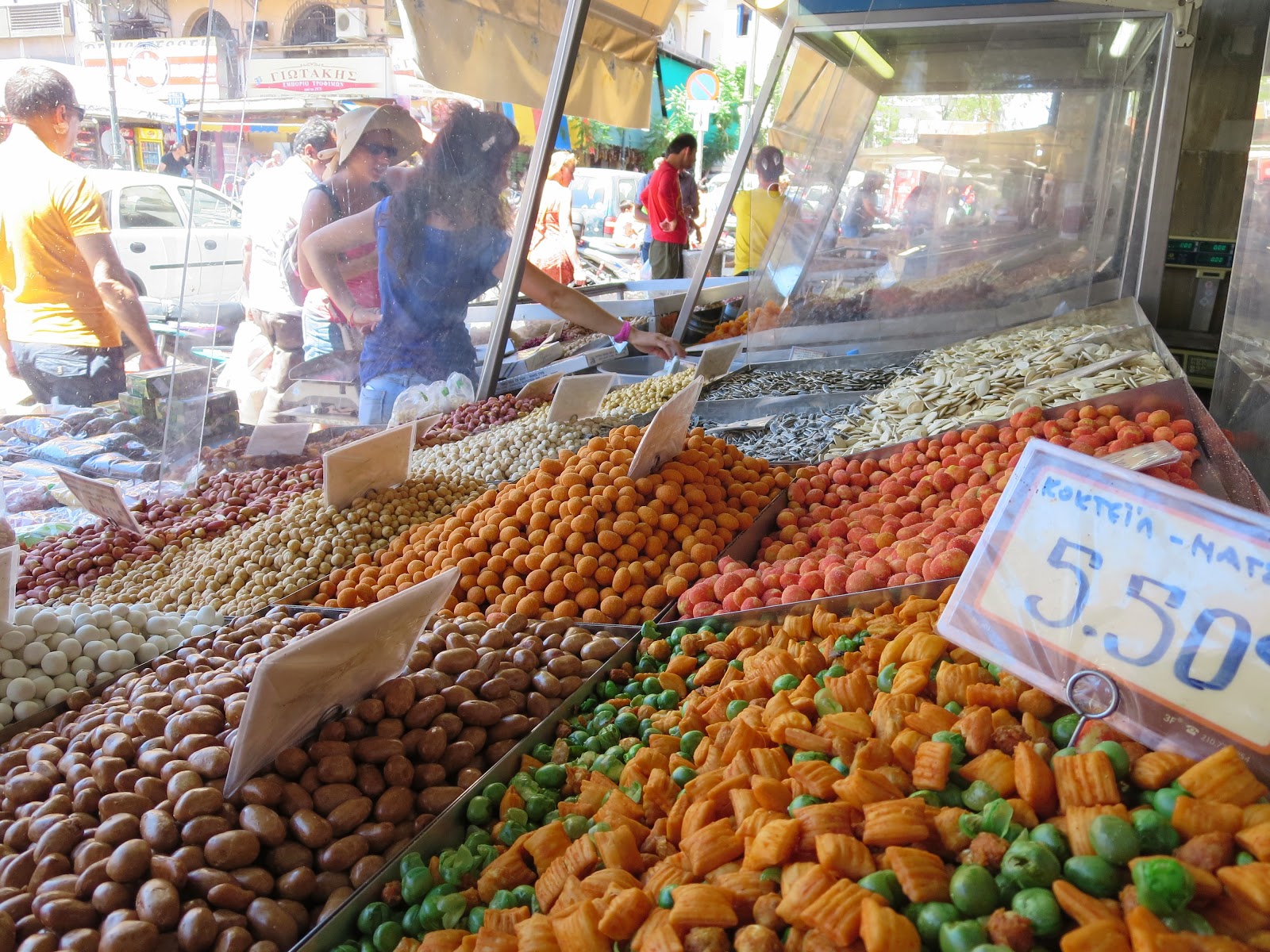 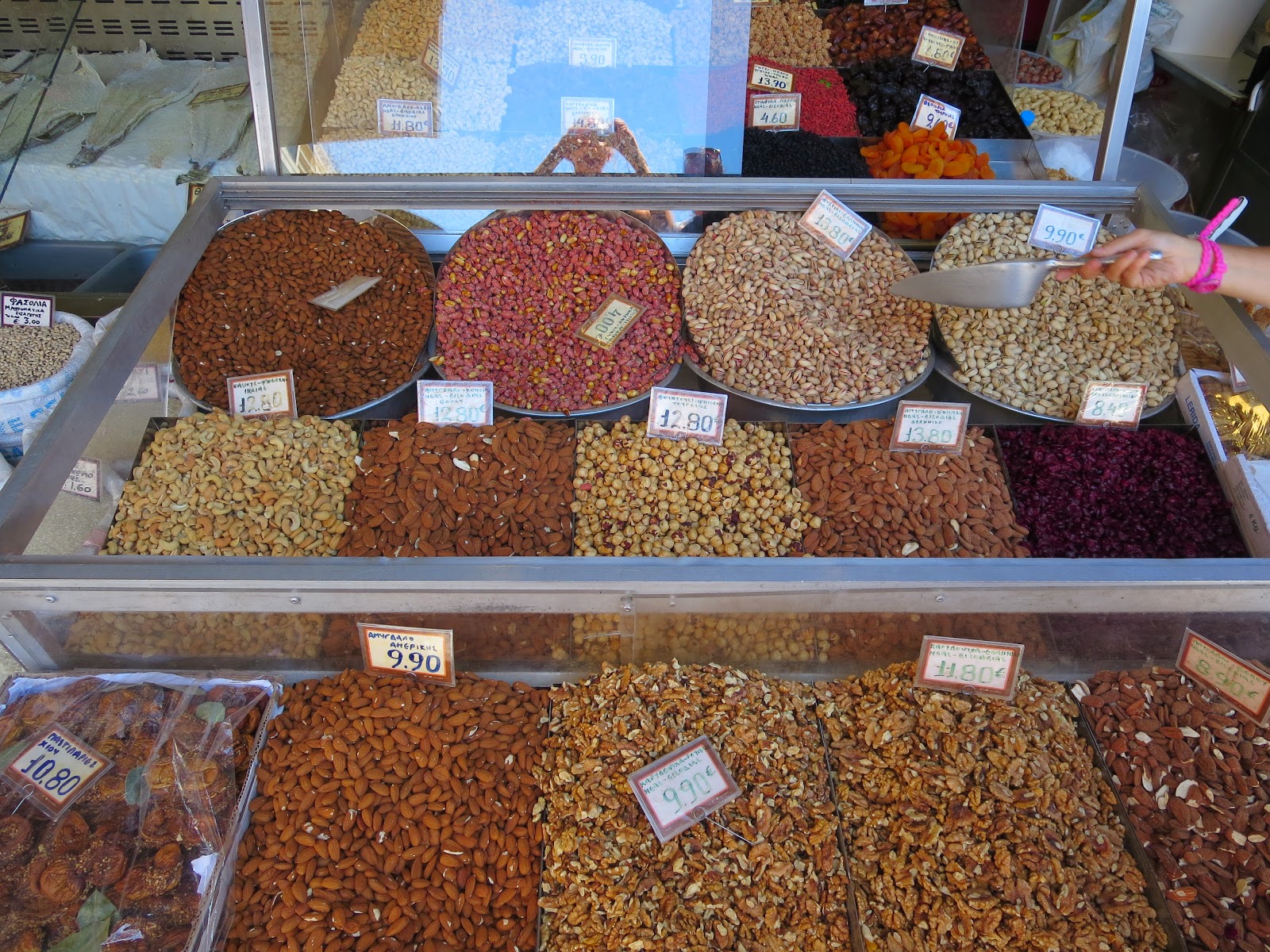 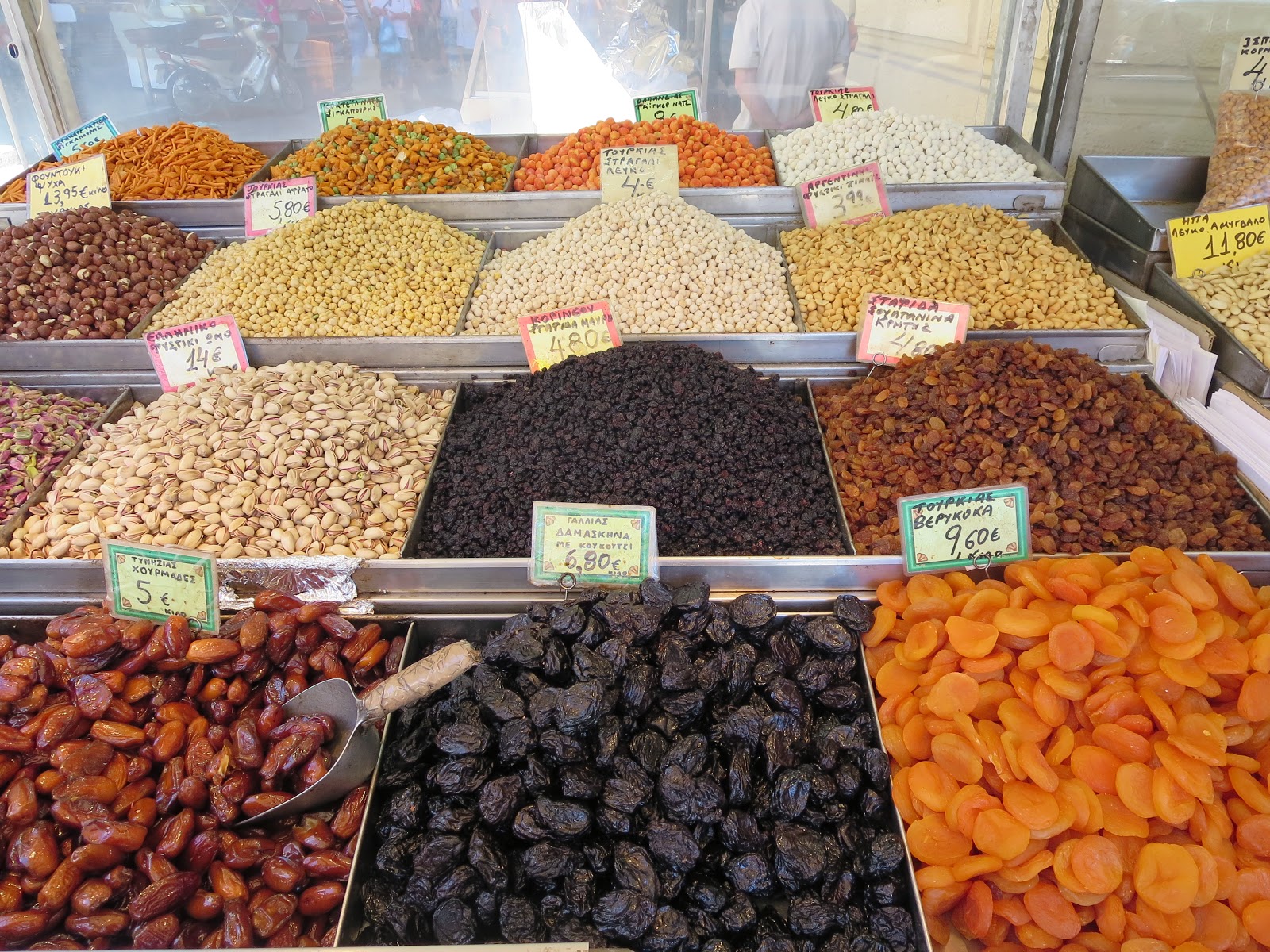 A massive fish market also was in the same venue but funniest of all was the meat market…where we were basically the meat! 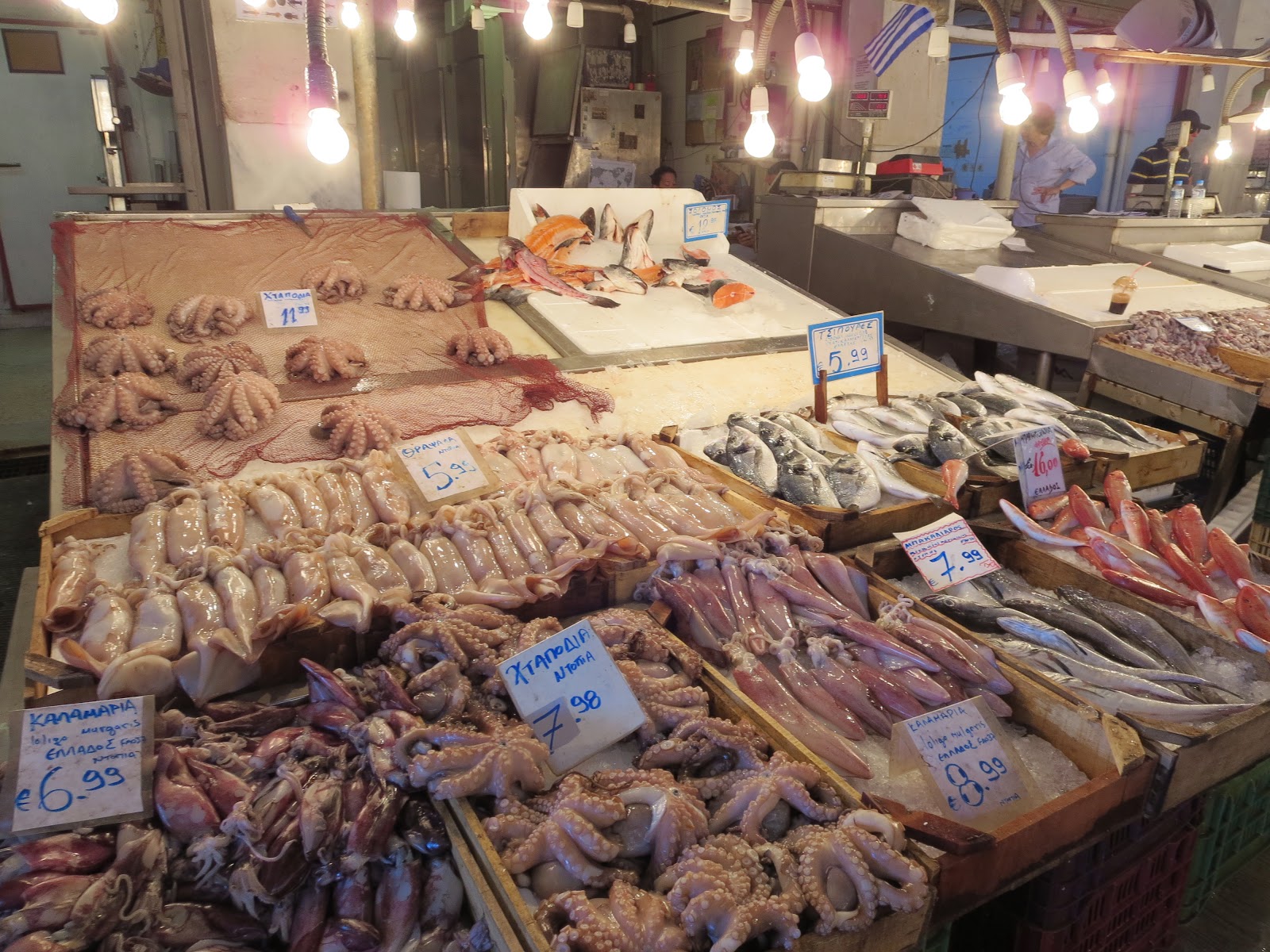 We had clearly interrupted a male-dominated area as we strolled through, checking out goat heads and other random meat parts!

Having worked up a thirst, dodging admiring Greek butchers, we headed to a coffee shop for a tasty treat…freddo (iced) cappuccino and loukoumades. These are similar to small doughnuts - fried balls of dough sprinkled with your choice of topping (we went for just icing sugar).

Seeing our interest, they made us a fresh batch and produced light delicious tasting treats for us! 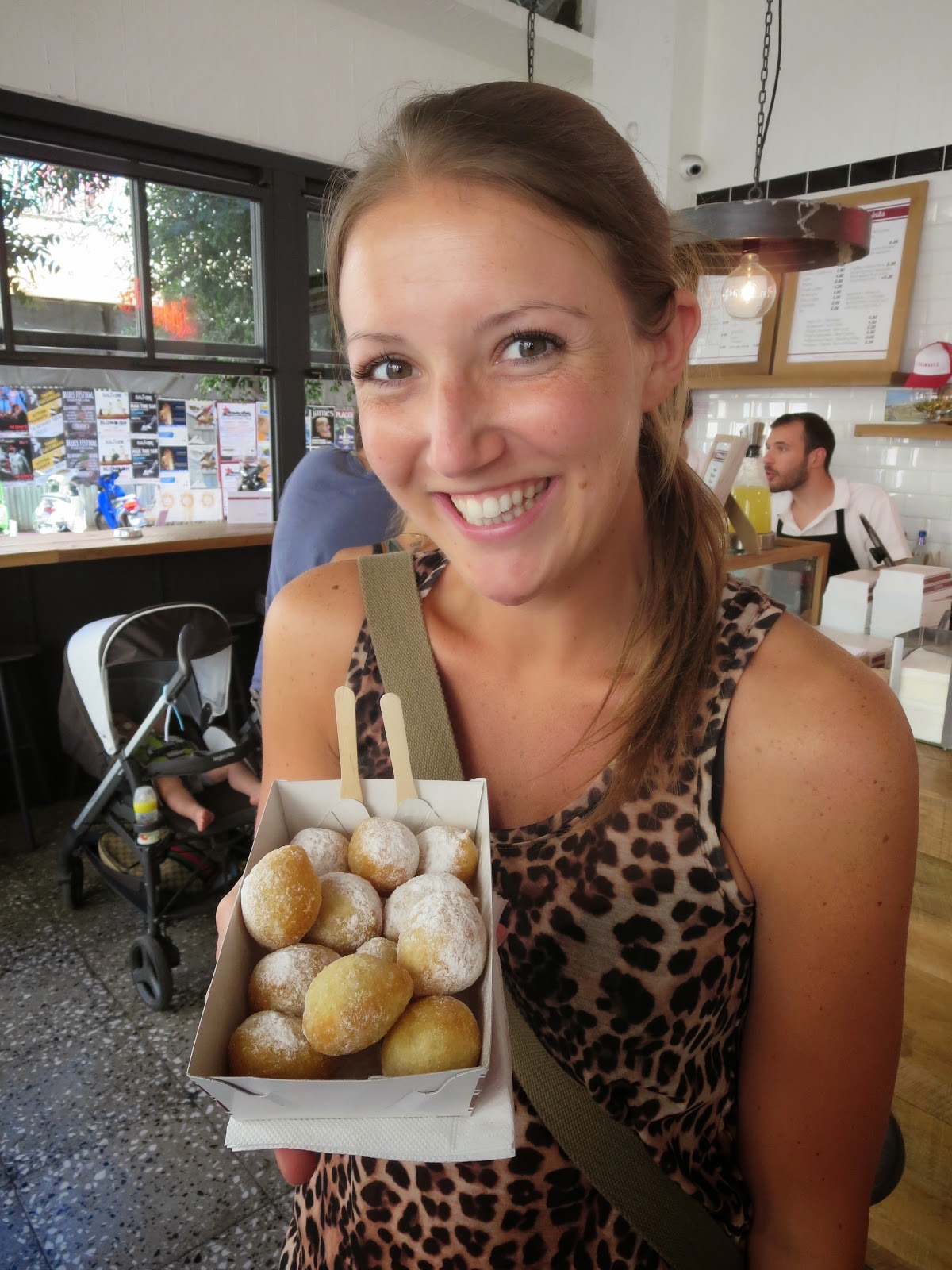 Next up was time to wander around the city to get our bearings and check out some of the tourist highlights.

Athens is named after the goddess of wisdom, Athena, and it’s history is a mixture of mythology and fact. The city is full of bustling streets, ancient ruins, lively cafes and scrummy food - a perfect combination!

We started at Plateia Monastiraki, a square giving us a first glimpse of the world-famous Acropolis.

We peeked in at bakeries lining the streets to admire the Greek sweets, including: Kandaifi (similar to baklava with a base of shrewd filo dough, filled with chopped nuts and swimming in a rich syrup); Galaktoboureko (custard baked between layers of filo, then soaked with lemon-scented honey syrup); Loukoumia (similar to Turkish delight, made from starch and sugar and flavoured with rose water or mastic) and Bougatsa (sweet semolina custard, wrapped in fresh filo pastry and sprinkled with sugar).

From there we walked up the main shopping street (Ermou) to Plateia Syntagmos, home to the Parliament building (and where the changing of the guard takes place). The guards are traditionally costumed evzones of the Tomb of the Unknown solider and we made a note to return the next day (Sunday) for the 10.30-11am ceremony. 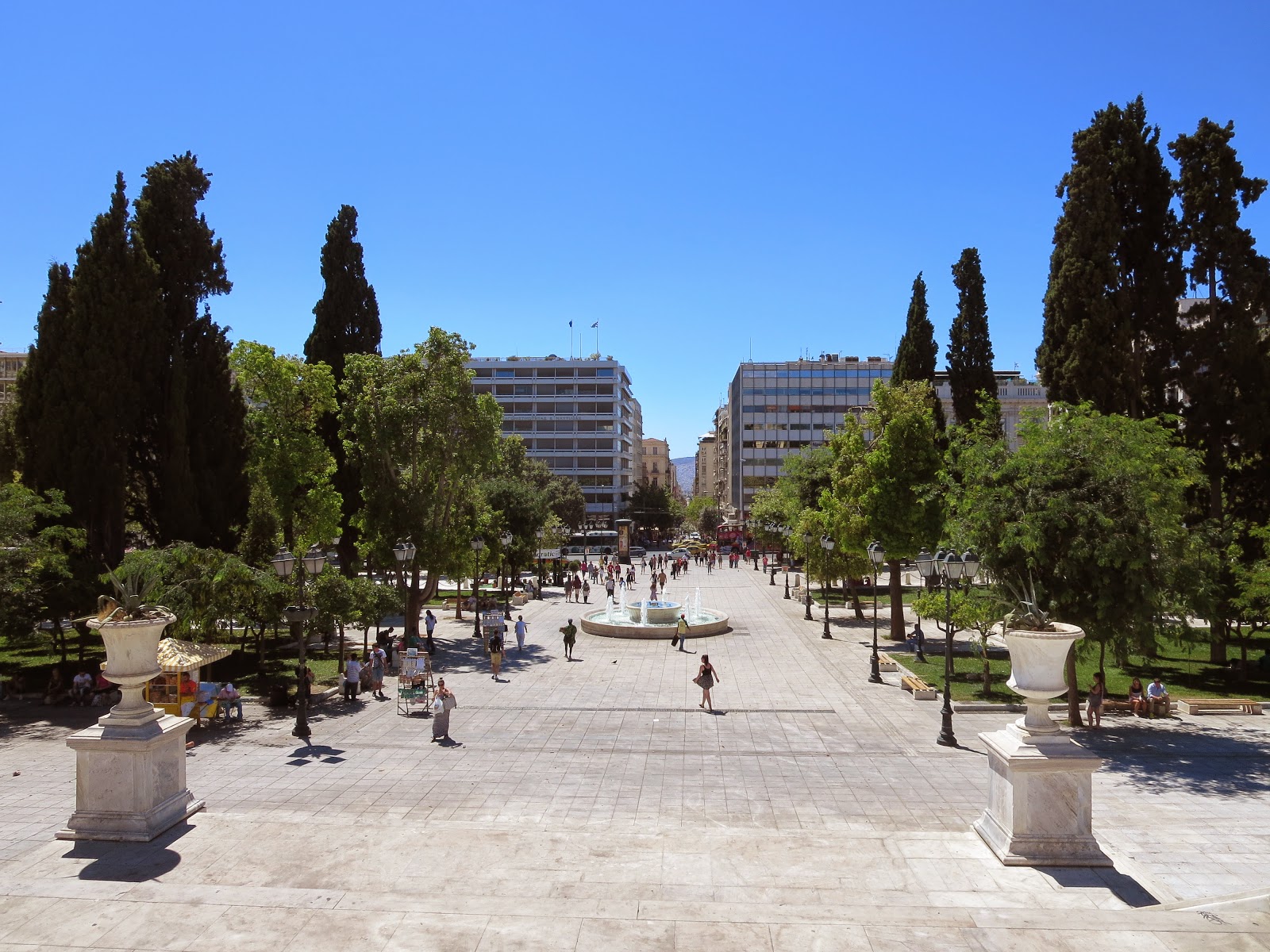 From here we could see some of the 8 hills that are part of the city, including Filopappou Hill (aka ‘Hill of the Muses’) and Lykavittos Hill (the highest of the hills) which give greats views over the city, if you have time to hike up them, which unfortunately we didn’t.

Next up was a shady wander through the National Gardens…

…before arriving at the Panathenaic Stadium. This stadium was built in 4th century BC for athletic competitions and even hosted the first modern Olympic Games in 1896 (after some restoration).

Then we found ourselves at the ruins of the Temple of the Olympian Zeus. Started in 6th century BC, this is Greece’s largest temple, featuring 17m high Corinthian columns and took over 700 years to build.

Between the temple and the Acropolis hill is Hadrian’s Arch (Emperor Hadrian being the man in charge of the temple’s completion in AD131).

Final stop on our touristy day was the large Theatre of Dionysos on the side of the Acropolis Hill.

There is a €12 ticket you can buy in Athens which is valid for four days and gives you entry to the Acropolis, Ancient Agora, Roman Agora, Keramikos, Temple of Olympian Zeus and the Theatre of Dionysos.

After a hot and intense sightseeing session we walked through the markets, heading back to Plateia Monastiraki...

...for frozen Greek yoghurt with caramelised figs. Perfect location as we had the Acropolis and Parthenon looking down at us.

Back to the hotel for showers where I changed into bright blue in honour of our Greek location to celebrate our last night of holiday.  We headed out for dinner in Monastiraki at a bustling restaurant. 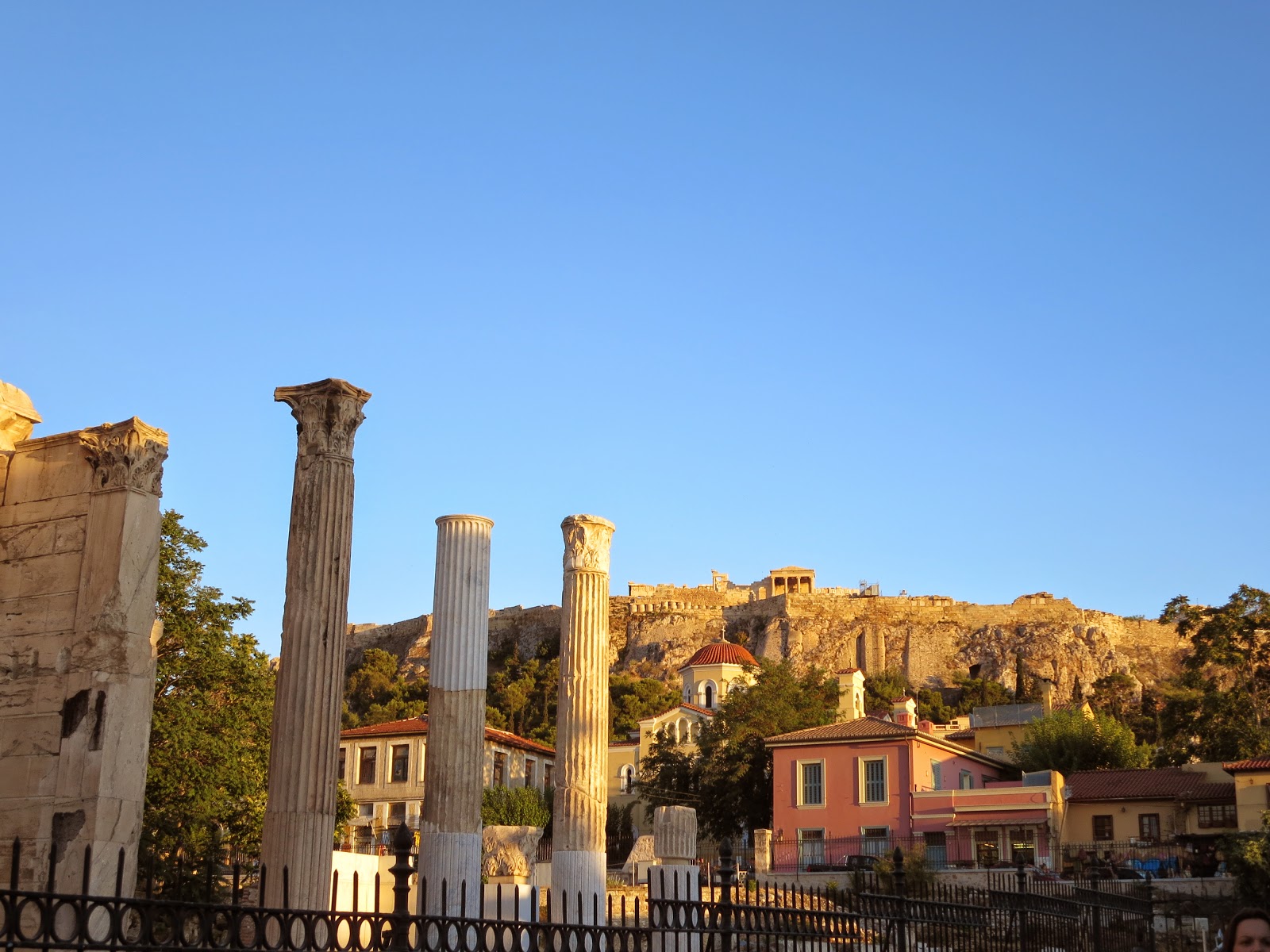 Armed with a Greek ‘must eat’ list we proceeded to order a feast of food!

Kicking off the meal with local white wine and olive tapenade as our mezeh (the generic term for small portions of Greek munchies, served hot or cold)… 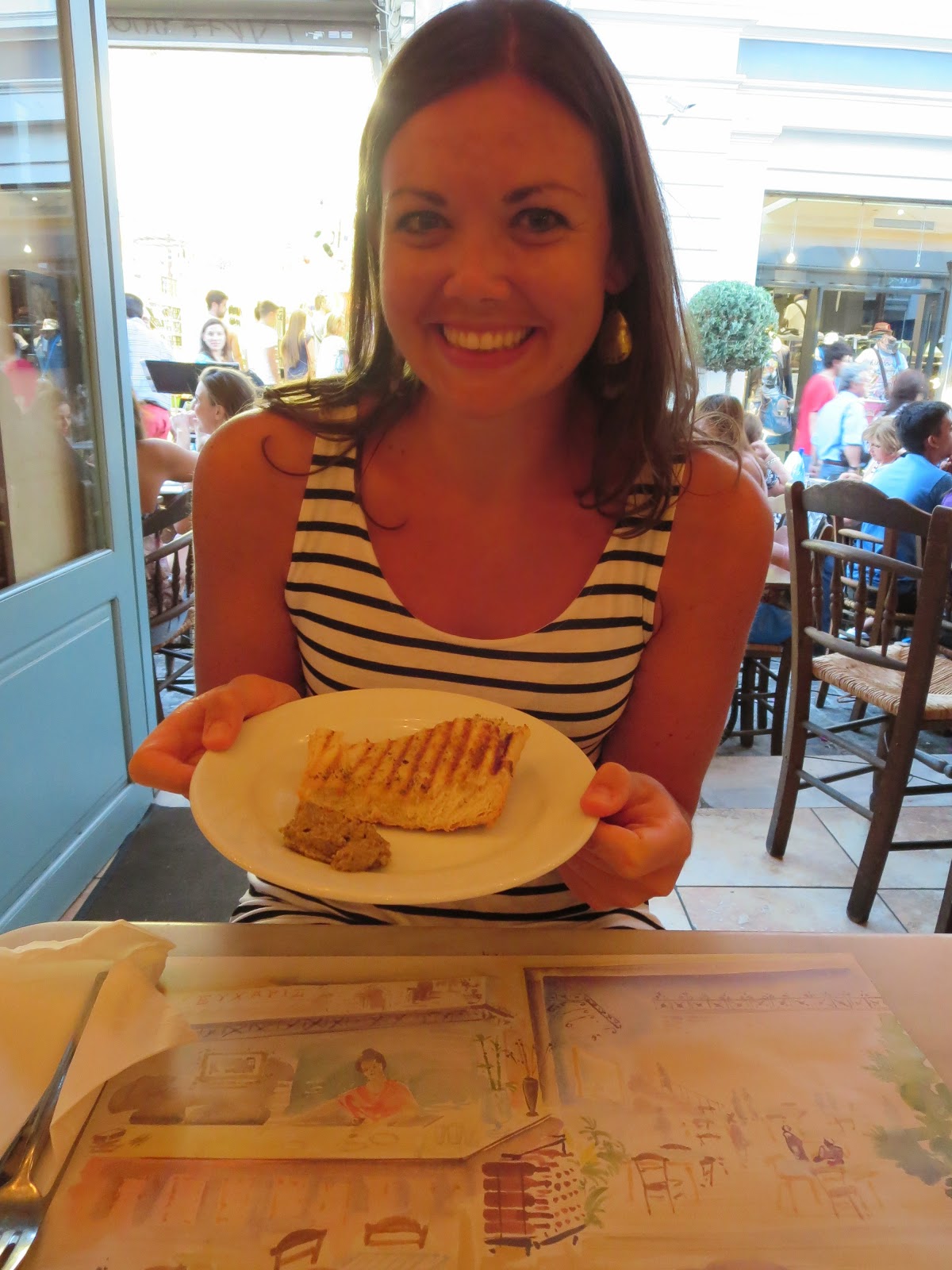 Greek white wine to started, before... 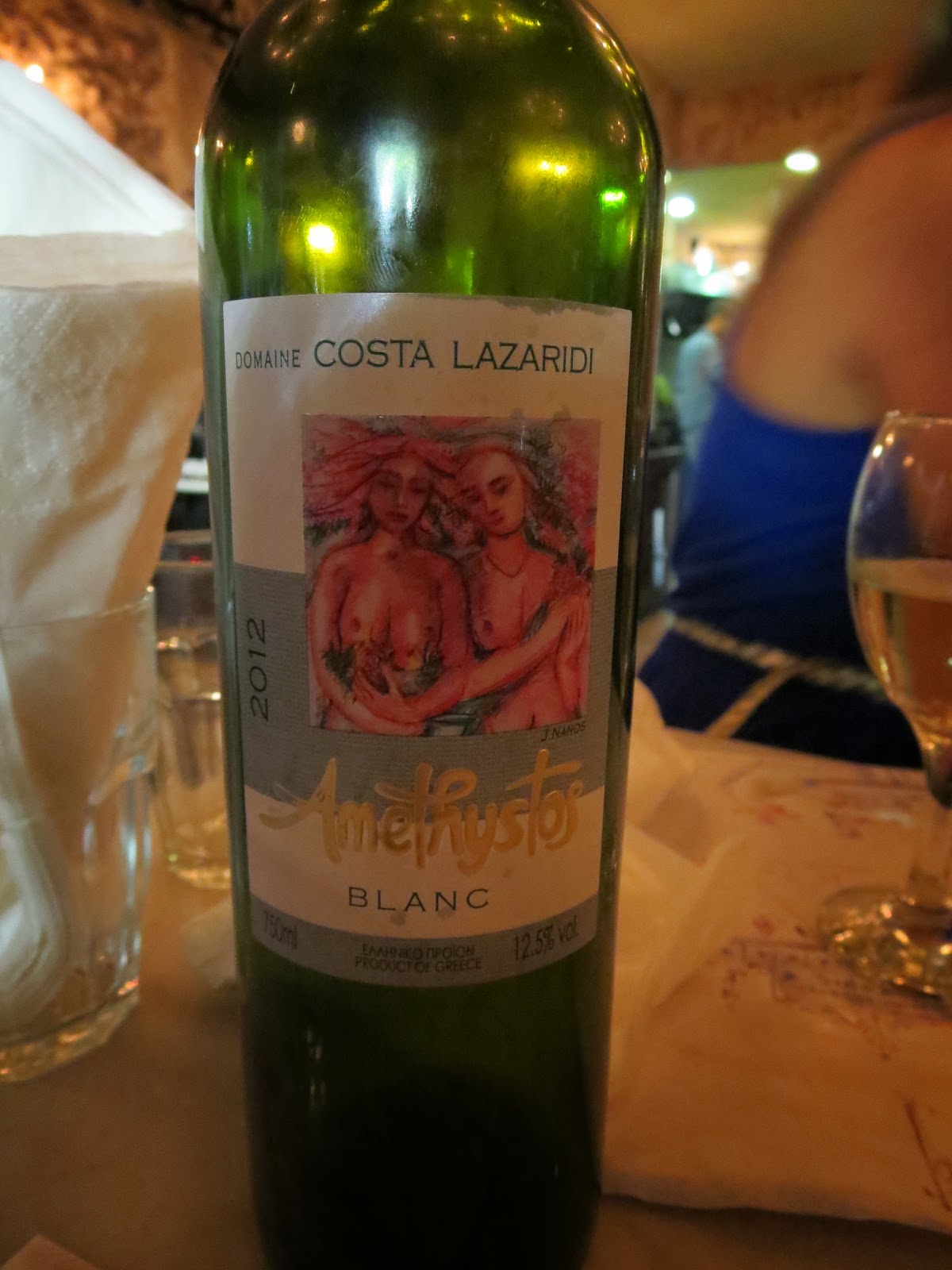 …we moved onto fava beans (boiled and mixed with olive oil, lemon and onion into a hummus-style dip) - honestly they tasted a bit nothingy.

Next up was Yemista / Gemista - tomato and pepper stuffed with rice, herbs and raisins, beautifully oven-baked.

There was kalamaki (the Athenian version of souvlaki - grilled meats, sprinkled with oregano, lemon and salt) plus keftedes (meatballs), chicken fillet, pork sausages, pork steaks all served with a mound of fried potatoes and salad!
We ate and ate and slowly reduced the piles of food in front of us - all delicious and we eagerly jumped from dish to dish.

When we thought we could eat no more, the waiter then brought us a piece of almond cake to finish us off!

In need of moving to counteract our indulgent meat-feast we headed out for a walk through Athens’ night markets.

We were also treated to a stunning view of the Acropolis lit up at night and the well-preserved Temple of Hephaestus.

Drinks-time and we sought out Masticha (a Greek after-dinner digestive, made from mastic - a Mediterranean tree resin - into a flavourful liquor native to Chios island).

It was served in a little jug, accompanied by shot glasses and a small jug of water. It was sweet and syrupy and we happily sipped our drink as the lively streets filled with performers and people. 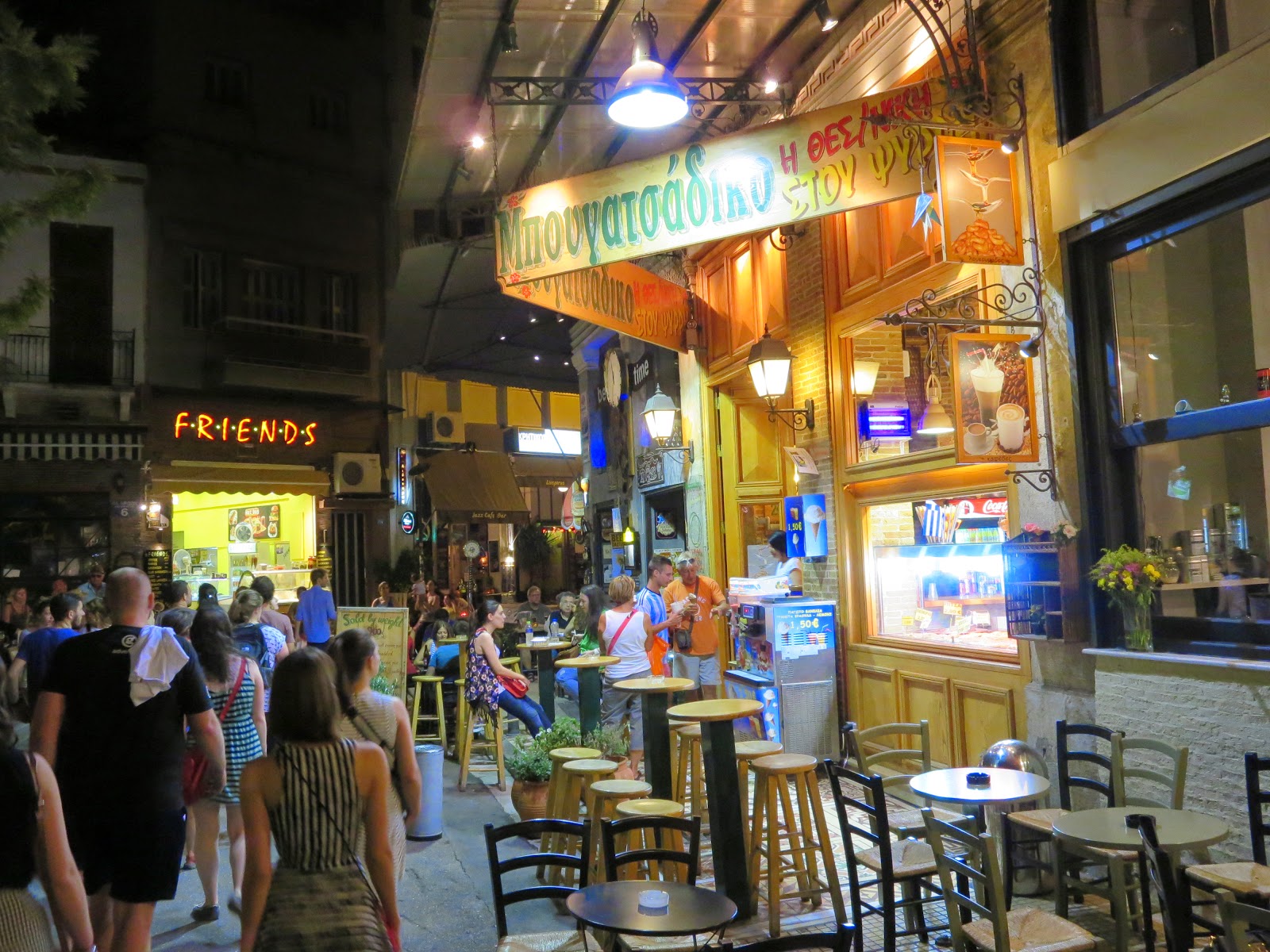 There was just time for a quick honey rakia shot before bed!