Salzburg in the sunshine

Posted by The Hungry Traveller on 13:34 in Germany Travel | Comments : 0

I was feeling very fortunate after my weekend trip back to England as it was another short work week in Germany. On Thursday (19 June) it was another bank holiday, meaning most people also don't work on the Friday...bring on a 4 day weekend! This time the bank holiday was for 'Feast of Corpus Christi', a religious holiday 60 days after Easter Sunday "celebrating the tradition and belief in the body and blood of Jesus Christ" (thanks, wikipedia!)

As a non-religious person, it gave me another opportunity to do some local exploration...this time I chose to head to Salzburg in Austria. Less than 2 hours drive from Munich, Salzburg is the 4th largest city in Austria and has an impressive and well-preserved old town. It was also the birthplace of Mozart in the 18th century and the location for parts of ‘The Sound of Music’ movie.

Salzburg is a tourist hotspot so I got there early! Parking is limited within the old city, but I got a place at the large underground sites right in the centre and headed right out to explore…

Heading straight to the highlight - Hohensalzburg Castle / Fortress (“Festung Hohensalzburg”) which is one of the largest castles in Europe and overlooks the old city, providing a perfect orientation landmark for those who suffer from no sense of direction, like myself!

On the way, I came across the Salzburg Cathedral (“Salzburg Dom”) - a large baroque church that Mozart was baptised in. In front of the cathedral is a large statue of the Virgin Mary in front which is in the centre of a square hosting Salzburg’s largest Christmas market. 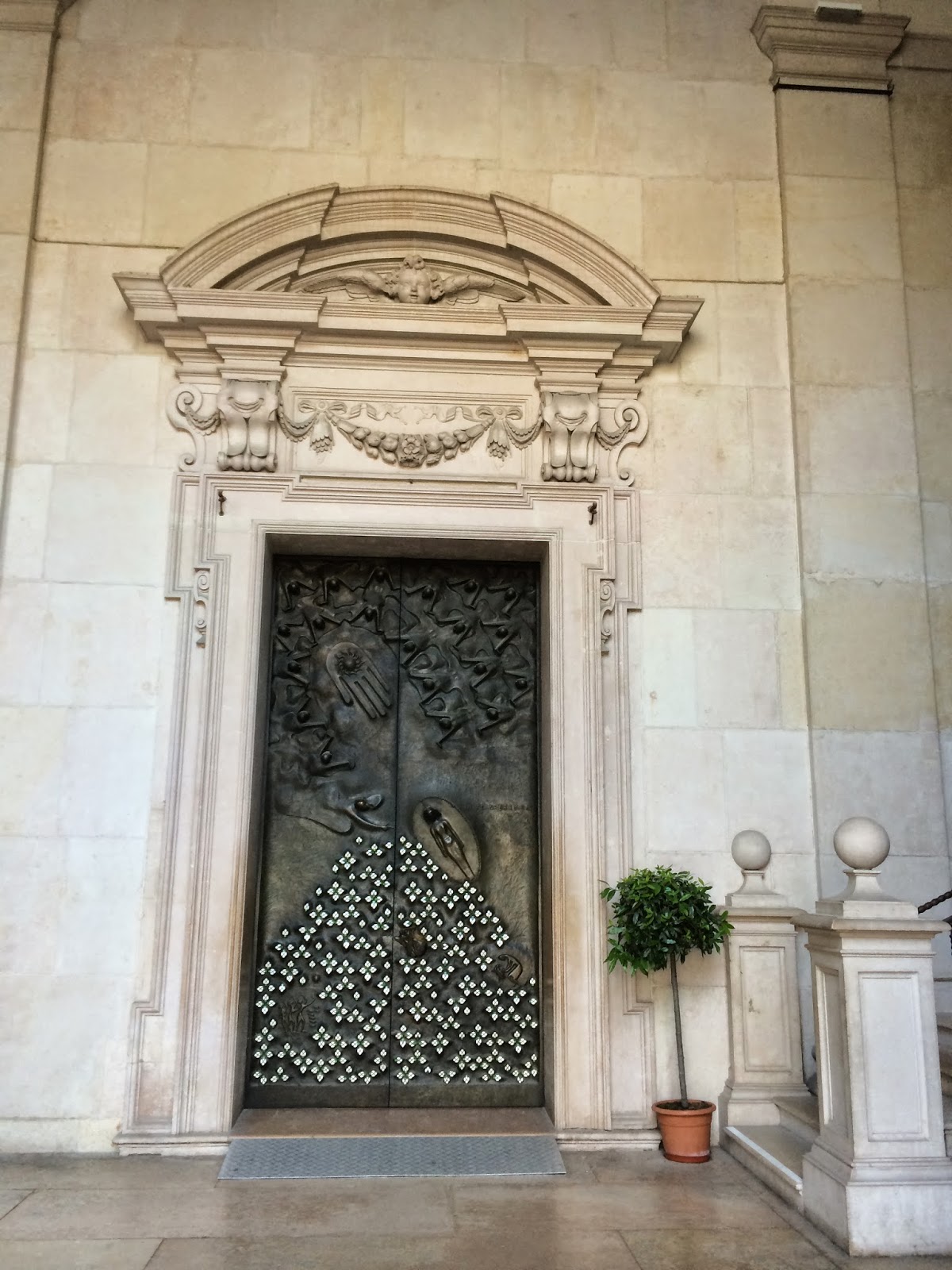 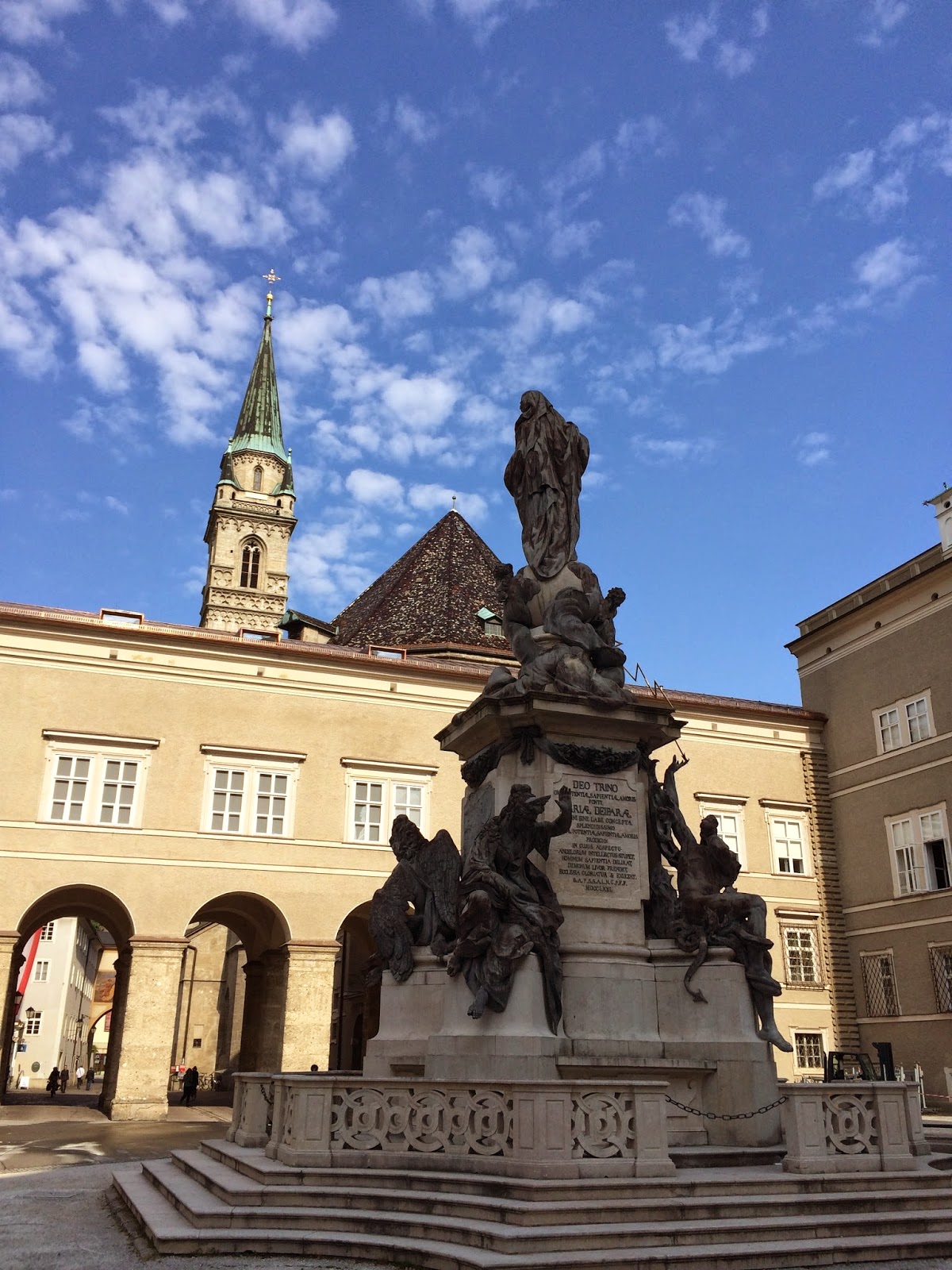 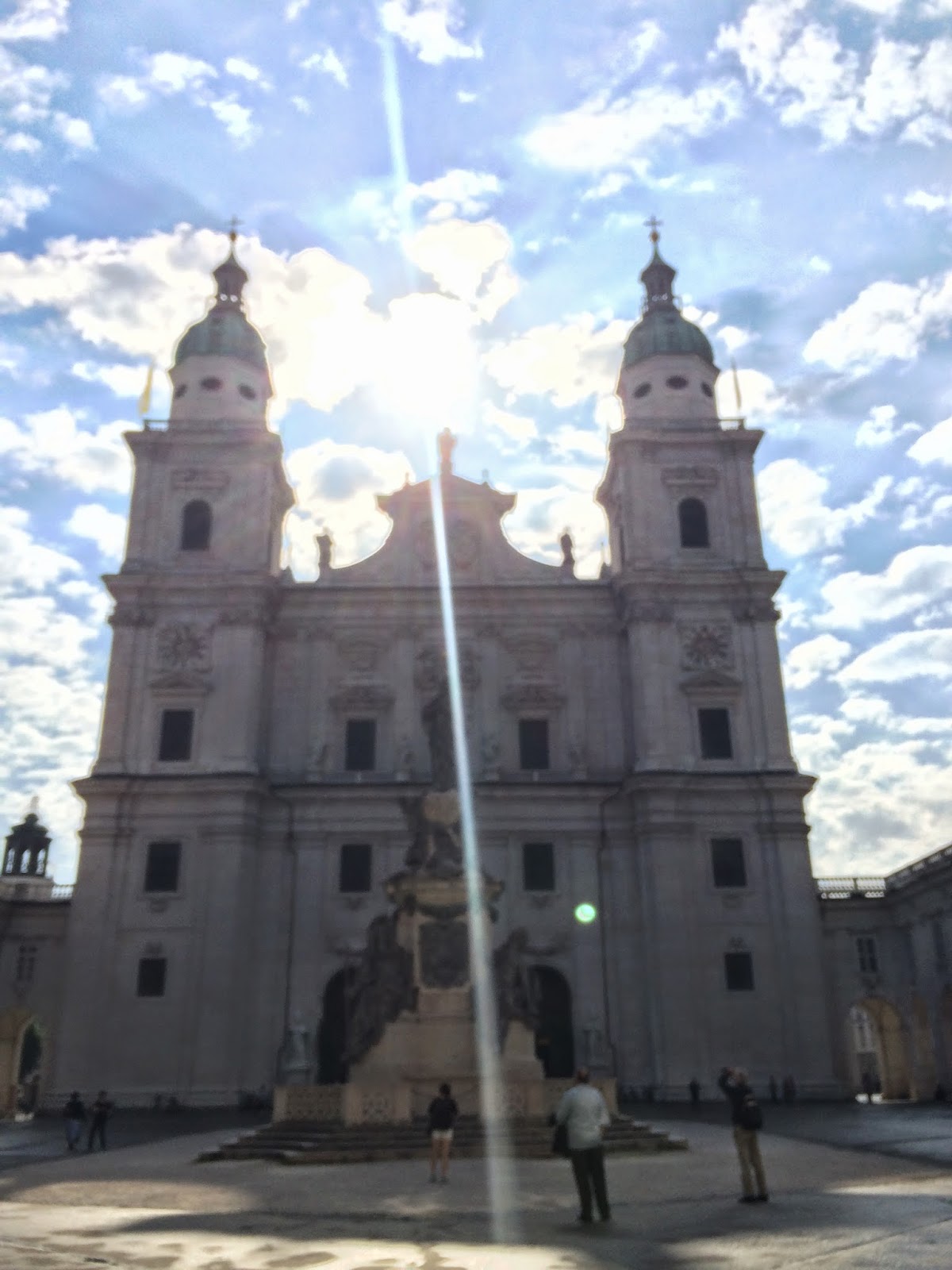 Walking on, I found myself in Kapitalplatz, a large square with some random accessories! Firstly a giant chess set and secondly a 30-foot golden ball with a man on top - locally called “Mann auf Mozartkugel”. 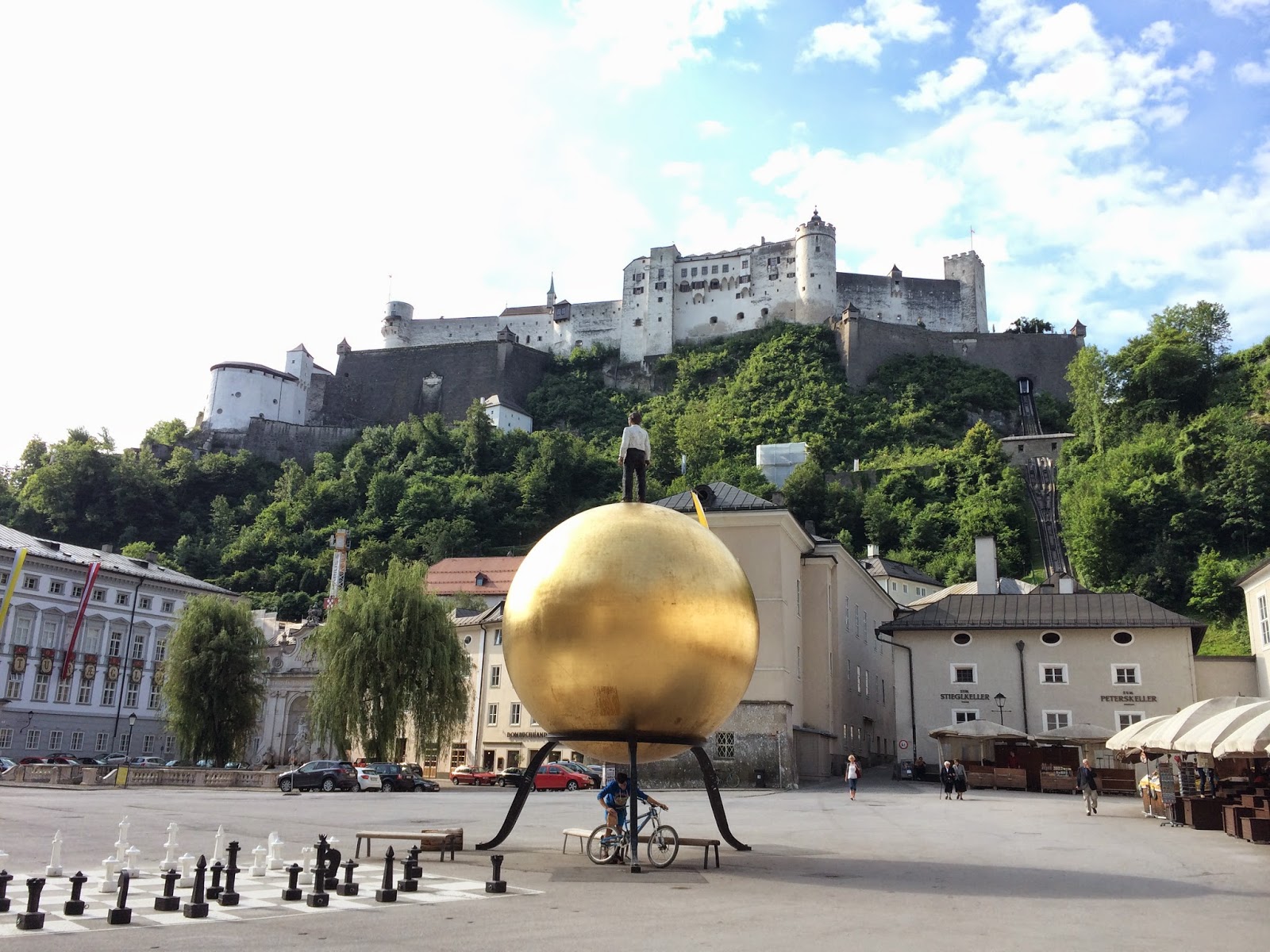 Continuing on, I arrived at a medieval horse bath (“Kapitalschwemme”) from 1732. 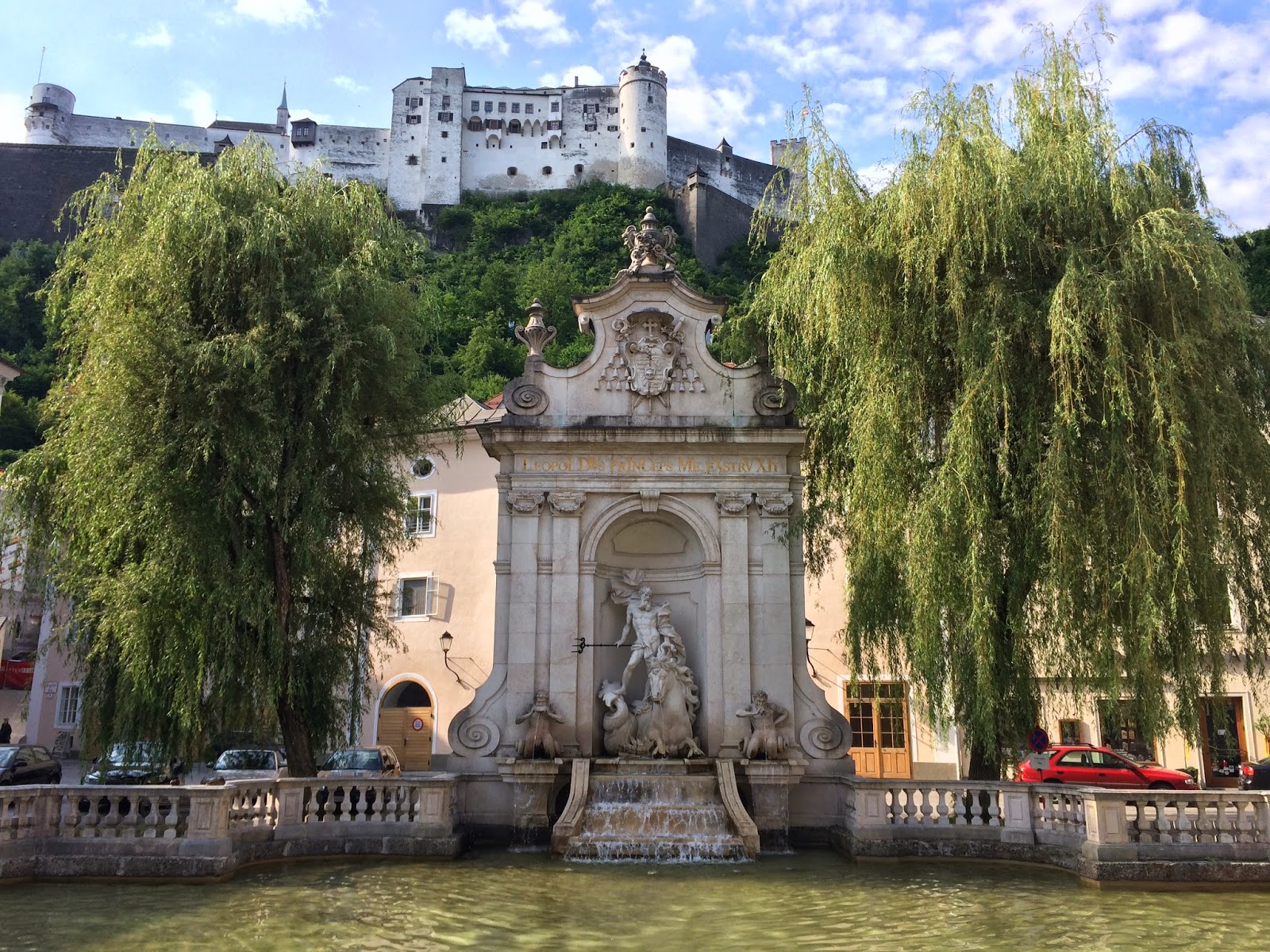 Now it was time to hike up to the fortress. I opted for a steep uphill walk, but there is a rail option - the Funicular (“Festungsbahn”) - the oldest operating railway in the world. 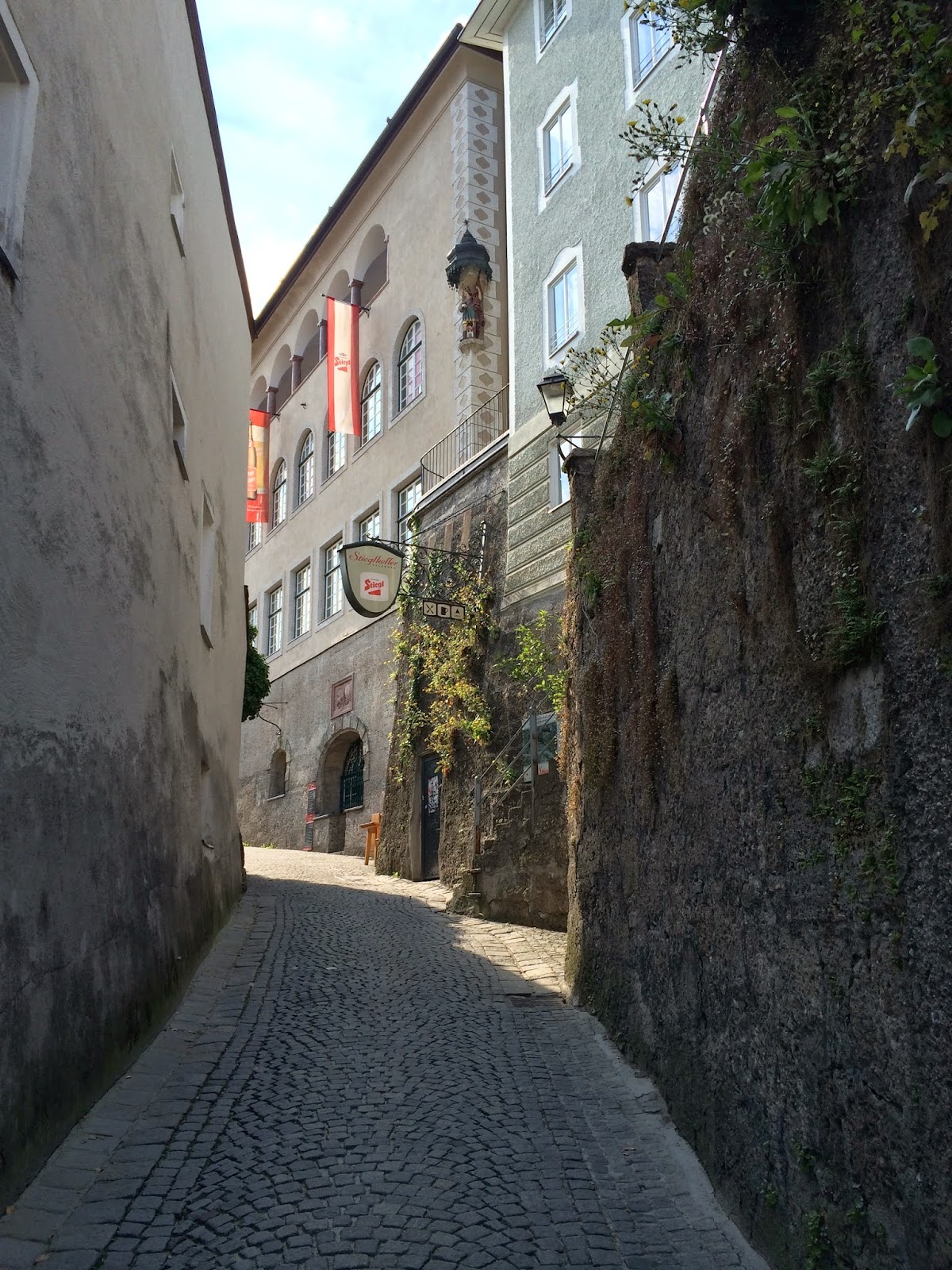 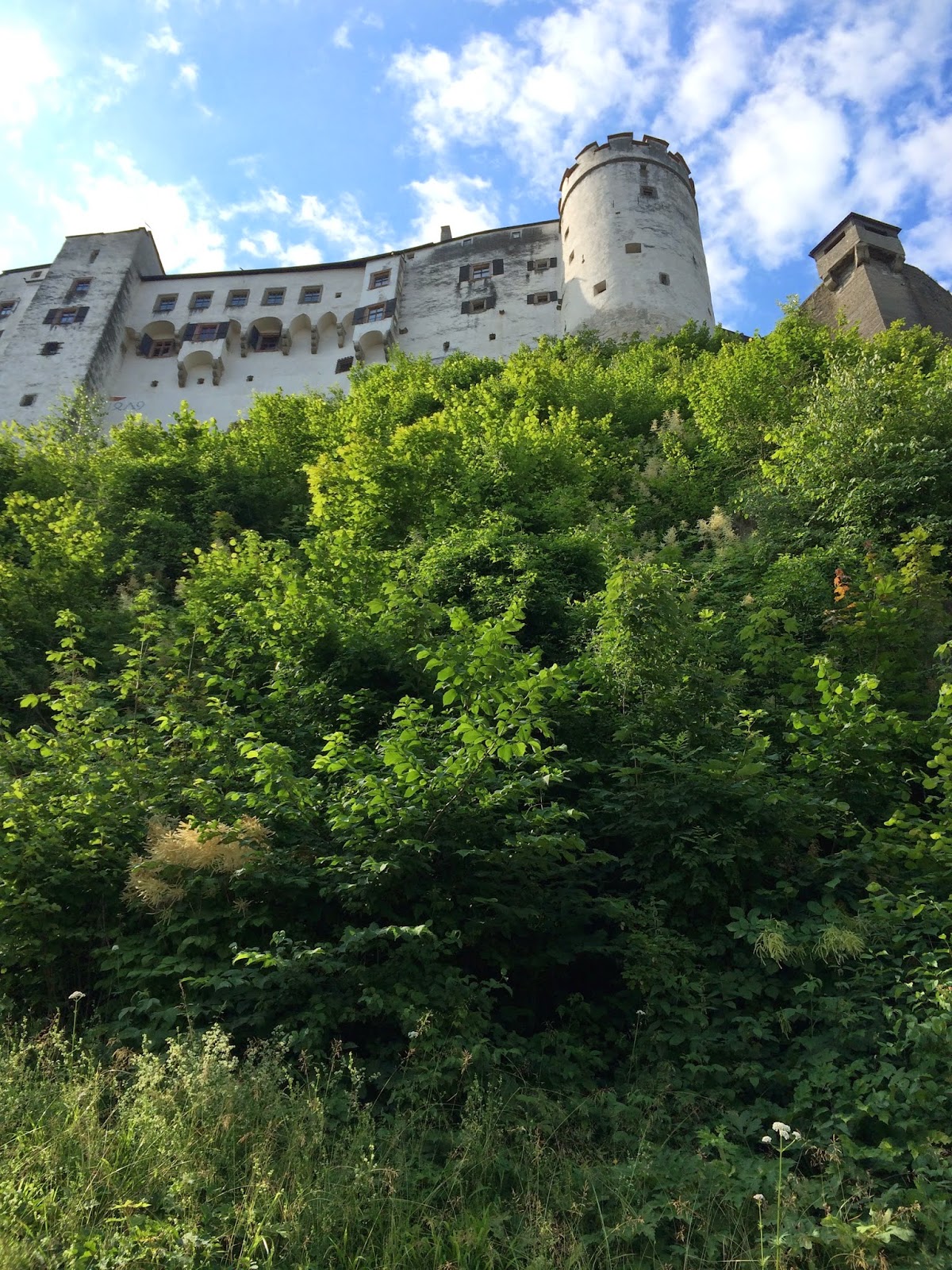 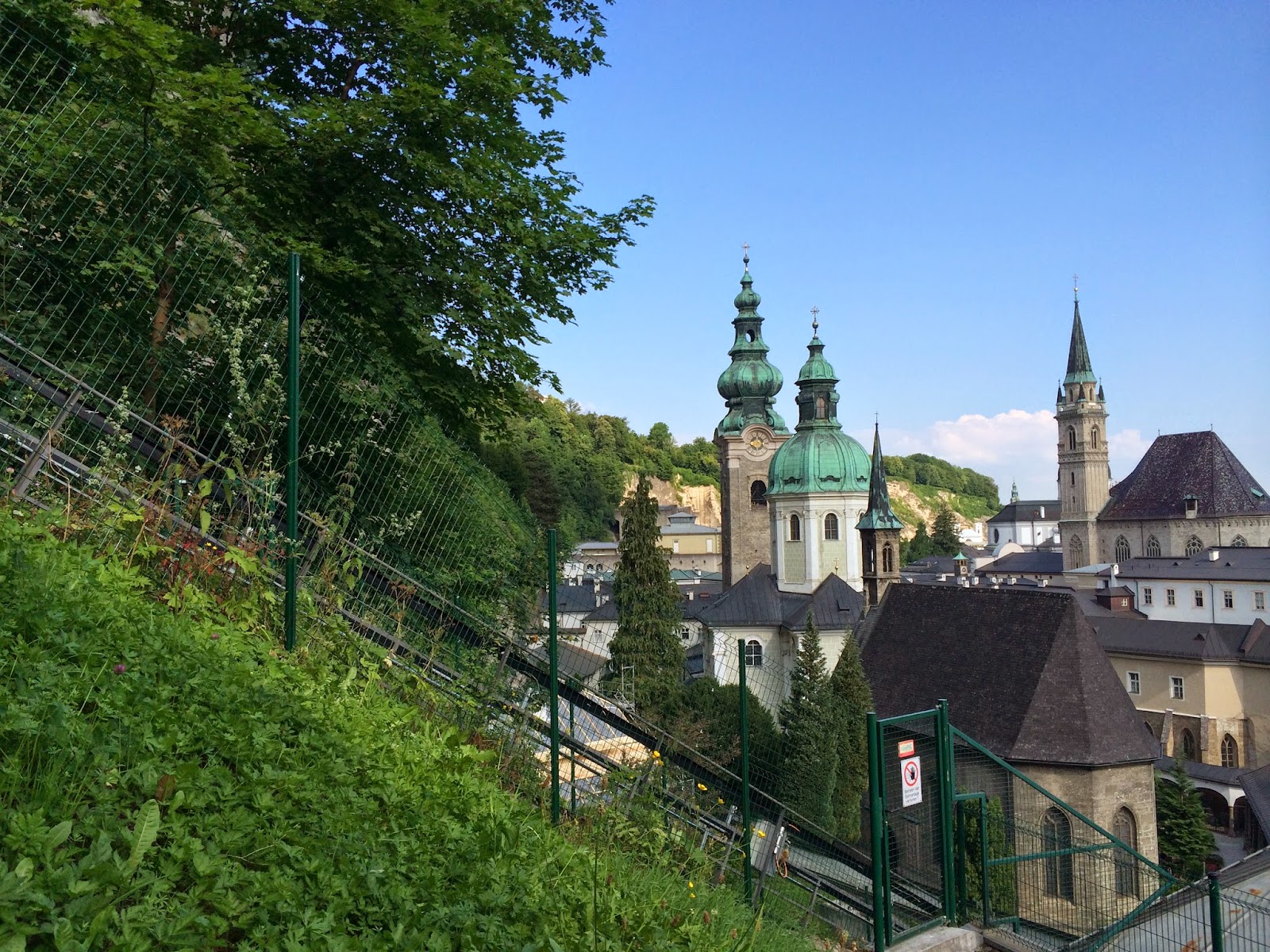 The High Salzburg Fortress has been in place since 1077AD towering over the city from Mönchstein Hill. It was expanded in 1500AD making it one of the largest in Europe and Salzburg’s main tourist attraction. Fortunately as I was early, there were relatively few people around as I wandered through the fortress. 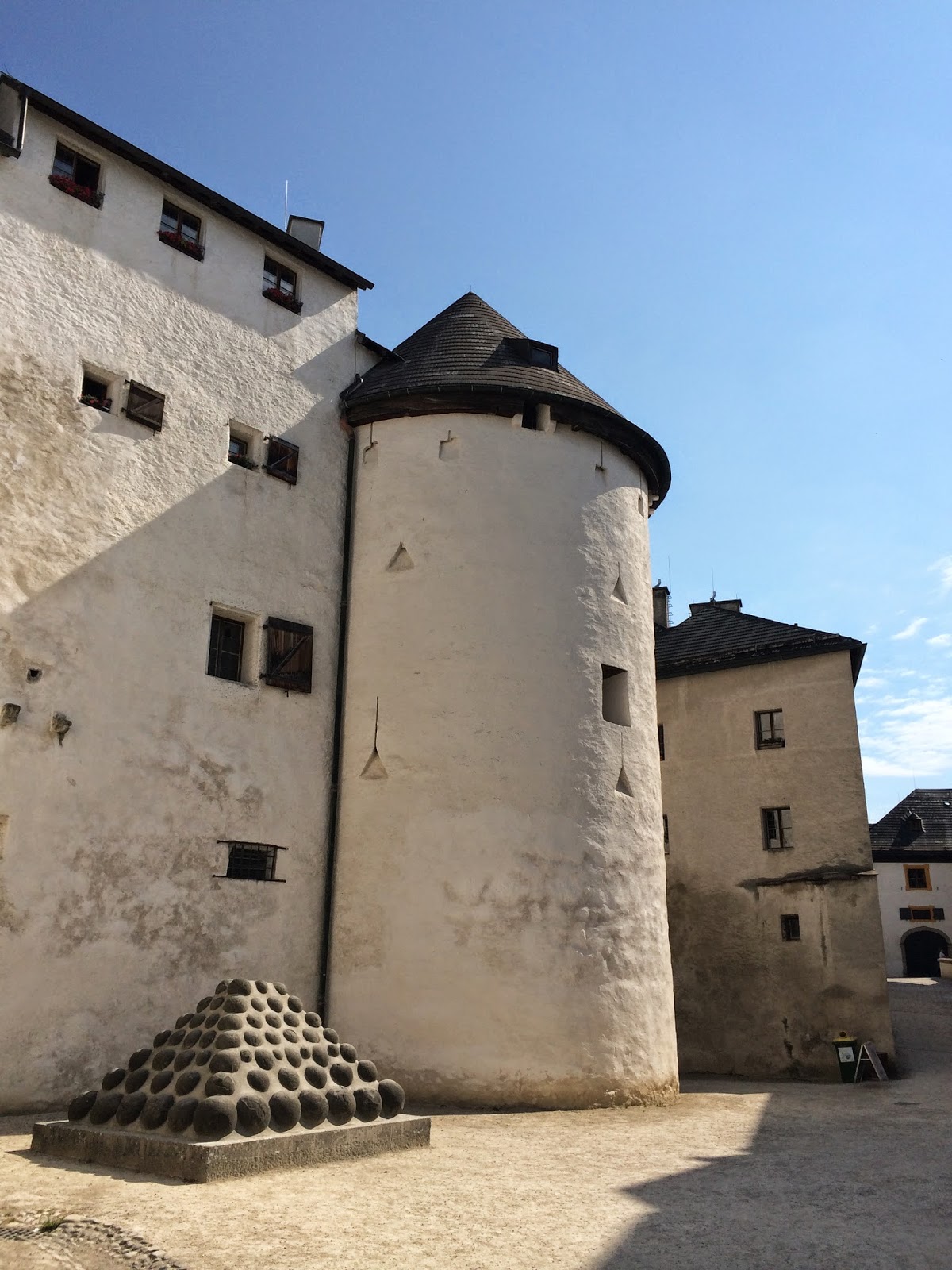 Admiring the impressive views over the city and the River Salzach…

…as well as the dramatic Alps backdrop, including Untersberg mountain.

There is also a fortress museum, but more interestingly, there the Medieval Prince Apartments - particularly the Golden Fortress Room. 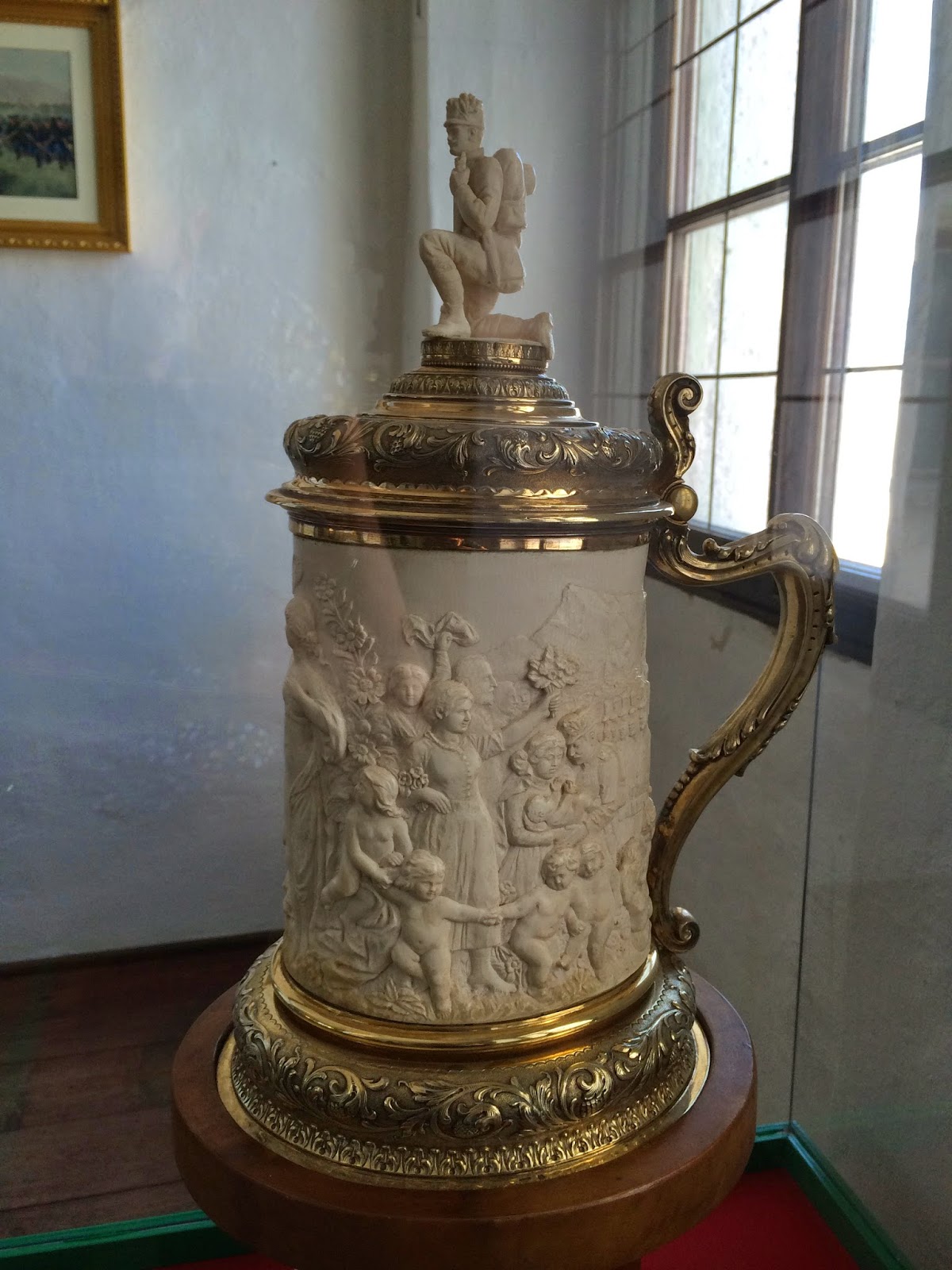 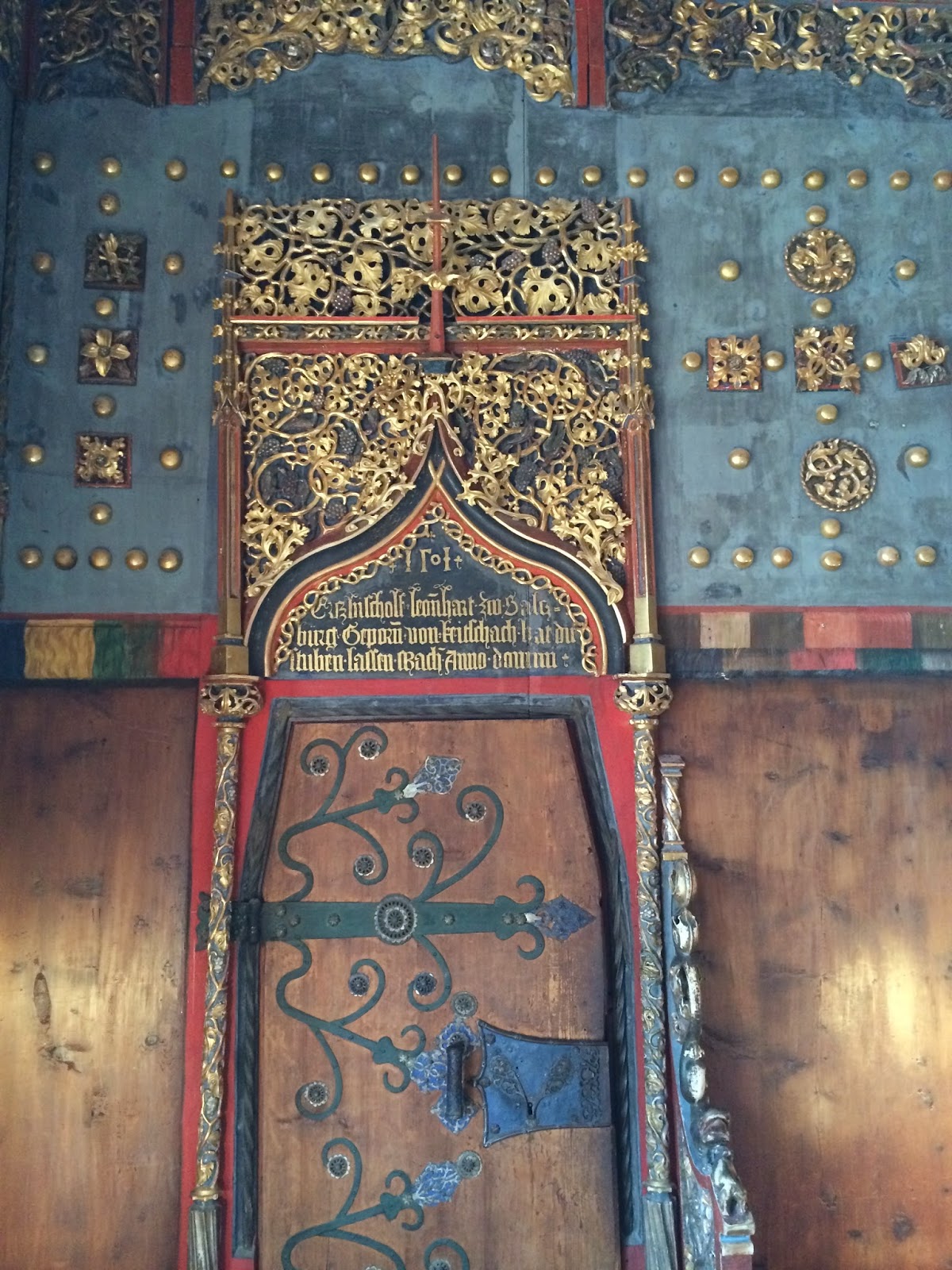 After soaking up the views, I continued along the hill-top to a view point facing the city from the other side, showing the fortress looking down on Salzburg.  Walking through the medieval city walls ("burgerwehr").

Unfortunately it was at this point that my iPhone decided to refuse to work so there are no more pictures from me for the rest of the blog, just a few from wikipedia to illustrate!

I continued onto the Salzburg Modern Museum to it’s cafe which had been recommended to me - M32.

I grabbed a table in the sunshine, giving me perfect views of the city and fortress. The morning’s trek had given me an appetite so I settled down for a “vital frühstuck” - a ‘breakfast’ consisting of apple & carrot juice, coffee, bread, cottage cheese, muesli, carrot cake, veggie sticks and yoghurt with apple & honey!

Not only does M32 have great views, but the restaurant also has some really cool decor - particularly their ceiling!

Refueled, I headed back down into the town. I walked along Getreidegasse, one of the oldest streets in Salzburg and also the main shopping street. Due to the bank holiday, the only stores that were open were tourist shops but there were still loads of people wandering through this compact road. The highlight is the shop signs - because in the middles ages most people couldn’t read, the store owners illustrated their wares using icons - a tradition continued today. 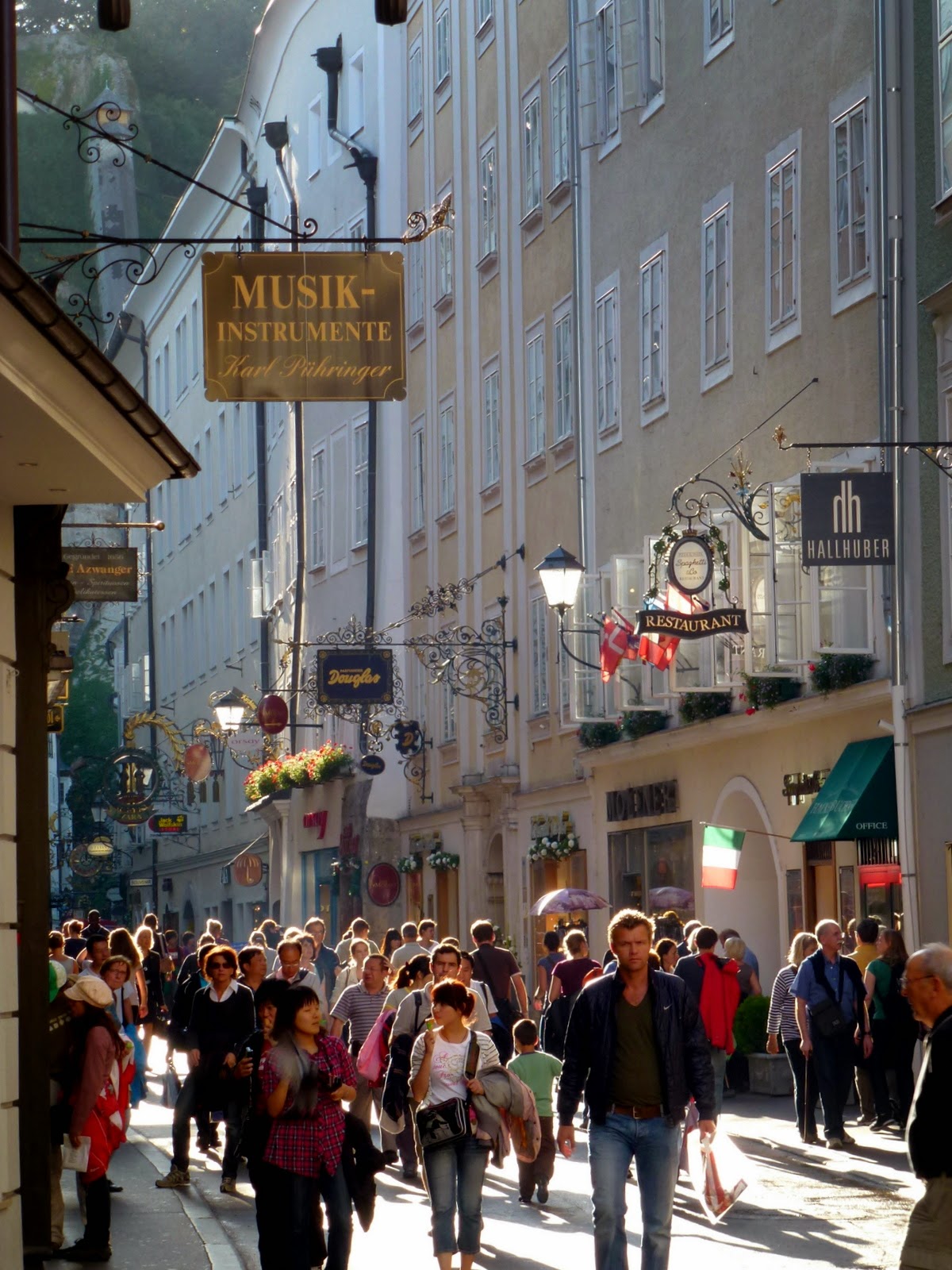 On this same road is Mozart’s birth place (“Geburtshaus”) - on 27 January 1756 Wolfgang Amadeus Mozart was born here. The building stands out due to it’s bright yellow colour (and hundreds of tourists in front). 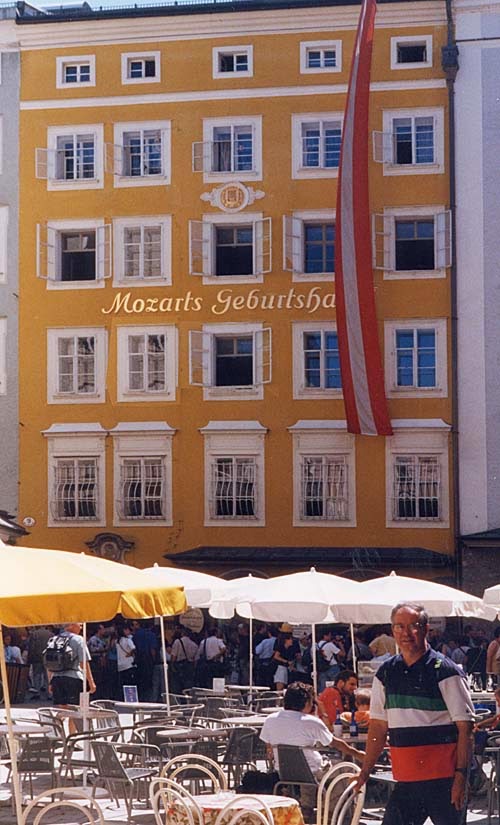 Walking through Mozart Square (“Mozartplatz”), featuring a large statue of the man himself and overlooked by the pink Church of St.Michael. 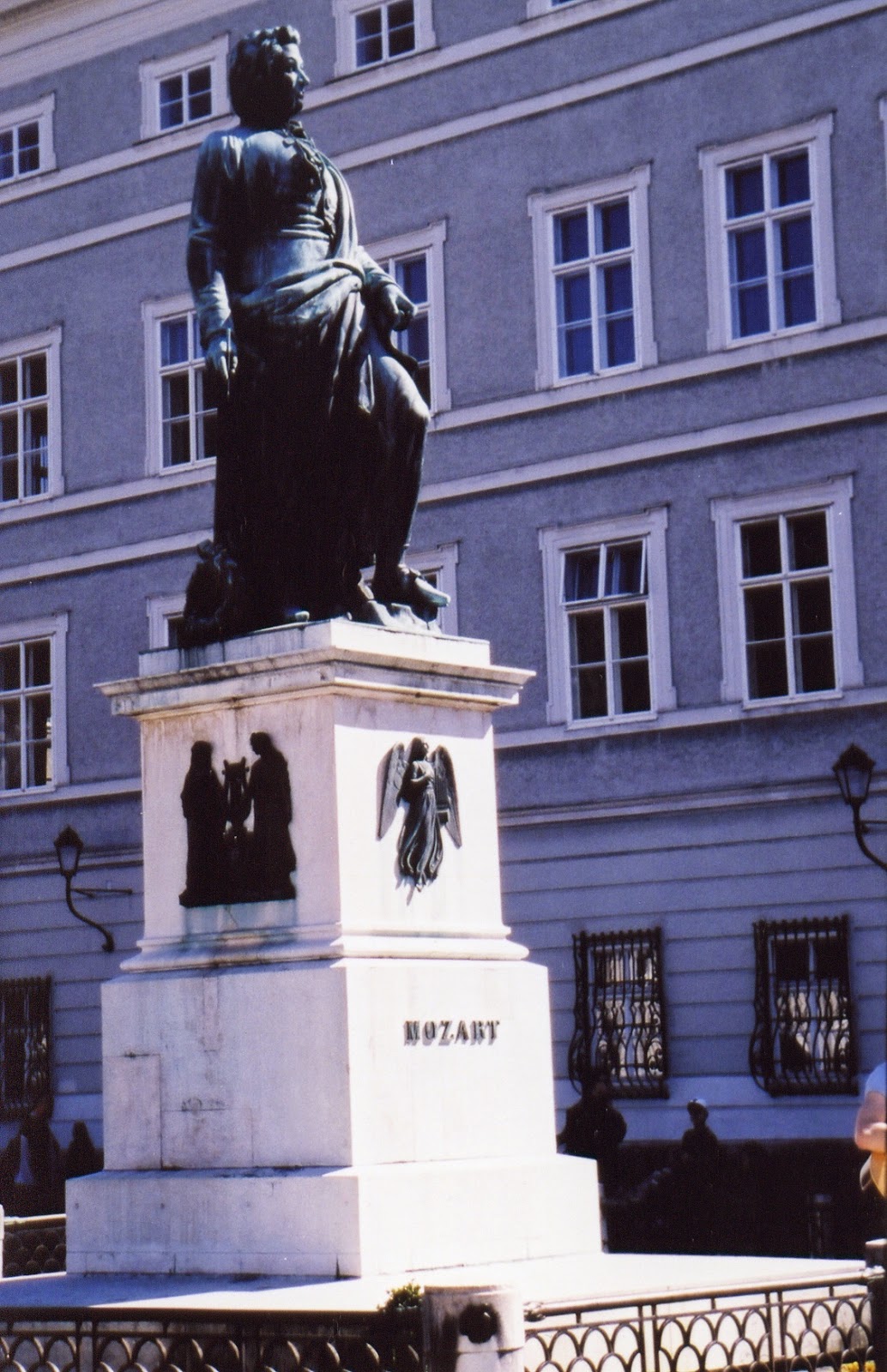 From the church, I headed to Residenz Square & Fountain (“Residenzplatz” & “Residenzbrunnen”) on the site of a former ancient Roman Forum.

From here I found myself at Steingasse - a very narrow medieval street which used to be the only road reaching from the north of the Alps to Venice, Italy. This old cobblestone street has lots of charming doorways - previously home to some of the rich and powerful residents. Including Joseph Mohr (lyricalist of “Silent Night”).

Next up was the Mirabell Palace Gardens (the site where the Von Trap children sing “do re mi”) where I wandered through the impressive statues, fountain and hedge maze. Being across from the river you are also treated to more great views of the fortress. 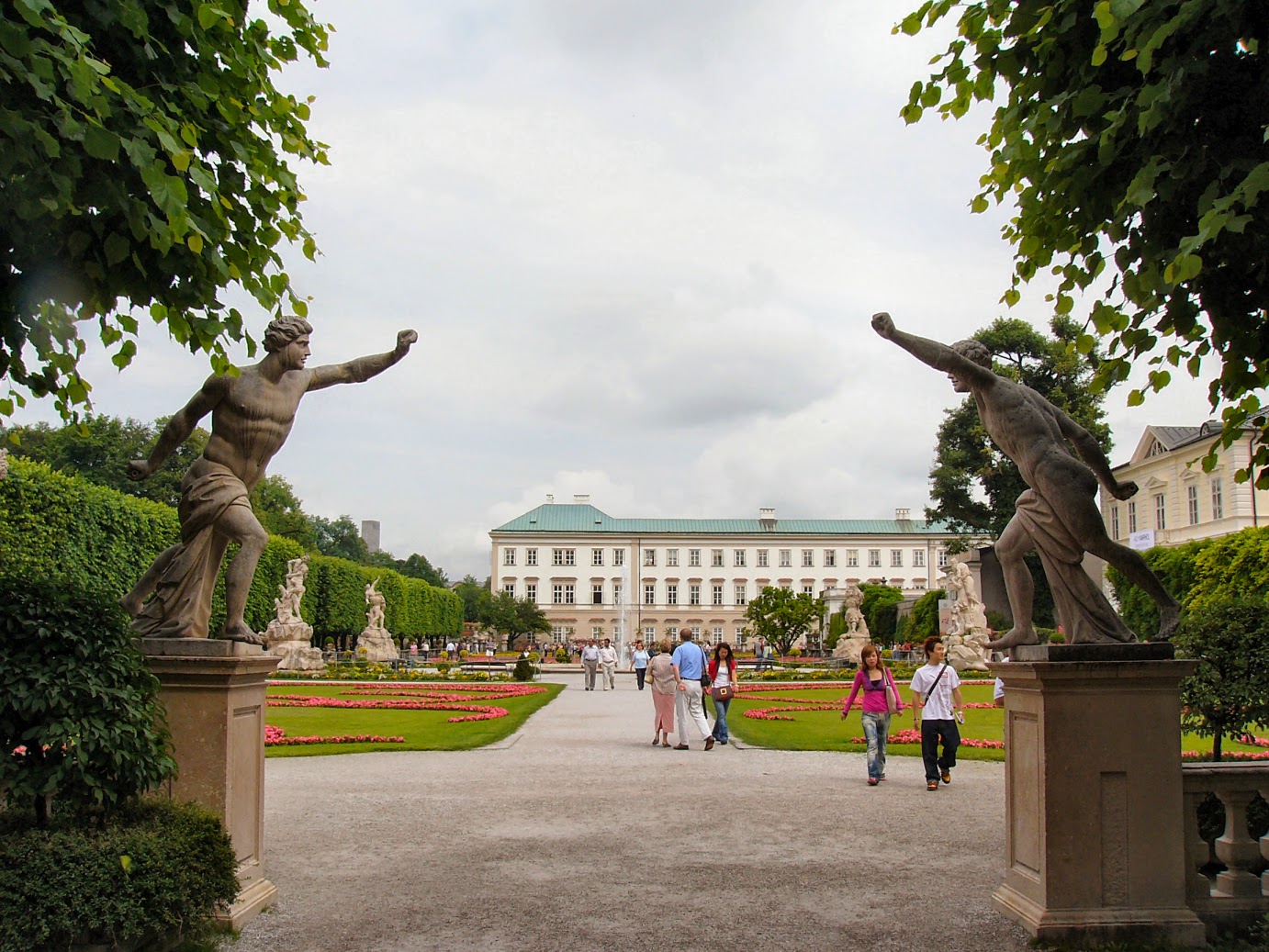 Leaving the palace gardens, I headed to Mozart’s residence (“Wohnhaus”) which is where Mozart grew up until 1781 when he moved to Vienna, following an argument with the Archbishop.

Walking past Hotel Sacher (home to the infamous chocolate Sacher Torte), I instead opted for an ice-cream from one of the many vendors along the Salzach River. I walked over the Mozart foot bridge (“Mozartsteg”) where people have covered large parts with love-locks.

I continued to wander through the old city, enjoying the sunshine. My final tourist destination was St.Peter’s cemetery (“Petersfriedhof”) - a unique cemetery filled with flowers and ancient headstones. The interesting thing about this cemetery is that rather than buy your burial plot, you rent it. Your family has to pay every 10 years or you get thrown out!

Before heading back to Munich, I stopped for coffee at Carpe Diem, right in the heart of the old town and is a definite recommendation…the menu looked amazing and I’ll definitely be going back for that alone!