Posted by The Hungry Traveller on 18:31 in Germany Travel | Comments : 0

There’s an important part of German history that they’re not proud of, but determined not to forget - their role in WWII. On a bank holiday weekend, I decided to visit the concentration camp in Dachau, just 40 mins drive from Munich.

Dachau was the first Nazi concentration camp (in German “Konzentrationslager” / KZ) opened in Germany to hold political prisoners. It was set up by Heinruch Himmler, Munich’s Chief of Police on the site of an gunpowder factory in 1933 and was liberated by the American military in 1945.

Having parked the car (only €3) I walked past the old SS houses.

At the entrance to the camp, there is a quotation setting the scene for the memorial site: 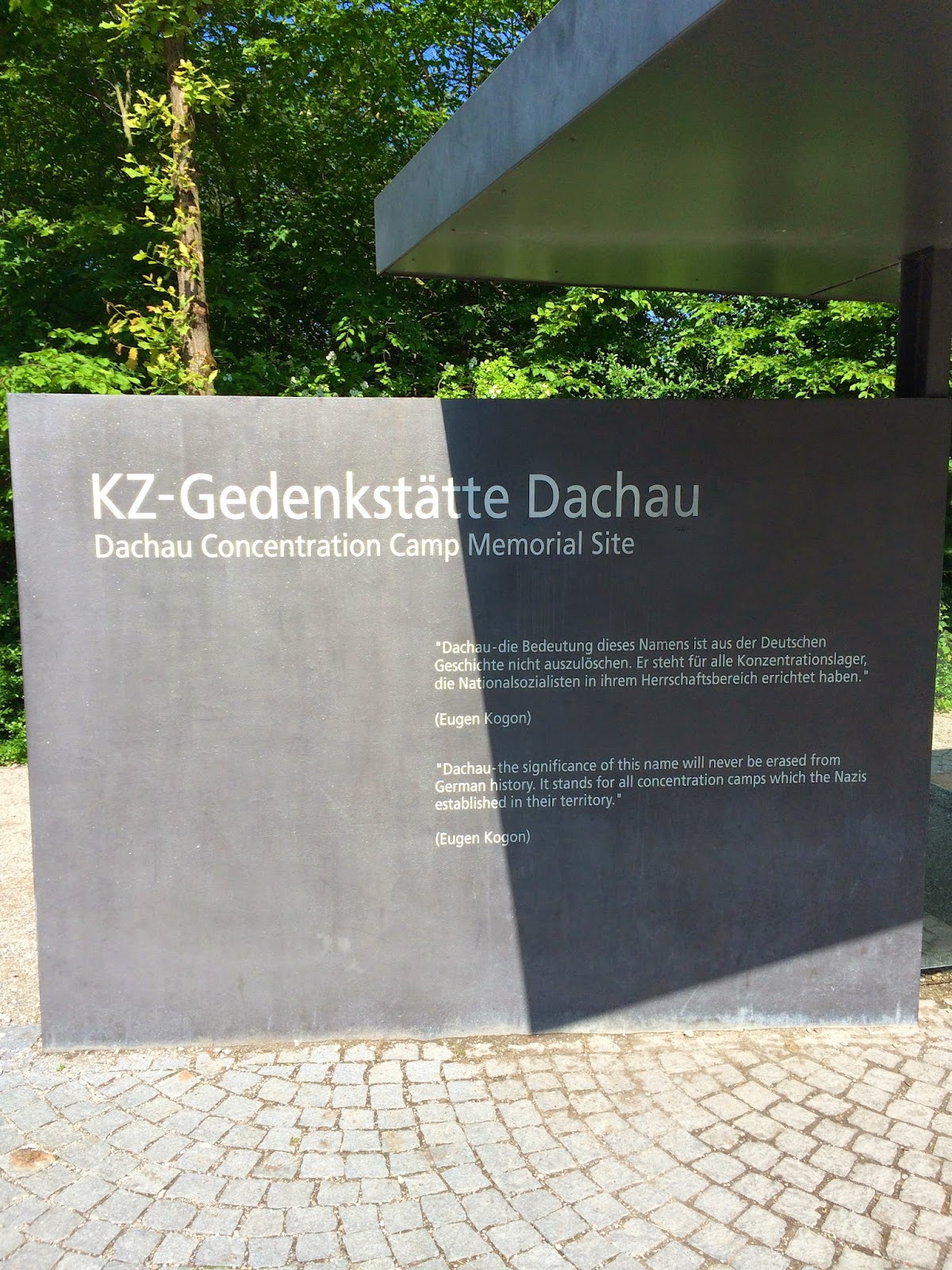 “Dachau - the significance of this name will never be erased from German history. It stands for all concentration camps which the Nazis established in their territory.”

You have two options for English guided tours: firstly, the audio tour (only €3.50) or, alternatively, a tour guide (only €3 twice a day: 11am or 1pm). I chose the tour guide because i always find it more interesting to listen to someone speak than a pre-recorded cassette - plus you can ask questions! I wasn’t disappointed - our German guide (Martina) had relatives connected to not only the German locals, but also Jewish family and someone who had been with the American military. She had a collection of uncensored private photos from this man evidencing the tragedy and disregard for human life. Whist it was a gorgeously sunny day and the memorial was well presented, looking at the haunting photos really served to illustrate the history.

A famous feature of the camp is the entrance gate with the slogan “Arbeit macht frei” (English interpretation: “Work will set you free”).

The camp was established as a forced labour camp and this expression was part of the Nazi propaganda which trivialised what actually happened at the camps. It actually was a torture camp for political prisoners, Jews, homosexuals, criminals and religious people.  Different prisoners were marked by different badges, e.g. criminals had brown badges. 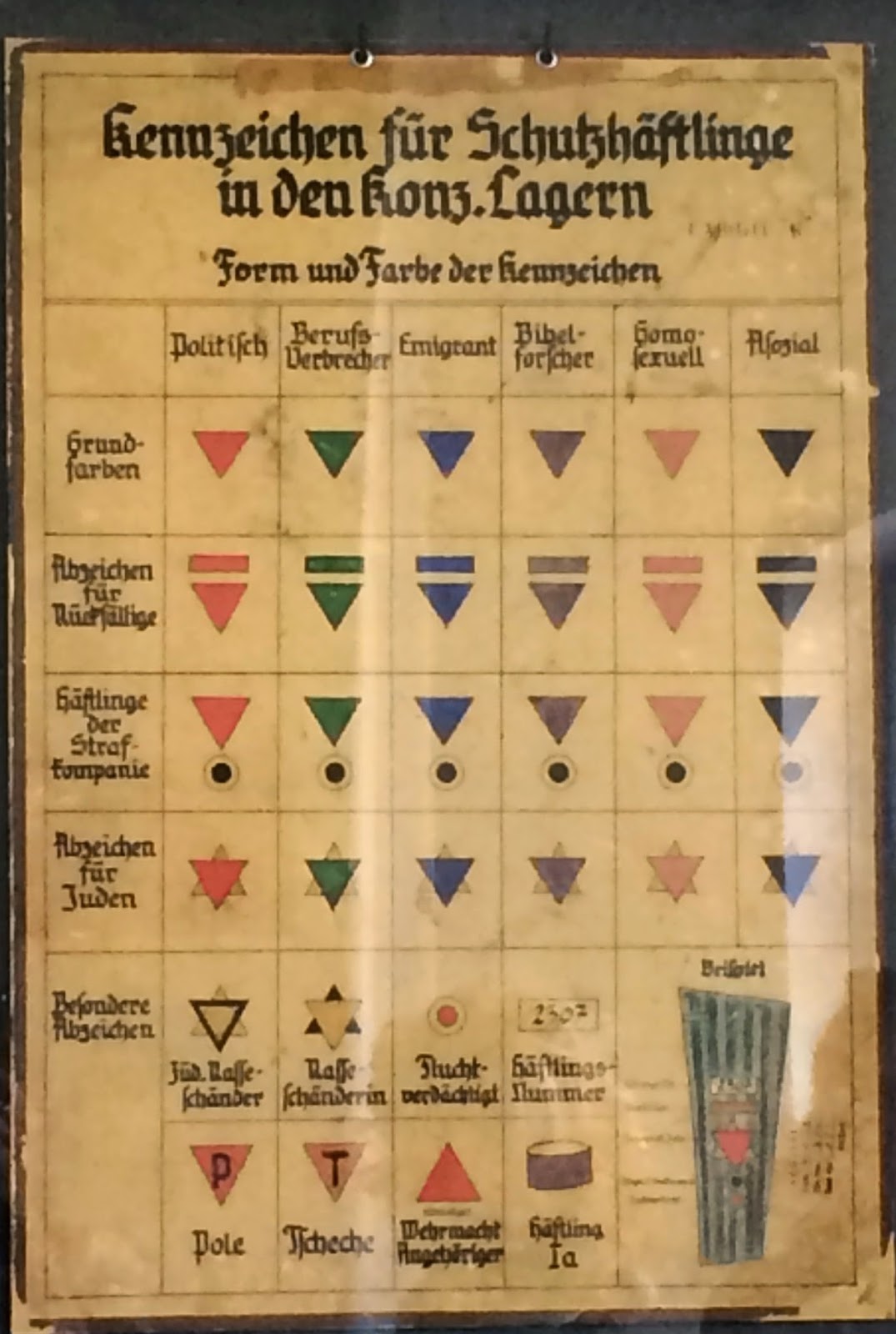 The prison was heavily guarded and armed to ensure no-one escaped. 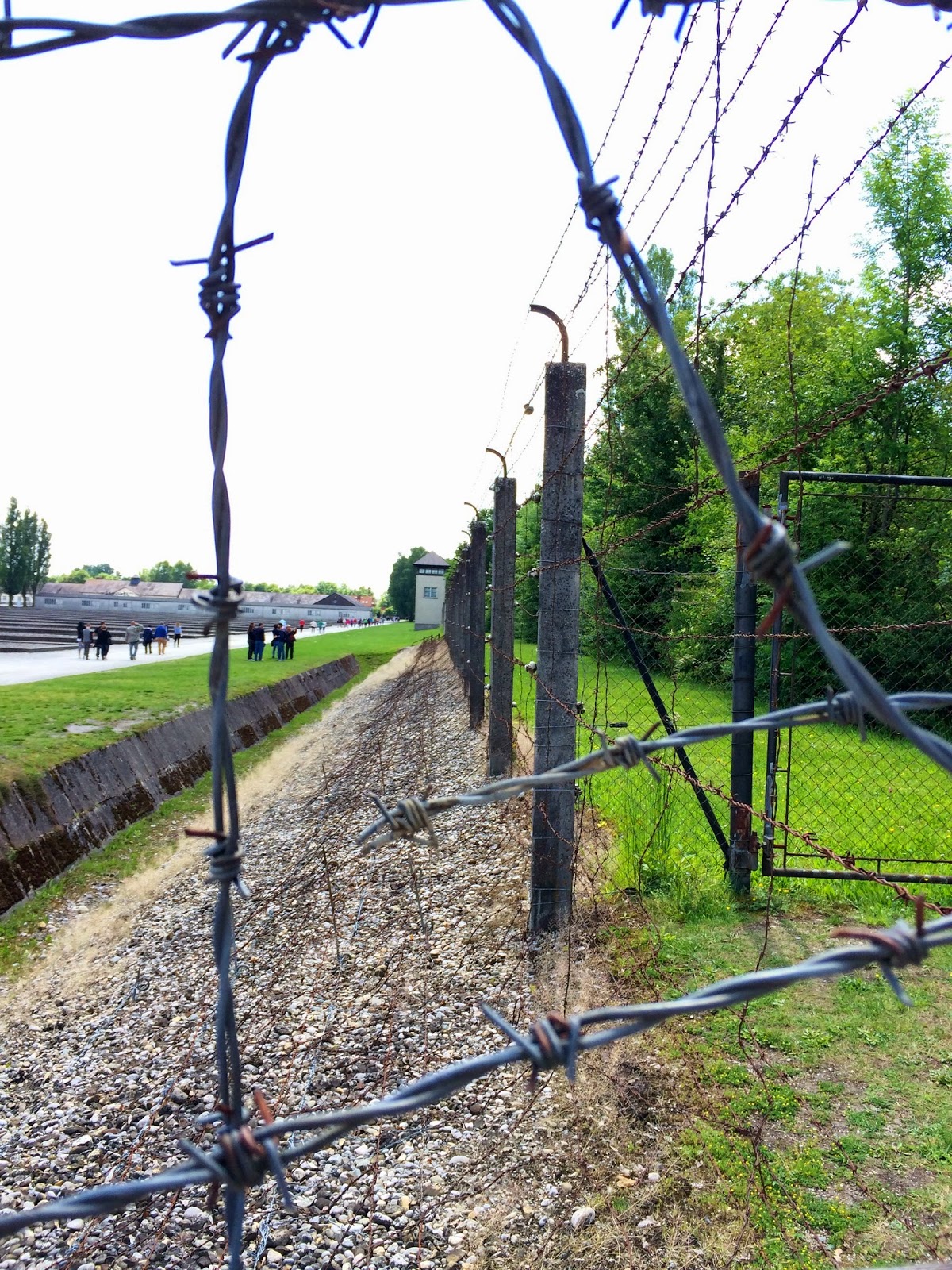 Dachau was a model and ‘training camp’ for the other Nazi concentration camps, being in operation for the majority of the Nazi regime, and whilst a number of the buildings were destroyed, parts have been restored to give the impression of the site. Over 200,000 prisoners came through Dachau, averaging 12,000 people at any one time. Approximately 42,000 people are believed to have died from / in the camp - from disease, malnutrition and suicide. When it was clear that the war was lost, Himmler gave the command that all remaining camps should be evacuated and evidence destroyed. In April 1945 over 10,000 were forced to walk from the camp - many dying in the process.

There were two main parts to the camp: the 32 barracks and the crematorium. 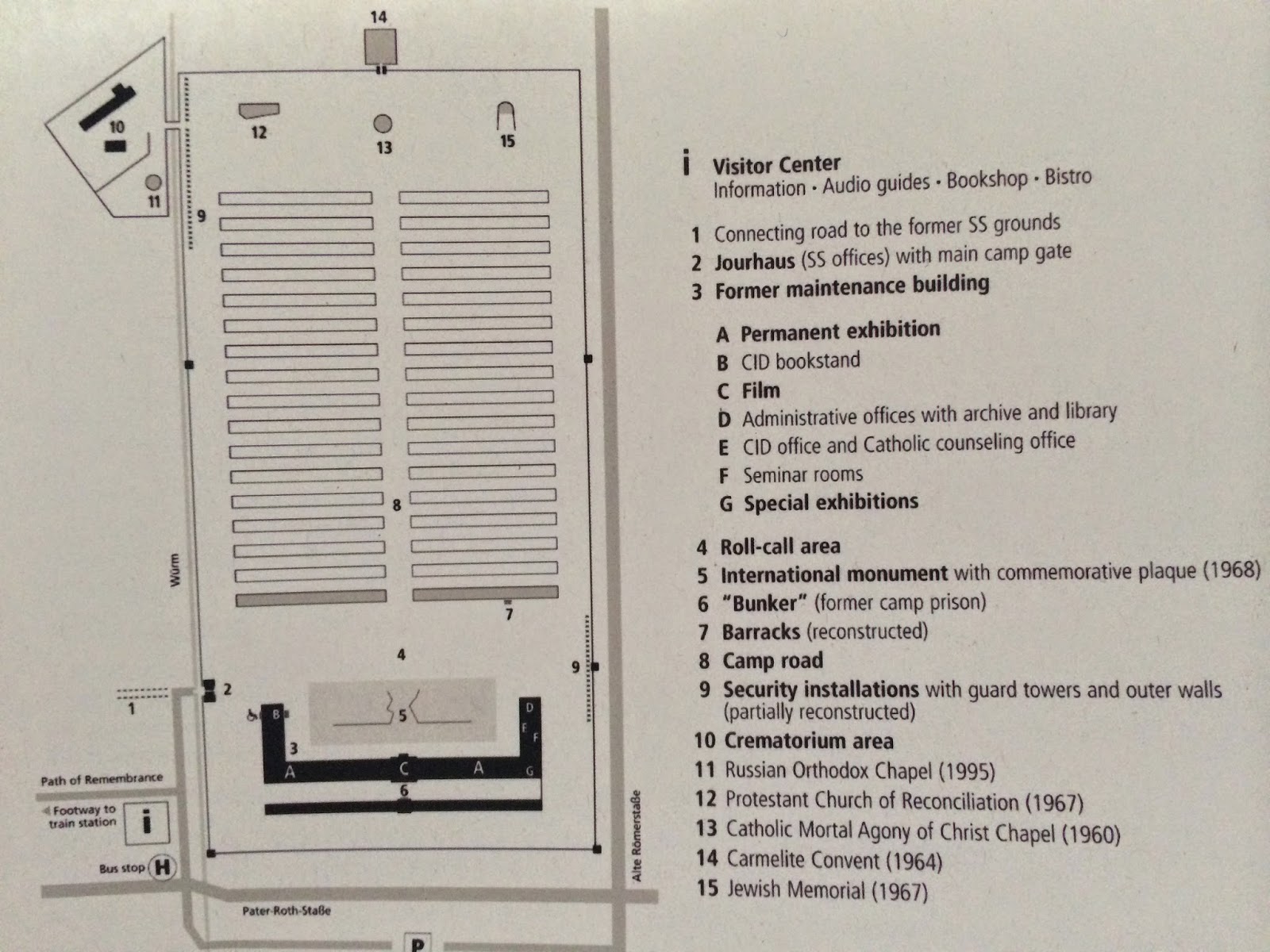 The barracks included dedicated buildings for “medical experiments” and imprisoned clergy. There is also a large courtyard where prisoner roll call and executions took place. The whole camp was surrounded by an electric barbed-wire fence, a ditch and a wall with 7 guard towers. In the middle of courtyard is a large memorial to the victims of Dachau. 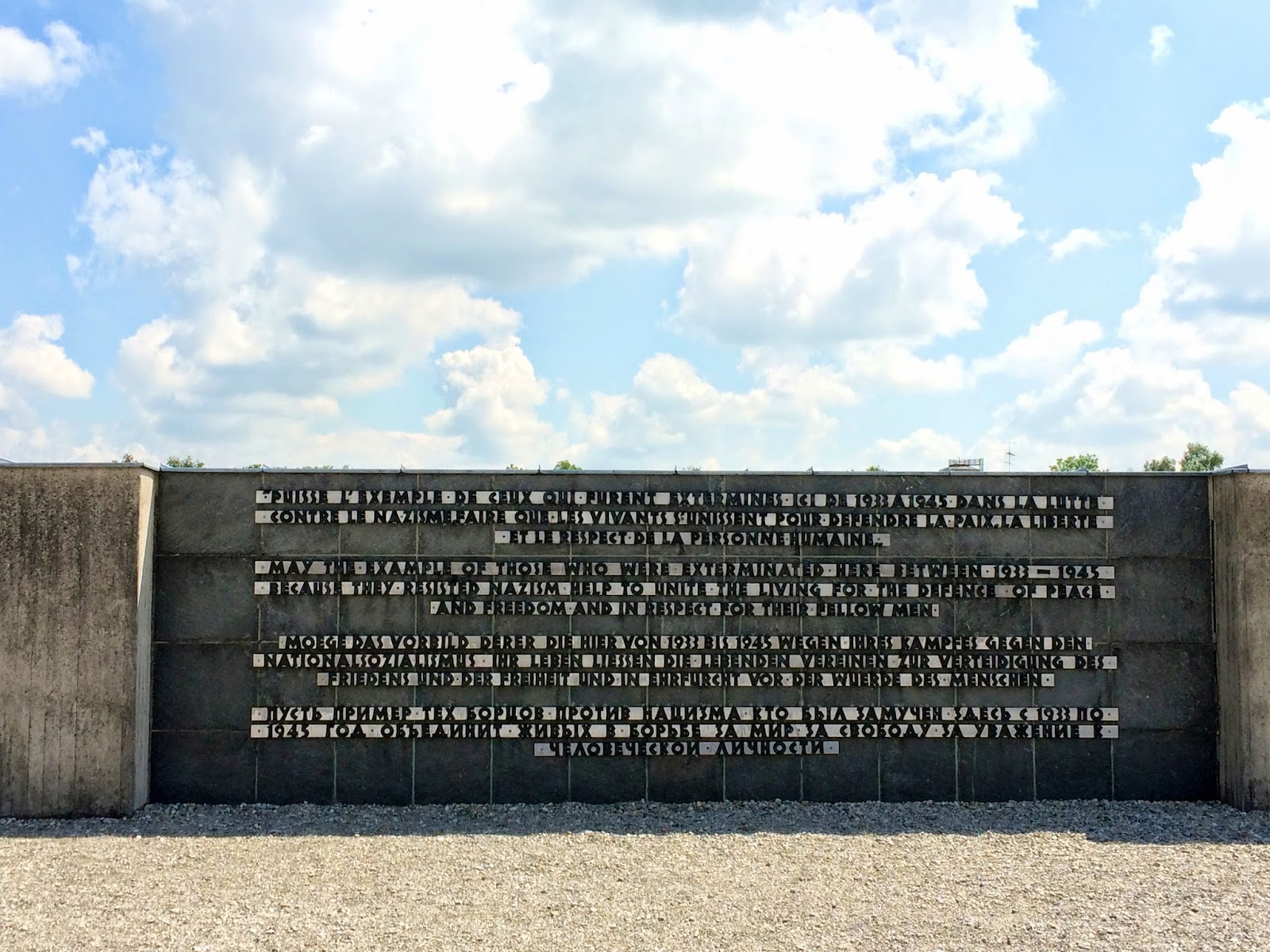 There is also a museum, providing information in both English and German about the camp in the buildings which were the bathroom and entrance hall, where prisoners had to hand over all their personal items. 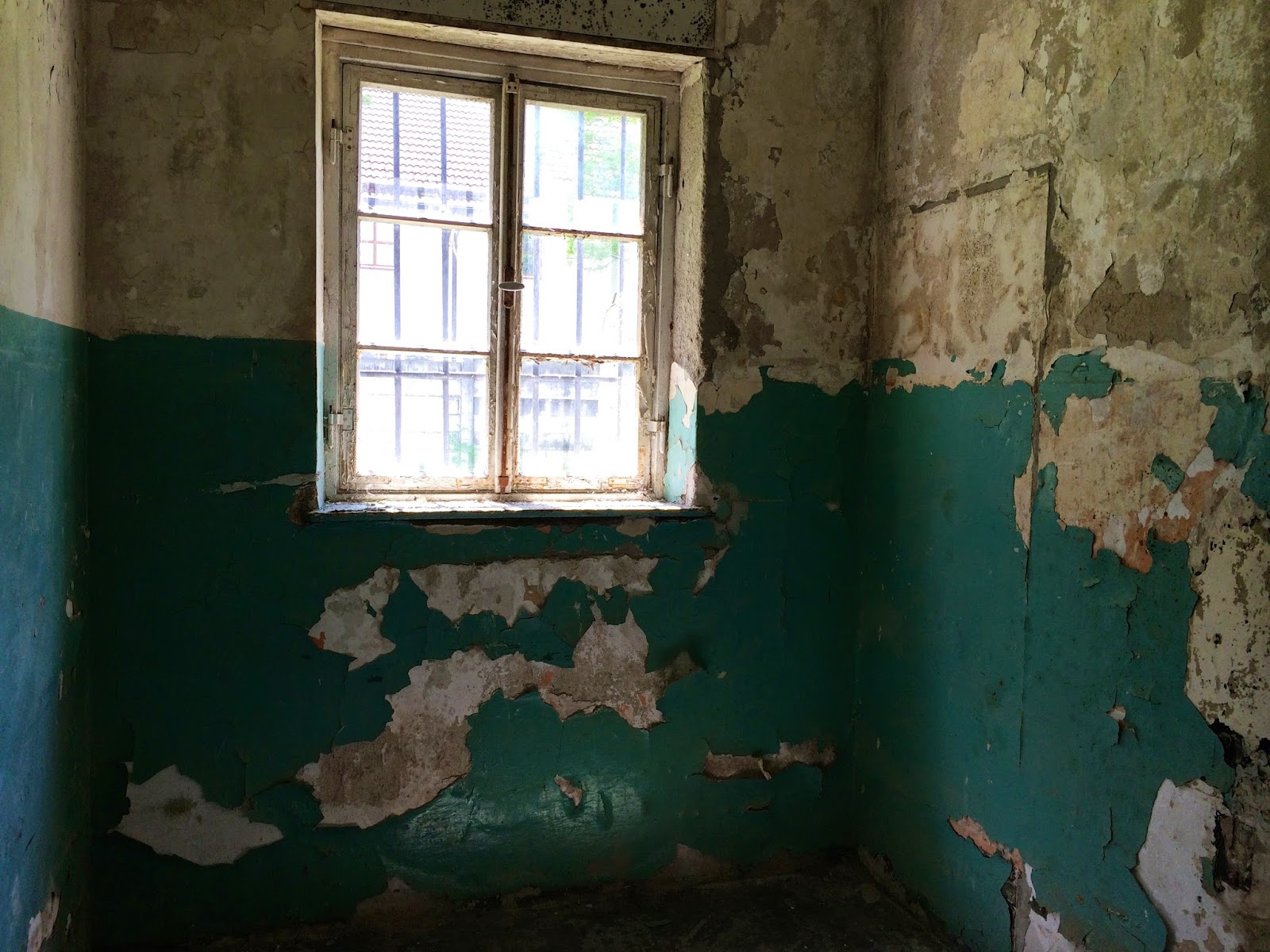 The barracks were crammed full of prisoners and their bunks - the sheer volume of people that must have been there is overwhelming when you look over all the ground markings to symbolise where the buildings were.

At the end of the barracks are a number of memorials, including for the Catholic, Jewish and Russian Orthadox.

The crematorium was built later in 1942 and was used primarily to dispose of the piles of dead bodies that accumulated in the camp. A special design was developed to remove the need for coffins and even add a conveyer belt to ‘speed up’ the process.

A gas chamber was also installed in the crematorium building to enable mass killings, but there is no evidence that this was used in Dachau.

Walking to the crematorium from the barracks you are struck by a sign which says “Think about how we died here.”

The whole place was very interesting and well-run but, of course, very sad. One of my tour group asked our guide how she copes with dealing with this topic everyday and her answer stuck with me - she said it makes her appreciate her life, that she has bread, a bed and doesn’t live in fear but that it only happened 70 years ago and we should not forget it or the people who experienced it so that it can never happen again.