Posted by The Hungry Traveller on 14:21 in Food Germany Travel | Comments : 0

To make the most of the long weekend, Mama Bear came to visit me in Germany, for a non-traditional Easter weekend.  We started on the Thursday evening with a wander around Munich, salivating at the Dallmayr counters (a Harrods-style food hall)…

…before admiring the sunset over the Munich skyline from the Greek temple in the English Gardens.

It’s asparagus season in Germany and the markets are all full of massive white asparagus, so dinner was decided!  It turns out that you have to cook white asparagus differently to normal due to their size and texture - first you peel the stems, as you would a carrot, before boiling them for 20 minutes.  We had them with wild salmon and mushrooms and they were absolutely delicious! 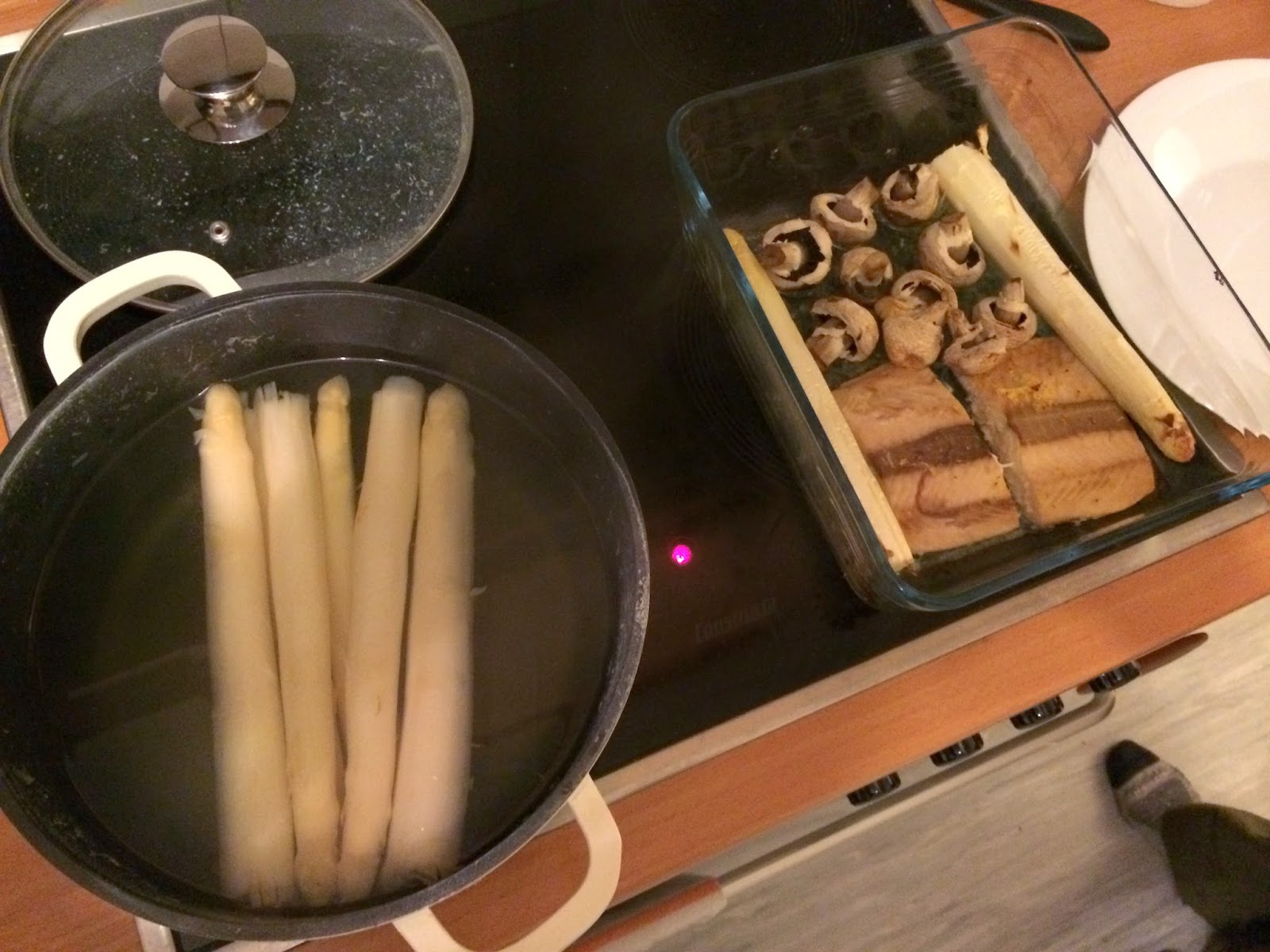 In Germany, asparagus is almost exclusively white (in fact, green asparagus is identified by it’s colour).  Having researched it, this “white gold” or “edible ivory” is the result of a blanching technique whilst the asparagus shoots are growing (keeping it covered in soil so it gets no exposure to sunlight).  In Germany the “Spargelsaison” (asparagus season) or “Spargelzeit” (asparagus time) traditionally finishes on 24 June so I still have a few weeks to make the most of it!

Good Friday morning we headed off early to drive from Munich to Meersburg, a medieval town on Lake Constance.  Lake Constance (it’s German name is “Bodensee”) is Europe’s third largest lake located on the river Rhine at the north of the Alps and sits in-between Germany, Switzerland and Austria.  On the way we drove past fields and fields of fruit trees and vineyards.

Due to the Bank Holiday, the roads and the town were quiet and we wandered around admiring the interesting and striking buildings.

Meersburg literally means “burg on the sea” referring to the town’s castle and lakeside location.

There was lots of colourful Easter decorations and also spring flowers.

To be ‘cultural’ we visited the town’s old castle, founded in the 7th century.  Positioned on a rocky edge at the top of the town, it also gave good views over the lake.

We headed off from Meersburg, pausing at the thermal bath house (which turned out was where everyone else was!)

On the map, we had spotted an interesting bridge not far from the town and, after some difficultly, we found this ‘impressive’ bridge display…essentially a few wooden bridges crossing back and forth over a stream, much to our amusement.

Then the heavy rain set in and we headed onto our hotel in the Black Forest (in German “Schwarzwald”).  The Black Forest is a wooded mountain range in the southwest of Germany, approx 99 miles long and 37 miles wide.  It’s called the Black Forest because the trees used to be so thick that from a distance they looked black.  Now it’s only a fraction of it’s original size due to logging and land-use changes.  Other than enjoying the local scenery, my three main goals were to eat Black Forest gateaux and Black Forest ham plus see a Black Forest cuckoo clock!

It turns out we were staying in a tiny village (Ühlingen-Birkendorf), where there was very little else besides our hotel, a church and a cafe!  But its location meant we could easily access a number of bigger towns around.  We had warm drinks whilst planning our next activities on the map.

The hotel explained to us that the traditional KarFreitag (Good Friday) meal is fish because it marks the end of the lent fasting so we settled in for a fish-feast!  And ‘feast’ it was - we piled our plates at the two-course buffet with every type of fish and seafood you can think of…smoked, pickled, baked, fried…

And then to finish us off, we had pudding tapas, which I somehow found room to polish off!

Whilst we were eating dinner, we saw that the weather turned from rain to sleet to snow!

On Saturday morning we woke-up to a snowy dusting across our surroundings!

After fueling up on a hearty breakfast, we headed out for a walk…

We did a 12km circuit from our village, over fields… 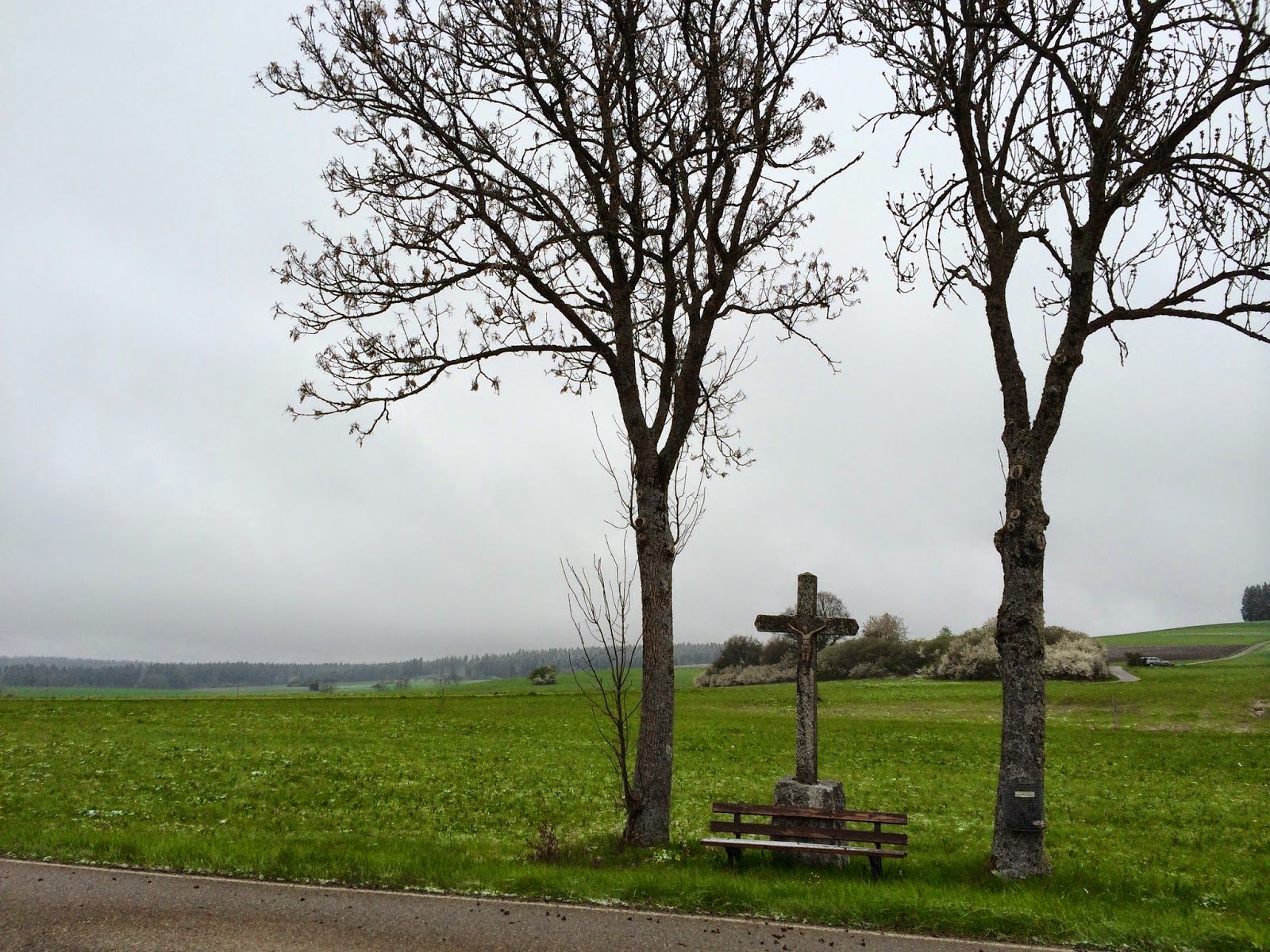 …through parts of the Black Forest…

All with striking views over the Black Forest landscape.

The 4 hour walk in the icy winds had built up my hunger again so I tucked into a piece of Black Forest ham and gateaux (in German: “Schwarzwälder Kirschtorte” - literally “Black Forest cherry tarte”) for lunch:

Black Forest gateaux has several layers of (surprisingly light) chocolate cake and whipped cream, plus sour cherries.  Traditionally (and legally!) a Schwarzwälder Kirschtorte must have Kirschwasser (a clear liquor distilled from tart cherries) must be added to the cake.

For the afternoon we headed onto Freiburg a city in the heart of the Black Forest’s wine-growing region and also acts as the primary tourist entry point to the scenic Black Forest.  I was keen to see it because it is actually the ‘twin town’ of my hometown in England (Guildford).

The city also has a unusual street side gutter system which run through it’s centre, in the summer providing a natural cooling.  The rumour is that if you accidentally fall or step into this gutter (“Bächle”) you will marry a Freiburger!

The city’s patron saint is St.George - making us English feel very at home!

We wandered around the city, taking in all the main sites… 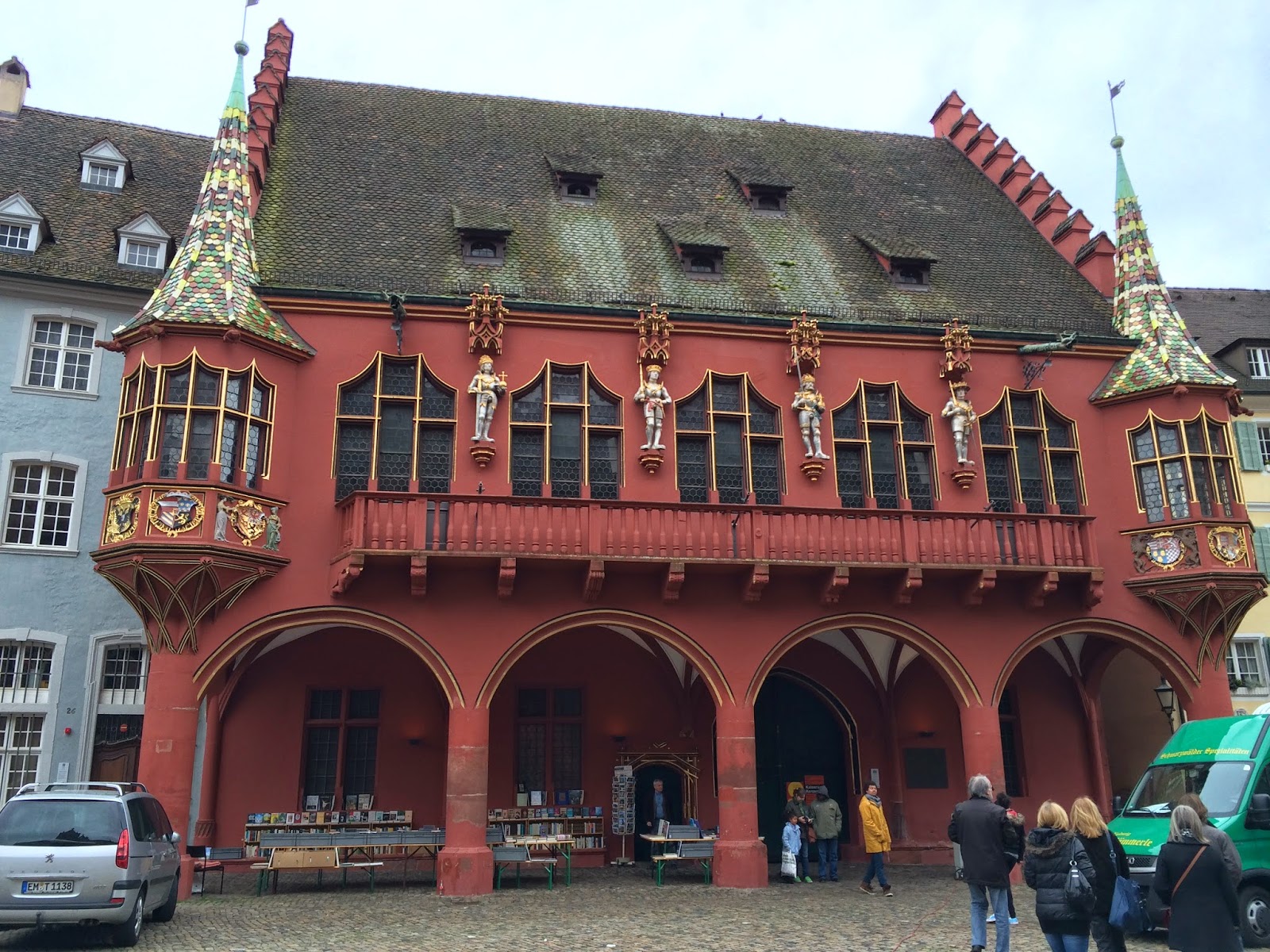 Augustinerplatz is the central square, with Münsterplatz (Cathedral Square) in the heart of the old city is dominated by a gothic looking cathedral

For dinner we went back to a cute alley called “Konvikstrasse” which had gorgeous smelling wisteria draped between the buildings.  We went to a Lonely Planet recommended wine tavern called “Englers Weinkrügle” - it was a perfect place to unwind after a long day.

Warm and friendly with a Baden-style interior, we happily sipped the local wine (Müller-Thurgau) before tucking into Black Forest trout.

They had a huge selection of sauces and accompaniments for the trout, including almond butter and Reisling, but we settled on the “Waidmanns” (huntsman) style with mushrooms - it was delicious!  I was particularly taken with the handy lemon squeezer too…

Finally, before heading back to our sleepy village we bought some Schwartzwald Kirschwasser (the local cherry liquor).

Easter Sunday arrived and we enjoyed a leisurely German breakfast before heading out on our daily adventure!

Today’s destination was Schaffhausen - a city in northern Switzerland.  Fortunately no-one was out patrolling the boarder, because I’d forgotten all ID!

We parked the car and headed straight off for a walk along the river Rhine.

We headed away from the city towards the Rhine Falls - the largest waterfalls in Europe!  They are 150m wide and 23m high.

We crossed over the river and circled around to admire the whole sight…not quite the same as my recent trip to the Iguassu Falls, but impressive none the less!

In one of the nearby shops I also spotted the final Goal…the cuckoo clock!

We walked back to Schaffhausen and admired the city’s Renaissance era buildings and interesting frescos.

The sun came out so to celebrate I had an ice cream, complete with three different types of (Swiss) chocolate…yum!

After soaking up some sunshine we climbed up to the Munot - a circular 16th century fortress surrounded by vineyards which is the city’s symbol, giving great views over the city and the Rhine river.

Leaving Schaffhausen, we headed to a little village in the bend of the river along the Swiss-German boarder, Rheinau.  After crossing a unique bridge, we had a a wander through the village…

Getting hungry, we headed back to our German village and into a friendly family-run guesthouse for dinner.

I had a tasty glass of red wine, which was served in a jug saying “Trinkt wie eure Vater aus stein” - which I translated as “drink as your father did from stone” which I assumed was a reference to the stone jug! 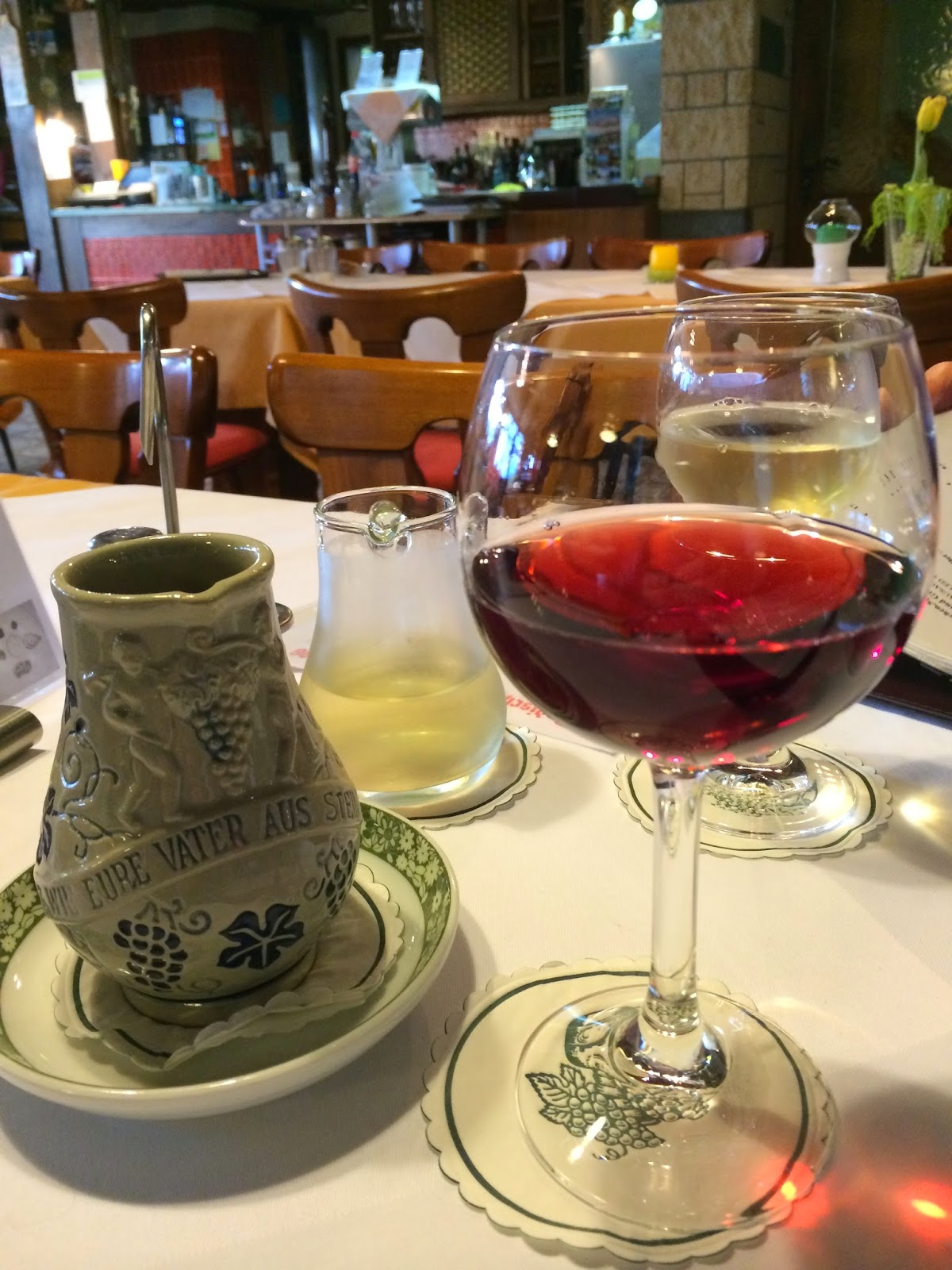 Then Mama Bear and I had cold platters of meats and cheeses, the German equivalent of a “Ploughman’s” - exactly what we felt like after our fun day!

This time we did a 11km trek taking in villages, a logging farm and some great views over the landscape.

Leaving the Black Forest, we headed back to Lake Constance.  We stopped at Hagnau am Bodensee, a village right on the lake front.  Despite the Bank Holiday, we were delighted to discover an open bakery almost immediately.  I opted for a bunny shaped brioche (in honour of the festive occasion!) and Mama Bear went for the traditional Bavarian combination of pretzel and cream cheese which we ate looking over the lake.

We took a walk through the village which is located in the heart of the fruit and wine growing area.

Some massive strawberries beckoned for dessert…they were so sweet and delicious, despite the early time of year!

Time for a cheeky sit-down...

And then our mini vacation drew to an end as we headed back to Munich, finishing off a great Easter break with some more white asparagus, courtesy of Mama Bear!