Posted by The Hungry Traveller on 20:33 in Food Germany Travel | Comments : 0

After a busy week, I started the weekend with a full body massage on Friday night after work…then continued my self-indulgence into Saturday! I had planned to visit the Munich Residenz (museum / palace) but got a little distracted by shops and food - of course!


I headed down to Marienplatz for just before 11am where there were hoards of people gathered to watch the 'Rathaus-Glockenspiel' (New Town Hall) performance on the hour. It only plays at 11am and noon daily (plus 5pm during the summer) so is a must-do stop on many of the tour group routes.

There are 43 bells and 32 life-sized figures which re-enact two stories from the 16th century. The first story is on the top half, depicting the story of the marriage of the local Duke Wilhelm V to Renata of Lorraine.  There is a joust in their honour with the Bavarian knight winning! 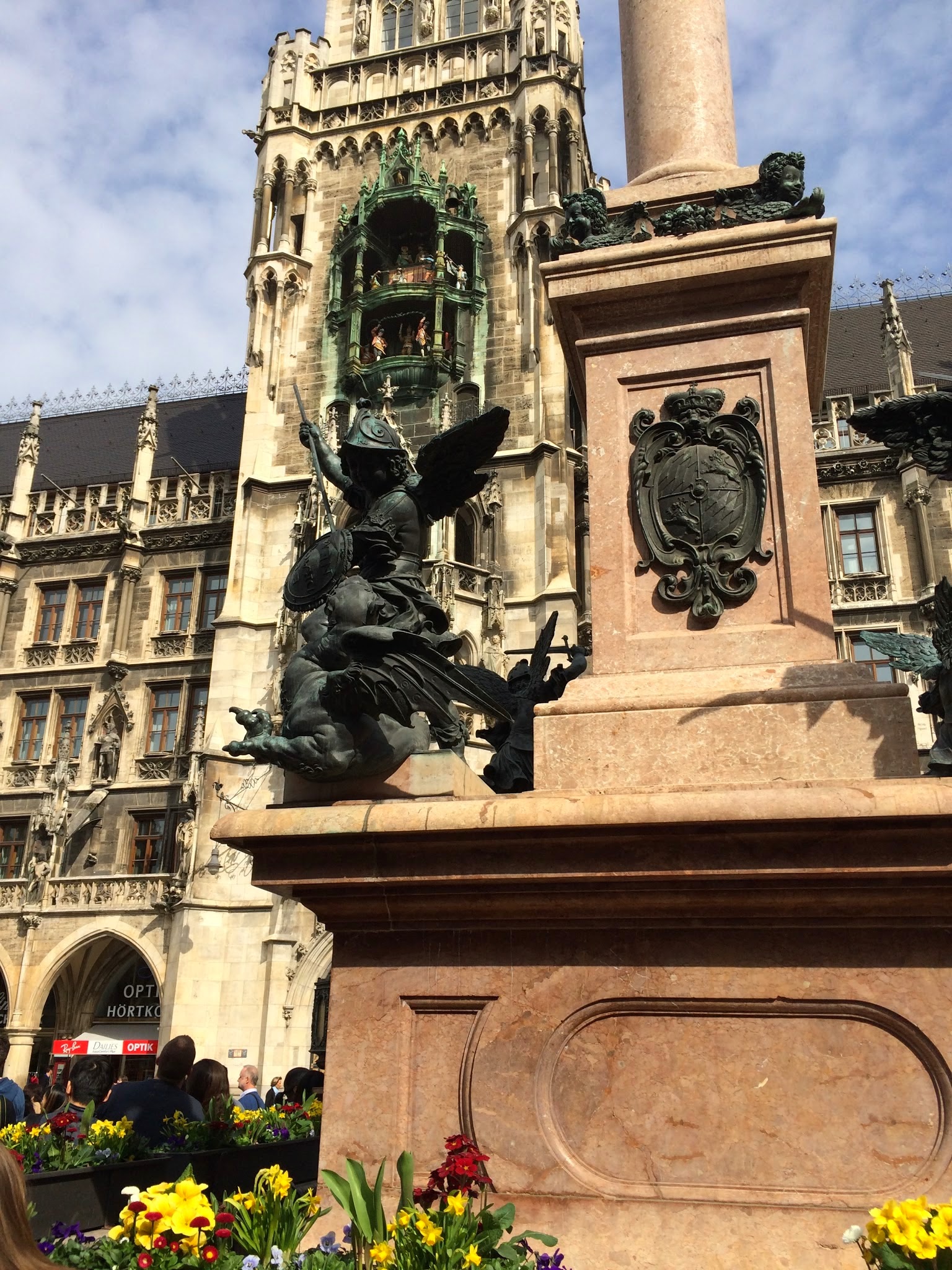 The second story, in the bottom half, show the coopers's dance - apparently they danced to help "bring fresh vitality to fearful dispositions" during the Munich plague in 1517.  This dance is traditionally performed in Munich every 7 years to symbolise perseverance in difficult times - in Fashching (next in 2019).

After the show I headed to the shops…treating myself to a few spring-time purchases and wandering through the streets packed with people - I even spotted a C&A!

Then my stomach signalled that it was feeding time again so I headed to Glockenspiel Cafe which is on the 5th floor of a building opposite the Marienplatz clock tower with a great view down over the whole square. The entrance is hidden next to the apple store (which also means you get free wifi inside -something I have discovered is pretty unusual in Munich!)


All the outdoor seating was taken so I settled into a table inside but facing the tower.

I ordered a coffee whilst perusing the menu - a ‘cafe Glockenspiel’ which was a piccolo latte macchiato with hazelnut syrup…deliciously nutty and not too sweet.

I love brunch - its one of my favourite meals of the day…along with Afternoon Tea! Cafe Glockenspiel offers breakfast / brunch until 16:00 so I happily chose the ‘Glockenspiel Fruhstuck’ which I can only describe as a feast!

Faced with such a yummy looking platter, I didn’t know where to start! But I kicked off with the fruit & yoghurt to ‘warm’ me up for the feeding ahead…

Next up was the fish and meats section…

Then it was dippy egg time…so good!

Followed by bread & jam - the jam was deliciously sweet and full of fruity pieces…almost good for you, I’m sure!

I nibbled a little of each of the cheeses, but I’m really not a cheese-fan

So then it was onto the fruit to finish me off..

The German food portions are very generous, but I did pretty well with the food…only the cheese and horseradish sauce was left.

I’d spotted the amazing looking cakes when walking in, but unfortunately had used all available stomach space…definitely worth an afternoon trip one day to sample though!

Inside the building is interesting too…check out the impressive light - made from cutlery and crockery!

Leaving the cafe, I walked through Marienplatz ad under the arch under the New Town Hall to see the small courtyard inside.

Most of the basement of the building is the large Ratskellar restaurant, which is on my "To Eat At" list.

After a little more window shopping I collected my bike from the hundreds ‘parked’ up near the square and tried to cycle off my breakfast banquet!