Due to the gale-force winds and heavy rain, there was varying amounts of destruction throughout Surrey. I woke up on Christmas Eve to see one of our neighbour’s trees has fallen down into the garden across the road, blocking the entire street. 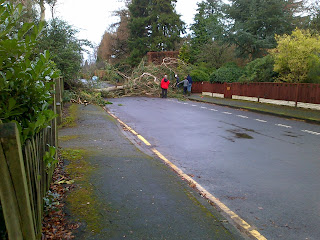 I went out to offer some help – carrying branches that had been sawn off to the side. And was even given a saw of my own to use (though it turns out I’m no good and it gave me a blister!).

What was so nice was that throughout the morning various neighbours and their kids came out to help – everyone bringing tools that they had to hand (saws, axes, 4x4s with tows) to help clear the massive Eucalyptus. Teas, coffees and waters were offered out and everyone was in high spirits.

It was great that despite the cold and the inconvenience, everyone just mucked in and helped out. The tree was still on the side of the road a week later, waiting for the council to turn up!

Also wandering through the town, I saw huge amounts of flooding which was terrible, so many people's homes (and Christmases) were affected...