The day I found the perfect cupcake and jeans!

This morning I caught a bus back to Georgetown where I spent the morning shopping!

There were lots of the usual big stores, such as Abercrombie and Nike, but also some cute boutiques off the main street, including a trinket trove called ‘lou lou’ where I stocked up on accessories.

Then I went to a premium Levi’s store when I was ‘curve analysed’ and found the perfect pair of jeans by a highly enthusiastic member of staff.  I may never buy jeans anywhere else ever again!

He then recommended a cupcake place called ‘baked & wired’ around the corner.  It was absolute heaven.  In my dreams of owning a coffee and cake shop, this is what it would be like.

The cupcakes were huge and I opted for the ‘flapjack’ which was a pancake flavoured sponge, topped with maple syrup icing and sugared bacon bits.  Absolutely delicious and perfect ‘brunch’.

They also encourage you to design something on a napkin and attach it to their wall which I dutifully did. 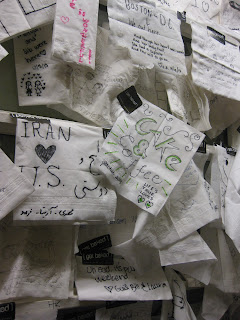 After more shopping, I then had a lunch of Pinkberry icecream, choosing the seasonal pumpkin flavour with graham cracker bears on top.

I then visited the famous ‘Georgetown cupcakes’ for a peak but it had nothing on my previous selection so wandered onto the famous steps from The Exorcist movie.  Then walked onto Georgetown University for a look around the campus.  It felt very like Boston College where I studied.

After grabbing a free university bus I then headed to Arlington Cemetery.  The fall colours were so striking as was the amount of brilliant white grave stones lining the fields.  I visited the eternal flame by President Kennedy’s grave.

Then caught the metro (getting very excited by the amount of Pentagon staff joining me!) onto U Street to have dinner at the famous Ben’s Chilli Bowl.  Not only is it long-standing DC eatery and a Man vs. Food location, but it’s also frequented by Bill Crosby and President Obama.

I opted for the traditional / original ‘half smoke’ dog which is half pork, half beef covered in chilli with a side of cheese fries.  A proper fatty dinner!

To help digest my ‘healthy’ dinner I walked by to the hostel, admiring the Halloween decorations on the way and stopping at a supermarket to pick up some Dunkin’ Donuts coffee (a favourite from my Boston days) as well as some random American snacks.

I always feel envious at the amount of variety the states have with some of my favourite brands, but then it’s probably for the best at home!