Posted by The Hungry Traveller on 15:35 in Food South America Travel | Comments : 0

Despite the early morning drizzle, some of us opted to go for a cycle tour around Montevideo.  It was good fun, we saw the football stadium and also cycled along the promenade.  It was fairly flat and good to get up and out.  We cycled approximately 15km to the port, via the ‘nice’ and wealthier part of town by the beach, Pocitos. 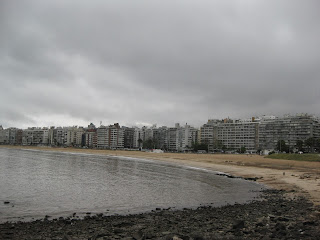 The city felt very Eastern European overall and little run-down but with lots of interesting graffiti. 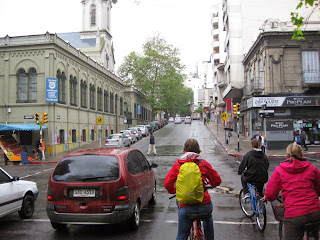 Then we had lunch in a market hall where there were large BBQ grills in steakhouses “parrillas” and a tango lesson taking place next to us. 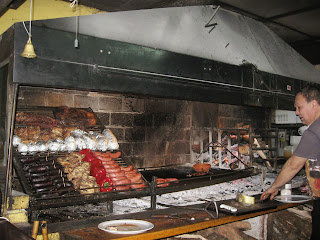 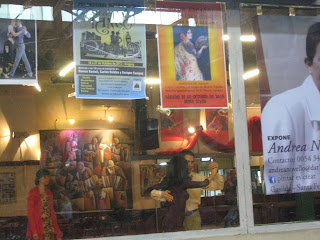 I had a large salad as was craving some fresh vegetables after the onslaught of meat over the past couple of weeks. 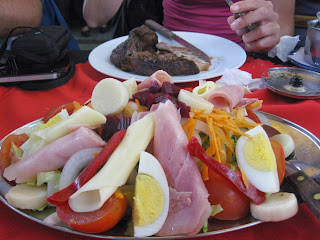 After lunch with went with a local NGO guide to Barrio Sur, the centre of Montevideos African Uruguayan community.  We joined in with what felt like Notting Hill carnival, as they were having lively processions celebrating their history through the unique sound of ‘candombe’ which is a strong rhythm of drums, dance and tambourines.  They have one of the biggest carnivals in the world and we were lucky to get a taster of that on a Saturday afternoon.

We travelled back via the ‘Fuente de los Candados’ on Avenida 18 de Julio (formally ‘Fountain of the Love Padlocks’).  Despite the unromantic location on the busy commercial street, the fountain is decorated with hundreds of locks depicting lovers’ initials.  The fountain plaque explains “The legend of this young fountain tells us that if a lock with the initials of two people in love is placed in it, they will return together to the fountain and their love will be forever locked”.

For dinner we went back to the market hall where I had “medio y medio” (a mix of wine and sparkling wine) plus grilled fish.

All of a sudden, people around us started tango dancing around the hall.

Then a couple of the girls and I went for drinks in Pocitos – our vodka lemonades were made with freshly squeezed lemon juice plus sugar and vodka!  However, despite it being a Saturday the city was fairly quite so we headed back around 2am (ready for our 6am get up!)